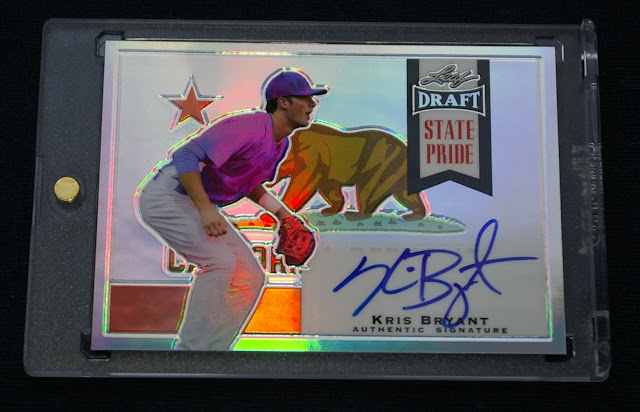 I picked up this Kris Bryant auto a couple months ago but I didn't post it right away.. Something told me to hang onto it for a couple months so I'd have a sweet card to post about once the Cubs finally did it.

And then as noted in my previous post, back on the morning of October 8th, I picked the Cubs over the Indians in 7 for Collector's Crack's contest.

It was a close one, but yep, the Cubs pulled it out in a tight Game 7!  I didn't get home from work till 11pm because I was watching the game in the lunch room on the big TVs.

My work had a little "happy hour" party in the big break room area on this day starting at 4. Someone was kind enough to put the WS game on at around 4:50 (just before first pitch). I ended up watching the whole game at work. It takes me about a half hour to commute home on the Max (commuter train), and I didn't want to miss anything. My wife was cool enough to hang with me for a while (She works where I work and helped me get hired), but left around the middle of the game to come home and let our dog out to go potty. So for the second half of the game it was basically just me, and maybe one random lady who wasn't paying attention, in the lunch room watching the game on the big-ass TVs they've got. Eventually it was only me left at the end. While it wasn't the comfort of home, it was still pretty sweet, and I was hopping around a bit at the final out. Oh, and work supplies free beer, so it had that going for it too. I was nervously throwing them back, can't lie.

Thankfully it's a slow work-week for me and I had the foresight to request Thursday off, so I didn't have to worry about getting up early.. Slept in, nursing a hangover.
Plus I was expecting a shipment of baseball cards..

It was a nerve-racking game, but Chicago ended up on top. As I've said before, I'm born and raised in San Diego, but my extended family is originally from Chicago, so I felt the weight of my ancestors lifting as the Cubs hung on for the victory. Sky-point to my late grampa who didn't live long enough to see this.

Oh, and another big baseball thing that happened for me yesterday is I completed 1971 Topps! I don't technically have all the cards in-hand yet, though they've all been bought now, with this eBay win securing the last card I needed: 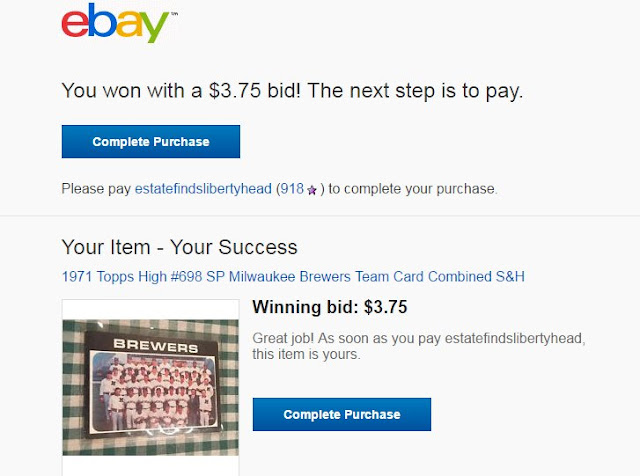 Yep, the Brewers team card was the final piece to the puzzle for me bringing the original black-bordered beauty to rest snugly in my collection. Over the next month, the cards will show up and it'll be official, barring any oversights on my part.

But yeah, anyways, back to the Cubs...

Here's my Kris Bryant PC in all its glory as it stood the moment the Cubs finally won it all. 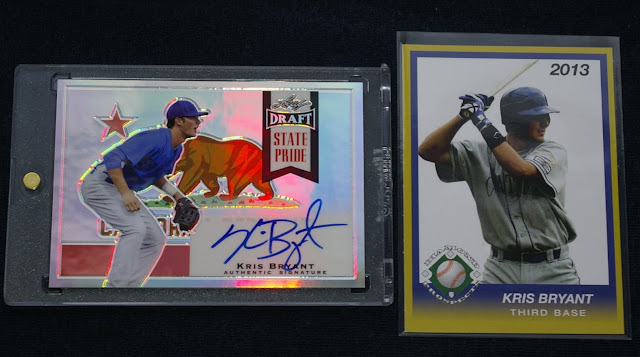 2013. I love that auto! As a Californian, the state flag on the background is a nice touch for me. Kris is actually from Vegas, but went to college in San Diego.. a fact that gives me hometown pride, even though he went to USD, not my alma mater (SDSU). I actually took a prospective-student tour of USD when I was a high school senior. It's a fabulous campus. Ultimately, I felt a little intimidated by it all and decided it wasn't a fit for me (further away from my home, more expensive, tougher academically). Anyways, back to the auto, I was looking for either 1) on-card but unlicensed or 2) licensed but stickergraph. (Sure, licensed on-card would be ideal, but will cost you.) I'm happy with my choice. Maybe you heard the news today that Bryant just signed a huge deal to sign exclusively for Topps. Meh, I got my auto already and don't plan to invest in more at this time, so it doesn't concern me too much. I just hope it doesn't cause prices on Topps packs/boxes to get jacked up. 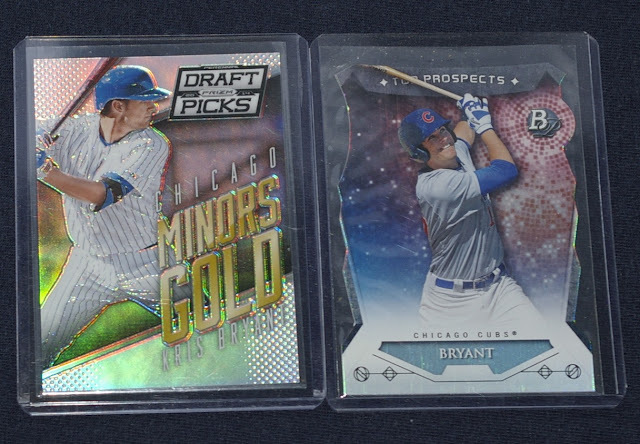 2014. The Prizm was a recent pull by me. I think the diecut was my first-ever Bryant card, picking it up from the dollar bins at the card show a couple years ago. Still need his first Bowman card. Recently threw it on my sidebar wantlist. 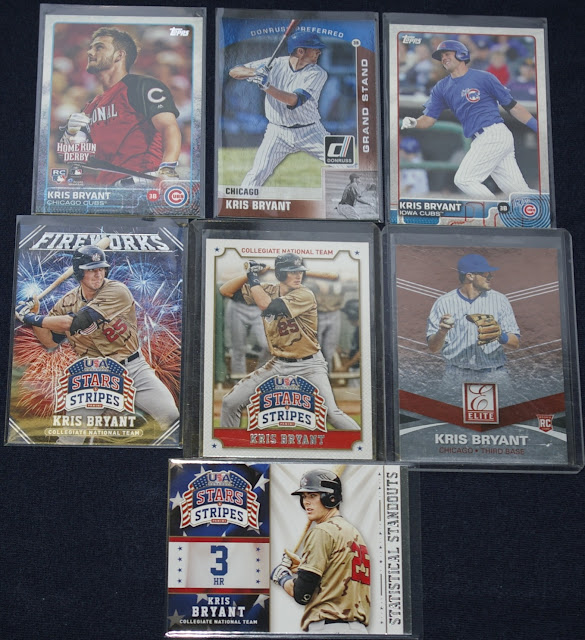 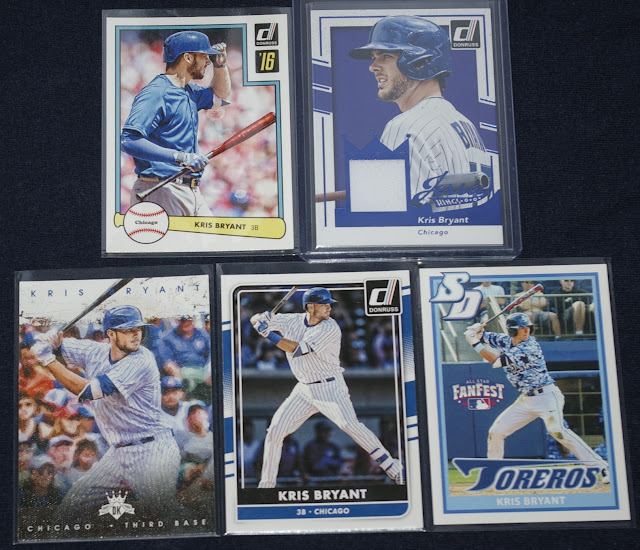 2016 - part 1: Non-Topps cards. I like that relic card, even though it's a boring plain white swatch. The Toreros card was a giveaway by USD at the All-Star Fanfest in San Diego. 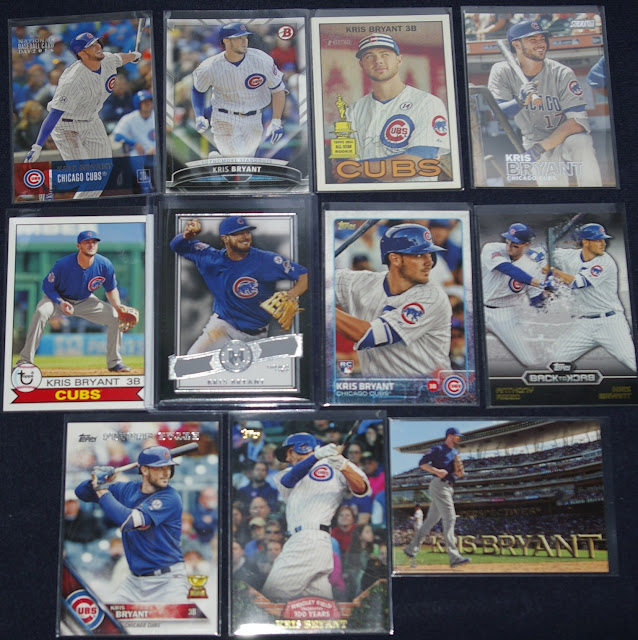 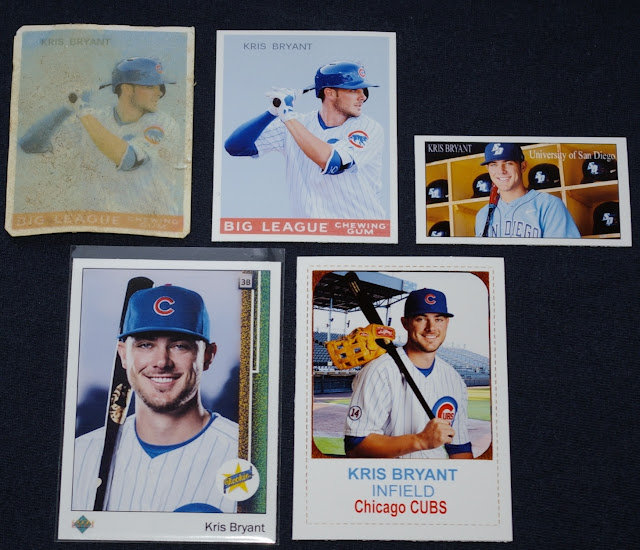 Customs. Yep, I've made several Kris Bryant cards! I've got lots of Cub-collecting trader buddies, so it's nice to have some fun "exclusive" cards to spread around to them.


So there you have it, my Kris Bryant collection.
Thanks for checking it out!
Posted by defgav at 3:59 PM