In a moment of delirium: rolling the dice once again on high-end boxes 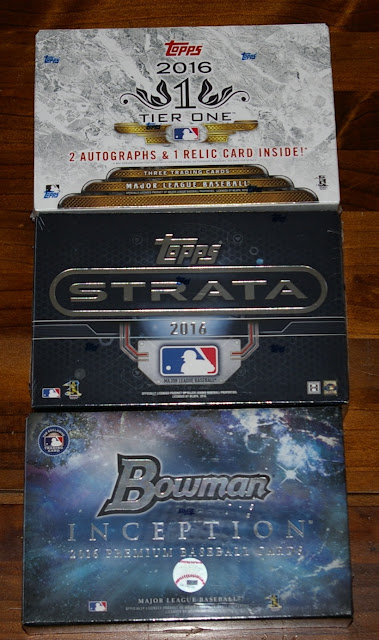 Even before these boxes arrived, I realized I need to stop blowing money on high end boxes. I got a pretty good deal on these boxes from Dave & Adam's, coming in just a tick above the free-shipping threshold.

Jimmy Paredes - Nice looking card, but at the end of the day, he's just a competent 4th outfielder.

Carl Edwards, Jr - this is a fine pull.. Fine. WS champion, and all.. but Topps has ridden his arm into the ground as much as Joe Maddon ever could, with several thousand autos put out over the past few years. Making this otherwise sweet card not worth much thanks to oversaturation. I'll likely end up sending it to Andy, hitting him back for his latest trade package.

Josh Harrison - this is a fine relic, though not super exciting. It'll walk the plank soon.

And there's 70+ bucks for ~seven bucks worth of cards. #thankstopps

Next up is the 2-card Strata box.

Ugh. Pitchers.
Cool looking cards, but can't get excited about these guys. Just got a Keuchel auto a couple weeks ago; didn't need another one. Brian Johnson spent most of 2016 in AAA. A 1st round pick by the Sox in 2012, he's been ok in the minors, but this card isn't really worth much.

Neither of these cards is even numbered. I threw them both into the garbage on sight.

Next up is Bowman Inception. Hot rookies abound, right?!!

Ozzie Albies - He's a decent middle-infield prospect for the Braves. Performed well in the minors before getting a little tripped up in AAA last season. But at only 19, he's probably a safe bet to crack the majors in a year or two.

Blake Snell - Schnell, schnell!! I kinda-sorta collect him, so this is one "win" for me here. Though why such a small signature? And it's on-card, so it's not like he has to shrink it down to fit on a sticker! And the photo has got a weird (turtle-alien) look on his face. Oh well, this is the one card in the post that isn't available for trade to an interested party. He made his MLB debut this past season and pitched pretty decently for the Rays after a great previous year in the minors.

Justus Sheffield - Hey, it's another guys I've heard of, at least. He went to the Yankees in the Andrew Miller trade. He had a pretty solid 2016 season, making his way up to AA at only 20 years old. He'll probably make the bigs one of these days. 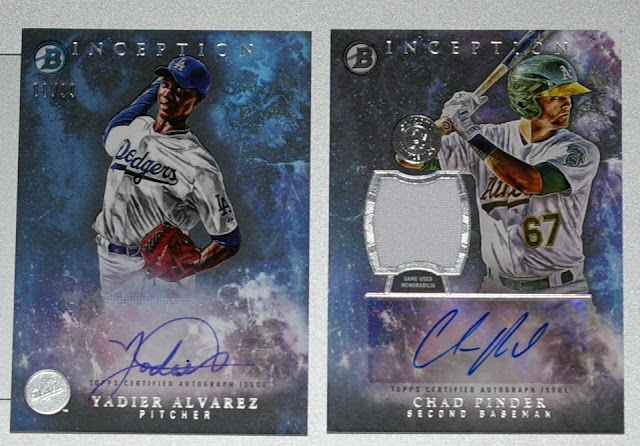 These are the "hits" of the Inception box. Yadier Alvarez, the $16 million crown jewel of the Dodgers’ 2015/2016 international free-agent class, is a Cuban signee who's pitched very well in the low minors so far (In 59.1 innings this past year, he had 81 strikeouts with just 21 walks and 1 HR allowed). His cards aren't burning up eBay, but this /99 auto might turn out to be a sweet pull in a couple years. I guess I'll hold onto this card for now unless a Dodgers fan has something pretty nice to offer to pry it away from me.

Chad Pinder was a 2nd round pick in 2013. He's ok, but won't blow you away. The 24-year-old middle-infielder got called up last August and got into 22 games for the A's. Why's it gotta be so hard to get on-card autographs on a relic card? It's the only stickergraph in the lot.

And my "bonus gift" from the order...

I ended up with 4 sets of this 4-card Leaf VIP promo pack from the 2016 National. Plenty of each of these to trade, if anybody's interested.

Anyways, yeah, this order was $200 pissed away, for sure. I'm swearing off high-end boxes for a good long while (though I may throw a couple on my Christmas list). Also, if Topps or Panini (or whoever) would like to send me free boxes to review on my blog (HTF did SCC get so lucky?! Not fair!!), I'd be more than happy to oblige.

Thanks for reading!
Posted by defgav at 12:47 PM