I'm gonna go ahead and close the entry period on my latest contest rather than drag it out too much. Thanks to all who entered! Lots of new, unfamiliar names, I'm assuming finding their way here via Twitter retweets. As far as guesses for the next Guy From Granite to make the majors, Travis Taijeron was the clear favorite, though John Omahen saw good support late, and Andrew Brown got some underdog picks.

Here are the entrants in chronological order of their comment:

Just a heads up to those who might be unfamiliar with my contests, what I typically do is randomize the entrants to "assign numbers" to them, then use the outcome of a sporting event to determine who lucks into the winning number. I find it adds extra randomness and excitement.

Ok, let's do it. Again, the below list is not selecting a winner here, it's only assigning numbers. 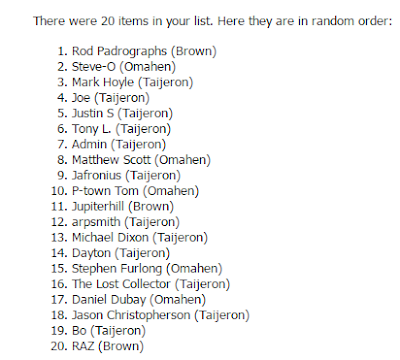 The winning number will be the combined number of hits for both teams in tonight's WS Game 6 Cubs @ Indians.
Anything over 20 will loop back around. For example, if the teams combine for 21 hits, Rod would be the winner.
To refresh your memory, the prize package up for grabs here can be found near the bottom of the contest post.

Best of luck to everybody!


Switching gears and adding some more substance to today's post...
I was a little cranky with Topps the other day in part thanks to a Topps Vault order mix up. First I won a Nate Colbert slide (which I'll feature in an upcoming Nate Colbert Report), then I waited a couple days before paying to see if I could land anything else with my order to combine shipping.

I specifically had my eye on the 2016 Topps Heritage High Number 1/1 blank back for Gavin Floyd. I originally watched it end with no bids ($9.95 opening bid) in its initial auction. Then, as is Topps Vault's MO, it was relisted at $11.95 Buy It Now. After a week or two of no takers, there was a sale taking it down to $5.97. That's when I pounced, and grabbed a couple other discounted 1/1s while I was at it.

Then when the package arrived, everything was good with the other 3 items, but instead of the Gavin blank back, there was a Dillon Gee instead. I checked the completed items and saw that the Gee had recently been bought, too.

I sent a message through eBay about the mixup. They at Topps Vault were nice about it, and luckily for me they still had the Gavin on hand, and were able to send it out to me. I was able to return the Gee with eBay's pre-paid postage, no cost to me. And soon thereafter, blank Gavin arrived. 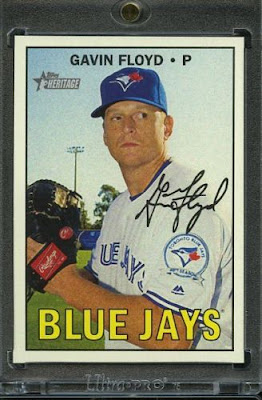 While these online-exclusive blank backs are pretty gimmicky, I was happy to add another 1/1 to my Gavin Floyd PC at a decent price.

That's it for this time. Thanks for reading.
Posted by defgav at 4:12 PM