New Years post of goals, grades, and a box break 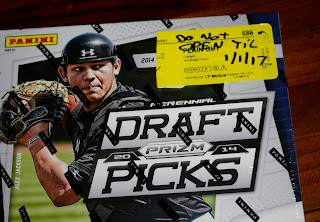 - Every year my #1 collecting goal is the same: to have zero bobbleheads in my collection. How'd I do this year? 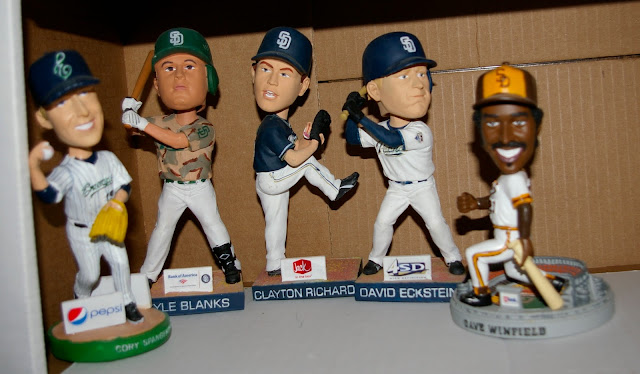 I failed! Rod saddled me a few bobbleheads and I haven't cast them away yet. (Just teasing here; I'm very grateful for being on the receiving end of Rod's generosity. That didn't sound right, but you know what I mean.)
Goal: Have no bobbleheads
Grade: F

- In 2015, I completed 1973 Topps, the first vintage set I ever completed. I nearly followed that up by completing 1971 Topps in 2016.. and I thought I had.. but then when I went to sort and collate it all out, I found myself one card short. I've already snagged it off COMC, though, and it should be in-hand shortly. So stay tuned for that upcoming post. But yeah, that goal didn't quite make it in time for the 2016 cut off. That's ok, because I don't tend to worry about collecting goals like that. It'll happen when it happens, or it won't. That said, by the end of 2017, perhaps I'll have finished 1965 Topps. That'd be cool. If you had to wring a 2017 collecting goal out of me (other than no bobbleheads), it'd probably be that (..with 1964 penciled in for 2018, then 1957 Topps in 2019, then I'd have finished all the vintage sets I want to complete. Though if I feel the itch after that, I could possibly see myself going after a late 70s or early 80s set, but no more true vintage.)
Goal: Complete a vintage set I love
Grade: A-

I'm also tantalizingly close to my goal of completing the 2004 Topps Retired autos, with only 2 cards to go (though I also want to upgrade to refractor parallels of them all, and I've still got quite a ways to go for that ultimate collecting goal of mine.)
Goal: Make good progress on 2004 Topps Retired
Grade: A

- My post total on Baseball Card Breakdown was down a little in 2016. After 283 posts in 2014, and 280 in 2015, I was down to only 254. I think the drop was just because I didn't necessarily feel obligated to post every day. Some days I just don't get around to drafting up a post, and I no longer stress out over squeezing a post out when I'm busy. And sometimes a post doesn't get the number of views I think it deserves, so I don't post the next day out of spite. lol
Goal: Post about as frequently as in years past
Grade: B

- I haven't posted about my favorite card of the 2016 because I haven't gotten it yet. But it's supposed to arrive soon via FedEx. Very excited for it!
Goal: Pull a super sick mojo hit.
Grade: A+
Goal: Successfully redeem said card.
Grade: (incomplete.. F for 2016, but early 2017 is looking A)

- Maybe you remember, I bought a bunch of hobby boxes on sale Black Friday with the intention of doling them out over the year. So far I've been good and patient with them. They're all labeled and hidden away out of sight. I guess a goal for 2017 is to stick with my schedule of spreading out these boxes, and not buy more boxes other than the couple I've been planning on getting.

Let's crack open January's box. It's one of the several boxes of 2014 Prizm Draft on tap for me this year. Each box usually gets you four on-card prospect autos, so for less than the price of a blaster each, I had to grab up a few of them. My hope is to pull a Trea Turner and/or Kyle Schwarber auto, but there's plenty of other good stuff to hope for in there. 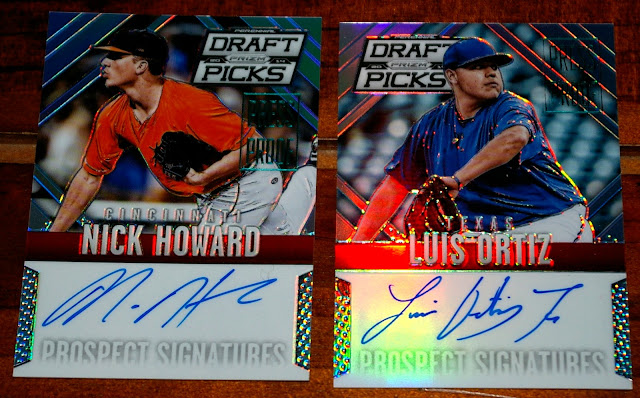 I scored a pair of Press Proof parallel autos. Honestly, that's my least favorite parallel, as it's just a base refractor but with a dumb stamp on the side, and numbered /199 on the back. Not familiar with these guys, but let's look 'em up... Nick Howard put up an ERA of 7.58 in 2015 and followed that up with 8.10 in 2016. Next! Luis Ortiz went from Texas to the Brewers in the Jonathan Lucroy trade. His numbers look pretty decent, putting up a 3.08 ERA last year, mostly in AA. And yeah yeah, I know I still use arcane stats like ERA and wins to judge a pitcher, rather than much more accurate metrics that are used these days. 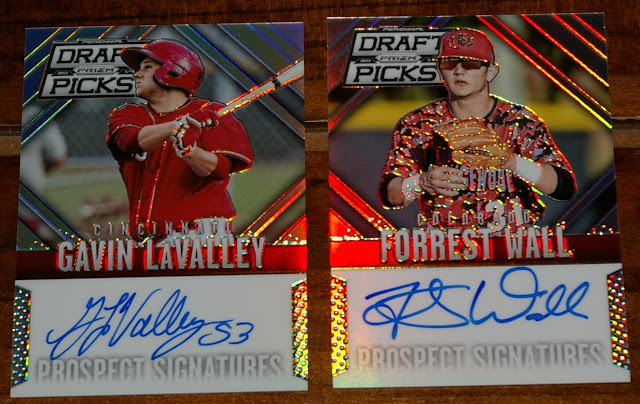 Ha, Gavin LaValley. I've got a ton of his cards, but I think this is the first one I've ever personally pulled from a pack. I've already got this base auto (and nearly all the parallels of it), but still a cool pull for me. As for Forrest Wall (great name!), he was the 35th overall pick of the 2014 draft. Nothing extraordinary, but he's put up decent numbers in the minors so far. 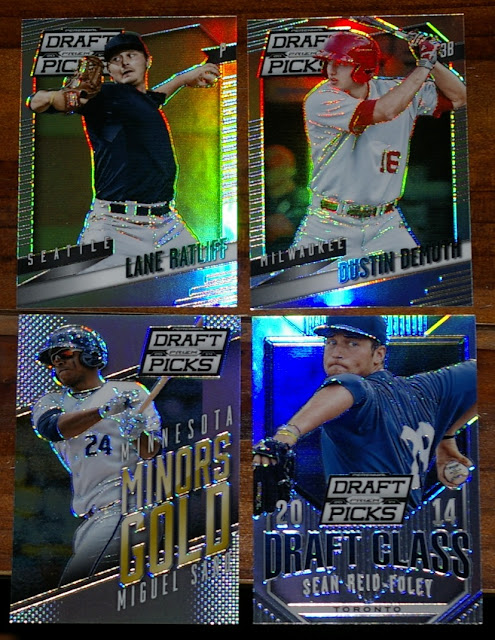 As far as regular refractors, Miguel Sano is a decent one to pull from the one-per-box Minors Gold inserts. 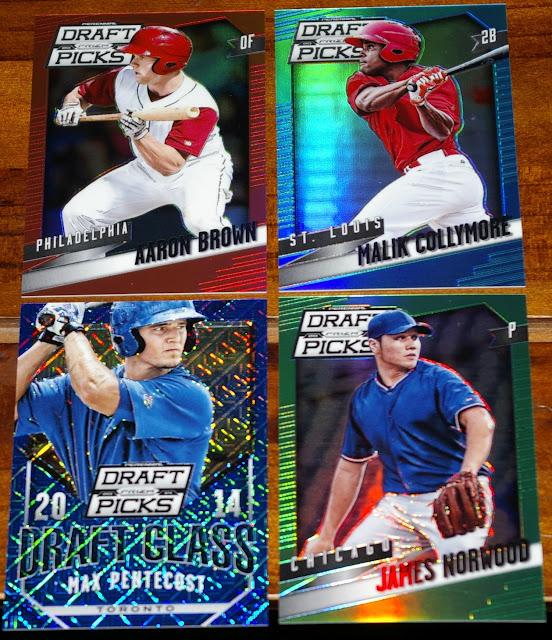 The colored parallels are always the highlight of any Prizm product. Thanks to the 2 auto parallels being Press Proofs rather than color parallels, these 4 are the only color from the box.. kind of a bummer. Reds are /100, powder blue /199, electric blue /75 (these look pretty neat), and green /35. 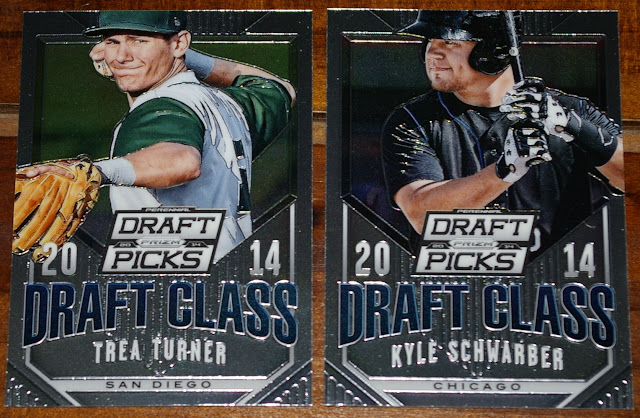 As far as base card highlights, I pulled the 2 aforementioned big names. So that's cool, I guess.
Goal: Pull some great cards from this box of 2014 Prizm Draft.
Grade: C