I had a grocery store coupon for "$10 off when you spend $40"... Which for us card collectors translates to "Buy 1 blaster, get a 2nd blaster for ½ off." The past couple weeks, they didn't have any interesting baseball cards available and the coupon went unused (booze was not applicable for the coupon, sadly). But this past weekend there were a few 2017 Topps Heritage High Number blasters and 2017 Bowman Mega Boxes. Good enough for me! I grabbed one of each. 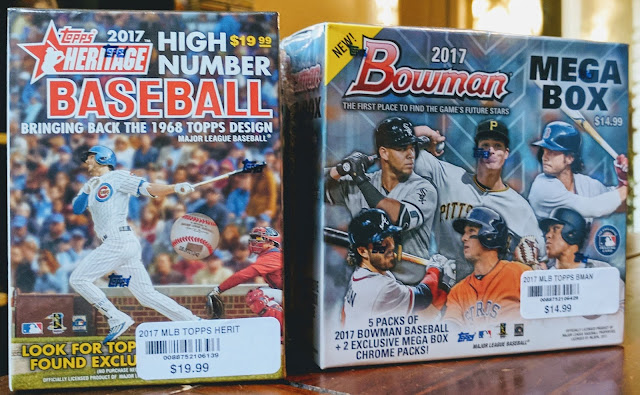 The Mega Boxes are only $14.99 (not quite a full blaster), but after a gallon of milk, a box of cereal, and a few jalapeños, I was over the $40 total and in the clear for my ten bucks off.

Were the boxes good to me? Yes, they were pretty solid! Let's check out the highlights... 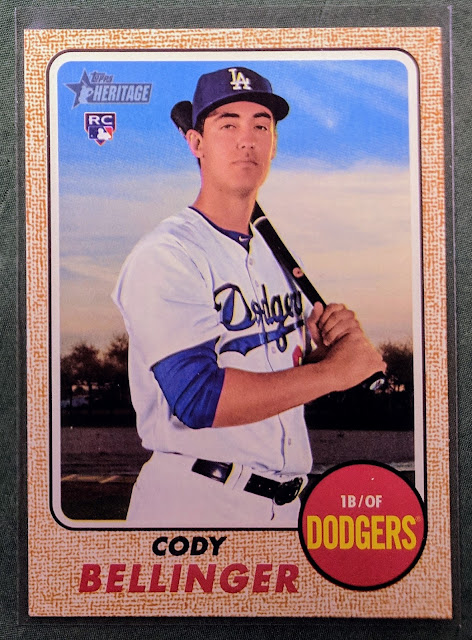 Hello! Commander Cody is the best base card you can hope to pull from '17 HHN, so I was happy to land it in the 2nd pack. NL rookie home run record breaker. Juiced ball or not, gotta respect that! 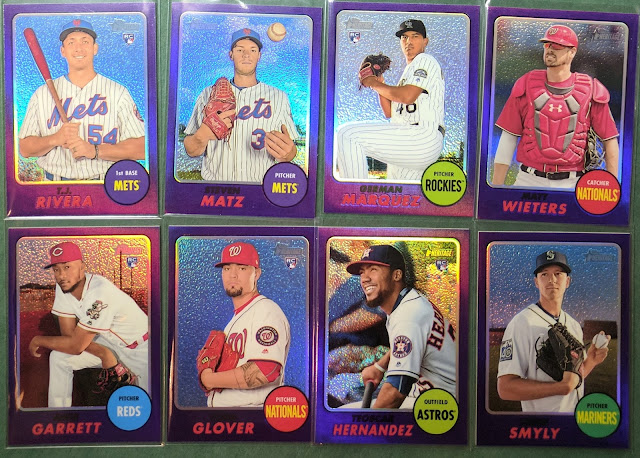 Turns out I grabbed a Purple Refractor hot box! Got one of these per pack. Unfortunately no marquee names among them, but still a nice treat. 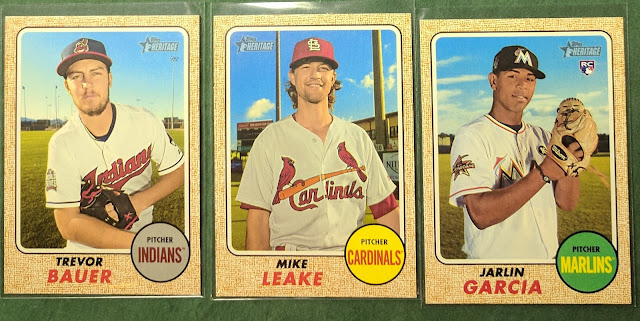 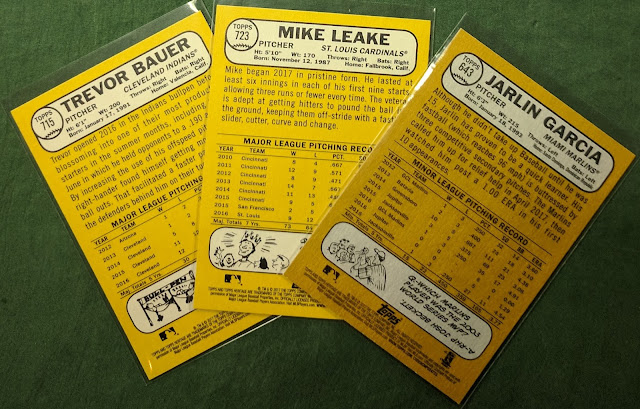 As a Padres fan, I was happy to pull the Allen Cordoba RC (a Rule 5 fleecing from the Cardinals) and the Renfroe insert and Solarte. (Bummer that Luis Torrens didn't make the checklist.) 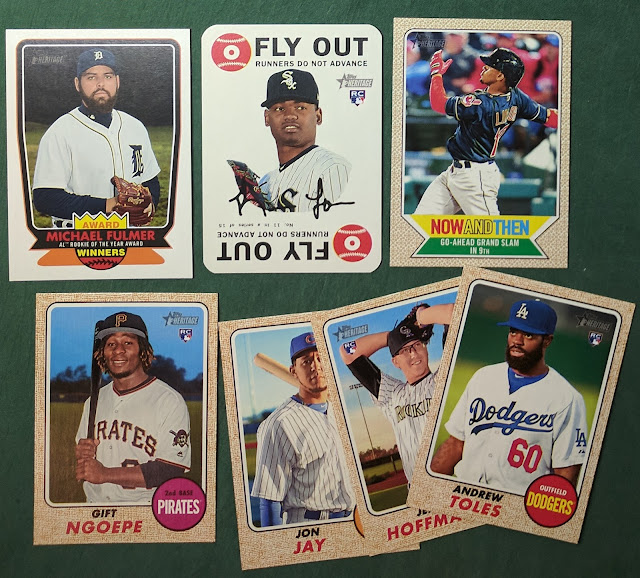 Some other notables. I collect Lindor, but the rest are available for trade. 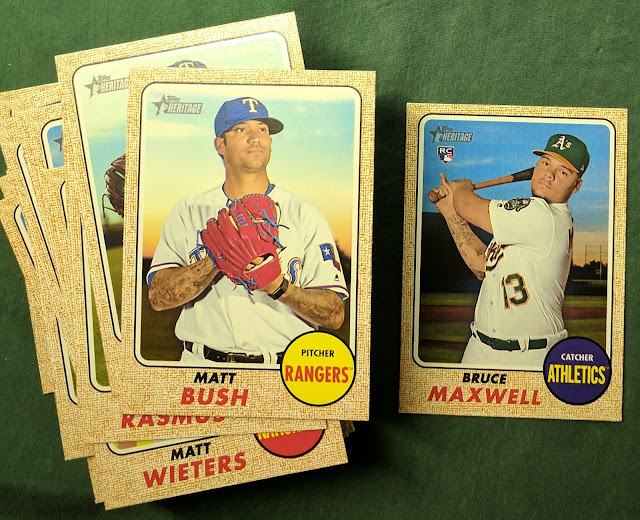 Ok, I had typed up some "political" stuff here, spurred on by the Bruce Maxwell pull. But instead I think I'll just simply say that racism sucks and I hate this joke of a president Russia saddled us with.
But yeah, plenty of other cards available for trade if anyone's working on the set or trying to finish off a team set.. just let me know.

Next onto the Bowman mega box... 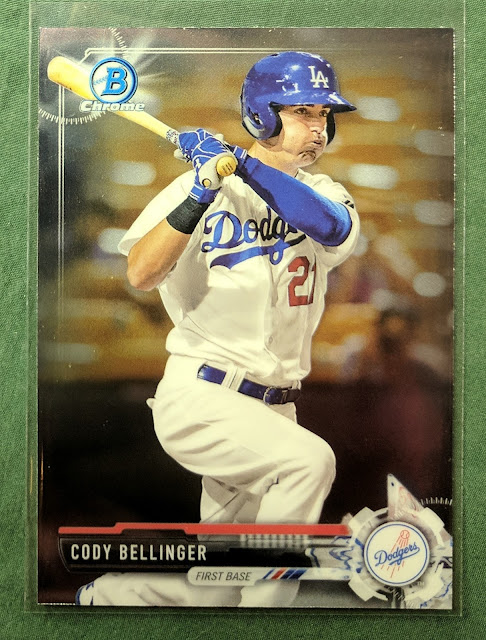 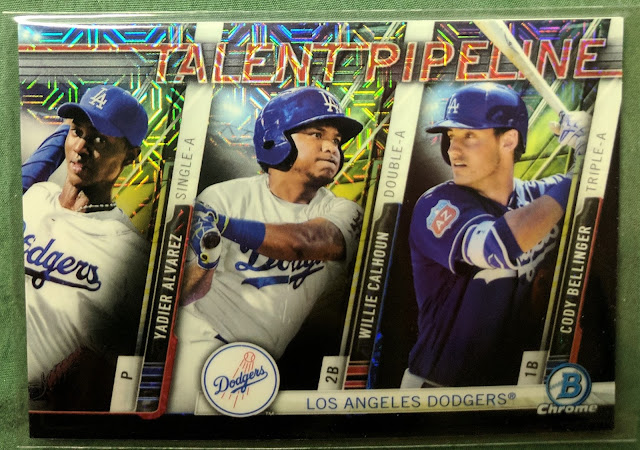 And another! A shiny one, at that! With 3 Bellingers pulled from 2 boxes, there was no buyer's remorse to be had. Can't beat that! Those 3 cards alone pretty much covered my $25 purchase price. I've made a couple different customs featuring Cody Bellinger, but these are my first real cards of his. 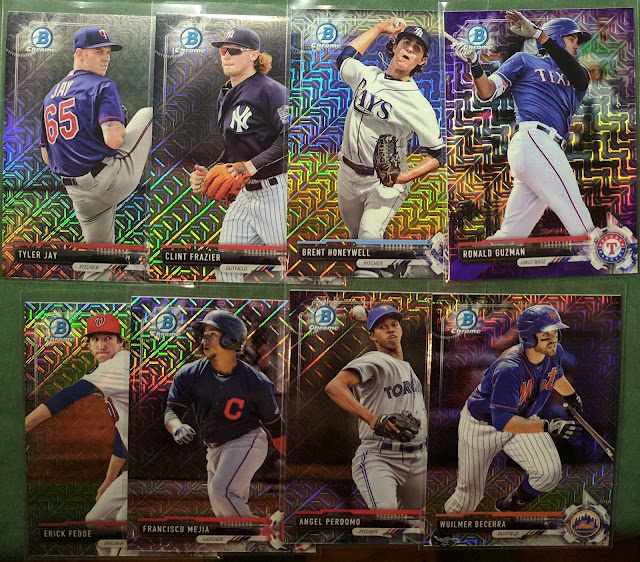 The rest of my bonus Chrome mega box refractor pack pulls were decent too, with Clint Frazier, Brent Honeywell, and a #'d Ronald Guzman among them. While I'm not a huge fan of this "Autobot logo" style refractor Topps has been overusing this year, still gotta admit they look pretty cool when the light is dancing off them. 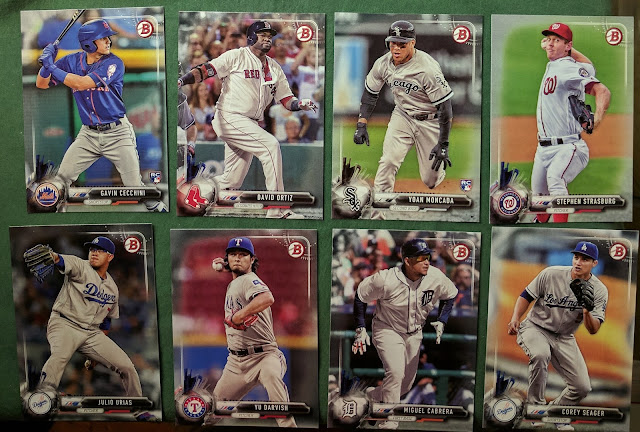 A Gavin and some other notable young'uns and guys I collect.

Some solid Chrome parallels among them. 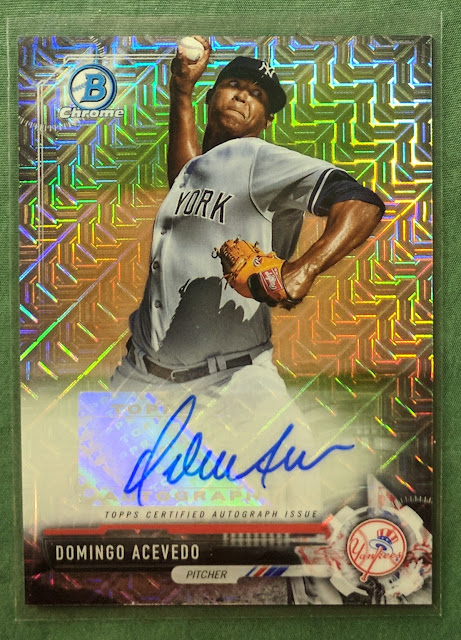 I sure don't pull autos from retail very often.. Hell, as far as non-promised autographs go, this might only be my 2nd or 3rd such pull ever! I don't think Domingo Acevedo is exactly a big-name prospect, but he's on track to make it up to the Bronx in the next year or two if he keeps pitching like he has been. I'll probably hold onto this stickergraph unless Zippy really wants it.

So yeah, I'm glad I had that $10-off coupon to motivate me to pick up these 2 boxes. They definitely provided me with some good cards. Thanks for stopping by.
Posted by defgav at 4:00 PM