A cardsphere PSA and a shiny Goose

It's a common thing on the cardsphere to say something along the lines of, "Wow, I haven't seen one of these cards before!" Folks will say this in a post or a comment and not give it a second thought.

But the thing is, if you've been an active blog reader for a few years now, you likely have seen one of those cards before, just forgotten about it. And it can be disheartening to the blogger(s) who had earlier posted about said card. Not to sound over-sensitive about it, but it's a kick in the crotch if it happens to you and can make you feel like your blog has been ignored. (And I'm not just talking for myself here, as I've heard this sentiment from other bloggers, too.)

I remember one time, I think it was on P-Town Tom's blog he had linked to an older post from a couple years prior, and I read it and thought to myself, "Wow, I haven't seen one of these cards before!" And then scrolled down and there in the comments was an old comment I had left complimenting the card. That was eye opening to me showing that just because a card doesn't look familiar to you doesn't mean you haven't seen it before.

A similar thing happened on a recent Sport Card Collectors post where he posted a new Griffey he got and said, "It's not something I have seen before." I knew I had posted one myself a while back. Sure enough, I looked up my old post, and in the comments SCC had complimented the card. (Of course I was a stinker and pointed this out to him. haha. He's a bud, it's cool.)

These are just a couple examples, but I know a lot of us are guilty of this.

So let's all try to be mindful about what we say, and consider other ways to compliment a cool card besides suggesting it's the first time you've seen it. You might be inadvertently hurting someone's feelings.

Not a huge deal, but figured I'd mention it. 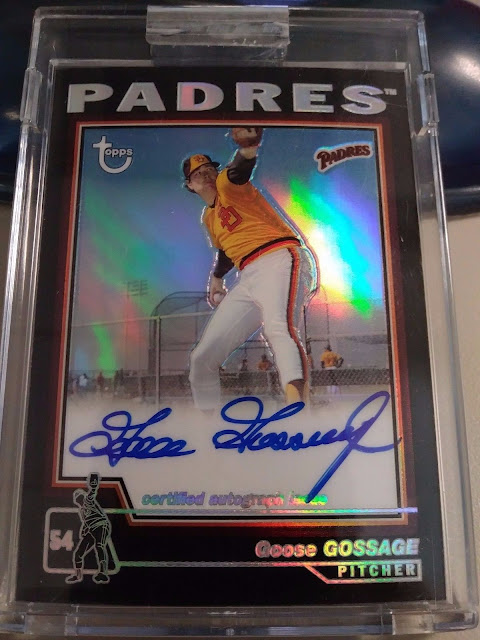 Changing gears.. One guy who doesn't give a fuck about hurting anyone's feelings is the outspoken Goose Gossage. Here's a 2004 Topps Retired Refractor /25 that I picked up a couple months ago. I think I tweeted about it, but hadn't gotten around to showing it on the blog yet. Nice hit for me, as I collect all Retired Refractors, plus it's a Padre. This completes the San Diego team set for me since I already had the Gwynn. (Winfield and Garvey are also in the base set as Padres, but neither got an auto in this year, unfortunately.)

(Who's gonna be the smart-ass to leave a comment saying, "Wow, I haven't seen one of these cards before!"?)

Have a great weekend, everybody!
Posted by defgav at 2:59 PM