The Chargers officially (re)enter the books as the Los Angeles Chargers during Monday Night Football this evening. Now that the San Diego Chargers franchise has come to a close, we can step back and take a look at the past. I'm from San Diego, though I haven't lived there for a few years. Still though, I don't see myself rooting for the LA Chargers. I mean, I suppose they're still my favorite football team by default, seeing as I don't give a shit about the NFL these days. But still, I think I'm rooting against them, at least at the moment. I want them to lose a lot and be last in the league in attendance. I know it's a longshot, but maybe then the owner would come crawling back to San Diego with his tail between his legs.. or better yet, sell the team to someone who isn't a dipship who will bring them back to SD.

With a soft spot in my heart for the glory days of the team, here's a little collecting goal I set out to complete. I don't collect football too heavily, but wanted my card collection to include decent cards from the top guys from my favorite NFL team. I came up with a "Mount Rushmore" model and chose these 4 players.

There they are.. carve them into the side of a mountain. 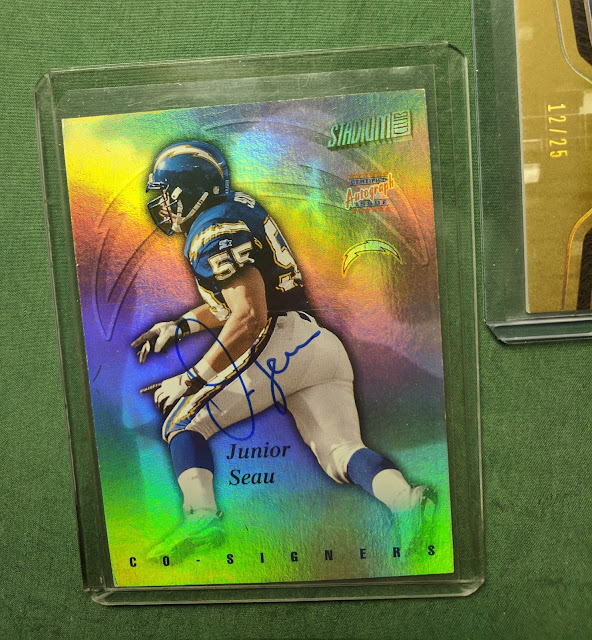 Oh, Junior Seau, the heart of the 90s Chargers teams. Picked up this foilboard Stadium Club certified auto a few months back. I thought it was the coolest looking auto card I could find of his and it was reasonably priced. 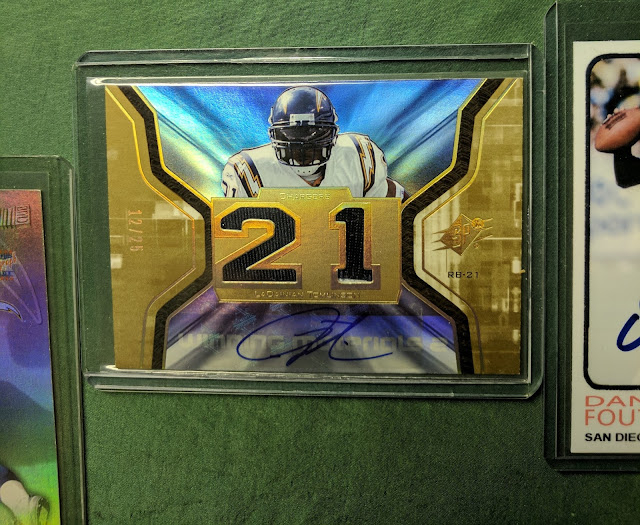 LaDainian Tomlinson. No athlete besides Tony Gwynn fills San Diego sports fans with more pride. Love that this is a Christmas Card, plus has some game-used material in the "21", though the auto is a stickergraph. Might have to "upgrade" to an on-card auto someday. 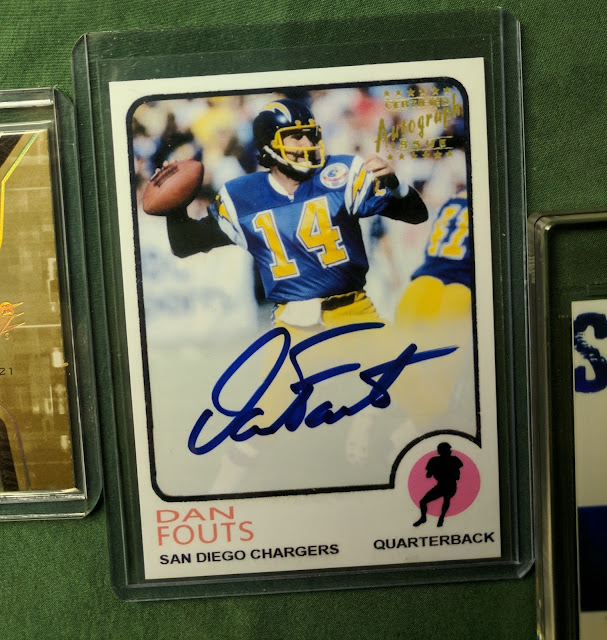 Dan Fouts. Really put the Chargers on the map in the 70s and 80s. This is the only card of the four in today's post that's not a certified auto. But when I looked at the prices for his certified autos, and noted that he was a dependable TTM signer, it was an easy choice for me to go this route. Of all my TTM successes over the past couple years, this signed 1973 Topps Baseball-inspired custom is definitely among my favorites. Thanks again, Dan! 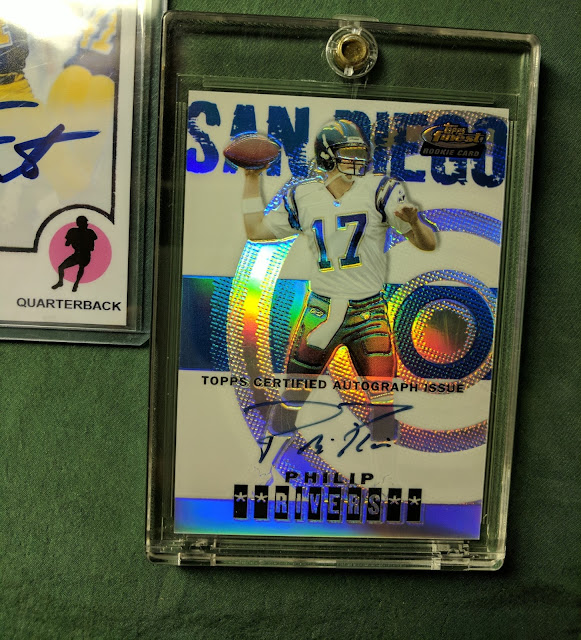 And of course Philip Rivers. Still the Chargers' QB. While I basically hate the team now, I still love the guy. I hope he does well, even if away from SD. Great talent and seems like a hell of a guy. Wish they could have put together a Super Bowl championship team in San Diego at some point over his career, but that's just how it goes, I suppose. Picked up this card a few years back, and it's since been a favorite of my modest pigskin card collection.

The backs. That's Bill Romanowski on the back of the Seau co-signers card.

You'd be hard-pressed to bump anybody from that top 4, but I think honorable mentions gotta include Lance Alworth, Stan Humphries, Natrone Means, Antonio Gates, Kellen Winslow, Charlie Joiner, Drew Brees, Chuck Muncie, Marion Butts, and Shawne Merriman. Anybody worthy of Top 10 consideration I'm forgetting? Let me know in the comments. Hey, I'm a baseball guy.. I ain't no football guru, so I'm not claiming to be infallible here.

Anyways, yeah, I've never been a huge Chargers card collector though I grew up rooting for the team in the 90s/00s, and now that they've moved away I'll be even less likely to add more cards to my collection, but I still can't forget the San Diego teams I pulled for in the past.

Thanks for reading. Best of luck this year to your favorite football team, whomever they may be.
Posted by defgav at 4:33 PM