The LaValley of the Shadow of Death (clean version)

[Ok, my first draft of this post was angry and obscenity-laden. Let's take a deep breath and try it again with a better mindset.]

So Gavin LaValley got a card in 2018 Bowman. It's first first mainstream card since 2014 when he was in Bowman Draft and Panini Prizm Draft, both cards I rainbowed pretty hard, eventually getting down to a handful of scare parallels remaining. So I figured I might see about going hard after his 2018 Bowman card, too.

A while back, Mr. LaValley shared photos on social media of him signing 2018 Bowman autographs, but they didn't end up in this product. I guess that means they're going to be included in 2018 Bowman Chrome..? Either that or they ended up on the proverbial cutting room floor, I suppose.

But still he's got a base card ("paper") and a Chrome card in 2018 Regular Bowman. I figured I'd get a good foothold in a rainbow and I ended up winning an auction for a player break of 12 cases (8 JUMBO BOXES + 4 HOBBY BOXES). I was pretty sure that would land me some good stuff. The only question I had was if I'd walk away with only 1 printing plate or maybe I'd get lucky with 4 or 5 printing plates. 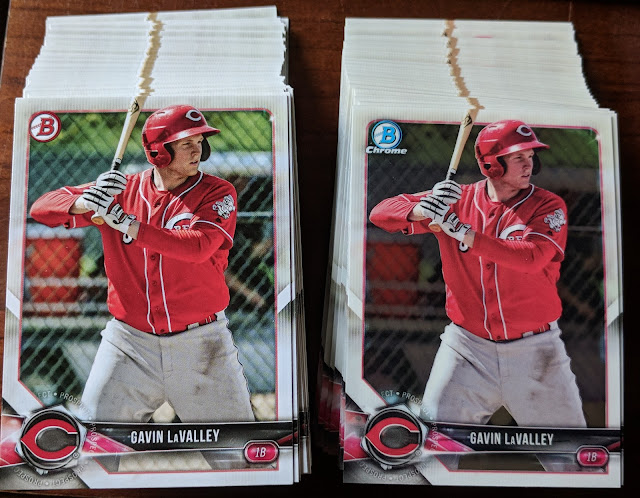 Well, queue the sad trombone. Not even one stinking base refractor! Just a fat stack of each base card and NOTHING ELSE. Wow. By far the worst player break I've been involved in. Never have I gotten such a brutal shaft, and this was easily the largest break I'd ever gotten into, so it just doesn't make much sense from a mathematical standpoint. I was crestfallen when I went through the package. I almost quit collecting right then and there. Twelve freaking cases -- not boxes, CASES! -- and not even one lousy parallel? That's ridiculous. The cardboard gods really kneed me in the crotch there. I mean, it only cost me a bit over a blaster, so it wasn't a huge financial hit, but still devastated me emotionally. 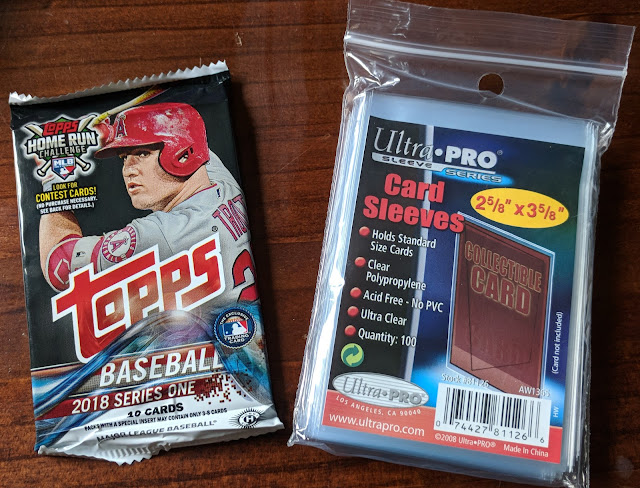 To the breakers credit, he threw in a bonus pack of 2018 Series One and a pouch of penny sleeves. That was a nice gesture, I guess. (There wasn't anything good in the pack.)

And anyways, I decided I'm not going to rainbow this card now. Too painful. Plus, turns out there are 5x7 Topps website-only parallels of it. Listen up: I vow right now here today to NEVER rainbow any card that has any 5x7 versions. I HATE oversized cards. Maybe an occasional big oddball can make it's way into my collection, but those 5x7 cash-grabs Topps puts out with various numbered parallels really irk me. I will never chase them. 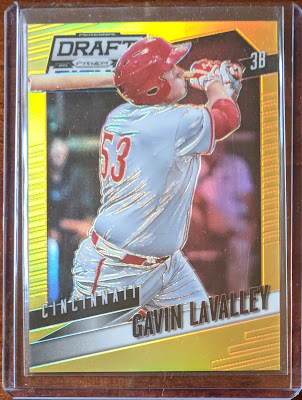 2014 Panini Prizm Draft sure were ugly cards, but you gotta respect that there were no oversized versions. And no printing plates to chase! That makes for a very supercollector-friendly rainbow. I recently scored the /10 gold parallel of the non-auto.

That leaves me with only one last card for the MASTER RAINBOW. Just need the non-auto 1/1 "Infinite Black Prizm" (Panini's version of a superfractor). I've never seen it for sale, but I'll keep an eye out and hope to land it someday. I've got the auto version of it, as you can see in the upper right.

While I'm not happy with how '18 Bowman treated me, I'm still trying to score low-numbered LaValley parallels when I can find them reasonably priced on eBay. 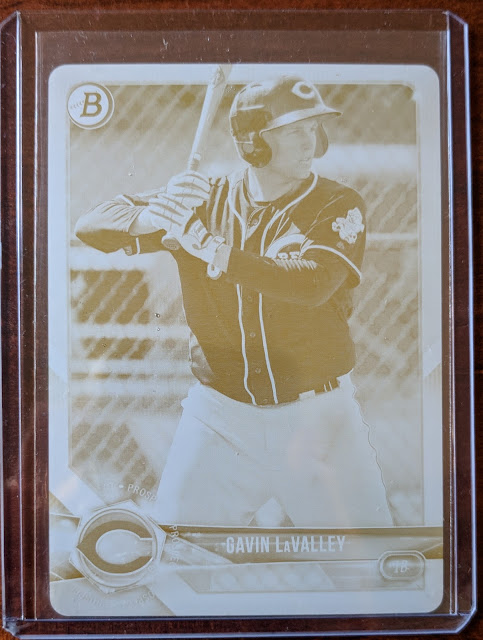 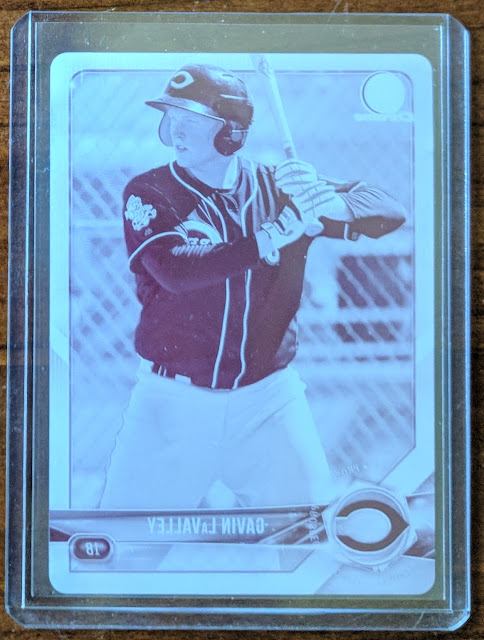 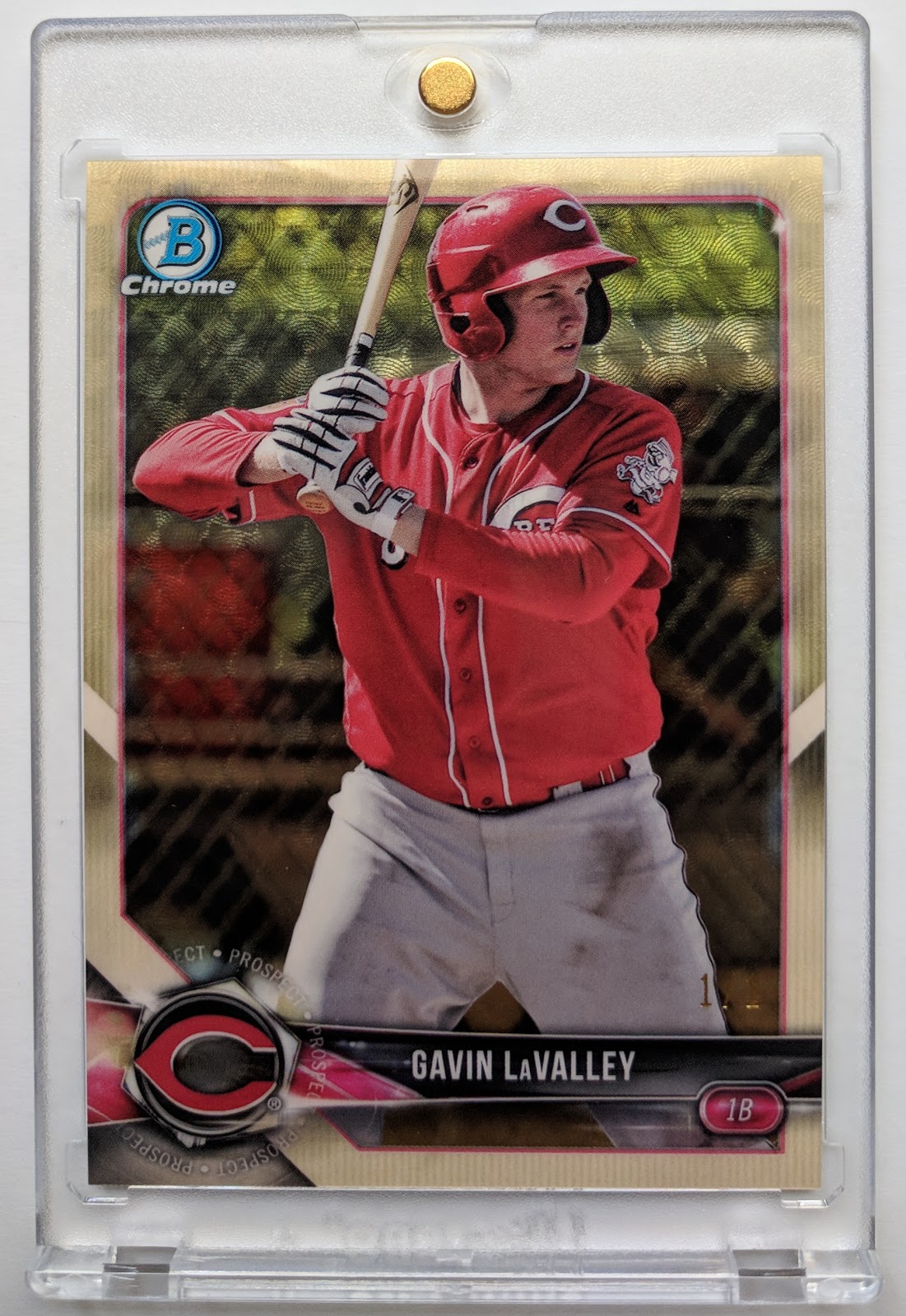 As for LaValley, last I checked he was hitting .214 in AA. Hmm.. well. I hope he starts raking and becomes the next Mike Trout, but regardless, it was quite the ride supercollecting him for a while there.

Thanks for reading.
Posted by defgav at 2:31 PM