Tommy John and Me 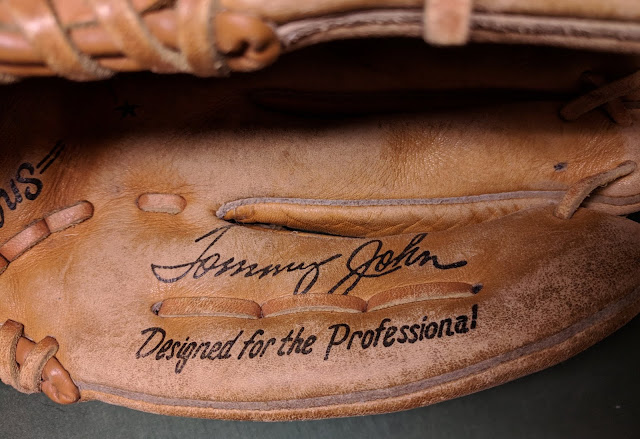 Tommy John turned 75 today. Well, I'm trying to whip up this post quickly in the evening of May 22nd, but we'll see if I finish it before bedtime.

My glove is a Tommy John model. Designed for the Professional. It's the same glove I've had since I was a kid. Gotta admit this wasn't a purchase. I found it abandoned on a playground one day and adopted it into my family. This was probably sometime in 1990, not too long after Tommy's final pitch on May 25, 1989. 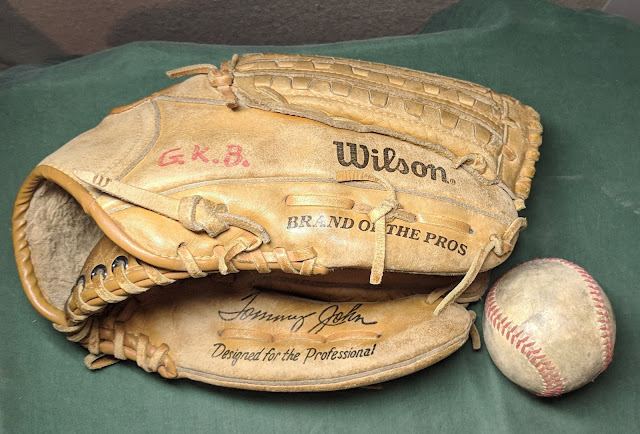 It got a lot of work over the years at local ballfields, though it's been well over a decade since it's seen any real action. With my wife and I deciding not to have kids (pampering a dog is more our speed), it might not ever smell fresh cut grass again and make the smack of a well-grabbed baseball. But I suppose there's a chance that someday I might end up on a company softball team, or perhaps if I'm eventually an uncle I could have a catch with my theoretical nephew (we're all a little surprised my brother-in-law hasn't had any offspring with his wife yet, as they definitely seem like the type to pop out a brood. I think she's like 32 now.. the clock is ticking!)

But anyways, I'll hang onto this glove till the grave.. just in case the day comes that I need a baseball glove. You never know.

Maybe I cursed myself by ending up with a Tommy John glove. I remember one evening in high school, tossing a football around with my best friend Doug and his pops in their apartment complex directly across the street from El Cajon High School. There was one throw that didn't feel right to me. Just felt like I kinda tweaked my shoulder a little. And these ~25 years later, it never fully healed, still feeling some pain when I raise my right shoulder too high at a certain angle. I always just assumed it was a tiny hairline tear in there. But my sport was sprinting, so it wasn't that big of a deal. No Tommy John surgery for me. But a minor annoyance I have to live with.

Maybe not due to Mr. John, but another ominous moment with this glove came one day a couple years later playing catch with my friend Jeff Martin. The guy had a cannon for an arm and would launch the baseball what seemed like a mile up into the sky. It was always a lot of fun throwing the ball back in forth with him until one day I misjudged the ball in the sun and ended up getting slammed in the nose with a high fly missing my glove. I had a pretty cute little button nose as a kid. But since that day, I've had a bump in my nose that adversely effected my looks. There have been times I've thought about what my life would have been like had I caught that ball with my glove rather than the bridge of my nose. Maybe getting girls wouldn't have been so tough. Maybe making friends would have been easier. Maybe I'd be happier and more confident. Or maybe not, but still, I hate my nose and I blame that one misplayed ball for making my life a little harder. (Also, Jeff later borrowed my Double Dragon III Nintendo game and then moved away to Arizona without returning it and I never heard from him again. Haven't forgiven him for that either!)

On the subject of childhood sports equipment, what about what model baseball bat I had as a kid?! Well, I owned a few bats over my tweens/teens/twenties, but the only one I can remember with a player's name on it was a big heavy wood bat with Joe Carter's pre-printed signature burned into it. That one I actually bought, at a sporting goods store, I believe, or maybe it was Target. But I'm pretty sure I bought it in 1992, maybe early 1993, but before his career-defining World Series walk off tater. So if Tommy John cursed me to have a janky shoulder (and imperfect nose) the rest of my life, then in turn Joe Carter should have blessed me with the ability to come up clutch at the ideal time. It hasn't happened yet, but I'm due. One of these days. It's coming, I just know it. So I've got that going for me. Which is nice.

I got rid of the bat prior to moving out of California in that big purge. The only bat I've still got is an aluminum bat I keep by my bed in case of emergency. Its days of popping fungos are gone and the only time I pick it up now is if there's a strange sound in the night I need to investigate. But again, if the day comes I need to bring a bat to a ballpark, it's ready. 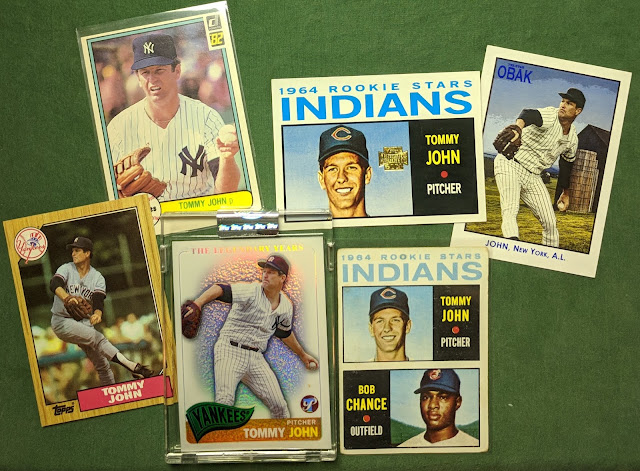 Anyways, back to Tommy.. I've danced around officially adding him to the list of players I collect, but haven't pulled the trigger yet. But I still tend to hang on to any cards of his that come my way, so I suppose I basically collect him, even though the cards are stored in a box labeled "various stuff that doesn't fit in my collection elsewhere" with the other old-timers I kinda-like-but-don't-collect and prospects that have a slim chance of being good someday. And Hunter Pence. I gotta dump my Hunter Pence cards. Why is he still in there? 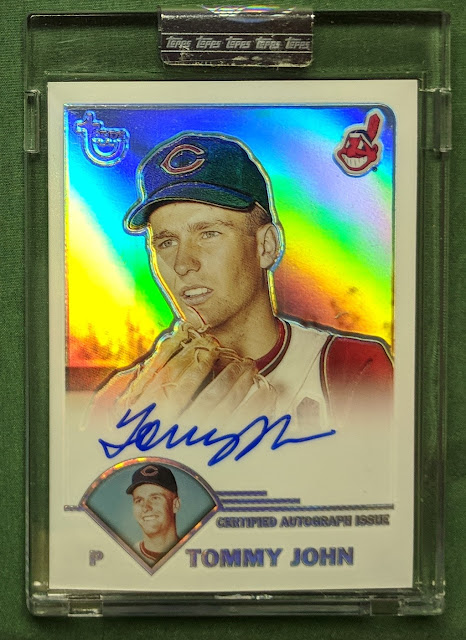 I recently landed a clear "best card" for my would-be Tommy John PC. You know I've always got an eye out for Topps Retired refractors. This one popped up at a decent price earlier this month and I jumped at it. Love it! (--Chief Wahoo and all. The logo doesn't bother me all that much-- probably just desensitized to it at this point-- but I'm all for the team retiring it soon. Gotta adjust with the times, etc. That native american caricature just doesn't have a place in the 21st century.) 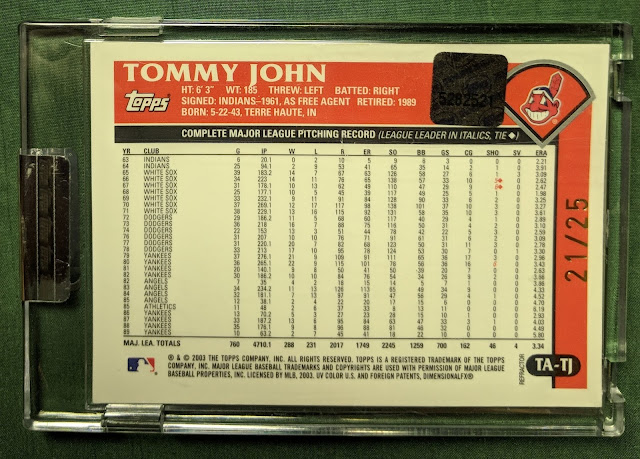 Always love, love, love a wall of tiny stats on the back of a baseball card. Tommy John is objectively worthy of the Hall of Fame per Hall of Stats, which I will defer to on nearly any "does he belong?" argument. His next opportunity is in 2020.. hopefully the Modern Baseball Era Committee does the right thing and inducts him while he's still around to give an acceptance speech. His numbers alone are good enough to get him just over the cusp, and throw on top of that the fact that he's a household name thanks to the revolutionary surgery he was patient-zero for, and you've got a well deserving baseball legend.

Him finally getting enshrined would be nice for me to see. We've got a special bond. He's the guy on my glove.