I'm sorta proud of myself because this might be the season I finally stop being so susceptible to getting caught up in rookiemania. All of my other card-collecting years, I'd get swept up by the hot young guys and try to land a bunch of their cards. It was Judge and Bellinger last year.

But this year? I'm just not feeling it. I don't give a shit about Shohei. I couldñ't care less about Acuña. And I've got too much pride to collect anyone named "Gleyber" no matter how good he may be. Maybe I just got burnt out. (I should mention I'm still excited about Padres prospects, like Fernando Tatis, Jr. for what that's worth, and I'm hoping at least one of the rookies on the team this year can compete for a couple NL ROY votes.)

I started collecting in 1990, so my first real taste of a rookie phenom blasting onto the scene was Kevin Maas. Though his career was a comet that quickly burned out, he's a sentimental favorite to collect these days. And by special request, here's my updated Maas PC, starting with some neat minor league recent pickups. 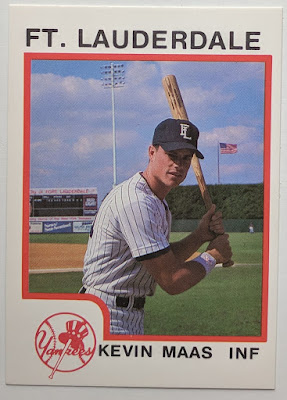 This 1987 Pro Cards is his earliest card.. probably was a pretty hot commodity for a while there. 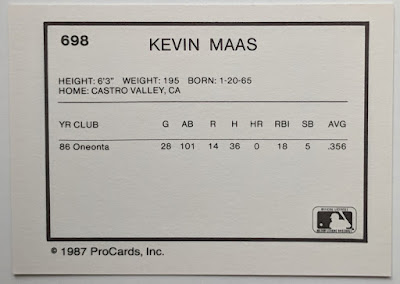 Ha, from his first pro season, looks like he was a contact hitter without much pop. That didn't last long, as his power soon went up and average went down. 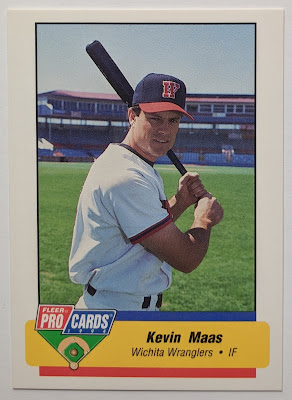 Very similar photo on this one, but this is from 1994, once the bloom had fallen off the rose (or whatever). I believe this is the only card that exists from his brief stint in the Padres organization after getting cut by the Yankees at the end of spring training that year (I'm still bummed he didn't see any action up top in San Diego so he could officially be a "Once a Padre"), but I'm glad there's at least this card to commemorate his short-term stop in the chain. He actually only played 4 games for AA Wichita (hitting a robust 8-for-15) before being promoted to AAA Las Vegas where he was less impressive, eventually getting released on May 23 after 29 games. He then finished out the year with Cincinnati's AAA club. 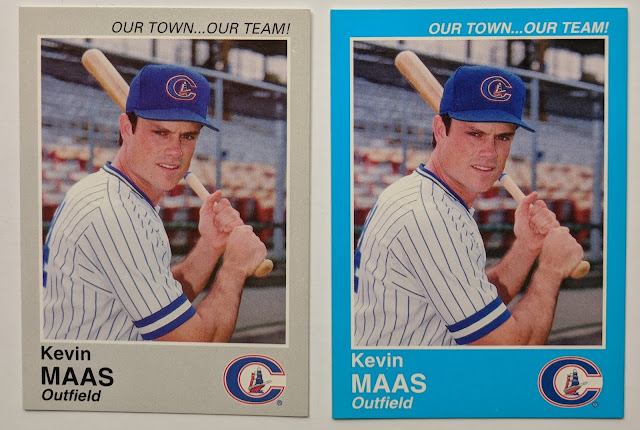 This pair of sister cards is actually from Kevin's double-dip with the Yankees. He started 1995 with the Twins, but was soon cut loose and New York gave him another shot in their chain, though he never made it back to the Bronx. The blue bordered card is the Police version. 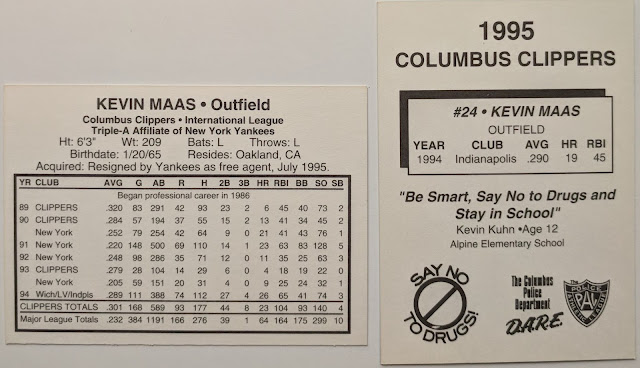 Seems to me the quote attributed to Kevin Kuhn, age 12, was plagiarized from Mr. T. 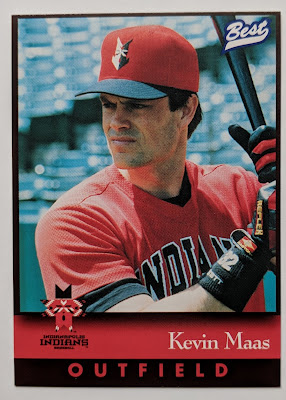 After splitting 1996 with Milwaukee's AAA team and in Japan with the Hanshin Tigers (I don't think there are cards documenting either stint), Maas returned to AAA in 1997, splitting the year between Houston's and the Reds' organizations before hanging up his cleats. I believe this '97 Best issue is the final card from his playing days. 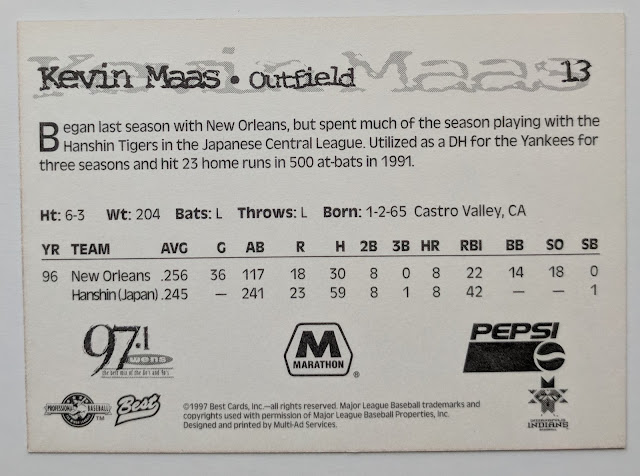 And the back of his sunset card. Thanks to baseball-reference, I can fill in the missing Japanese stats for you: 63 games, 26 walks, 60 strikeouts. There's an error on his birthday; it's actually Jan 20th. 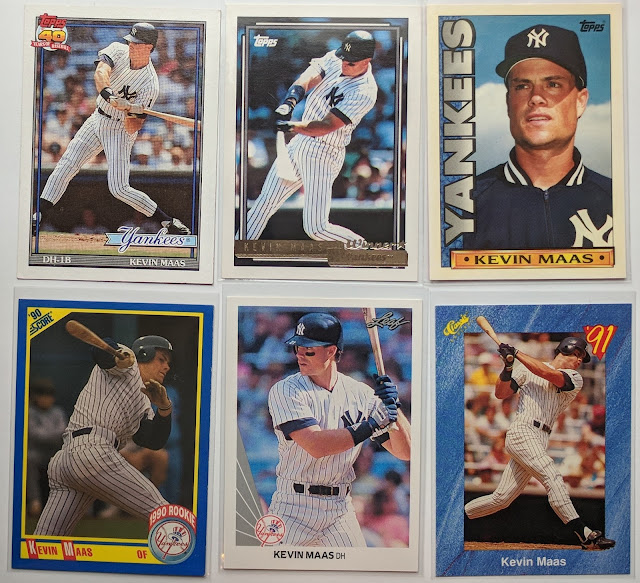 And now for the rest of the PC; here's his Topps, Score, Leaf, and Classic cards I've got.

Bless '95 Fleer for giving us the only card from Kevin's brief Twins stint. 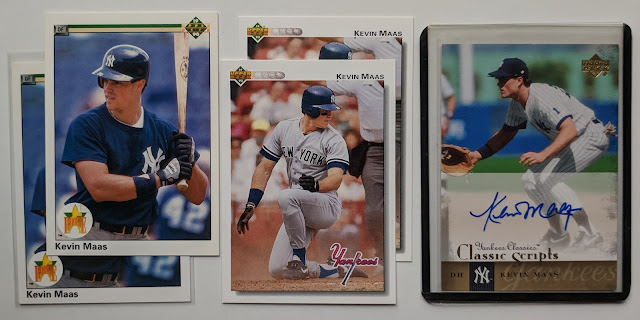 Finally, the Upper Deck cards I've got from him, including an auto. Maybe one of these days I'll try a TTM attempt with my dupes. He's supposed to be a decent signer, I think.

Of course I'm down for adding any more Maases that I don't have via trade.
(UPDATE: see this post for a big update to the PC thanks to a trade with Bo.)
Thanks for reading and have a great weekend. Card show weekend for me!
Posted by defgav at 4:00 PM