The Pinnacle of my Black Friday stockpile 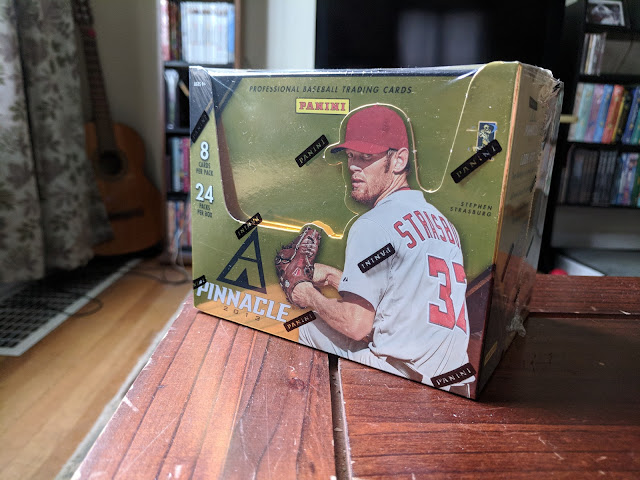 Like most collectors, I didn't pay much attention to 2013 Panini Pinnacle when it came out. No logos, black overload, and not much in the way of big hits to chase (a weak auto checklist of 100% stickergraphs).. it was hard to justify the price. But last Black Friday when a hobby box was on sale for the price of a blaster, I jumped at it. And it's my scheduled box break for May, so here we go. 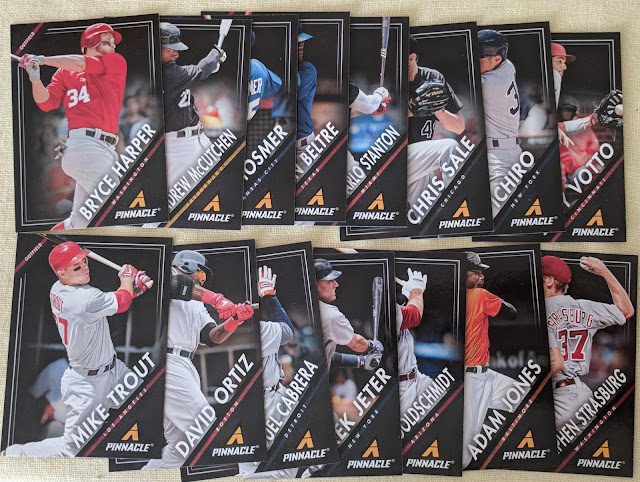 Since I never ripped any of this stuff (and haven't gotten much of it in trades over the years), there were plenty of player-collection needs for me. Oh hey, there's Ichiro. I'm so disappointed with how things went down. Wish the Mariners would have given him a couple more games so he could have faced Ohtani, and let him get a proper on-field sendoff and have him tip his cap to a big ovation. Really feels like us fans got robbed of a couple amazing moments. Oh well. I know I'm fickle, but I've removed Ichiro from my wantlist for now. 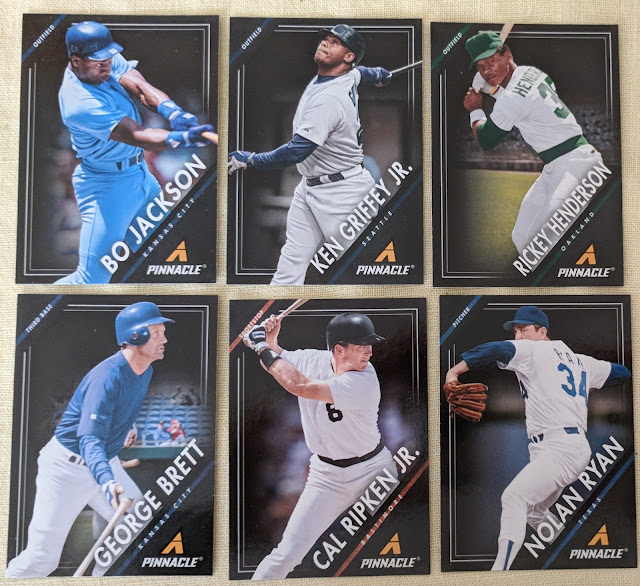 Panini squeezed in some big names from the past. I usually like black borders (see my love of 1971 Topps and 1985 Donruss, for example), but this design just doesn't work. I kinda liked the original Score Pinnacle back in the day, but was never a huge fan of it, to be honest. 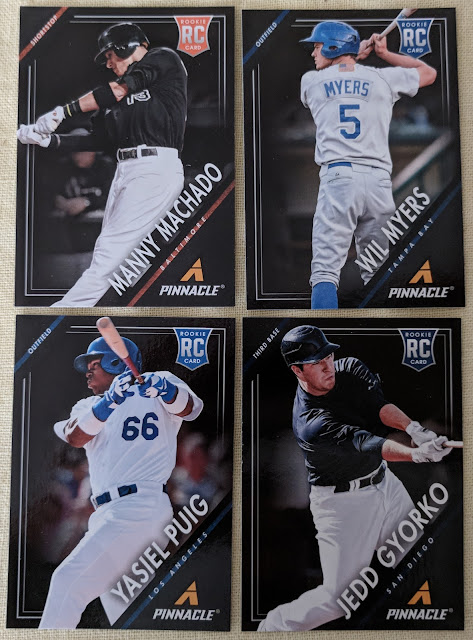 Instead of doing colored parallels (which probably would have been a refreshing change of pace), there are parallels that have a modest level of dufex action going on (I think Panini calls them Museum Collection parallels). Don't look like much in the photos, but kinda cool in hand. (These 3 are all available for trade.)

Some dufexed inserts. I collect Giancarlo, but the other 2 are up for trade. Bummer I don't collect David Price, as I kinda like the metallic look of that "Ace" card. 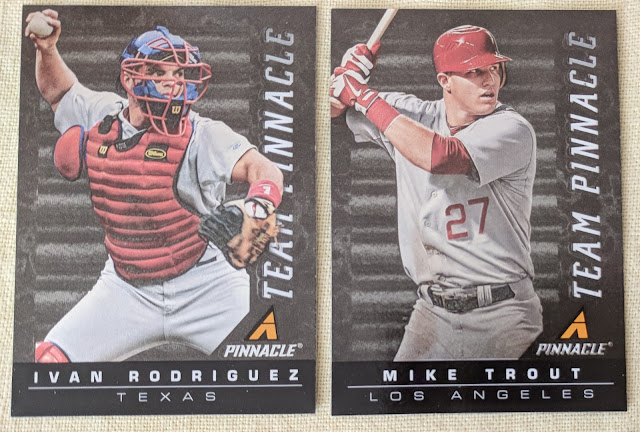 These two are pretty cool. That wraps up the dufexy cards.

Howbout we cleanse our palate with some acetate cards. A couple PC hits for me here with Reggie and Votto.

Nice Kershaw here. Other two available for trade. (was somewhat of a Brewers hot box). 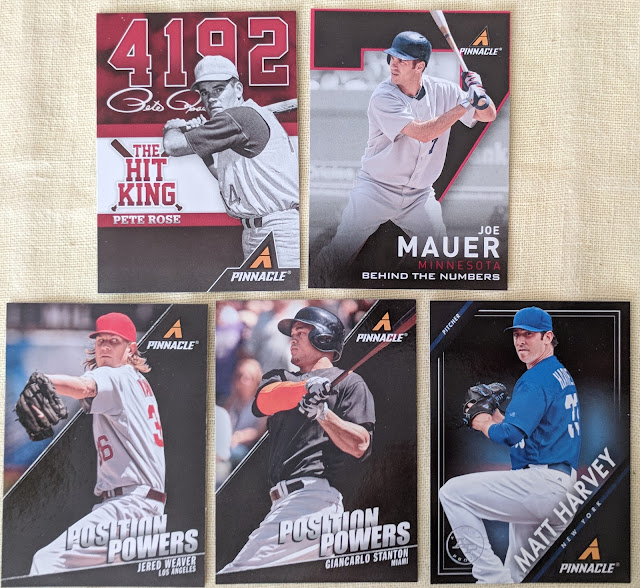 A few more inserts here, plus a Matt Harvey artist's proof parallel (not serially numbered). Looks like Harvey is done in New York.. at least in the NL. Besides the Rose and Stanton, these are up for trade.

Another addition for my Manny Machado PC with this Team 2020 insert. 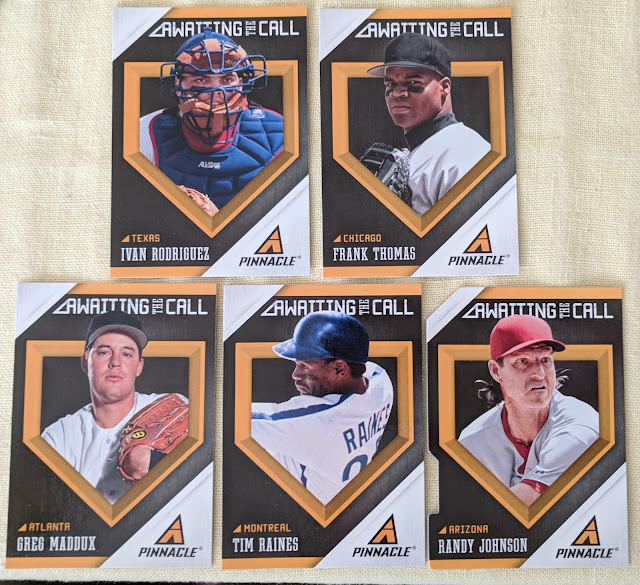 Panini went 5-for-5 with these Awaiting The Call predictions, with only Tim Raines making it close. The Randy Johnson is a diecut parallel. 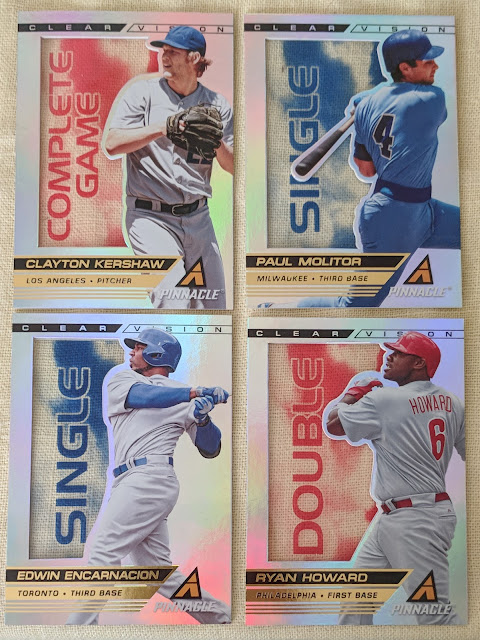 Clear Vision inserts might be what 2013 Pinnacle is best remembered for these days. The Kershaw and Molitor are nice hits for my collection. Edwin and Howard are available for trade. 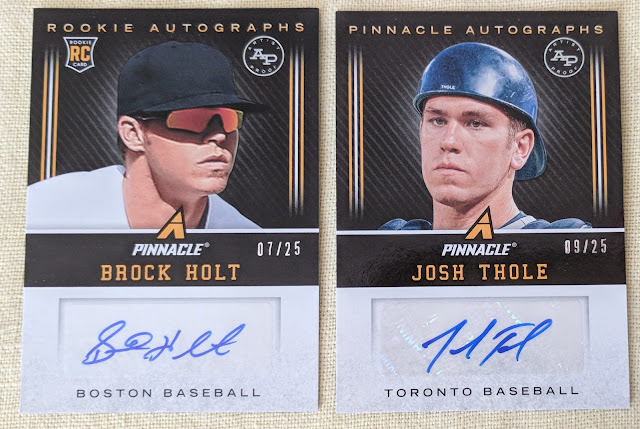 And finally, my autos. As expected, they're far from being big names but hey-- they're both Artist Proofs, #/25! So at least there's that! The only numbered cards of the box. (Too bad neither was 12/25.) Brock Holt has been a valuable utility guy for the Red Sox so far this season. Josh Thole has been out of the game since 2016, but had a respectable 8-year career behind the dish split between the Mets and Blue Jays.

These are both open for trade offers. Also got plenty of base cards to get rid of if anyone is working on the set or a team set.. just let me know.

Not a bad box, all things considered! Especially for the discounted price. Thanks for checking it out with me. Have a great weekend.
Posted by defgav at 3:39 PM