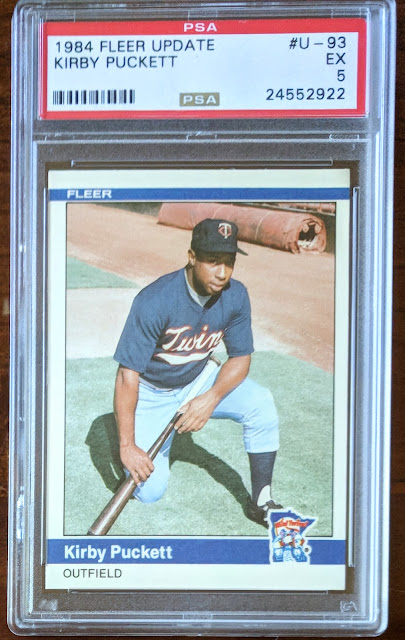 This was a white whale type of card for me that I hoped to land one day, and am very proud to own it now. Got a solid deal on it with the help of an eBay coupon code. I wanted a PSA-slabbed copy since I know there are known to be counterfeits of this one out there. It doesn't bother me that it's graded a 5, which isn't very good for a modern card, though I've given it a close look-over and am not sure what knocked it down. I guess the upper right corner is a tad discolored, but not bad at all. If that helped drop the price on an otherwise beautiful card, I'm totally cool with that. 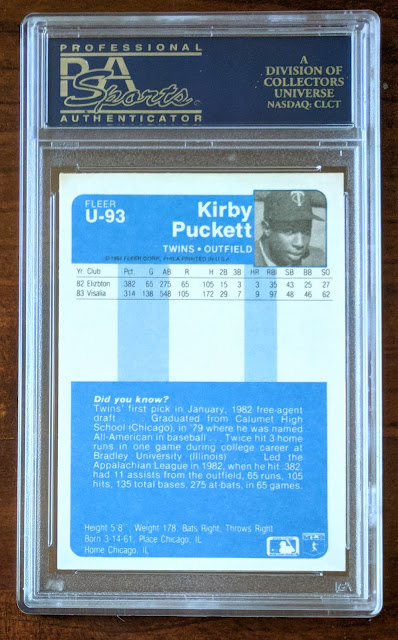 This is his "one true rookie" since he didn't get a Topps or Donruss card until 1985. (..though being in an Update set, you could argue it's not actually a "true" rookie, but rather an "XRC".)

I'd like to eventually get the Roger Clemens as well as the rest of 1984 Fleer Update to complement the '84 Fleer set I built a few months ago. But I've got the big one out of the way now.


I tweeted this out last night and got a lot of good responses. If we're talking "back in the day", you could make a strong case for the '85 McGwire Team USA card, perhaps the Canseco Rated Rookie, Mattingly rookies, and the "big 3" from 1983 Topps. But here in 2018, the only 80s rookie card I think would have a shot at challenging for the podium of "Top 3 rookie cards of the 80s" would be the '82 Topps Traded Ripken (which I'd like to score someday). But that's just my opinion. Fun to hear other takes on the matter, so feel free to chime in.
Posted by defgav at 12:22 PM