I had a crazy Friday morning, waking to see my Twitter blowing up. A tweet of mine from the night before had caught on with a several retweets, including some prominent sports accounts. My tweets usually get "likes" in the single digits, so it's pretty thrilling to tweet something that got hundreds of likes, even impressing ESPN dudes like Darren Rovell and Pedro Gomez.

June 28, 1976: Rookie Mark Fidrych wows the nation in a complete game win over the Yankees on Monday Night Baseball. I made a gif card of it. pic.twitter.com/8Zr87q22q3
— Baseball Card Breakdown (@breakdowncards) June 29, 2018


Funny thing is this was like the 3rd time I've tweeted this gif since making it back in April. I normally don't like repeating myself, but I've noticed a lot of popular accounts like @Super70sSports aren't afraid to post the same pic/joke every few weeks, and nobody seems to mind or even notice. So whatever. Sometimes it goes unnoticed, sometimes it goes viral. If you got something good, don't be afraid to break it out once in a while, I guess. And my custom card gifs tend to get a good response, so I really should whip up more of those.

Oh, the other thing that made my Friday morning eventful is I biffed it during my little morning jog, scrapping up my hands a little. Got an unfortunate cut on my right thumb right where you'd use it for typing the spacebar and dragging/scrolling. So that limited my typing for a day or two (my post on Friday was mostly written the day before), but it's doing better now. 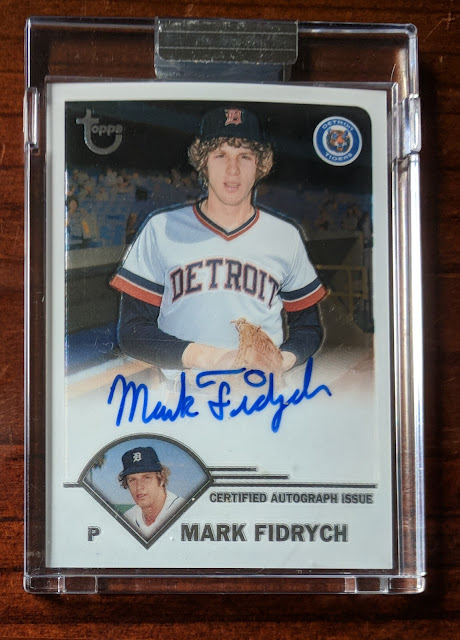 Coincidentally, the recent anniversary of the Bird's big game on June 28th was also the day I received my first certified autograph of the man, having scored this 2003 Topps Retired auto for a bit over a blaster. (There had been a refractor parallel of this card on eBay for a while at a price that was "reaching" [and no "Or Best Offer" though I did send the dude a message trying to work out a deal, but he politely declined], and it finally got boughten the other day.) But yeah, this base auto is pretty cool, too. 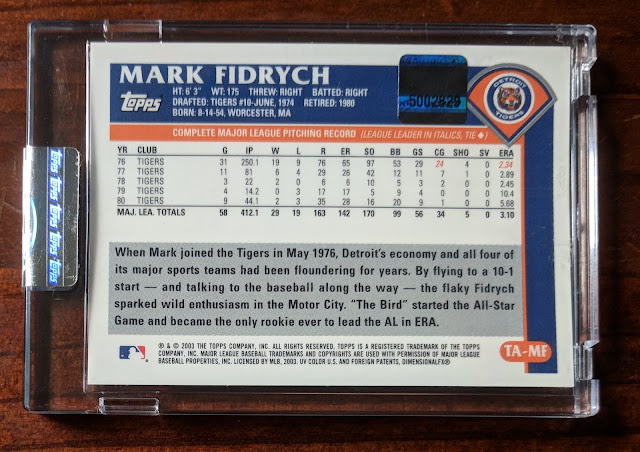 Nice back. Love this card. I'm a big Topps Retired guy, as regular readers are well aware, and Fidrych has been a favorite recently-prioritized PC this year.

And the seller was super cool and threw in a great surprise bonus card... 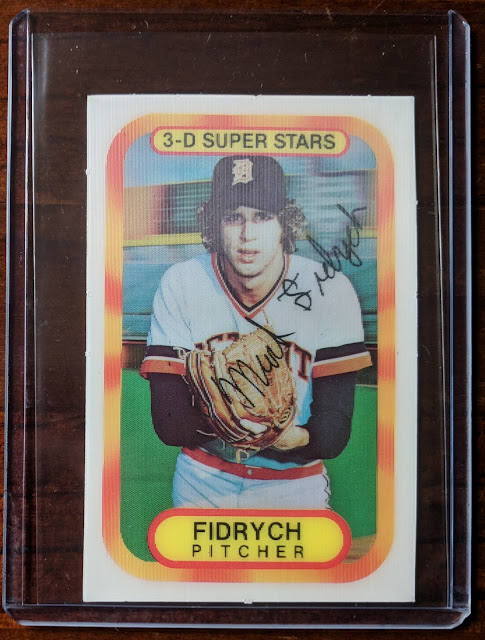 Woah! That's his 1977 Kellogg's rookie card.. nice! It's in awesome condition too. If I were the kind of guy who sent in cards for grading, I'd probably send this one in. 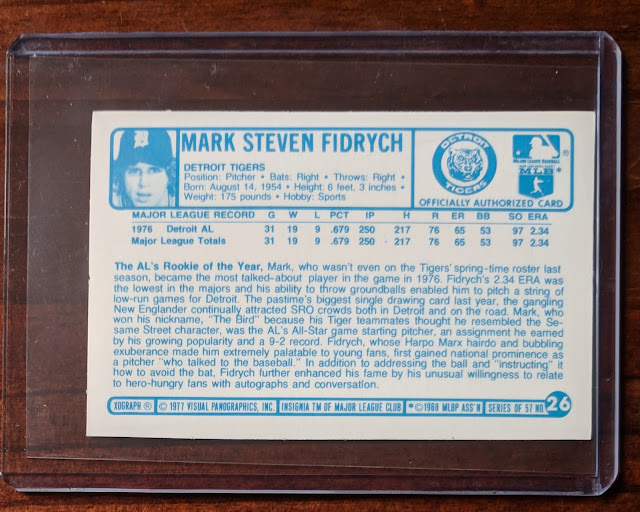 This might be the best bonus card I've ever gotten in an eBay purchase. The cheapest copy of this card on COMC is currently $14. So yeah, great deal and generous seller. Seems to be a Tigers fan slimming down his collection. (Here's a link to his listings.)

Thanks for reading!
Posted by defgav at 5:08 PM