There's an unofficial Blog Bat-Around going around of narrowing down your collection-- if it came down to it-- to just 5 of your favorite collecting passions. Like if your significant other gave you an ultimatum to shed all but the 5 favorite avenues of your collecting pathways. Or maybe times are tough and you just need to sell part of your collection for financial reasons. Whatever the cause, that's a tough question to think about! Let's see how I do. 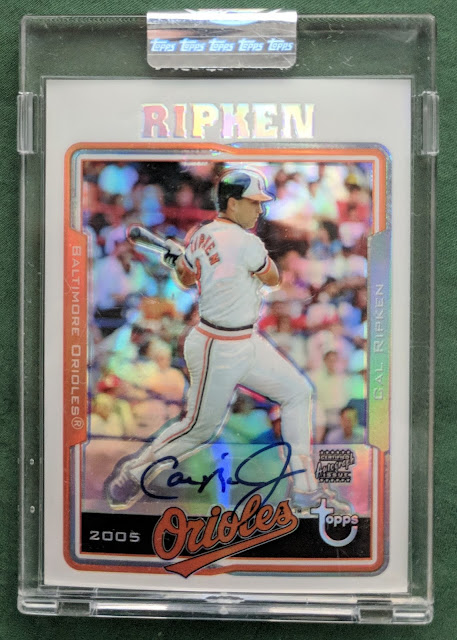 "My babies!" I credit this product for getting me to dive back into card collecting after a couple decades away. (Topps Archives got me to stick my toe in the water, but Topps Retired got me on top of that diving board.) I like the base cards and regular autos, but the refractor autos are king. If I were forced to split the 3 sets up separately, 2004 is the one I'm keeping, no question (see header), though I'd be sad to see 2003 and 2005 go. Just recently picked up the above '05 Cal Ripken refractor and it's a great looking card!

I'm really proud of building my favorite old sets over the past few years. In order, I completed 1973 Topps, 1971 Topps, and 1965 Topps. Currently working on 1957 and 1964. I've put a lot of time and effort (and $) into these and think I'd feel a big void if I had to part with them. Like, I might not have many Koufax cards, but if his name comes up, I feel good knowing I've got his '65 card, as an example. And all the lesser-known non-star guys filling out the set are fascinating too. Vintage set collecting is great. If money were no object, I'd go nuts on all of them, but as it stands, I just pick a few of my favorites to work on. 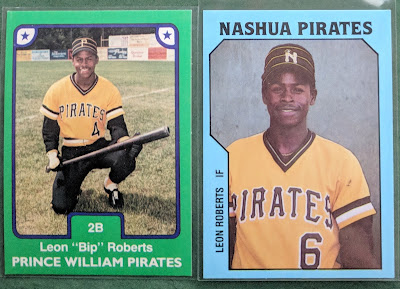 Ok, this one is a cop-out because I think I've got well over a hundred player collections, making up a good portion of my collection as a whole. So for this exercise, I should parse them out (as I organize them in real life) into 3 main categories: HOF (all-time greats I like who are in the Hall of Fame, plus Pete Rose), Retired (fan favorite guys who aren't in the Hall), and Active. If I could only keep one of these 3 buckets, I would probably have to go with the Retired guys, as they are typically the most fun for me to collect. I just finally added Bip's two minor league cards from back before the Padres snagged him in the Rule 5 draft from the Pirates.. and I absolutely love them. (Can you imagine if Pittsburgh held onto Bip? They would have been a championship dynasty of killer B's with Bip, Bonds, Bonilla, Bream, Bob Walk, doug draBek, Rafael Belliard.) Anyways, yeah, I don't think I could give up those PCs. Guys like Dick Allen, Nate Colbert, Bill Madlock, Rod Beck, Ken Caminiti, Fred McGriff, Khalil Greene, Julio Franco.. all high among my favorite guys to collect. It'd be hard to say goodbye to my HOF PCs (Hoyt! No! Gwynn?!) and active PCs (love my good Trout cards), but that's how it goes. 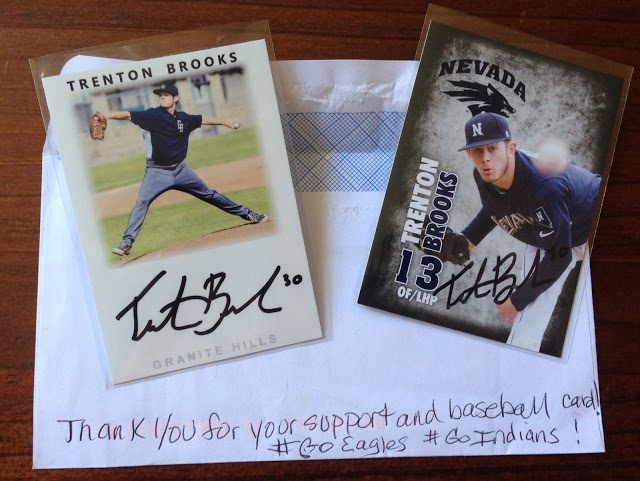 Collecting cards of guys who went to my high school gives me a personal connection to my collection. "Remember your roots" and all that. Cool to think these guys walked down the same halls as me as a teenager on their way to Algebra II or whatever, and then went on to become pro ballplayers. There might be some "living vicariously through them" stuff going on here.

Man, that's too much of a Sophie's Choice for me. In the running would be:
Christmas Cards (cards serial numbered 12/25 and 12/24)
Gavins (guys like me named Gavin)
Glow-in-the-dark cards
Modern sets (my completed sets from the 80s plus projects like my 2004 Chrome and 2011 Topps parallel setbuilds)
Pride PC

Gun to my head, I might have to go with my non-sports cards as my final pick. Lumped into that would be my Girlie Cards, Ghostbusters auto set, Goonies auto display, MST3K, Simpsons, and Star Wars cards, among others random stuff.


Stuff that would be first on the chopping block?

Other sports... sorry football, basketball, and hockey.
Random Padres cards.
Various rookies, hits, and "doesn't fit elsewhere in my collection" stuff.
Non-card stuff like figures, bobbleheads, postcards, etc would also be gone, not that I have much to begin with. (Hopefully I could hang on to my small collection of old toys.. GI Joe, Transformers, etc.)

But thankfully, it was all just a theoretical bad dream. I can keep on collecting whatever I want. Whew!

How about you? What would you keep/part-with if it came down to it?
Thanks for reading.

Made another animated card gif. Tried something different with the back of an '89 UD. This one isn't taking off on Twitter nearly as well as the Satchel Paige one I made the other day (170 retweets and 450 likes! Wow, that's gotta be my most popular tweet ever), but still fun to make and people seem to like 'em.
Posted by defgav at 4:14 PM