Got a few nice trades packages from the past week or so to show off. 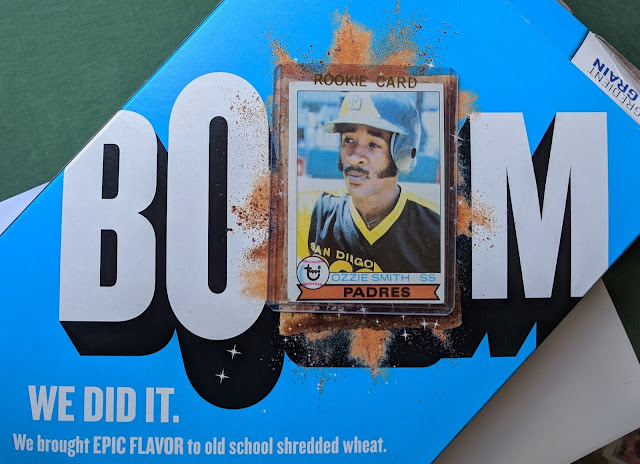 Ozzie Smith rookie bringing the boom! Story behind this is an Ozzie collector came across my old Simpsons customs being talked about on Reddit and got in touch asking if he could buy copies of the two Wizard cards in the little set. I don't sell my customs, but told him I'm up for trade offers, and specifically I could use an Ozzie RC if he happened to have an extra. Lucky for us both, he did have a poor condition copy he'd be willing to part with. That was fine with me, and we swung a quick trade. It's miscut and has some wrinkles, but I'm happy to refill this hole in my collection. (I used to have a '79 Ozzie, but had to give it up in order to seal a big trade with Matt Prigge last year that netted me a nice Carlos Correa auto.)

Thanks again for the trade, Benjamin!

Next up is a quick swap with notable reader Mark Hoyle knocking off a bunch of my remaining 1982 Topps needs. 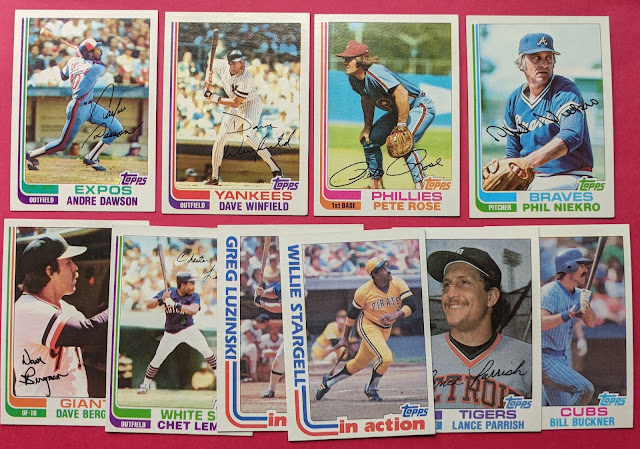 Thanks, Mark! Hope you like what I sent you back (should arrive any day now).

Chris the Collector is next up. 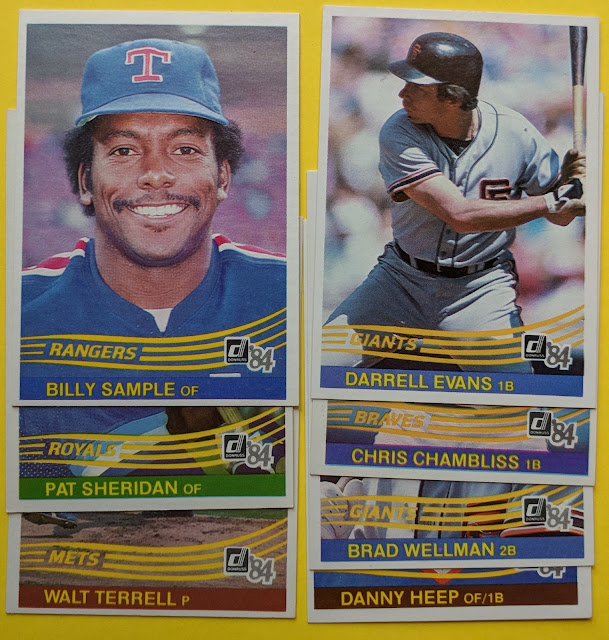 Seven cards now checked off my '84 Donruss setbuild. Much appreciated! 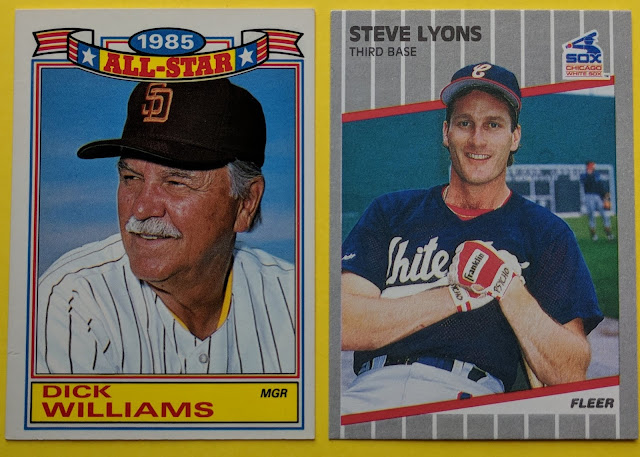 Also a Dick Williams and Steve Lyons. Jedi Jeff gave me a heads-up on the '89 Fleer card a while ago and so I put it on my wantlist. Check the batting gloves. Figured this would make a solid card for my "We Didn't Start The Fire" binder for the Psycho entry.

Thanks, Chris! I'll hit you back with a return soon.

Next we have a surprise Stealing Home package. I was happy to be included in his latest wave of outgoing cardboard. 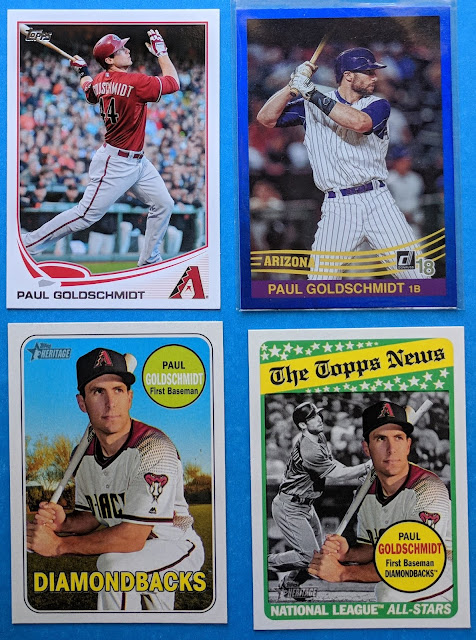 A couple Bryants and a Fernando. 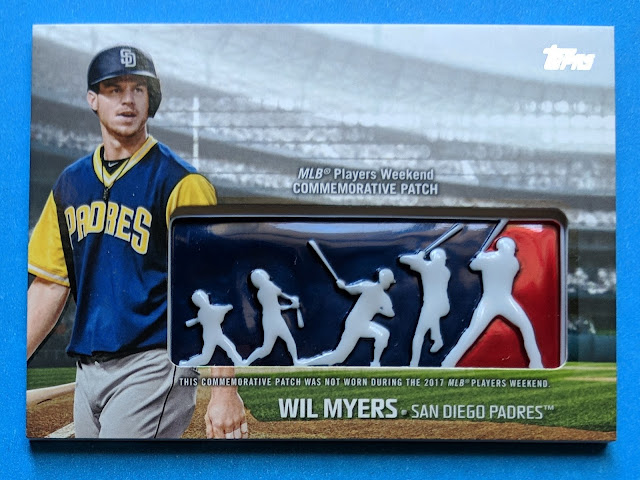 But the most impressive card of the package was this Wil Myers commemorative not-a-patch. I've cooled on collecting White Queso in the past year or two, but still like getting hits or numbered cards of his in trade. (UPDATE: he hit a couple three taters today!)

Thanks, man! I'll round up some Dodgers to send your way shortly.

Last one for the week, a trade with reader TSHenson, who seems to be the most active Indians collector on the cardsphere these days. 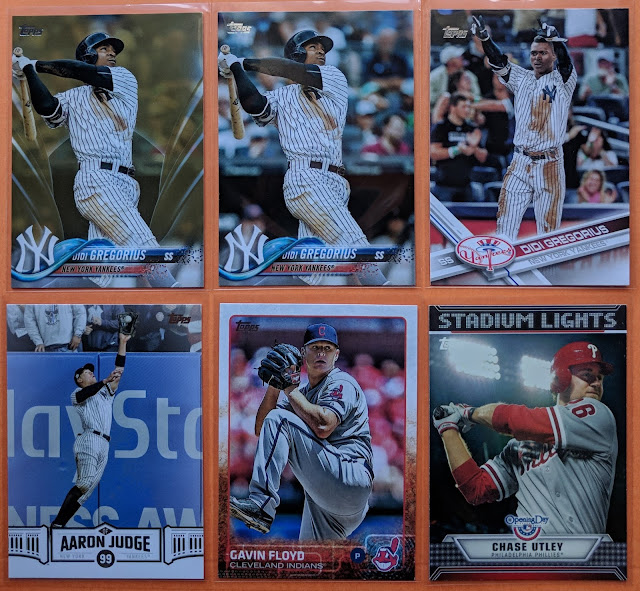 Some Didis including a gold parallel, neat Judge insert, a Gavin, and a glow-in-the-dark Utley. 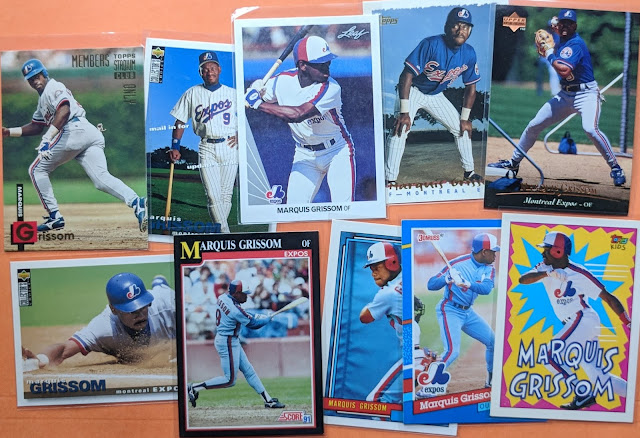 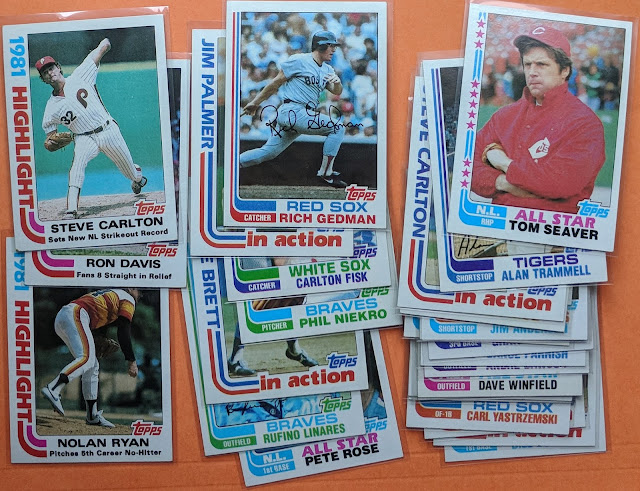 But the real star of Tim's package was an impressive lot of 1982 Topps, featuring a bunch of big names I needed. Thanks to him and Hoyle, I'm down to single-digits left to put this set to bed:

Thanks a lot, Tim! I've got a bunch of solid Indians rounded up for you and I'll drop them in the mail very soon.


Thanks again to all my trading pals. If anyone else wants to trade, take a look at my wantlist and get in touch. Thanks!

Bonus Content! In my continuing quest to get attention on Twitter, I've made another card gif. This one may be one of my best, if I say so myself...

The great Satchel Paige would be celebrating a birthday today, were we lucky enough that he was still with us. Love to get a look at his incredible windup!

p.s. Unsolicited plug, but the "boom" background on the top Ozzie pic is a box of Cinnamon Toast Crunch Shredded Wheat. Picked up a couple boxes for a great close-out price and it's pretty good stuff!
Posted by defgav at 2:12 PM