I haven't done a "Guns N' Randoms" post in a while, where I clear off some cards from my sorting table so I can file them away, and title the post after a GNR song, going roughly in chronological order. I think the reason for the delay is the next song up "Mama Kin" (Aerosmith cover) doesn't lend itself well to a title for cards. I mean, yeah, there's a prominent fellow cardblogger named Kin Kinsley, and it would make a solid title for a trade post featuring cards from him, but unfortunately I don't recall ever trading with him and I can't wait indefinitely for that to happen.

The opening lyrics are "It ain't easy, livin' like a gypsy" so maybe I should feature some Gypsy Queen cards or something? Nah.

The best I can muster is that "Mama Kin" doesn't sound too far from "Templeton." 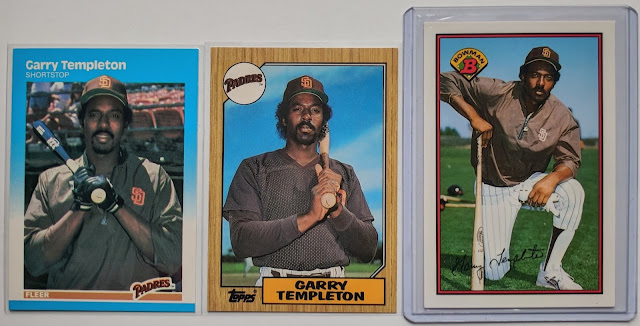 As if this post hadn't scared off enough prospective readers already, I'm leading off with a trio of overproduction-era cards. Somebody alert Blogger to prepare backup servers ASAP because the imminent traffic surge on this post may cause a system failure!! 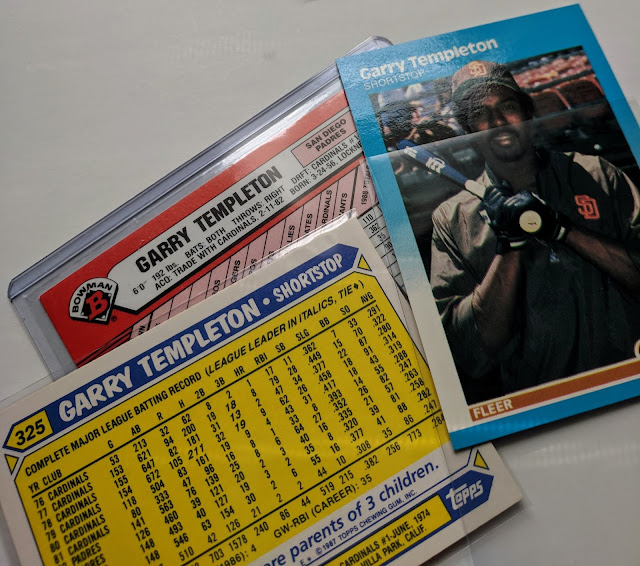 But check it out, these aren't (quite) junk after all. They're Tiffany/Glossy versions I picked up to spice up my Garry Templeton PC. 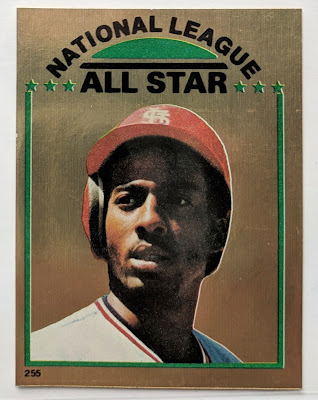 And another off-the-beaten-path Templeton, this a shiny gold sticker from 1981. 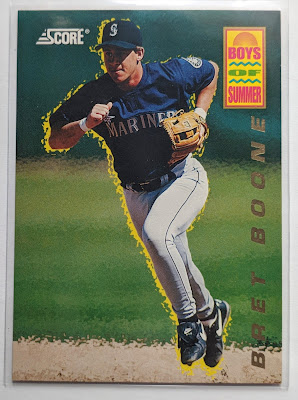 A blogger I can't recall now was talking highly of Boys of Summer inserts from Score. Prone to peer pressure, I went looking for a cheap example I could fit into my collection. I settled on Bret Boone since he's almost a guy I collect thanks to being from my neck of the woods not to mention he played a few solid season in San Diego. While the steamy mirage thing is kind cool, honestly this 1994 design doesn't do much for me and I'm second-guessing this $1 purchase. The 1993 design is pretty hot though (pun intended), featuring a big, bright sun behind the player. I'll have to keep an eye out for one of those, especially the Piazza, Pedro, or Klesko. 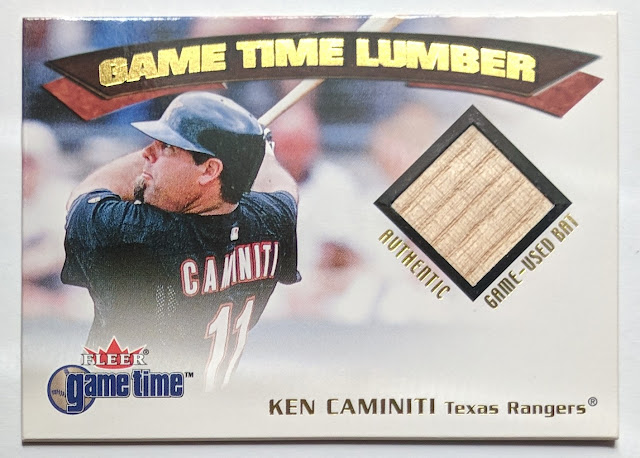 I love adding cards of the late, great Ken Caminiti, especially from his short-term stops, and especially hits. He only played 54 games with the Rangers, so he doesn't have many cards with them, making this bat relic even cooler in my eyes. 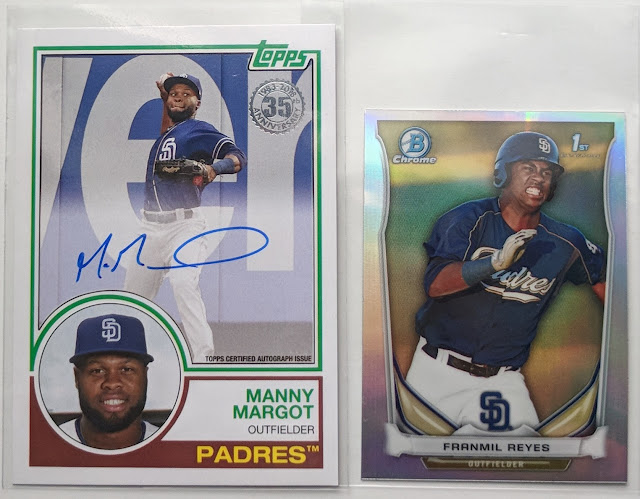 The 2018 Margot auto was an add-on buy with a recent eBay win. He hasn't been great this year but figures to stick as the Padres center fielder for the long haul. He's still only 23.

Another 23 year old Friar, Franmil Reyes was tearing up PCL pitching earlier this season, and was called up for a brief stint in San Diego but is now back in AAA (Update: just recalled again). He has very little cardboard on the market at the moment. I picked up this 2014 Bowman Chrome mini refractor on COMC a while back. 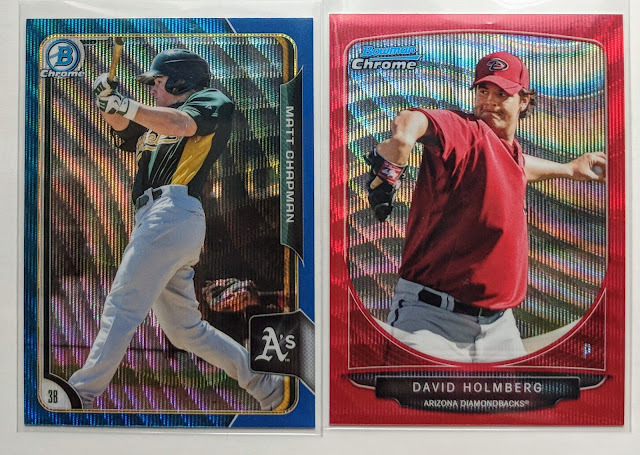 Speaking of Bowman Chrome refractors, time to ride the wave! I'm a sucker for these wave refractors.

I especially dig 2015 Bowman Chrome, on the left there. Continuing from what I was talking about in yesterday's comments regarding how it's nearly always a design mistake to use foil for the player name.. I think that's one reason why collectors seem to agree that the Chrome version of a design typically looks better than the standard/flagship/paper. Chrome cards never have foil. In this example, 2015 Bowman (standard) kinda sucks because it's often hard to read the foil names. But the Chrome version looks great, one of my favorite designs of the past few years of any product. The moral of the story is card companies should refrain from using foil for player names. Logos and borders? Sure, fine. But not names!

Anyways, I was looking at cheap colored parallels from 2015 Bowman Chrome on COMC, and among the sea of unknowns, I found this blue wave Matt Chapman. A little surprised to find a solid card like this of the A's starting 3rd baseman for just 65 cents. Maybe one day I'll work on a parallel frankenset of 2015 Bowman Chrome since I dig them so much, but I think I need to put some other collecting projects to bed first.

The 2013 red wave David Holmberg was $1.25, which might seem like a lot to pay for a card of a guy I don't collect, who was released by the lowly Orioles in spring training, currently struggling with Colorado's Triple-A team? Well... 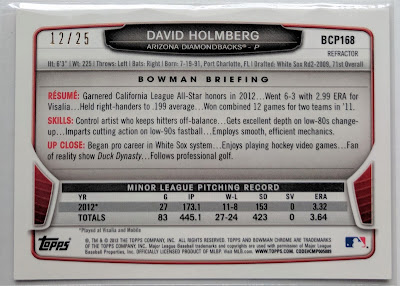 Christmas Card!
Not that I go around paying over a dollar for just any card stamped 12/25, but a neat looking refractor? Sure, probably. 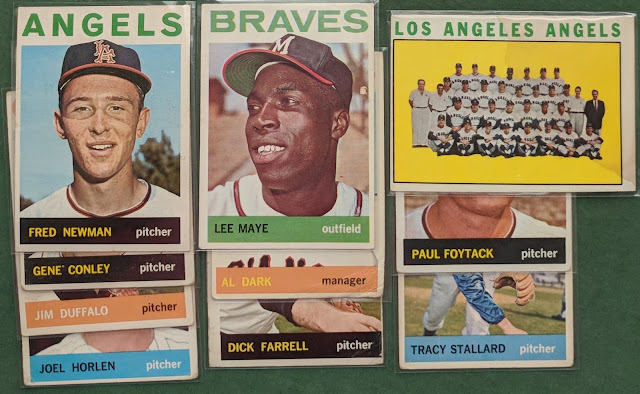 Let's close the post with this, a solid lot of '64 Topps needs from COMC. Just looking for good deals on cards that hopefully weren't too beat up. Some of these I wouldn't mind upgrading someday, but good enough for now. I also focused on high-numbers, trying to cross off a few more from the pesky last series. I'm scratching at the door of 2⁄3 complete with this set now. Probably won't wrap it up by the end of the year (especially with me being distracted by my '57 Topps project), but maybe sometime before the decade's out if I keep at it.

Well, thanks for reading, and always remember:

It ain't easy, livin' like ya want to
And it's so hard to find peace of mind
The way I see it, you've got to say shit
But don't forget to drop me a line