First, I need to admit that I hate whistling. Like, if a co-worker is whistling in the breakroom or something, he's instantly added to my shitlist. (And I can say "he" because women are never obnoxious enough to whistle in public, only entitled white men.) Drives me nuts! And it's not because I hate the happiness of others or anything. Hell, walk around with a constant huge-ass smile on your face, I'm cool with that. Gayly skip down the fucking halls, I might even join you. I just hate to hear people whistle.

But among the rare instances where I like whistling is in the Guns N' Roses song "Patience".


You know who are finding themselves in need of a little patience this season? Mets fans. 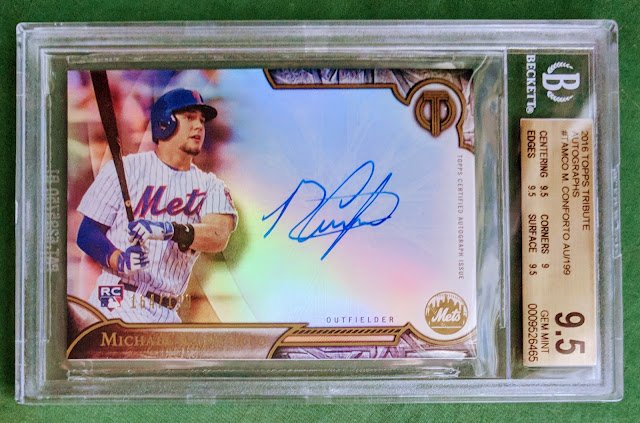 I recently won a card on eBay and took a look at other cards from the seller ending soon and ended up scoring myself a couple slabbed rookie autos, one of which is this Michael Conforto here. He's had a rough year, struggling to hit his weight in the first half. But he's only 25 and I still believe in him and expect him to have a solid career in the long run. Plus he's a Pacific Northwest kid out of Oregon State. So I'm ok taking a flyer on this /199 RC auto 2016 Topps Tribute for probably less than a quarter of what it was going for at the peak of his hype a while back. 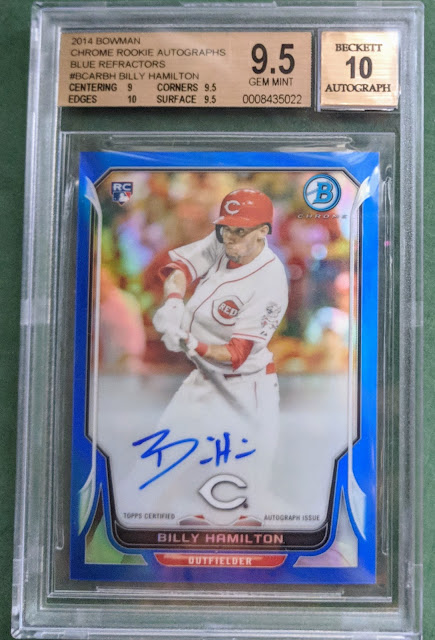 And the other card I ended up snagging was this Billy Hamilton 2014 Bowman Chrome blue refractor auto. Like the Mets, Reds fans are needing a little patience this season (and before and beyond), but at least they've been respectable since a managerial change.

Billy is known for his speed on the bases and great catches in center, though his hitting is always the big question mark with him. "You can't steal first base," as they say.

Still though, I've always been a fan of speedsters since my youthful days running track, so I've got a decent little PC of the guy. And this beautiful card is a terrific addition. I think I only had one auto of his prior to this, a logoless Christmas Card from Panini. And this slabbed /250 blue refractor might overtake that one as best card of the PC.

Hopefully with a little patience Conforto and Hamilton will blossom into greats of the game for the next several years and these "price of a blaster" pickups will end up looking like incredible deals pretty soon. Or maybe they won't, but whatever.. I think they're cool cards regardless.


I've had this song stuck in my head for the past couple days now. It's not GNR and doesn't really fit here, but I'm throwing it into the post anyway, hoping to get it stuck in your head too.

Enjoy your weekend, everybody! Card show weekend for me, though it might be an arduous task for me to make it due to 90 degree temperatures and the fact my wife has dibs on the car, so I'd have to use public transit again. If I'm not feeling it in the morning, I might sit this one out.
Posted by defgav at 5:02 PM