Like a zombie's hand reaching out of the grave, Bob Walk The Plank may be dead, but Matthew Scott is still making his presence felt in the cardsphere. 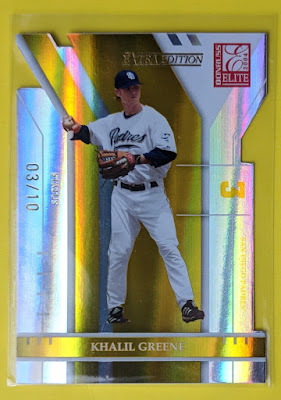 Khalil Greene is one of my favorite under-the-radar PCs, and this shiny die-cut 2004 Donruss Elite card #'d 3/10 is a sweet addition. 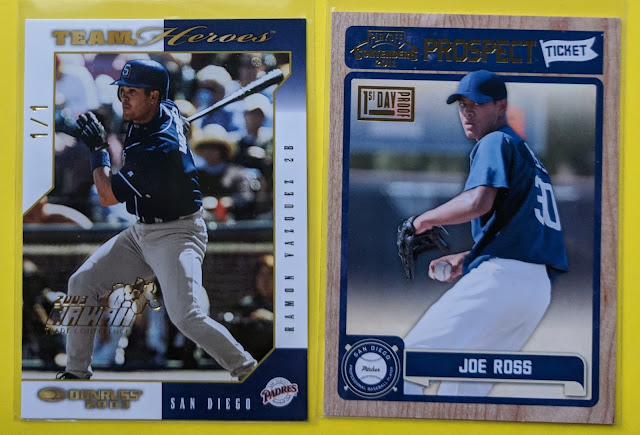 And cool to add a 1/1 Padres card in the form of this 2003 Hawaii Trade Conference stamped Ramón Vázquez. Gotta admit I don't have much recollection of the guy, but he did stick around for 9 years playing for 6 different teams, seeing his most action in San Diego during '02 and '03.

Joe Ross is a guy I kinda/sorta collect, so that's a nice one, too. It's a 1st Day Proof parallel #'d 8/10 on the back. Joe went to the Nationals in the big Wil Myers/Trea Turner 3-way trade, and is out all of 2018 due to Tommy John surgery. Hopefully he can bounce back next season and get his career back on track. 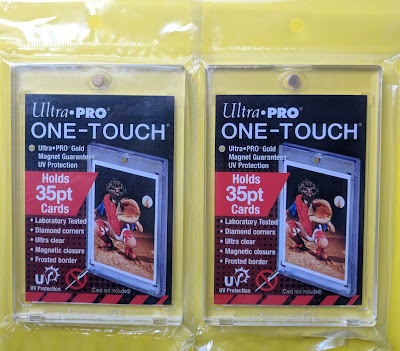 Wow, a couple new one-touch cases.. that's something I can't recall receiving in trade before (though Billy has sent me used one-touches in the past). I'll definitely put these to good use.

Big thanks, Matt! A return from me should be showing up any day now.

Next up is a win from Wes. He's been running a string of contests at his Area 40 blog, and I was lucky enough to come up on the randomizer recently for a graded basketball card that was in the pot. 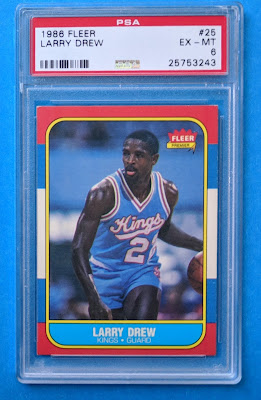 I think this is my first-ever 1986 Fleer Basketball card, which is pretty cool. Of course the Michael Jordan card is the one everybody wants from that set. Drew played in the NBA for a decade and then went into coaching. He was part of the Cav's organization when they won it all in 2016.

Thanks for the generosity, Wes! 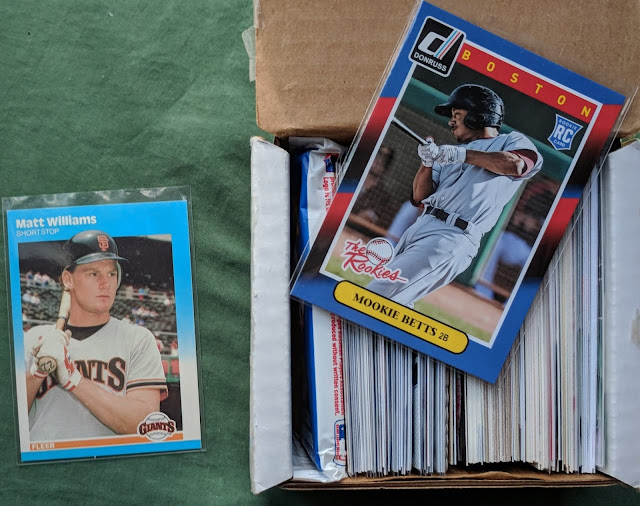 Among other incoming cards over the past week was a little one-card trade with a reader named James H. who knocked Matt Williams off my 1987 Fleer Update needs (now down to just Burks, Steve Carlton, Cecil Fielder, and Minton).

Also got a nice box of cards from an in-person swap with Kerry featuring my haul from his big 10th Anniversary Free Group Break plus more, but I think that's gonna have to get its own post at a later date because there's a ton of good stuff in there I still need to sort through.

If you follow me on Twitter [ @breakdowncards ], you know I've been going strong cranking out more gif cards, typically tied in with some "this day in baseball" history. If you're not on Twitter, well, allow me to round up these recent animated tweets for you now. (I also like posting them to my blog as like a backup and so I can easily find them later.)

7/16: Hey, we all embarrass ourselves at work from time to time. On this day in 1990, Steve "Psycho" Lyons absentmindedly dropped trou in front of 14,770 fans at Tiger Stadium to brush away dirt after diving into first to beat out a bunt.

7/21: Remembering Dave Henderson on what would have been his 60th birthday. Likely would've been '86 WS MVP if not for Buckner's blunder. Got redemption in '89 with A's. Always had a big smile and loved playing the game. R.I.P. Hendu.

[This tweet was the most popular of the ones in this post, racking up many likes and retweets. It also has a typo, as I bungled Yaz's last name on the card, making me feel quite the fool. Luckily, I think the majority of folks never noticed. But I'll have to redo it someday, taking out that extra E in the middle.]

7/23: And if you're talking about Mark Buehrle's perfect game in 2009, you gotta give credit to Dewayne Wise for keeping it alive with an incredible catch for the 1st out of the 9th inning, robbing Gabe Kapler of a home run.

[Coincidentally a lot of Red/White Sox among this batch.]

7/24: George Brett's infamous "Pine Tar Game" at Yankee Stadium happened on this day back in 1983. After a go-ahead home run off Goose with 2 outs in the 9th, the umps call Brett out for too much pine tar on his bat, giving NY the win. The AL prez overrules and Royals eventually win.


That's it for now. Thanks for reading.
Posted by defgav at 4:04 PM