Blog Talk: blogs and the blogging bloggers who blog them

I didn't set out to be a daily blogger in 2014, but here we are on January 24th and this post'll make a whopping 21 posts for the month, a new record for me! I guess after pushing myself over deadlines in the 12 Days of Christmas Cards series last month, I've been able to relax and the posts just seem to come easier. Or maybe I'm just used to "needing to get a post out" everyday now.

I've also been drafting up a new series of posts that I think will kick off February 7th and run daily for a little while, but I should hopefully have the gist of it done by then so as not to stress too much to keep with the daily schedule. I don't want to give it away yet, but I think people are gonna like it! (Nothing to do with the Olympics, which also starts around that time. But good guess!)

Hey, Baseball Card Breakdown is just about at the 50-follower milestone! Hooray! (Hey--You there, reading and not a follower.. why not be lucky #50?! Do it!!) I gotta think that's very good for a baseball card blog that's been around for less than a year. As a relative newbie to the blogosphere, it's hard for me to get a grasp of the state of card blogging. I know there has been some dissolving off into other avenues, such as Twitter and the like.

I'm not much into Twitter. I was on there for a year or two around 2010, but gave it up and haven't really gone back since. Just took up too much of my time. When I was on there, though, I didn't do anything with cards or sports.. I mostly just followed funny comedians and some bands and online friends. As far as my tweets, it was mostly updates for my "band", but since I don't do much with music these days, there's not much for me to promote in that area. But anyways, don't expect to see BCB on Twitter anytime soon.

I do wish Blogger would do some updating with their framework, though. It needs to get brought into 2014. A main complaint: I can't get a notification when someone replies to a comment I left on their blog, so I've got to remember to check back on a post I've already read. But if I post a comment on my own blog, I get an email notifying me. I get an email telling me that I commented. What the shit is the point of that? Gee, thanks, Blogger. I didn't know that I just replied to a comment. Thanks sooo much for the heads up. It's annoying and apparently no way to turn that off in the preferences. I suppose I could set up a filter in my email to automatically delete them, but still, lame.

It'd also be nice if a "Like" mechanism could be better integrated. And I'm not necessarily talking about syncing up more with Google+. I don't have much interest in Google+ and it's not cool that Google keeps trying to strong-arm people into using it by linking it up with their other sites and services.

Another annoyance: the anti-spam captcha (or whatever it's called).. They need to improve that. I like the recent change to where it's usually random numbers. That's a bit easier to deal with. But what would be a much better measure to weed out spambots without frustrating real users would be a simple question that the blog owner could enter and edit. Like, "What year did the Mets last win the World Series?" Someone entering a comment just types in "1986" and everything's fine. If/when the bots eventually figure it out, you just edit to a different question. This has proven to work very well with keeping spambots off message boards.

What would be really great is if regular readers of a blog could be added to a pre-approved list so they could comment freely without worry about typing in some gibberish password thing. Like, you answer a security question when you first follow a blog, and after that, you're free to post comments on that blog with no more b.s. If you're a troll or a spambot who happened to get by the security question, the blog owner could remove/block you. No fuss, no muss.

Stuff like this would be easy for Blogger to put into place, and make a lot of people happy. I guess they're just lazy.

Let's talk about Labels. I notice some bloggers go nuts with a dozen labels on every post, while other bloggers use none or very little. When I first started out, I was better about trying to add team labels and specific players, but these days, not so much. I figure if some Brewers fan wants to read every old post of mine about the Brewers, he can use the search box on the sidebar. I mainly use the labels for reoccurring features, like Refraction Action and the like. But I guess I'm curious if any of you guys have thoughts on labels. As readers, do you often utilize labels for reading old posts?

Speaking of other sites to gravitate to, I did recently start up a Tumblr a few months ago. It was going to be a place for me to recycle animated gifs of baseball cards that I made for Baseball Card Breakdown. But Tumblr started giving me errors when I tried to upload large files, and I don't think I picked up any followers, so I quickly lost interest.

But blogging here is still fun. You guys are cool. I hope you keep on reading and keep on posting.

Let's see.. anything else to ramble about?

Oh, I wanted to congratulate Night Owl on again winning Blog of the Year! I know I've kissed his butt a few times in the past, but he really does run a great blog that's consistently fun and interesting. I first got into the blogosphere a couple years ago by stumbling upon the seminal 1988 Topps blog, and through that, stumbled upon Night Owl's Cards. For a while, his was basically the only blog I read, though I've since expanded my reading, pretty much keeping up with everybody in my blogroll, plus checking in with a few others here and there.

While I didn't get a chance to campaign for any votes, Baseball Card Breakdown also got nominated for blog of the year! That was a nice honor. And even better because it was Greg (Night Owl) who nominated me. Aw, that makes my heart flutter. Like Mean Joe Green throwing me a towel after I gave him a Coke. If the guy with the best blog says mine is the best blog, I think that means I automatically win. Haha.. Of course my blog didn't get many votes, but for a rookie like myself, it's still very cool to be thrown in with that list of great blogs who got nominated. Maybe if there was a "best new blog of 2013" category, I would have had a fighting chance. (In baseball terms, I couldn't compete in MVP voting, but would probably contend for ROY. Aw, thinking about it.. now I really want to be able to add a cool Rookie Trophy image to my blog. Could somebody do a poll for best new baseball card blog of 2013, and then let me know when it's live so I could campaign hard for it. Then hopefully I'll win and get a trophy pic to add to my blog. Anybody? Daniel? Come on, do it! For me!)

But enough competitiveness and horn-tooting. Thanks again to Greg and the rest of you few readers out there. While I doubt I'll be able to keep up this near-daily pace, I'll do my best to post cool stuff on the regular.

I guess that's about it for this rambling post. I should add a picture of a card. It's always sad when a card blog posts without including at least one card.

Actually, hold up.. here are a bunch of cards to look at! 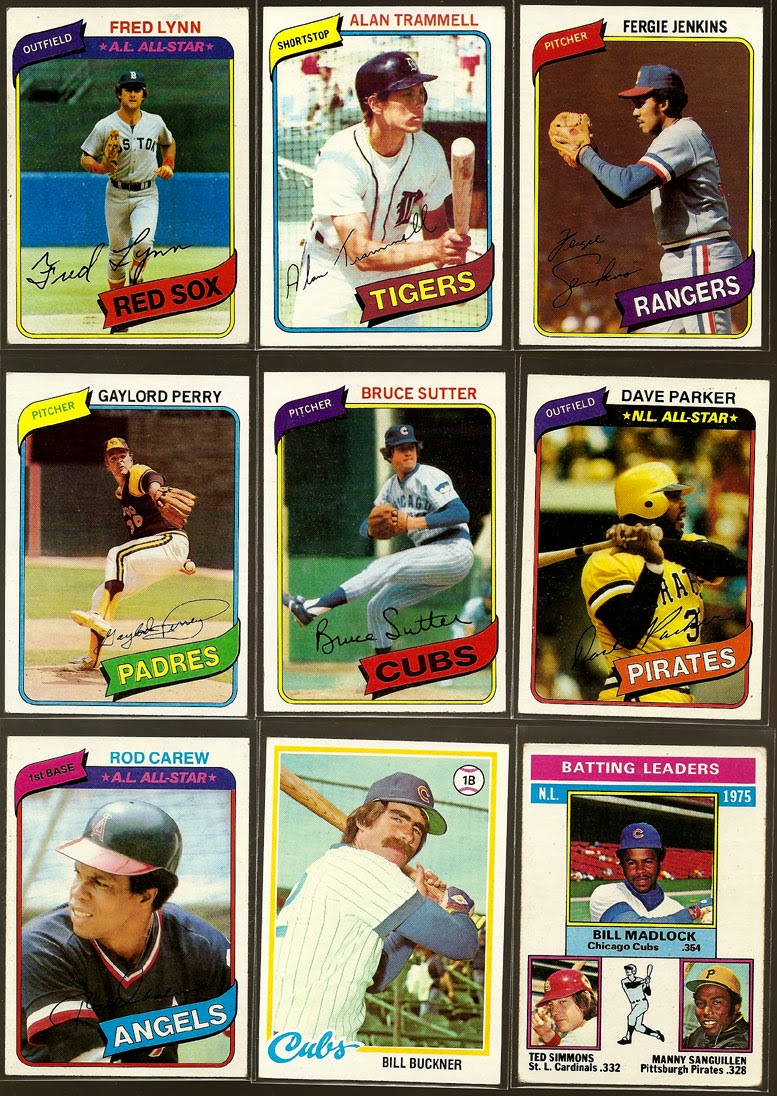 Nice lot of HOFers and HOVGers. Now check out my Berra rookie card! 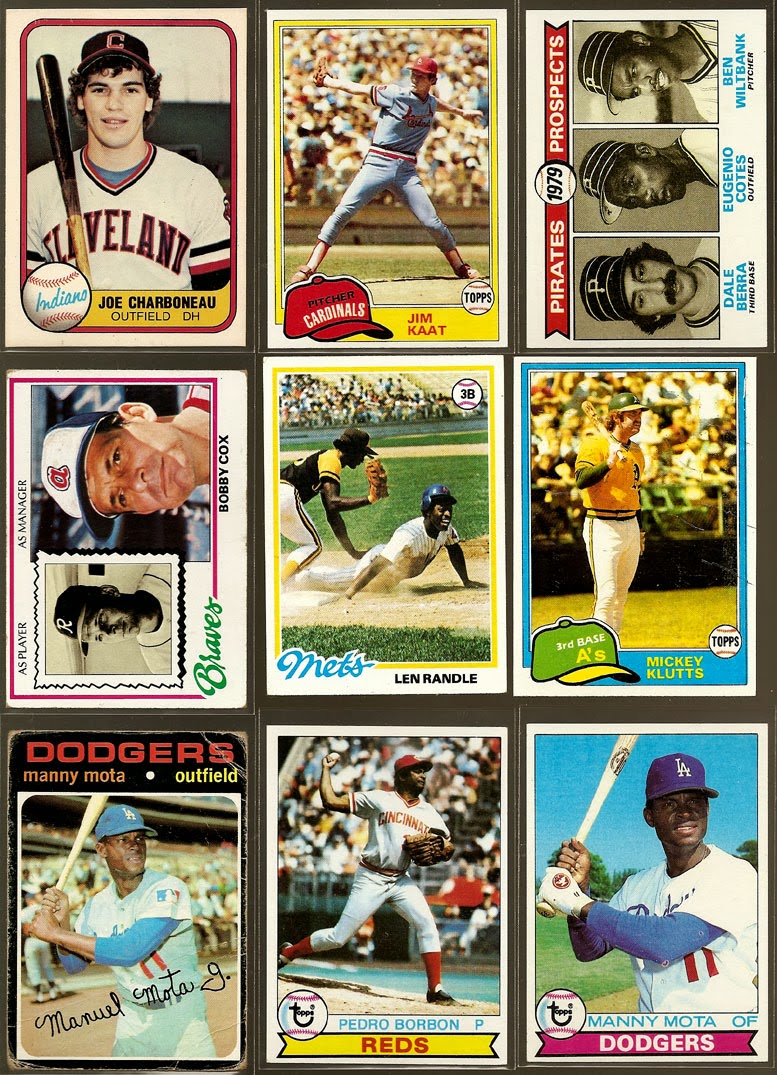 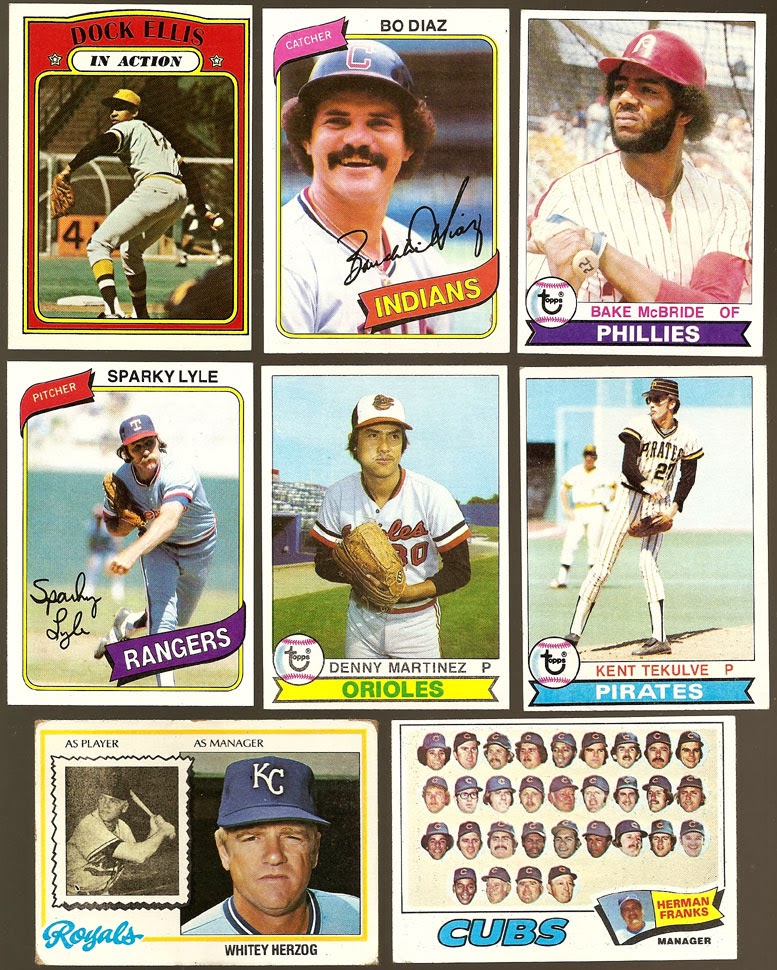 All these above cards were favorites from a sweet Listia lot that I scanned back in November. They were for a "Some Random Old Cards week" series of posts that I abandoned on that Wednesday. So up there you see what was in store for the rest of the week that I didn't get around to posting. I believe this here is what's known in the blogging community as a "scan dump", a phenomena wherein a blogger puts up some old card scans that have been sitting around, waiting patiently for an opportunity to be posted. Feels good!

Thanks again for reading.
Posted by defgav at 5:05 PM