I thought the Post Office wasn't supposed to stop delivering mail on Saturdays until some point in the future? Apparently I'm "lucky" enough to be in the district of a beta-testing post office (or just a bad/lazy one), because it's a crapshoot if they bother giving me my mail on Saturdays anymore. I know darn well I had some cards due this past Saturday, plus an outgoing Netflix dvd waiting in vain to be picked up. Boo. 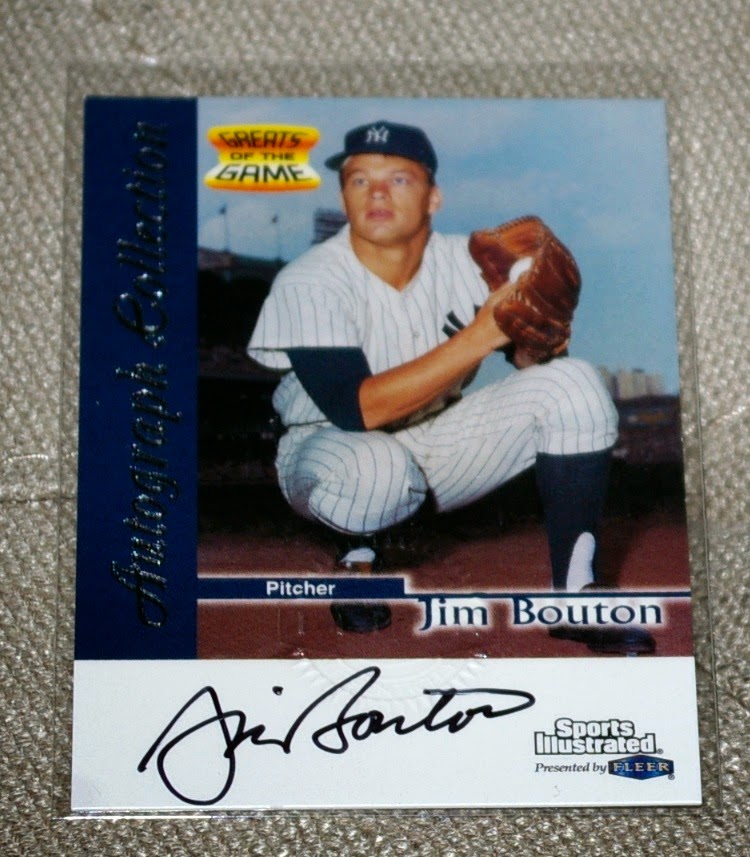 I have to admit I still haven't read his book Ball Four yet. I'm a pathetic excuse for a literate person, as I hardly ever read anything that's not on a computer monitor. But someday I'll read that book. I got renewed interest in Bouton recently thanks to the great Battered Bastards of Baseball doc streaming on Netflix. And now I've got his autograph! 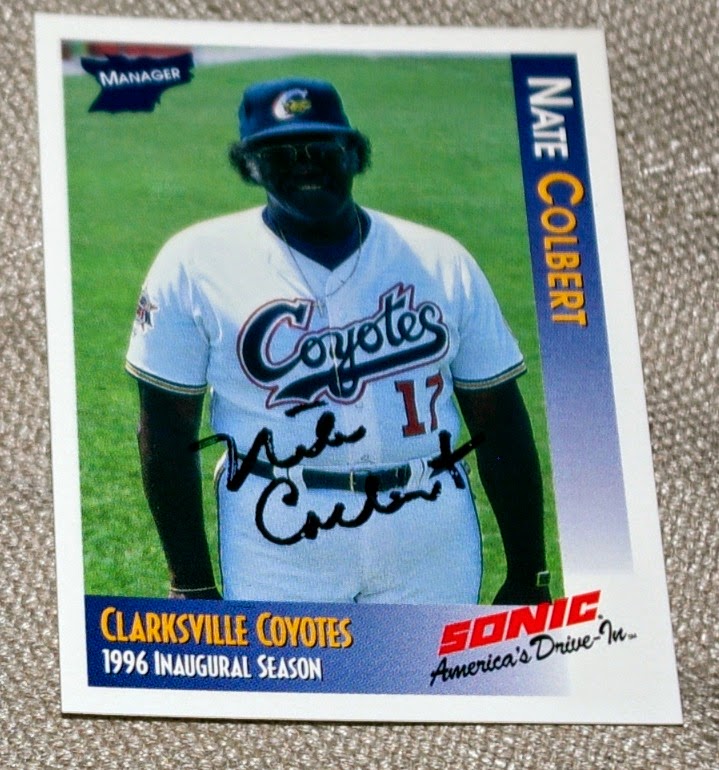 I knew Nate was a hitting coach in the minors in the late 80s and early 90s, but I wasn't aware he managed in the mid 90s until I saw this card on eBay for a few bucks. And as an added bonus, it's signed! 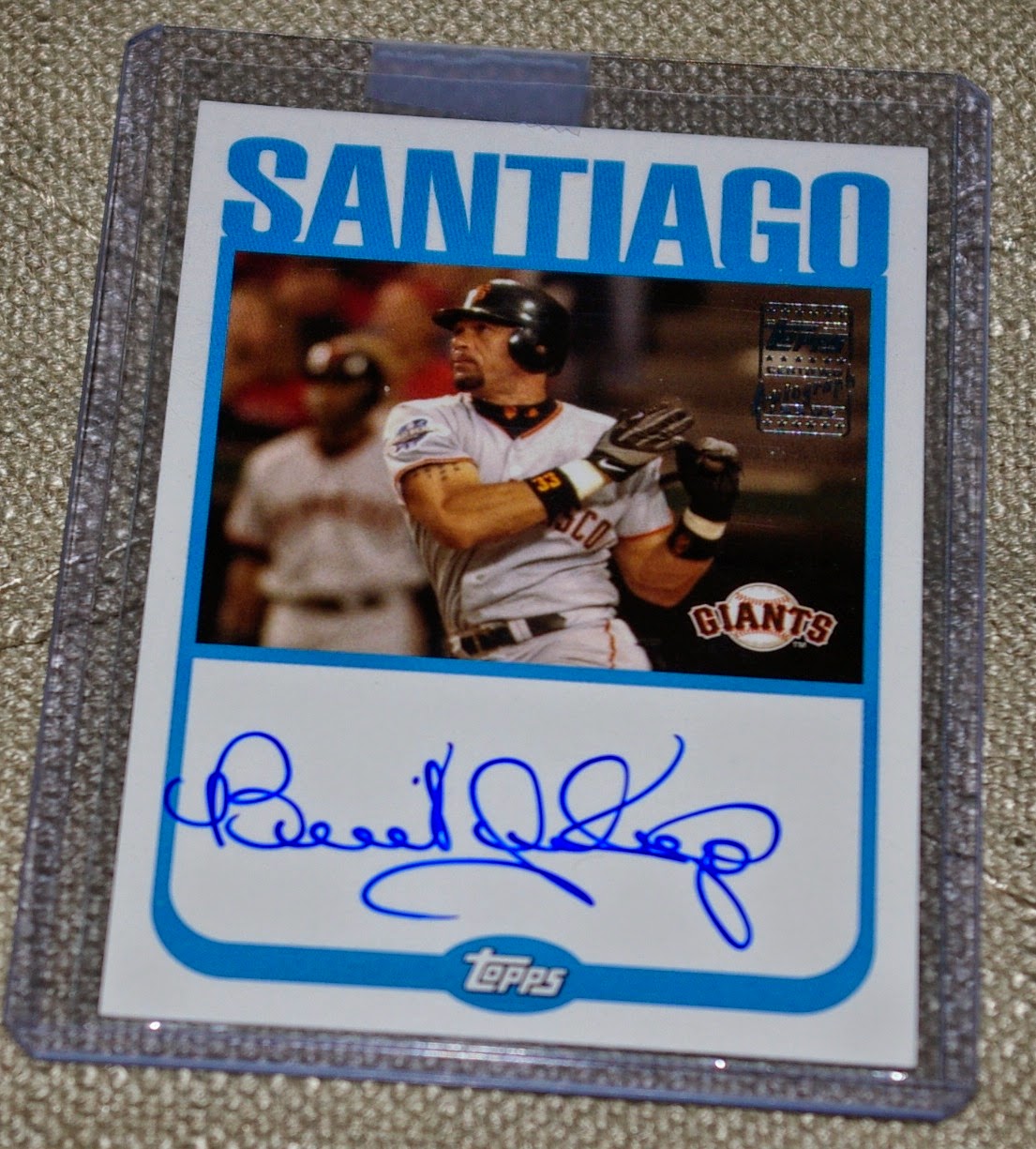 This was a throw-away Best Offer that ended up getting accepted. Cool. Of course I'm a Benito fan, mainly from his time in San Diego, but never really went out of my way for his cards before. But I like the look of these 2004 Topps autos. Very simple design with a nice big white box for the on-card signature.. and Benito's got a nice one!
(Oh, and pull-tab alert! The seller was nice enough to make a pull tab on the back of the piece of tape. Unfortunately I didn't notice till after snapping the photo. I wish I could give the seller 6 star feedback for that. Seriously, guys: Pull tabs!)

After those eBay wins, here's an incoming Sportlots order: 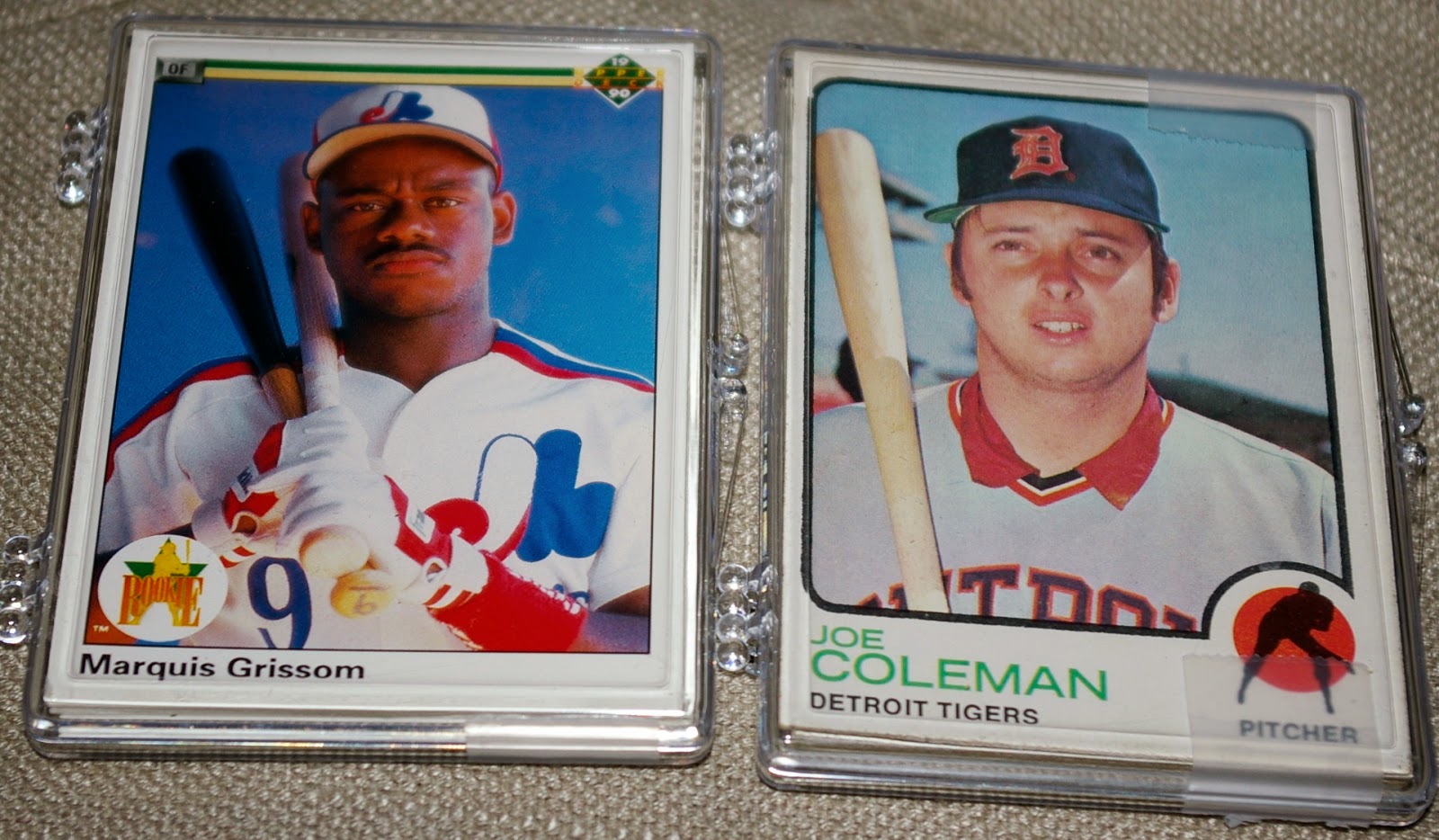 A nice bunch of 1990 Upper Deck Marquis Grissom cards to put towards my Marquis Mania project plus some needs for my 1973 Topps setbuild. I've nearly put the first half of that set to bed (ie, the cheapest/easiest to find cards). That'll help me out when digging through boxes at upcoming card shows, as I'll pretty much be able to flip past anything numbered under 330 without having to check my list.

Next, here's a recent Listia win for a few cents' worth of credits. 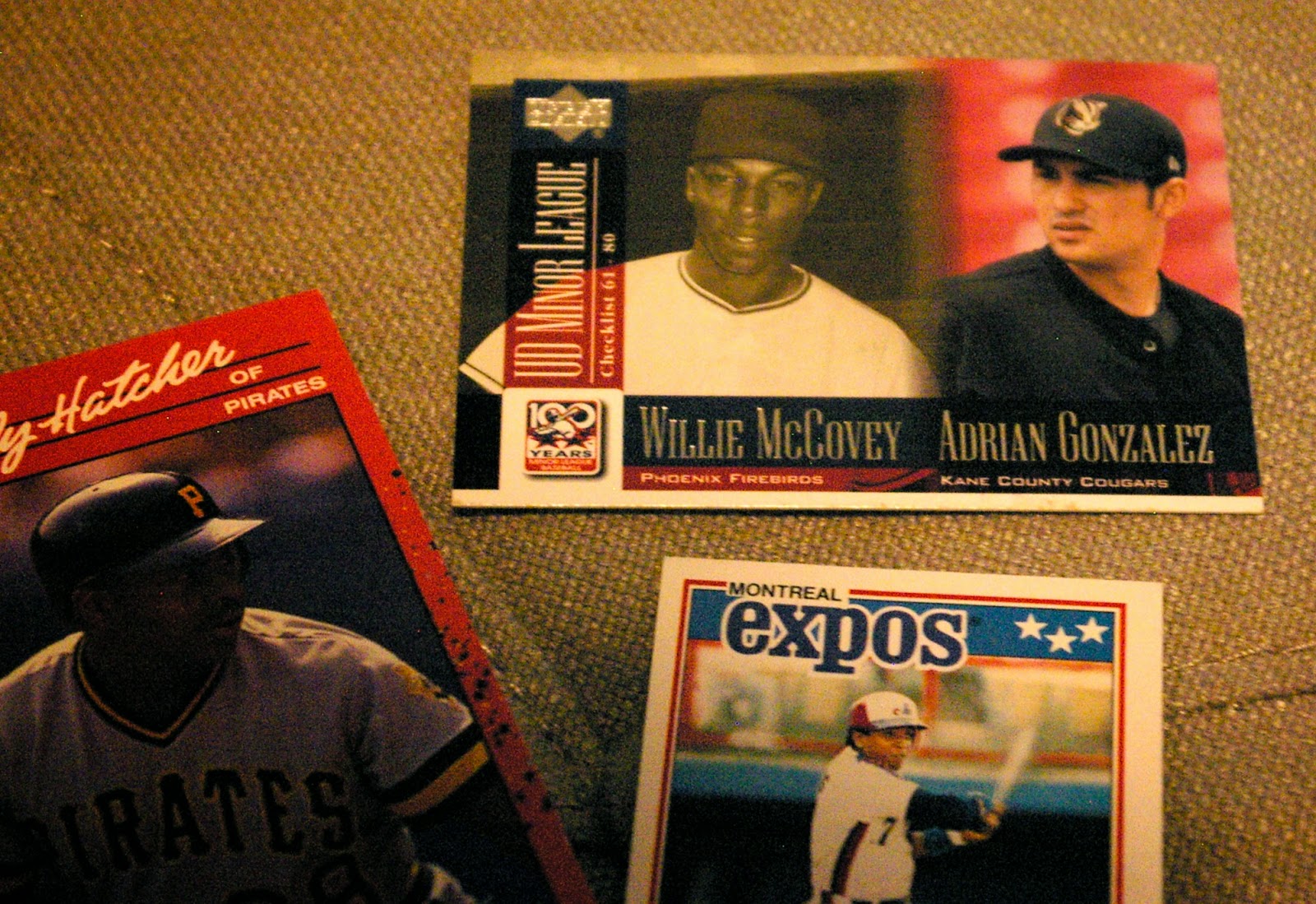 Two PC hits in one with the McCovey/Ardian combo. I think that's my earliest A-Gon card now, from 2001 Upper Deck Minors. Seller threw in a couple bonus cards, which even when junk wax, is always appreciated.

And now here's a Hoyling! 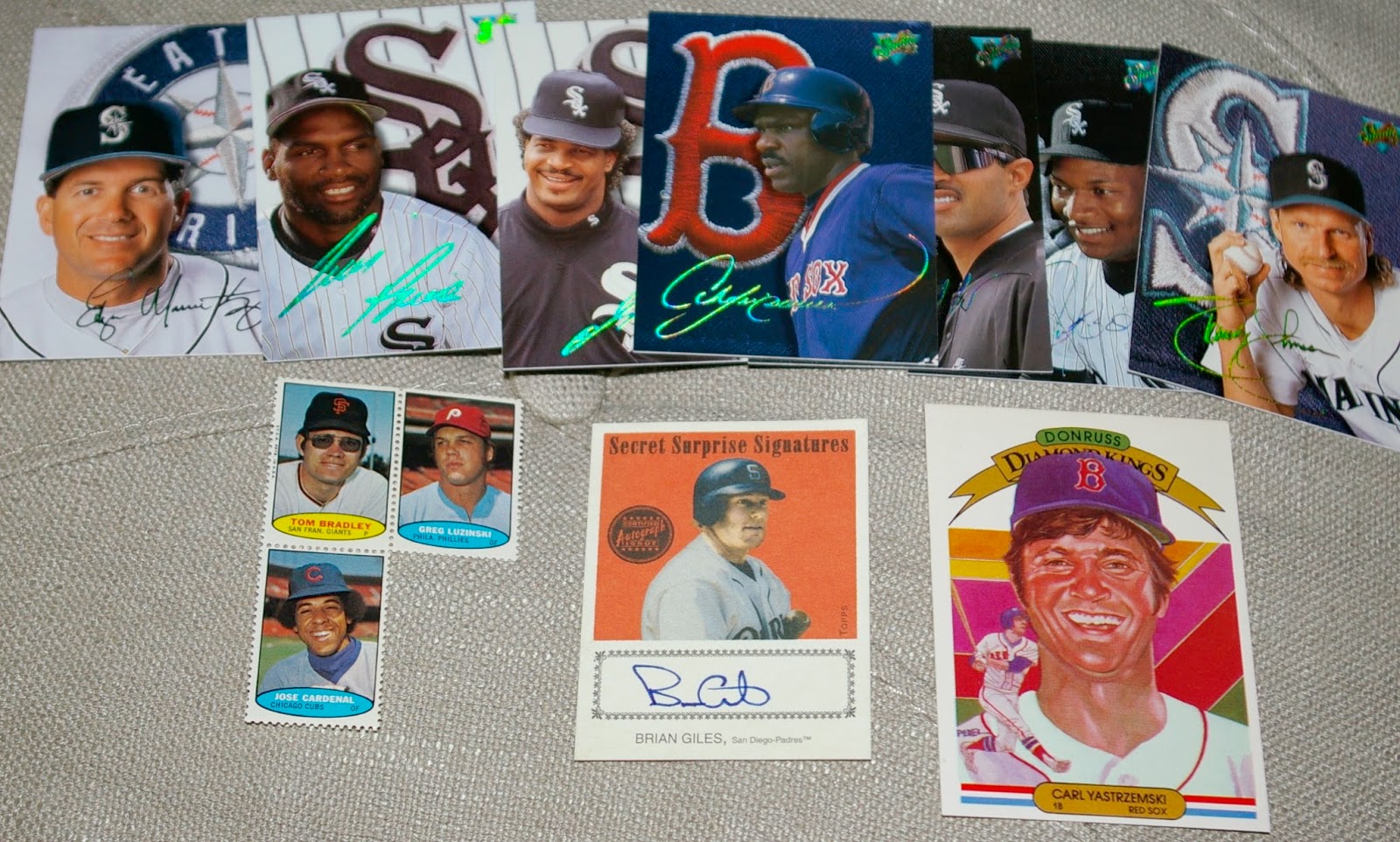 Mark dropped a batch of 93 Studio on me, plus some vintage Topps stamps, a Yaz DK, and probably the highlight, a Brian Giles auto. Secret Surprise, indeed! Thanks, Mark!

Finally, let's close out this mega mailday post with a trade package from Johnny's Trading Spot. 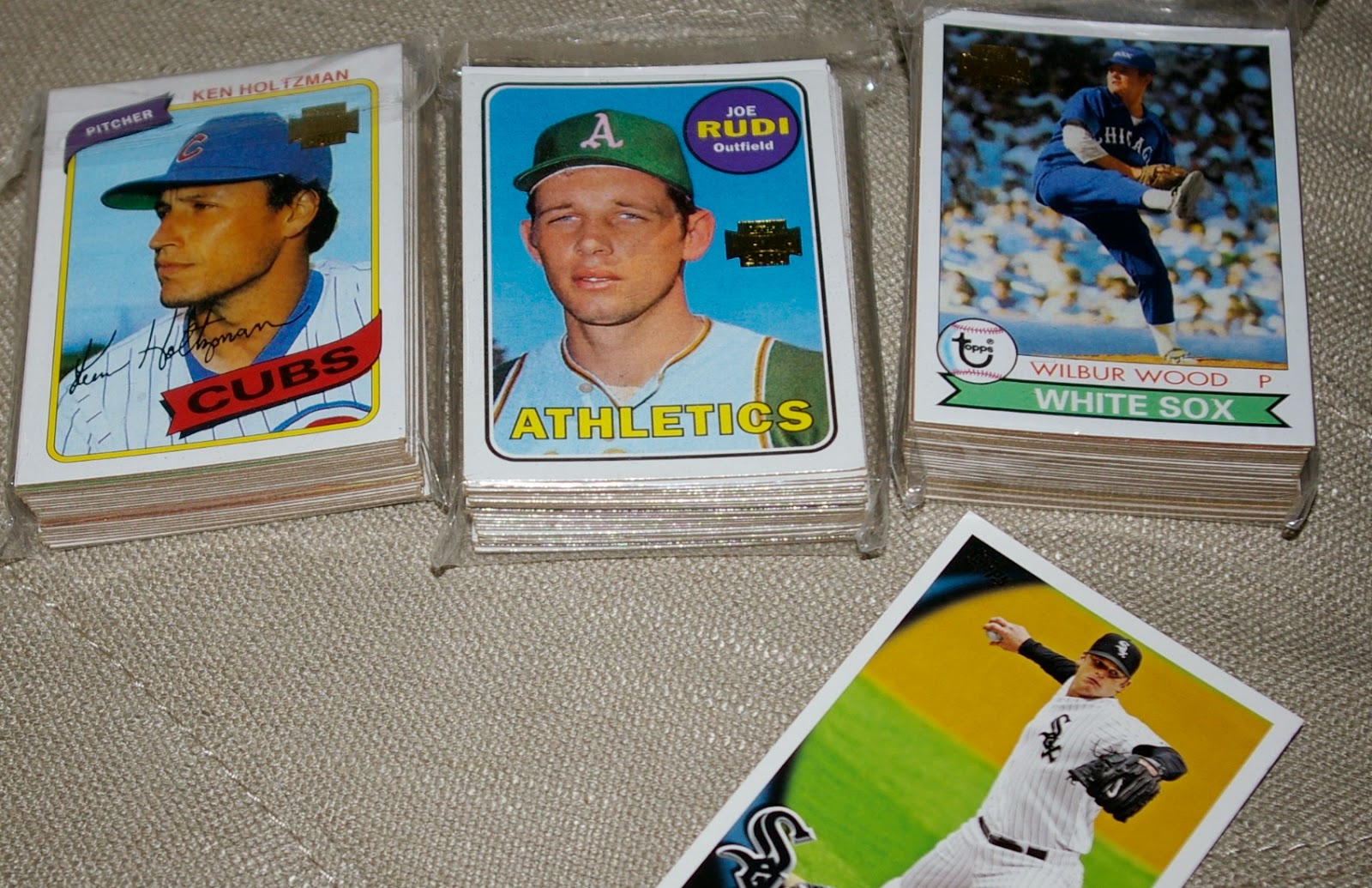 Three fat stacks of 2001 Archives for the set I'm working on! Plus a bonus Gavin Floyd to boot! Awesome! Big thanks, John. I'm excited to go through these stacks and ogle the sweet reprints. I'll send you back a big package of Braves very soon.

And so Monday, October 20, 2014 is in the books as a very good day for me receiving cards (though I would have been happy to get some of these a couple days prior, were it not for the flaky weekend postman.)
Posted by defgav at 5:07 PM