My collecting goal for this year is the same as it's always been: Make it through the year without adding any bobbleheads to my collection.

I'm happy to report I reached the goal for 2014. I still own zero bobbleheads. Hurray!

So recapping 2014 for me.. lifewise, it was a very good year. I got married for the first (hopefully only!) time (still going strong, happy to report). Along with the wedding came an incredible Hawaiian vacation, followed by a great reception party back home with lots of our family and friends. On the job front, I'm still a lowly temp, but at least I like my current assignment and was able to stick around all year.

As far as the hobby goes, that was great too. Added lots of cool cards to my collection. Made a bunch of trades. Had a lot of fun blogging and reading other card blogs.

Barring an employment shake-up (again, as a temp, I don't have a lot of job security), I expect to keep blogging strong through 2015. That said, I may very well fall back to 3 or 4 posts a week. December 2014 marked the first time in the blog's history that I posted everyday for a month (I had 30 posts back in May, but at least a couple of those were on the same day.) It was good getting in that groove, but don't want to get strapped in to feeling like I have to get a post out everyday. I've got other stuff I should also spend time on, including music, reading, art, exercise, whatever.

I did a lot of contests around the middle of 2014. I intend to do a bunch more in 2015. I'd like to tweak it so that it's weighted heavily for friends of the blog.. and by that I mean giving a nice handicap to folks who comment on my posts and trade with me. It seems with lots of my contests, the winner will be somebody who shows up out of nowhere, wins their prize, and then disappears back to whence he came, never to be heard from again. And that's fine, but I'd rather my contests be cool rewards for loyal readers.. (..and sure, help bring in some new folks who hopefully stick around and become loyal readers, too). So you lurkers out there, don't be shy about commenting here and there if you've got something to chime in with. Chances are it'll come back to benefit you down the line in a future contest. Maybe I'll do like Fuji has done in the past and randomize for a past date, then giveaway a prize to somebody who had commented on that post. Another idea is to reward traders who hit needs for my collection. I'm not sure. "Contest Season" probably won't start up till the summer, so I've got some time to figure out what I want to do.

I also have a fresh idea for revamping how I collect and how my wantlist looks for 2015. Give me a day or two to finish hammering it out, and I'll post about it. But I'm excited for it because it'll help me focus my collection while at the same time diversifying it. Paradoxical!

Anyways. The state of the blog is strong. God Bless America. Thanks for stopping by.

Here's the best most expensive card I bought this year in 2014: 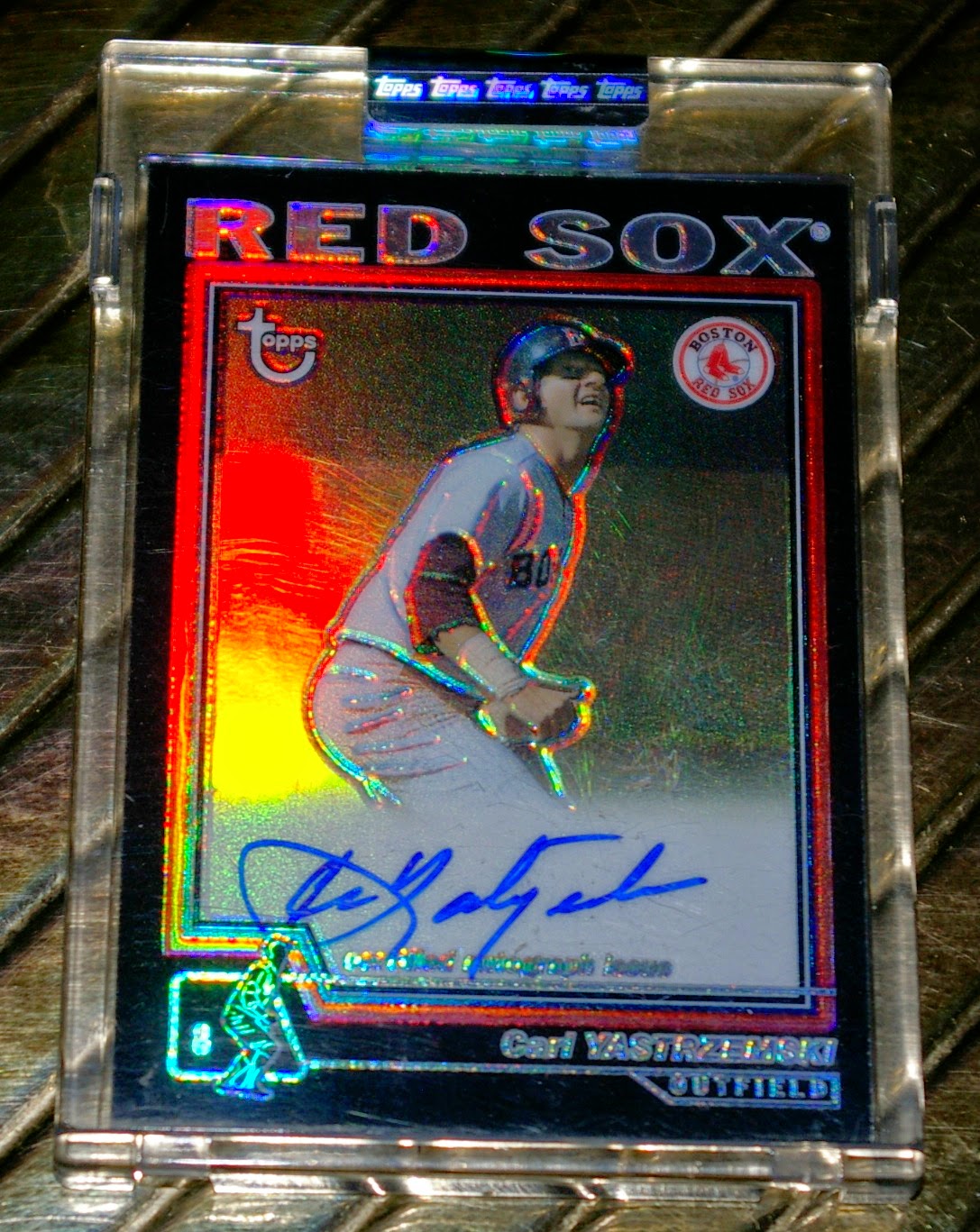 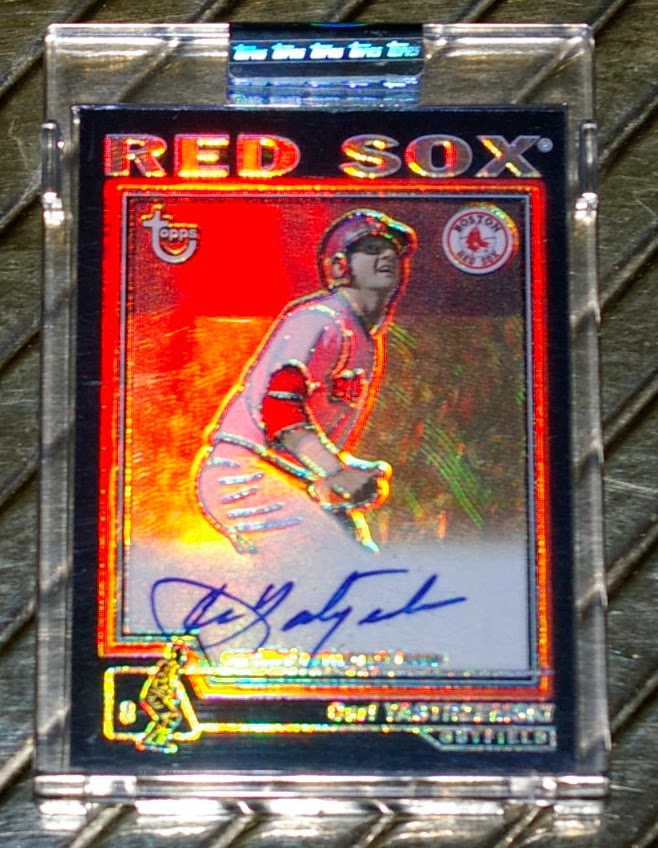 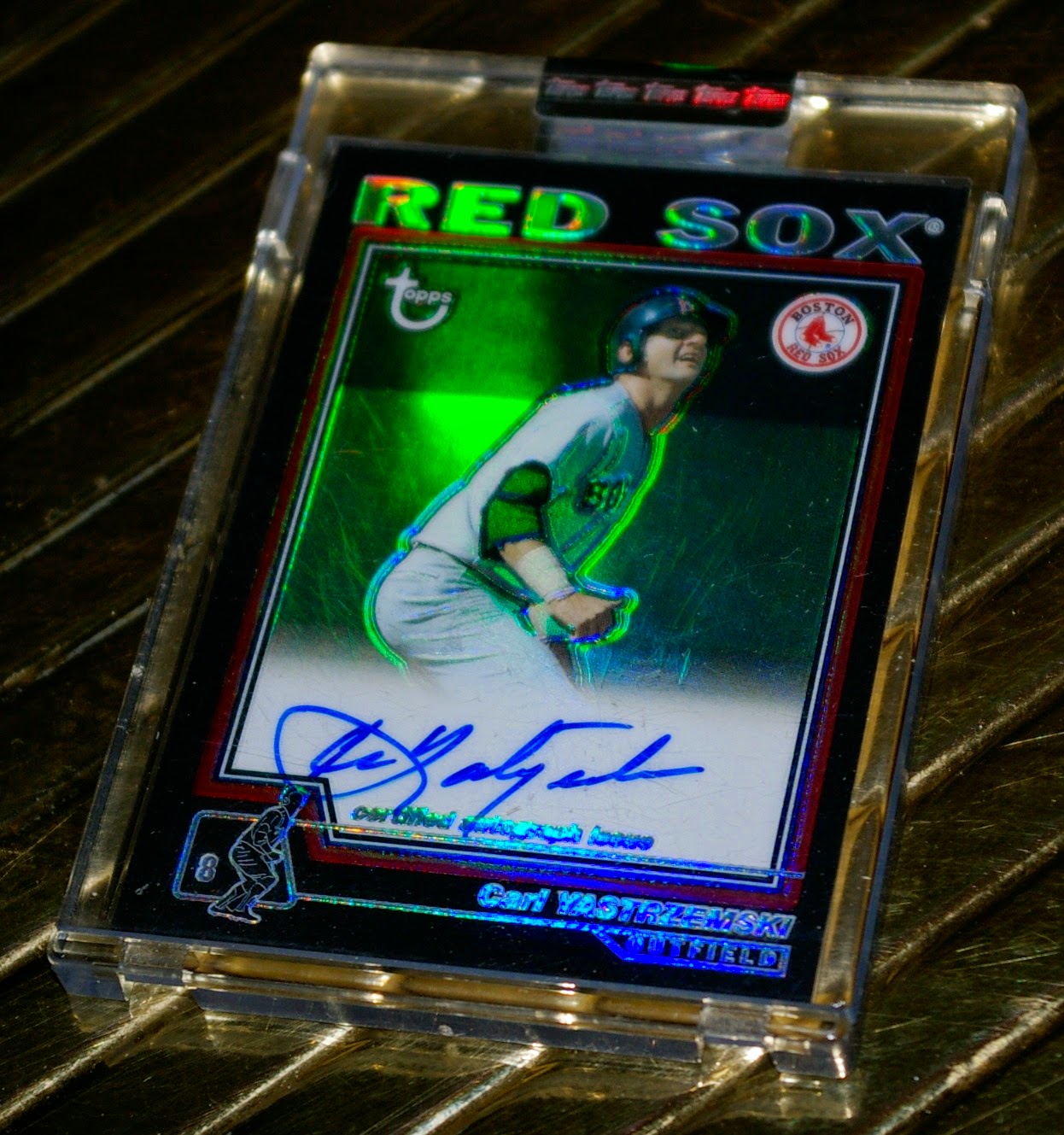 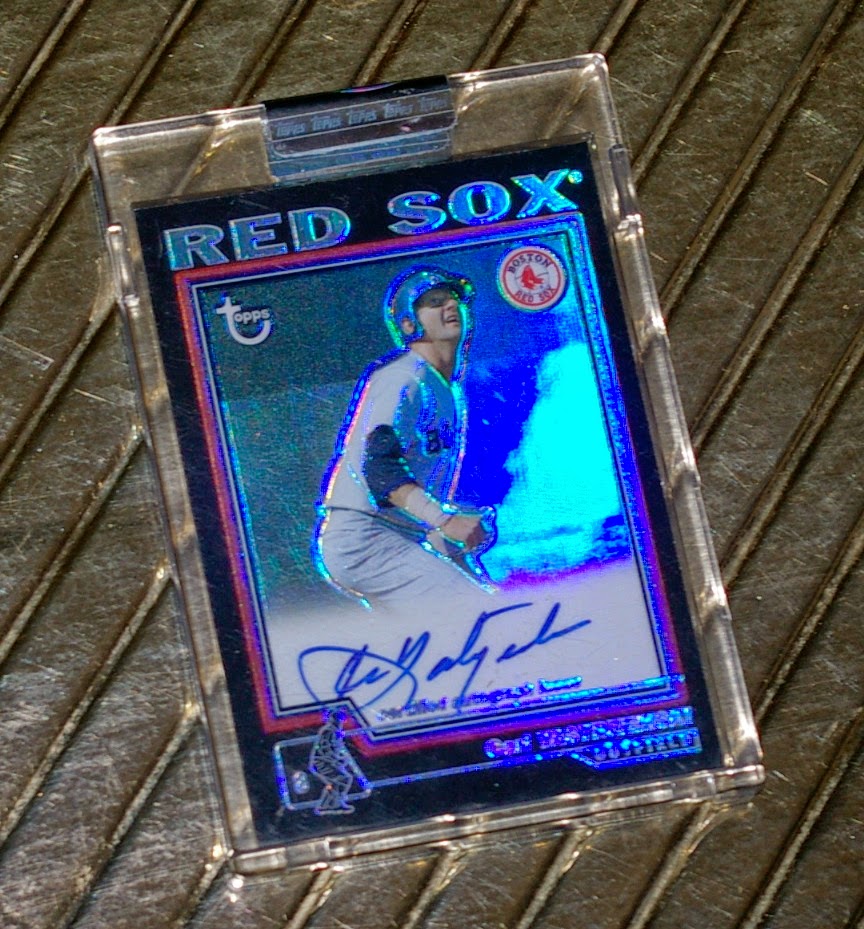 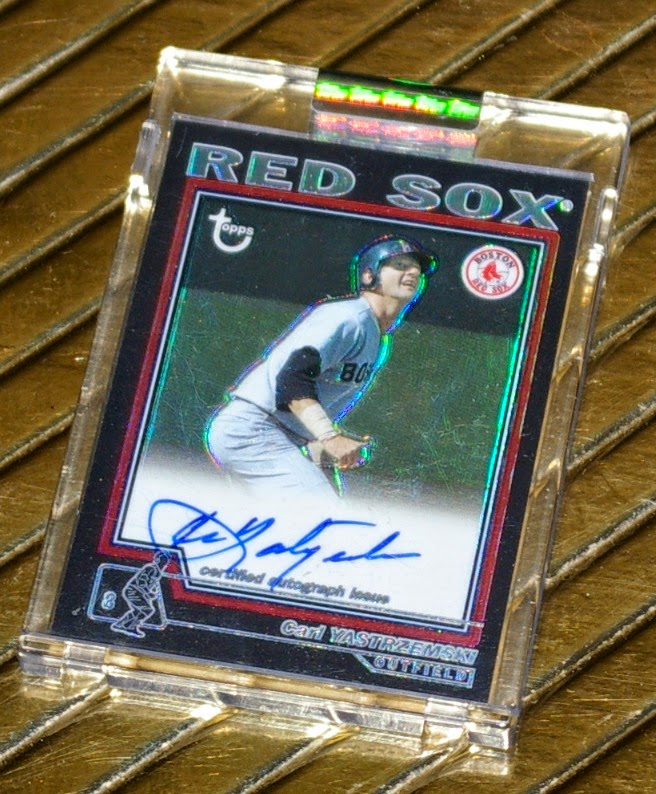 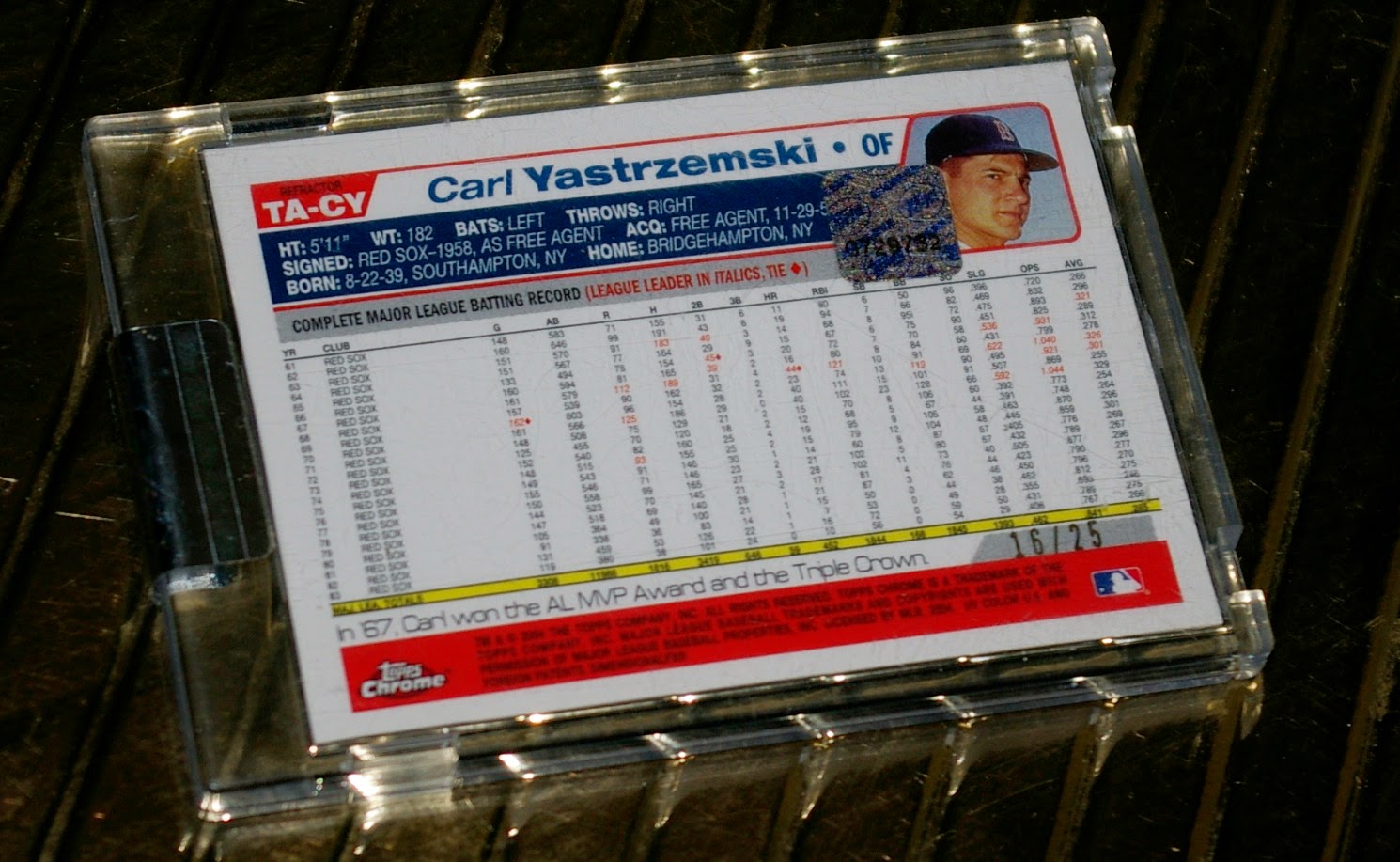 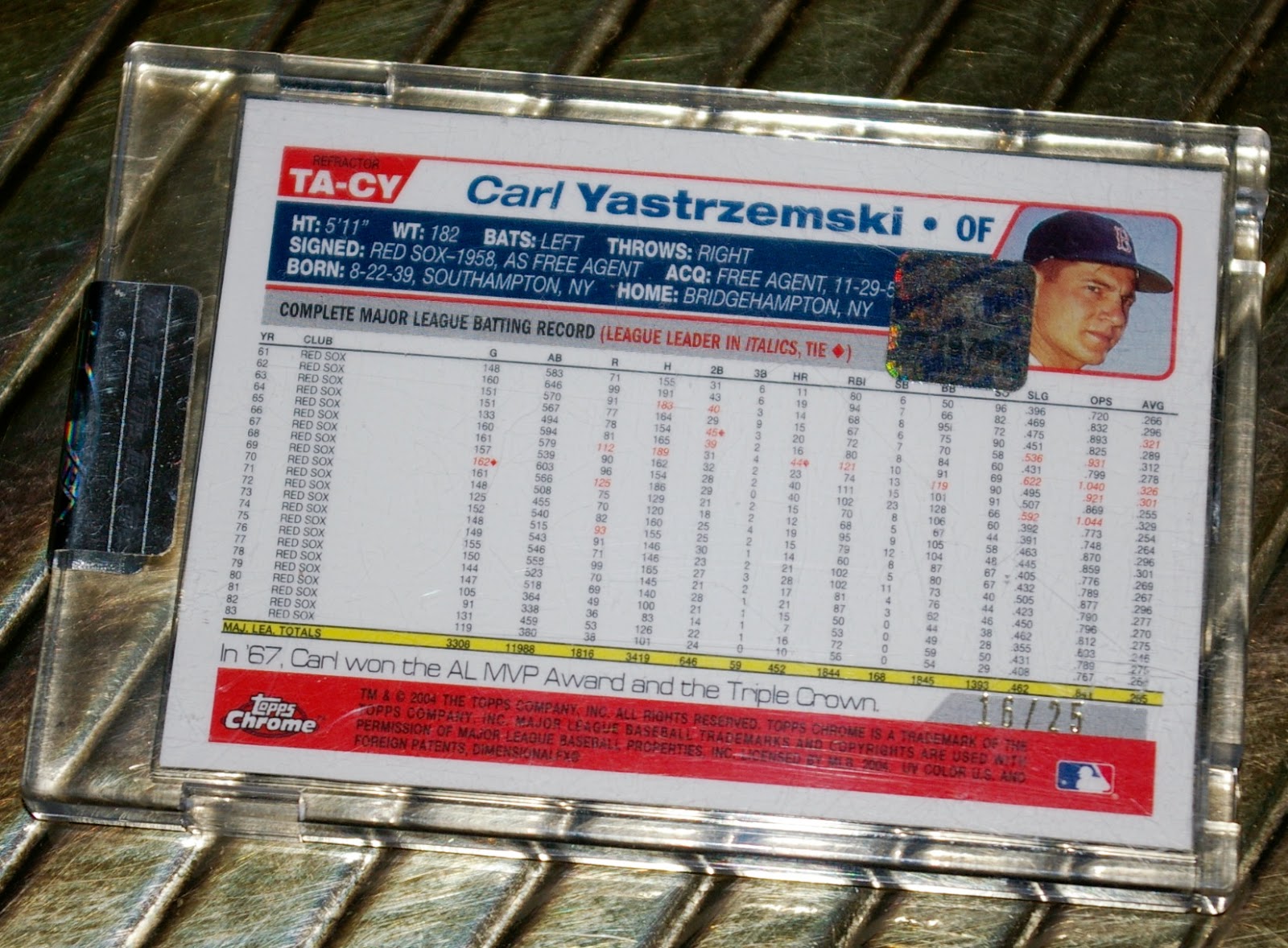 Yaz here is a nice card to check off my setbuild of 2004 Retired auto refractors.