Sorry for the long title, but it was either that or "more cards from the card show."

That's a quote from The Sandlot, which I just watched for the first time this past weekend. I know it's some of your guys's favorite movie, and as a baseball fan, it's a must-see. It came out just as I was leaving "childhood" so I missed the target demographic by a matter of months, and then it eluded me for many years somehow. But yes, now I've seen it and enjoyed it. (Should I bother with the sequel? I've read it's "more than just a bad film, it's an insult to the original." So maybe I'm better off skipping it.)

Anyways, here are some more cards I picked up at the recent card show for 50 cents each.

New HOF inductees, Pedro and Big Unit, both serial numbered on the back. I had another Randy Johnson card tentatively in my stack. It was #'d /500, whereas this one I chose to purchase was #'d /599. Normally I'd go for the "scarcer" of the two, all things being equal, but this was just a better looking card, with a nice refractor shine to it. 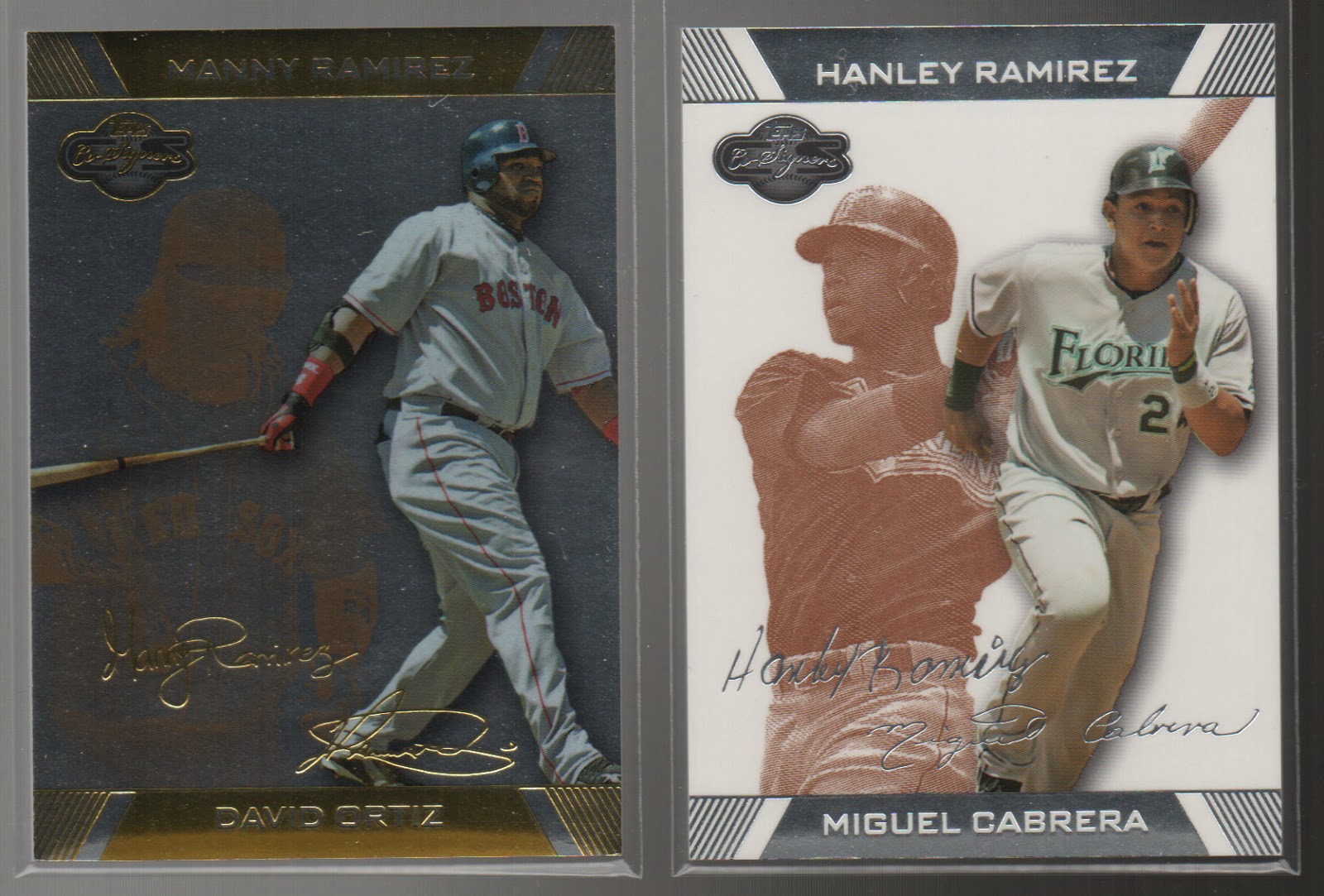 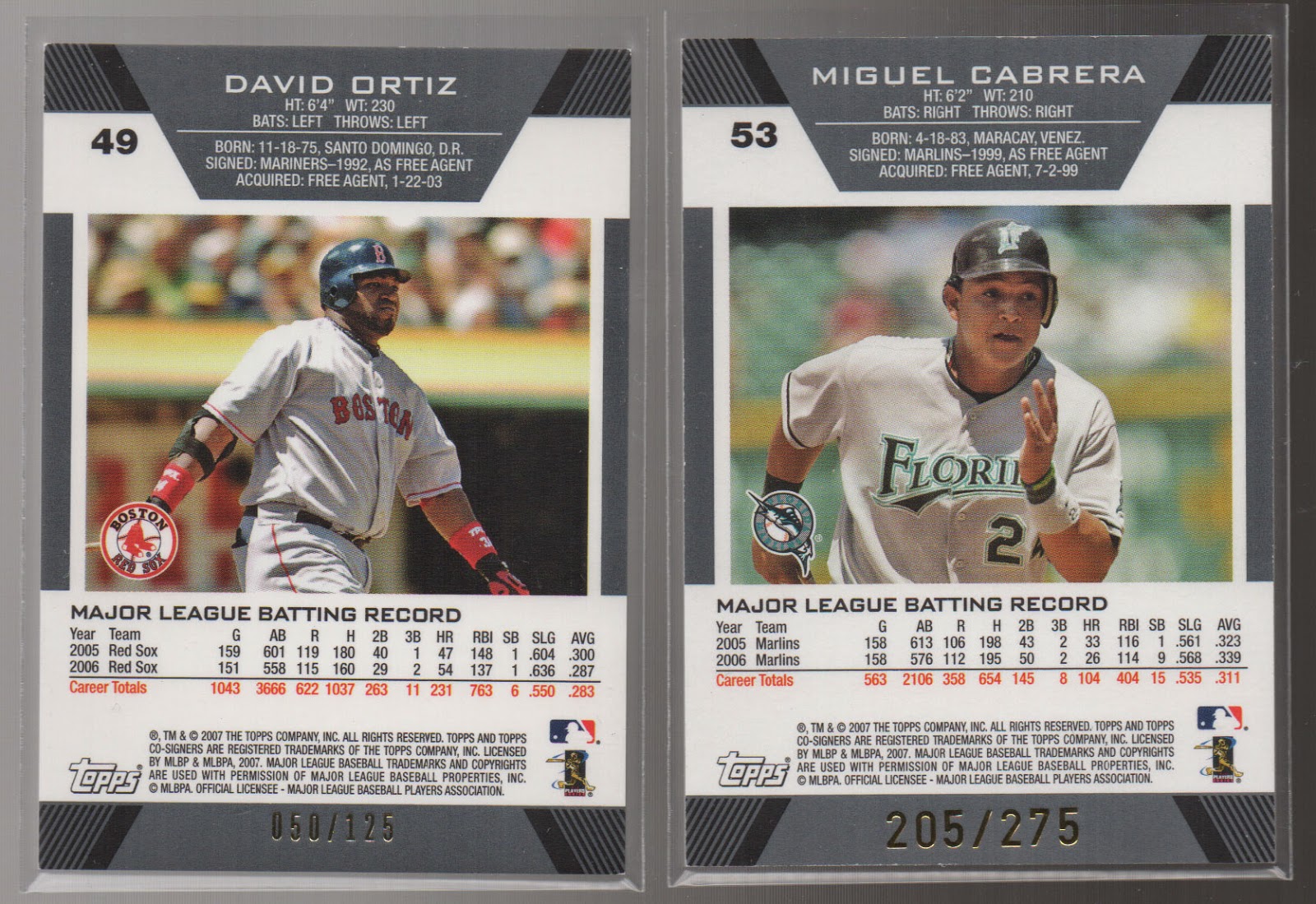 Here are a couple more numbered cards. Big Papi and Miggy (each with a Ramirez hiding out in the background). Both from the same insert set (one gold, one silver), though one has standard-sized text numbering and one is bolded (nice phat foil numbering). Funny.  Personally, I prefer a fat serial on the back, or slim on the front. But whatever. 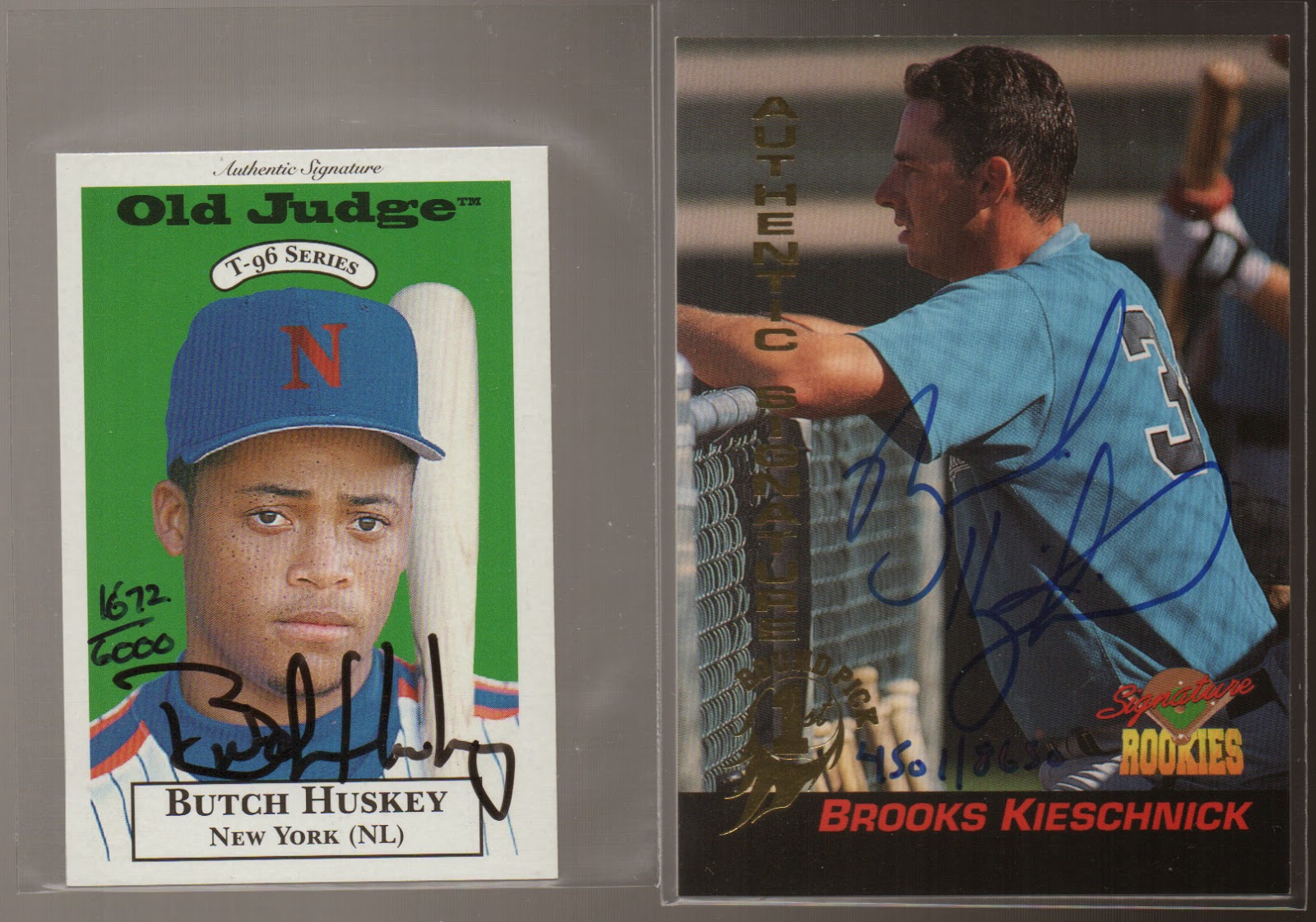 Autos! One of the best sports names ever, Butch Huskey! And my 3rd different Brooks Kieschnick auto (all from card shows out of the same discount bins). 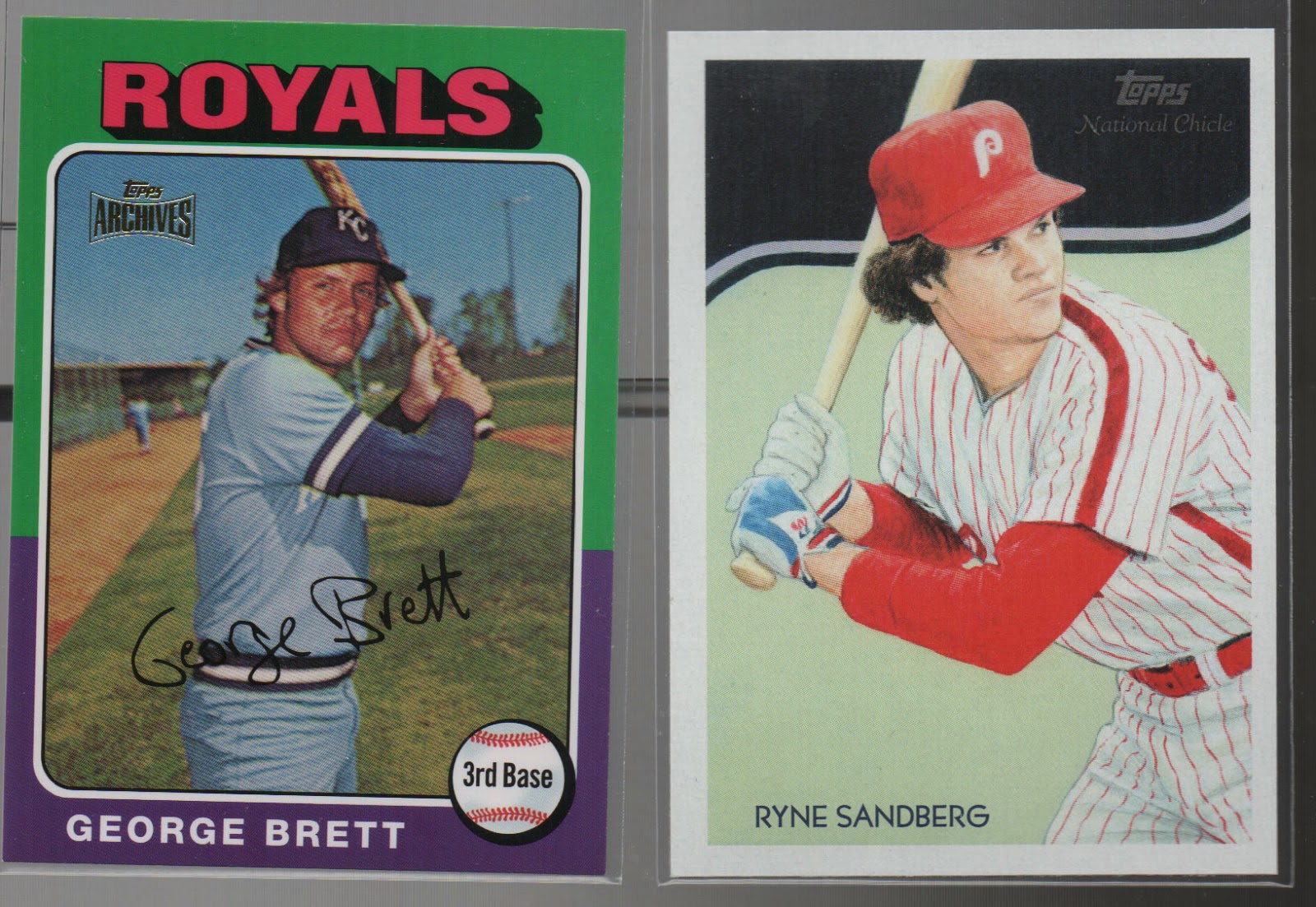 Someday I'll get a real Brett RC. For now, this Archives reprint will do. And while Ryno's (possibly short-lived) managerial stint with Philadelphia sort of takes the novelty out of cards picturing him on the Phillies, it's still a neat card.

And here's a Smoltz and a Mantle, dancing a bit. 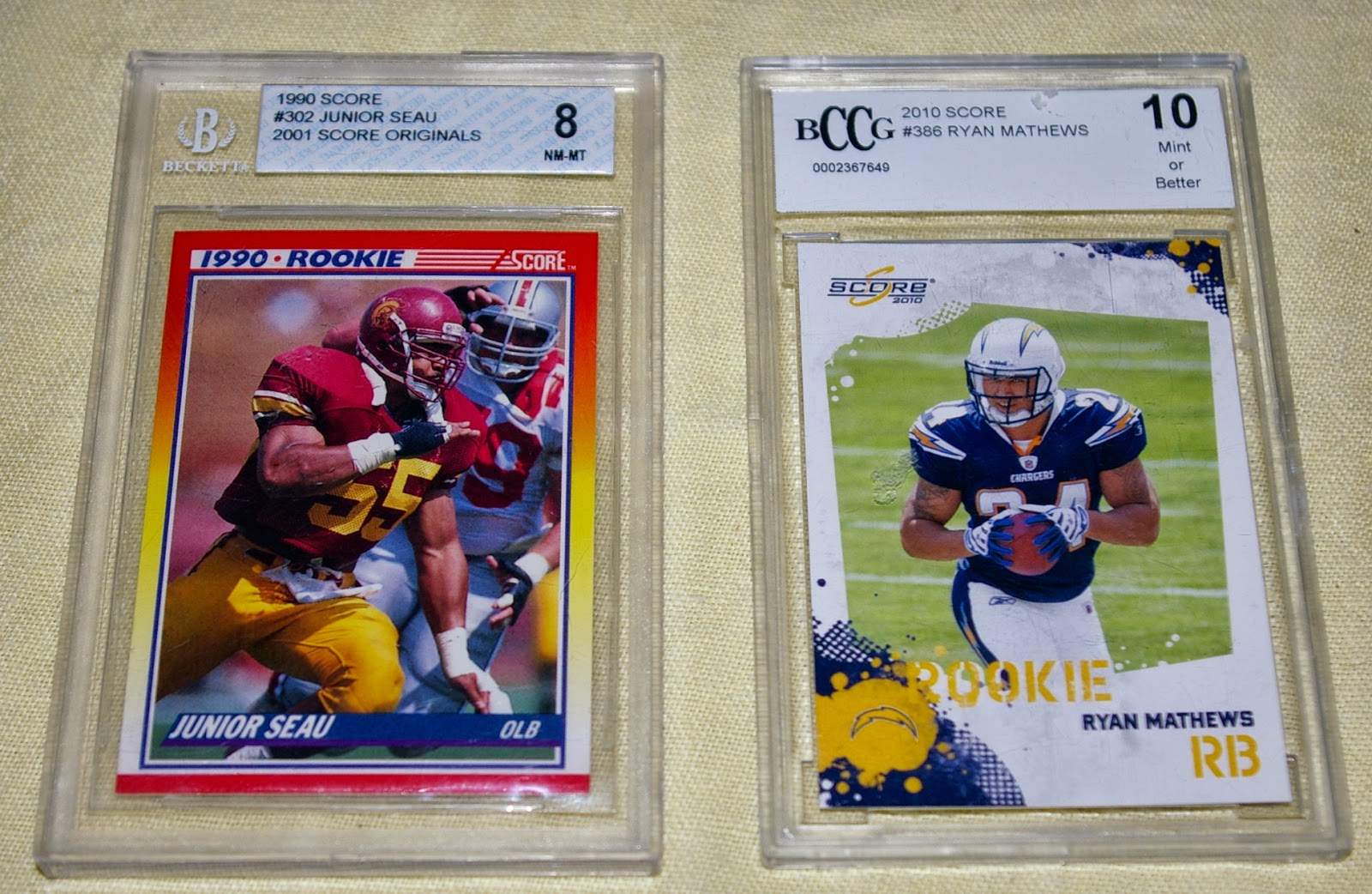 I don't spend much cardshow time looking at football cards nor graded cards, but slabbed cards for 50¢ is a rare sight (figuring it costs a few bucks just to get a card graded). So I checked out the few the dealer had available and plucked out a couple Chargers. R.I.P. Seau. As for Ryan Mathews, I heard he's no longer with San Diego, though I haven't paid all that much attention to the team since Tomlinson left, to be honest. But good luck to you, Ryan!


Thanks for the click. Still got some trade bait from the show to put up for grabs soon.
-Gav
Posted by defgav at 3:43 PM