I think it'd be a stretch calling me a Padres blogger. But sure, they're "my team" and while I'm a player collector who likes to collect guys regardless of team, a pretty good percentage of guys I collect have suited up for San Diego at some point.

For a while, it seemed like there were a bunch of card blogs run by Friar Faithful out there. Kinda bummed to see all the way to the backstop, Padrographs, and Bleedin' Brown and Gold all cut back to just a post or two since the season began. And maybe it's wearing off on me, because I had been in a good groove for a while there of posting pretty much everyday, and now I seem to be down to 2 or 3 posts in a week. LIKE A CHUMP!

But one card blog run by a Padres fan that's still going strong is The Underdog Collector. We swung a trade recently where he let me unload a Padres team set from '15 Heritage on him (I've got several thanks to that group break a while back).

I wasn't sure what to expect back-- some misc Padres, probably? But no, Underdog went outside the box and snuck a sweet lot of Chris Sale on me instead! 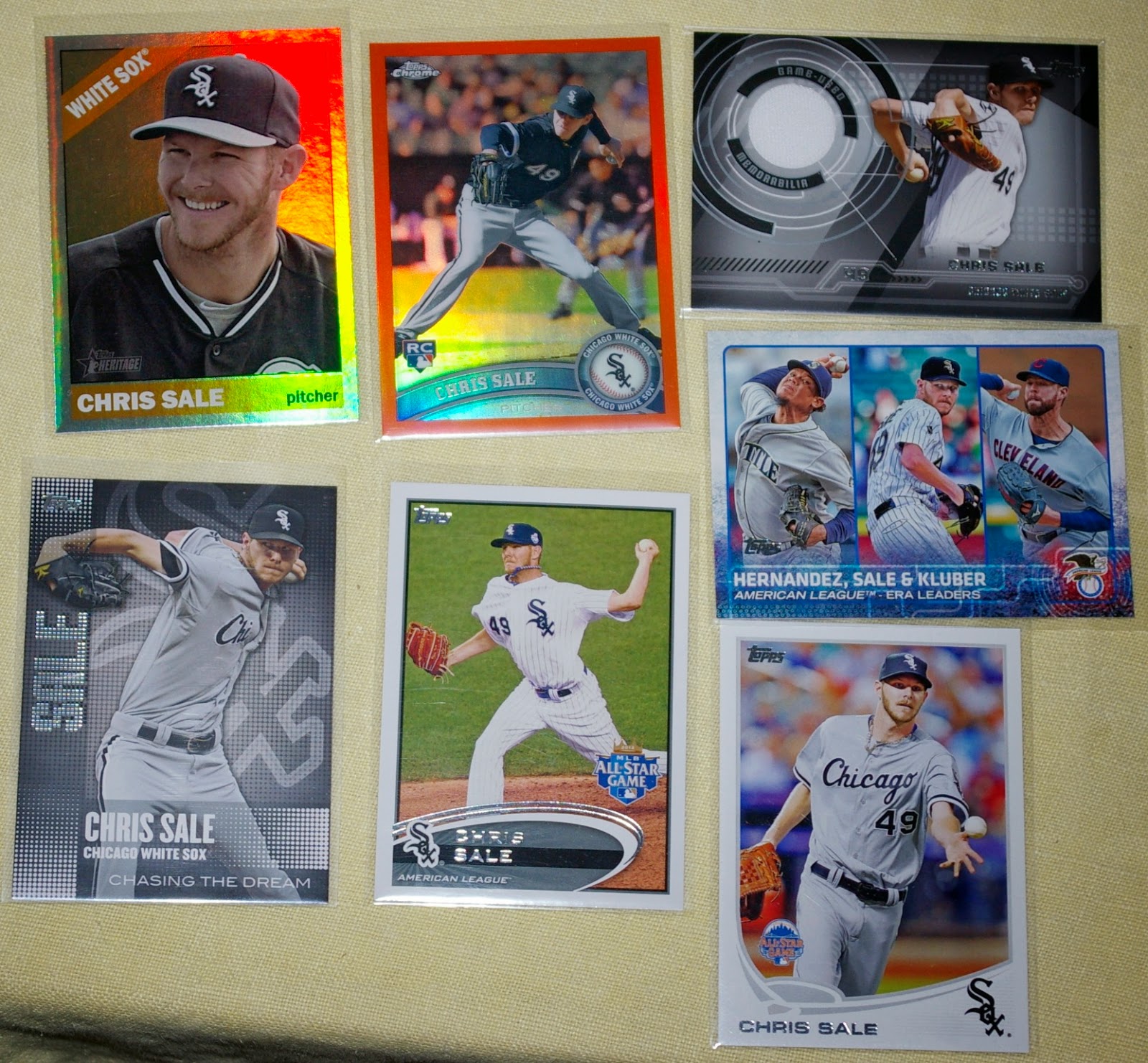 Very nice selection, including a couple slick refractor parallels and a tighty-whitey relic.

Sale is a guy I sort of fell into collecting thanks to pulling some decent cards. I eventually noticed he's a heck of a pitcher, and seems like a cool, bright guy. And so a PC was born. It's been fun building it up over the past year or so.

Thanks again for the trade, man!

While I've got you guys here, I'm going to go ahead and post my entire collection of Chris Sale cards. This is beneficial for me to do (getting organized, taking stock), plus I figure potential trade partners can use it to get an idea of my haves/needs. And of course, showing off cards is what we're all here for, right? 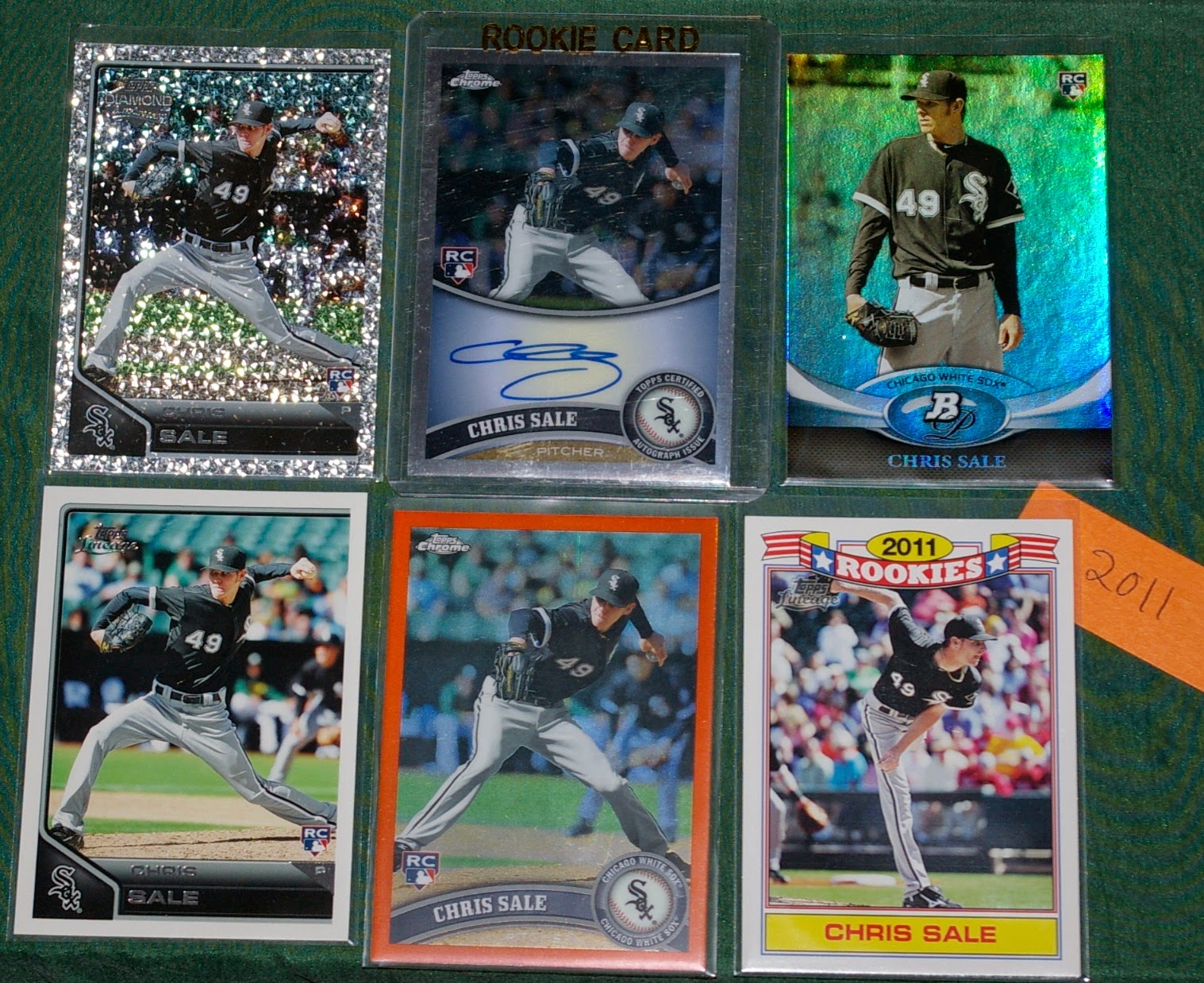 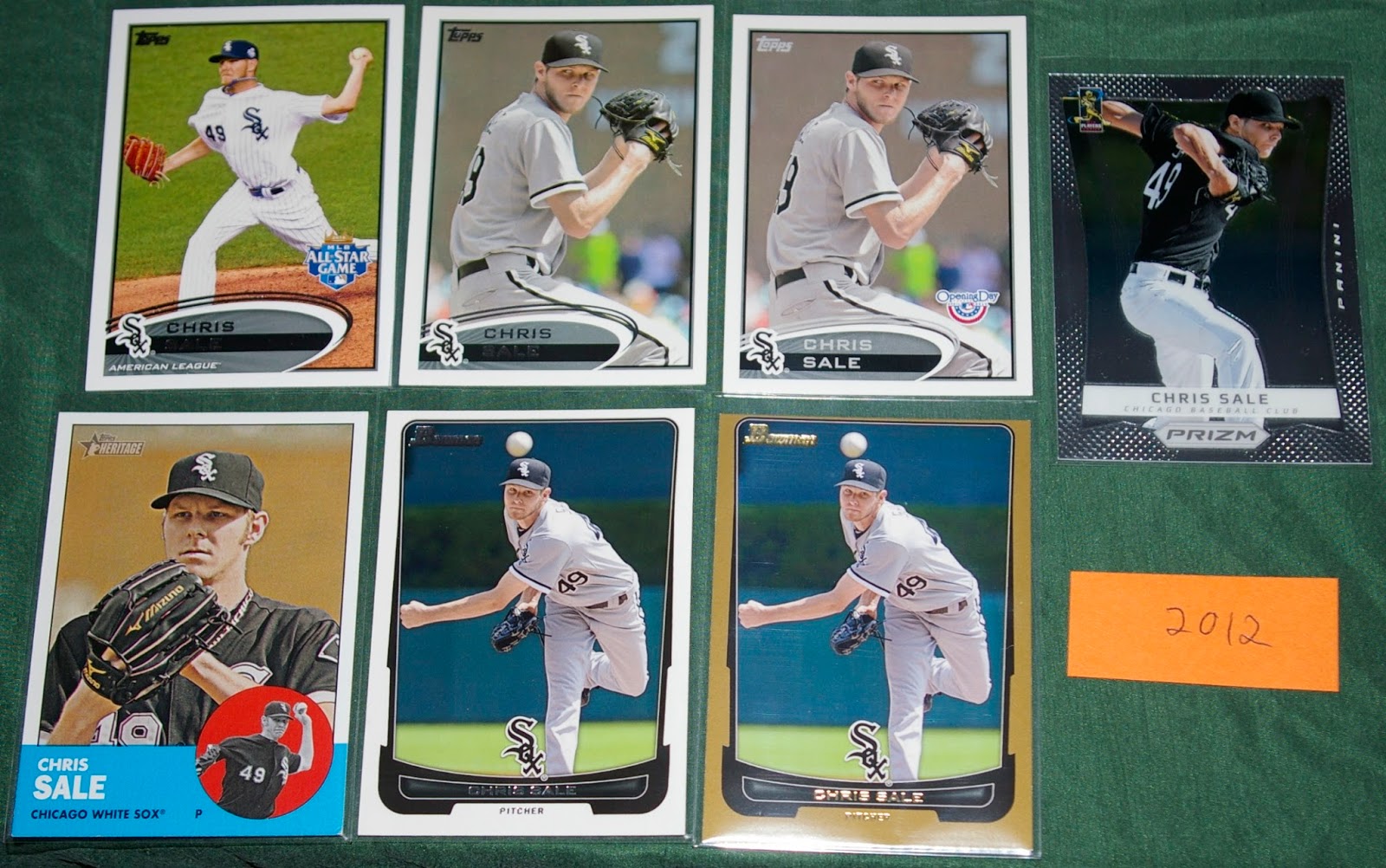 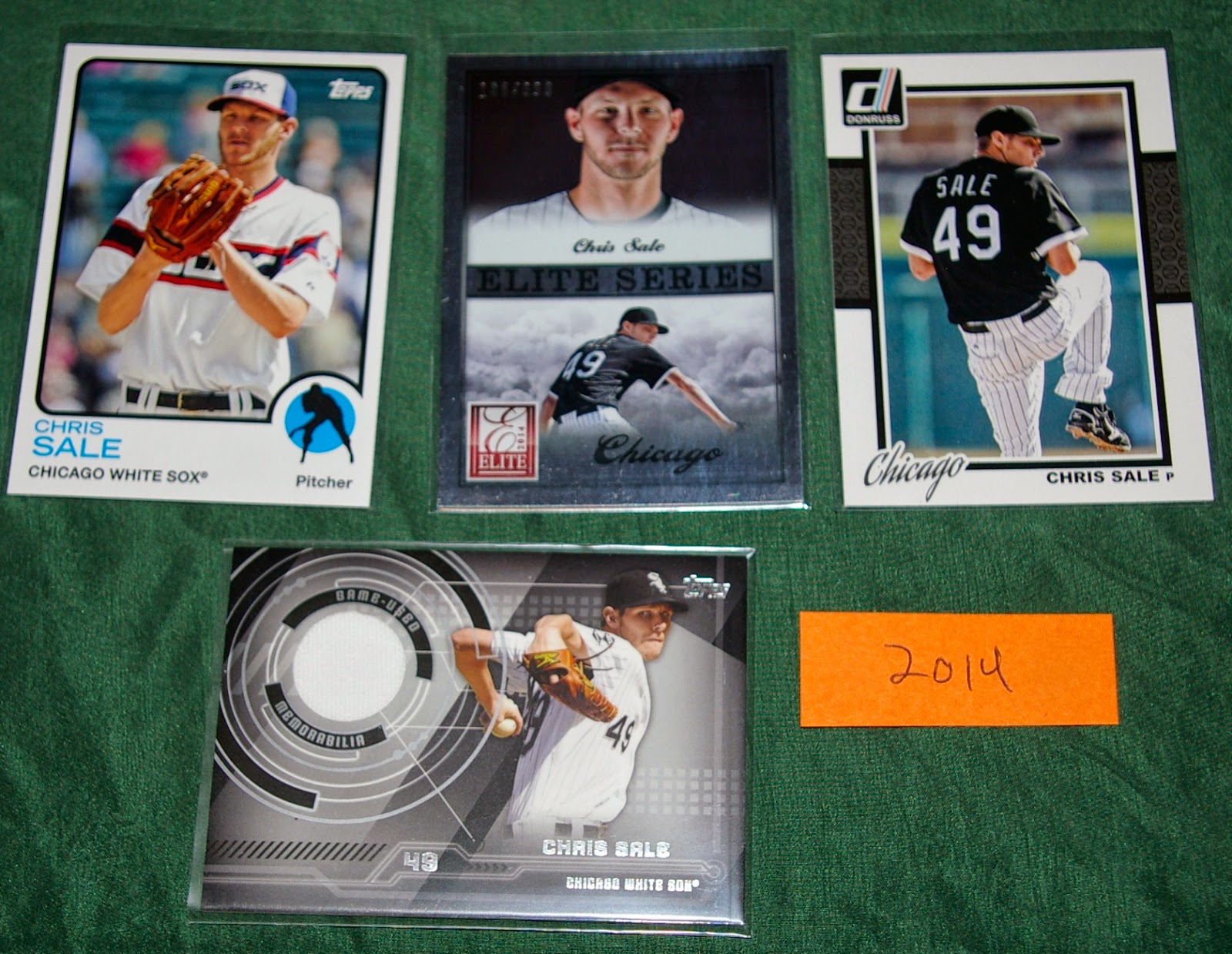 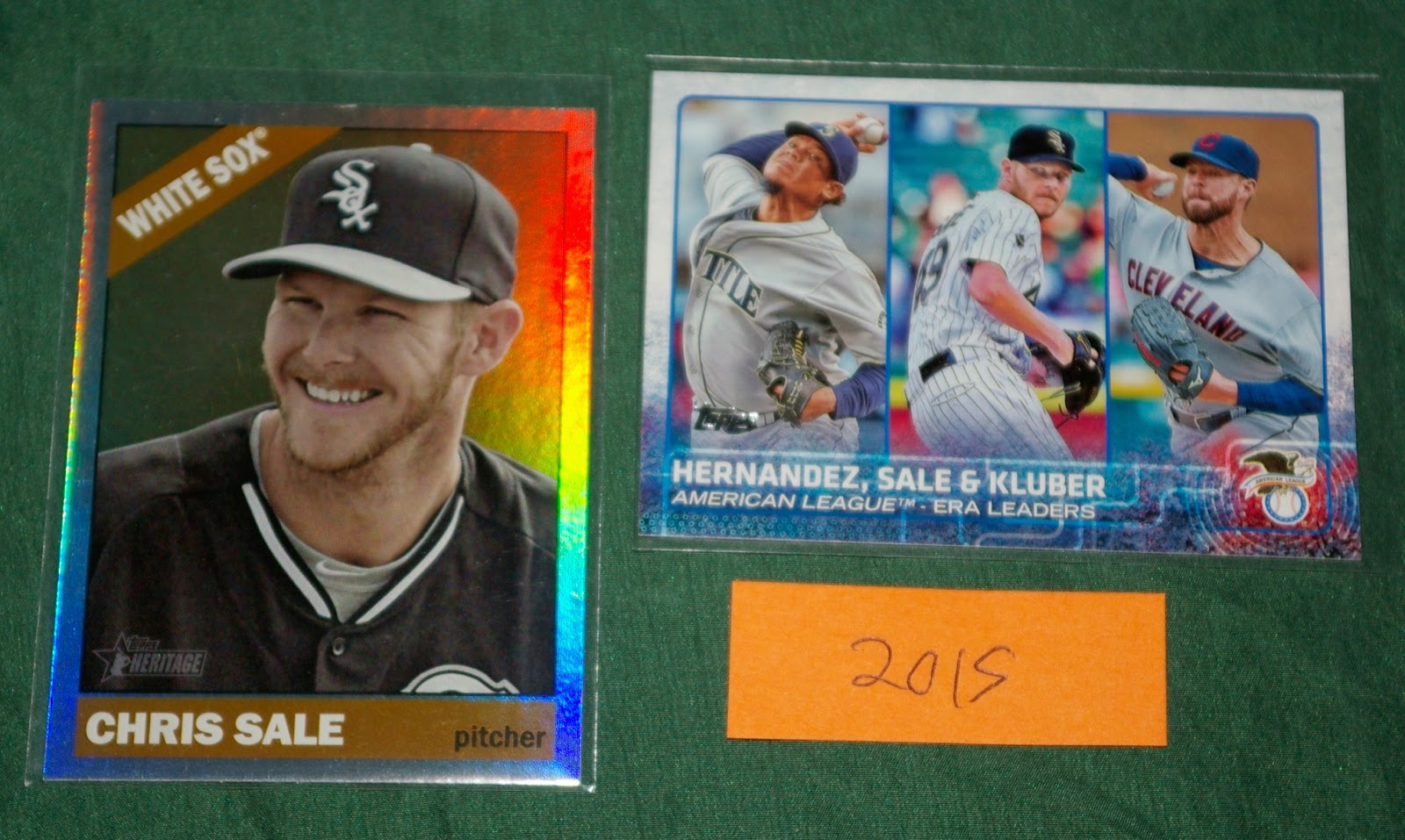 And there you have my Chris Sale PC as of 4/22/2015. Twenty-seven cards. Not bad considering the only card I actively brought into the collection was the auto, best I recall. Otherwise, these cards were all received in trades or pulled from packs. (I got the White Sox in a mixed-product group break a year or two ago which helped get me started.)

If you've got some Sale cards loitering in your tradebox not pictured above, please feel free to get in touch about a trade.