Stadium Club. It was a big deal during my initial collecting streak in the early 90s. I think I bought literally just a single pack of 1991 Stadium Club, and maybe a couple packs of 1992. (I was in awe of the product, but they were a bit too pricey for me to buy much of.) I got out of the hobby just before 1993's version hit shelves.

Most of the subsequent sets don't do anything for me, though I've still got some sentimental nostalgia for the first couple sets. After I got back into collecting as an adult, I bought complete sets of '91 and '92 Stadium Club on eBay. Unfortunately, the '91 set I ended up with had a weird damage thing going on with much of the cards (including just about all the key cards in the set), and I ended up getting a refund and eating the return shipping. Bummer. Maybe one of these days I'll try again, perhaps relying more on trades rather than just buying it complete. Anybody have a starter set they could donate to the cause?

Anyways, that rambling intro is mostly just to say that other than the first couple sets, I'm not really a Stadium Club guy. I was even indifferent to the 2014 reboot that most collectors loved (once the price dropped). Maybe it was because it just seemed like one of the mid 90s sets I wasn't around for, or perhaps it was the overuse of that photoshop effect that gives kind of a muddy look to the photos. (Why did the Topps designers go so nuts over that effect?! Ease off the throttle for the 2015 set, guys!)

But finding a random Roberto Alomar card in a dimebox recently gave me the revelation that there was a Chrome version of Stadium Club that came out one year and one year only, 2000. It was a really nice looking card in-hand, and I made a point to keep an eye out for a reasonably priced hobby box to bust, thinking it'd make for a fun rip.

That day has come! Strap in for a 2000 Topps Stadium Club Chrome box break.


Here's what I consider the Stadium Club theme song.. but you gotta change the word "love" to "club" in your head.

I'm not sure what it is, but something about borderless Chrome is just so (excuse the term) delicious. --literally, bringing to mind jelly beans and butter mints. Each pack is like an Easter basket! So I thought it'd be fitting to post this on Easter. I also took the highlights outside for a little "cards in odd places" photo shoot in a springtime scene on my front yard. (Also, these cards don't seem to scan or photograph well, so I thought some direct sunlight might help me get decent images of them.) No autos or relics, but the tough pulls are inserts and refractors. 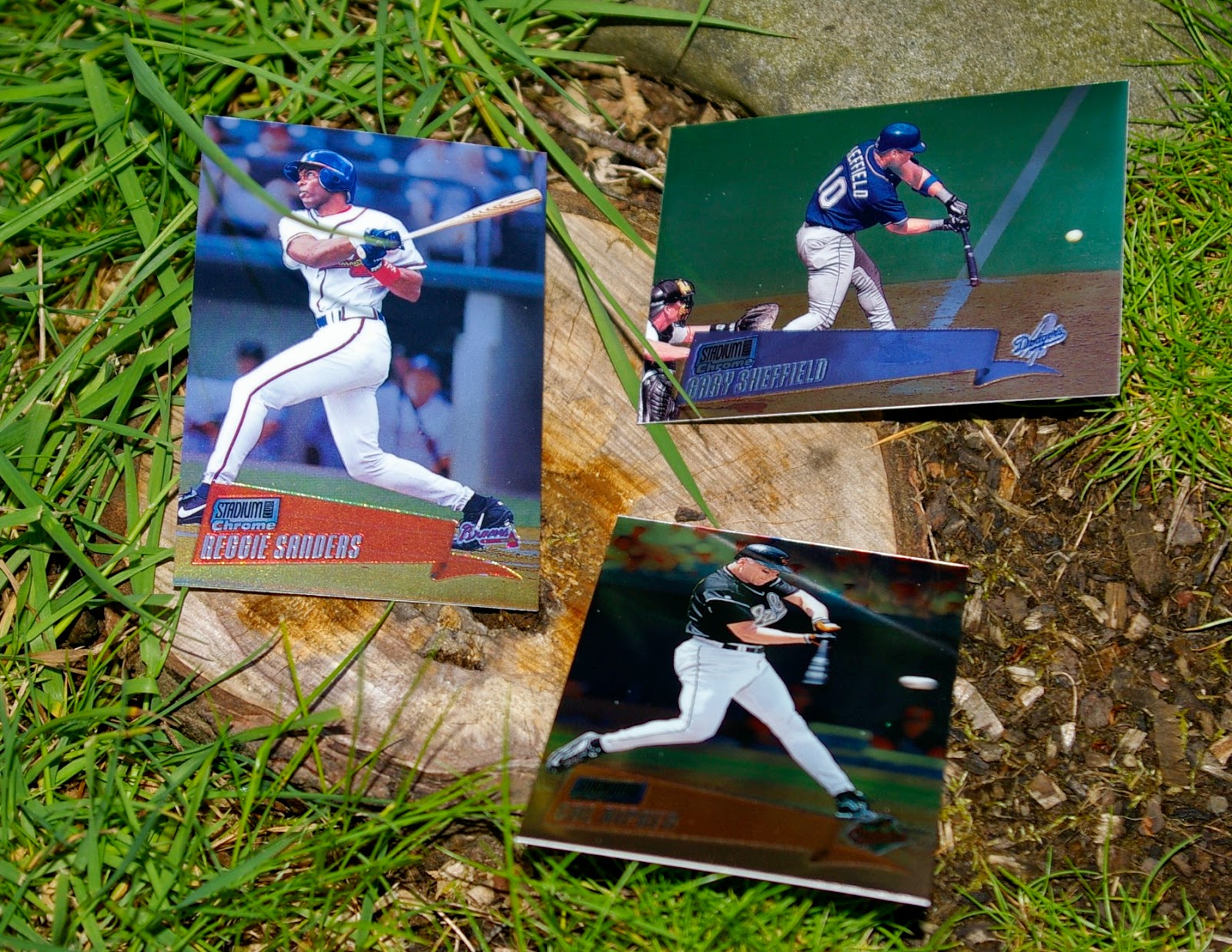 Some base cards. That's Ripken on the bottom. 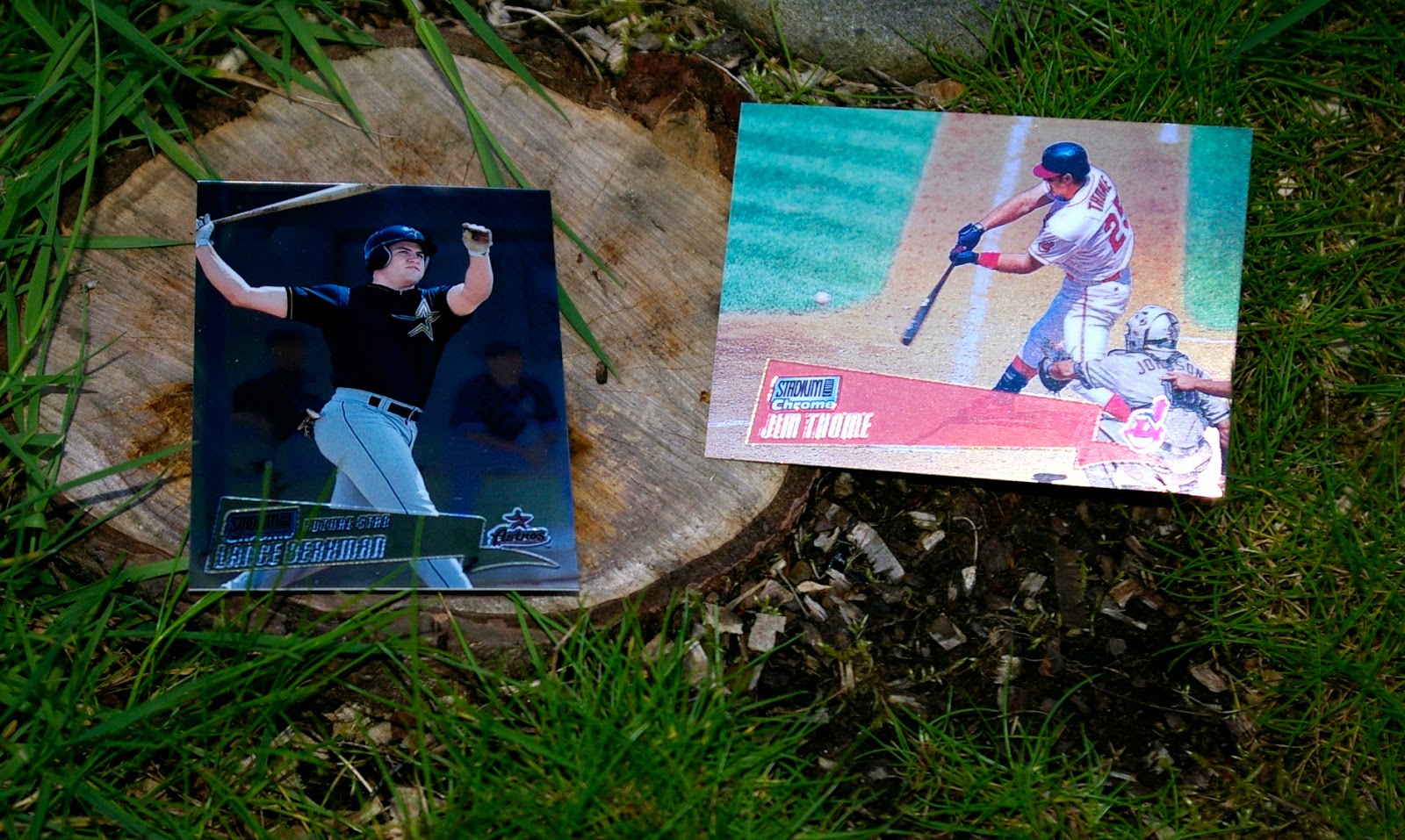 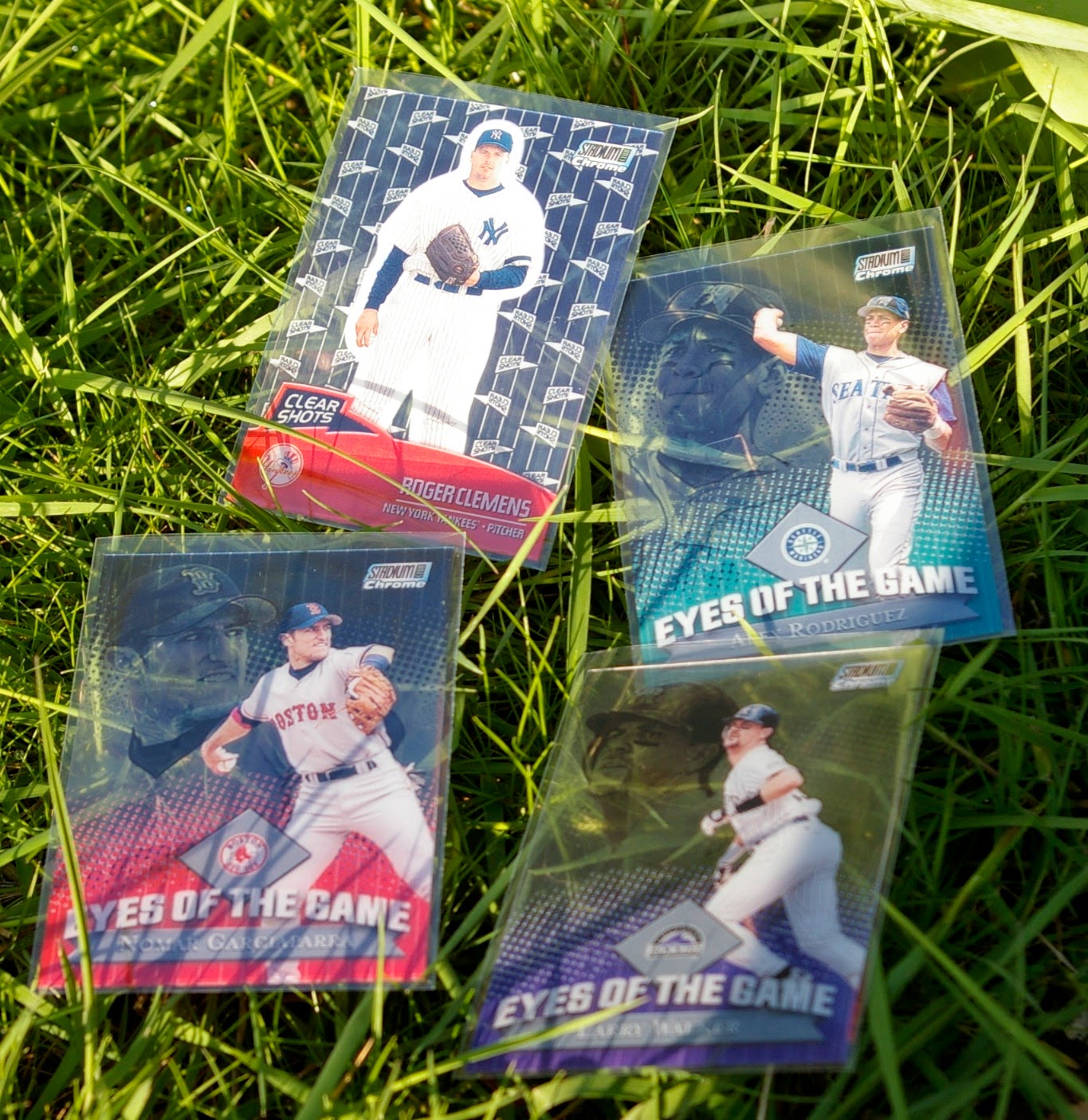 Here are the acetate inserts. (If the other cards are like jelly beans, then these are the jelly beans that you've sucked the outer coating off of.) Larry Walker is a PC guy for me. Nomar and A-rod will be tabbed for trading buddies. Clemens.. yeah, I don't know.. I'm tempted to start a little PC for him. He's a member of the Springfield Nine, after all. Not many people have appeared on both The Simpsons and Mythbusters, a couple of my favorite shows. So he gets some credit for that, even if he's a douche. 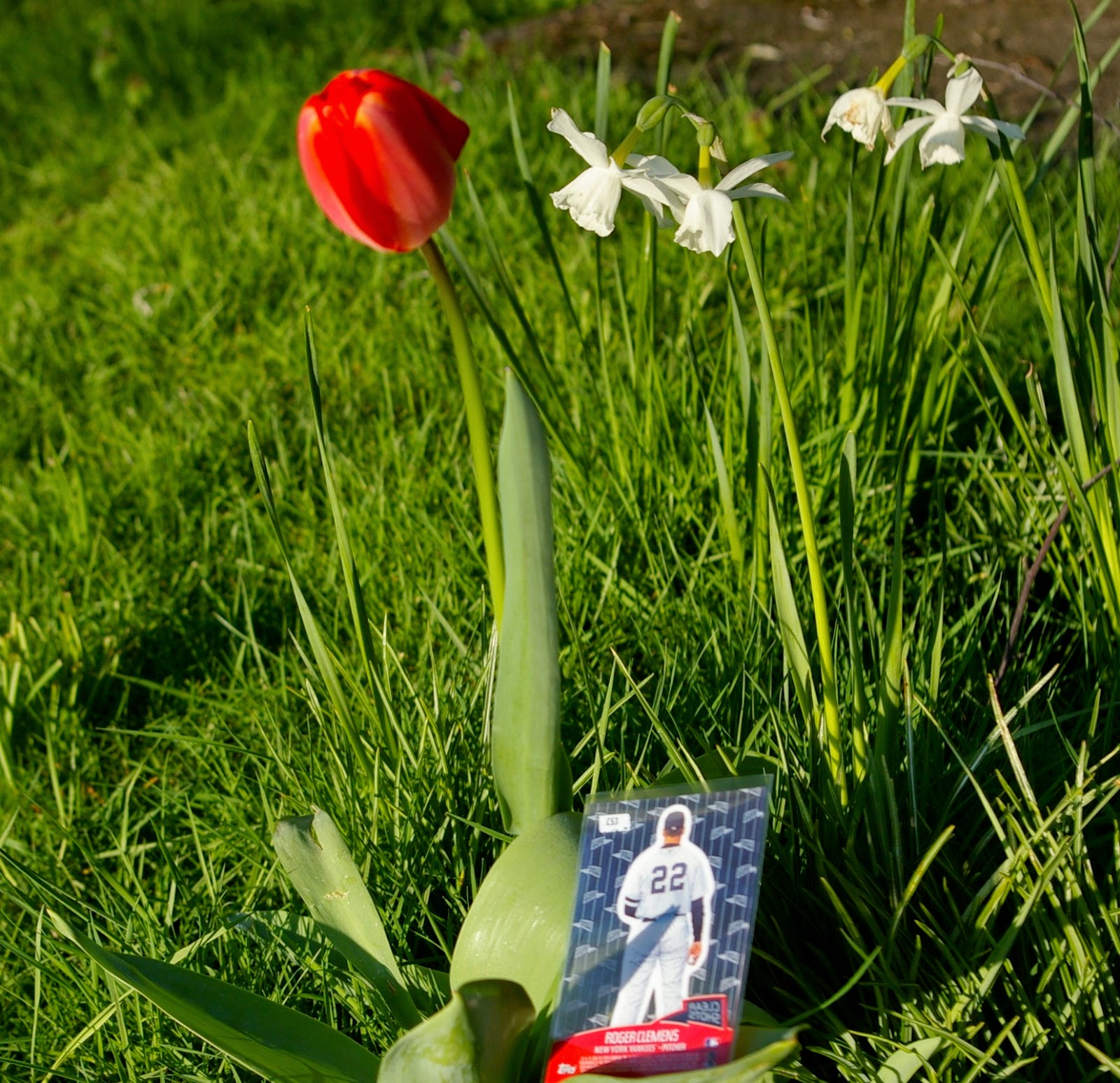 I thought the Clemens was interesting because instead of a reversed image on the back, as clear cards like this usually have, there's a picture of Roger's butt. 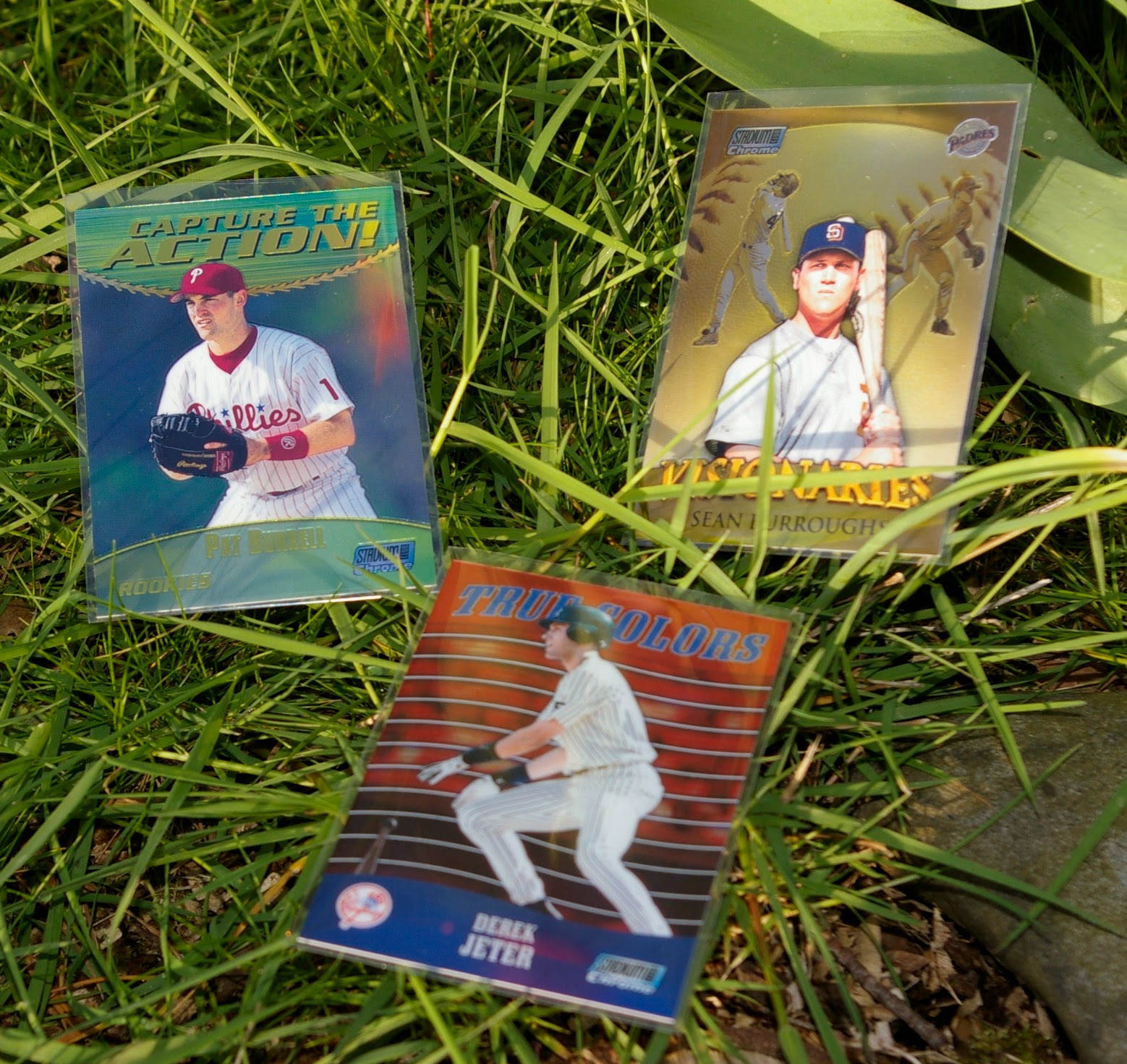 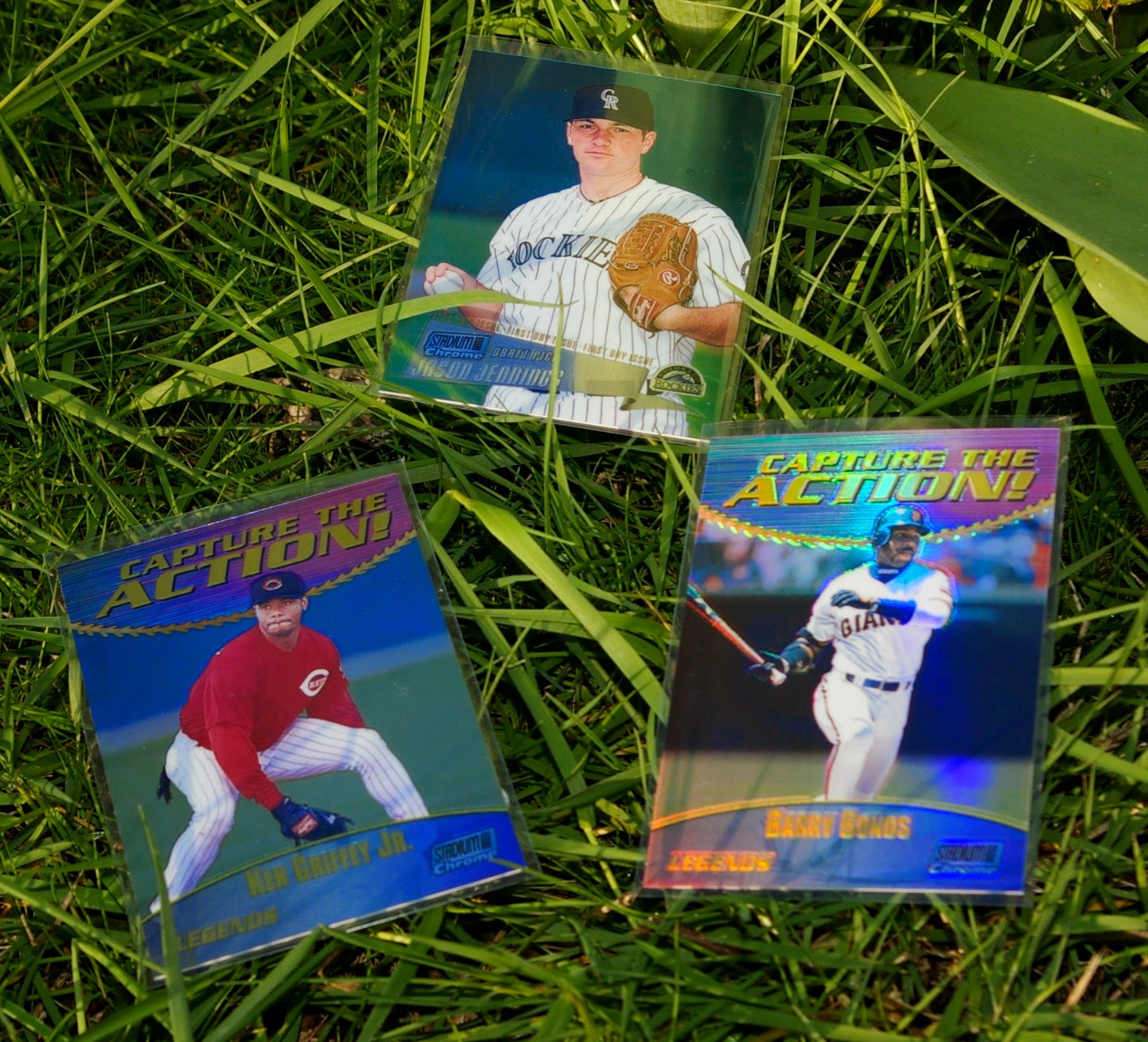 Jason Jennings "first day issue" parallel is the only #'d card I pulled. The Griffey insert is nice, but was a little damaged on the back right out of the package.. bummer. That Bonds refractor is the toughest pull I got, with Capture The Action refractors seeded 1:90 packs. Like Clemens, Bonds is a guy I've been considering starting a guilty pleasure PC for even though I'm conflicted about him. 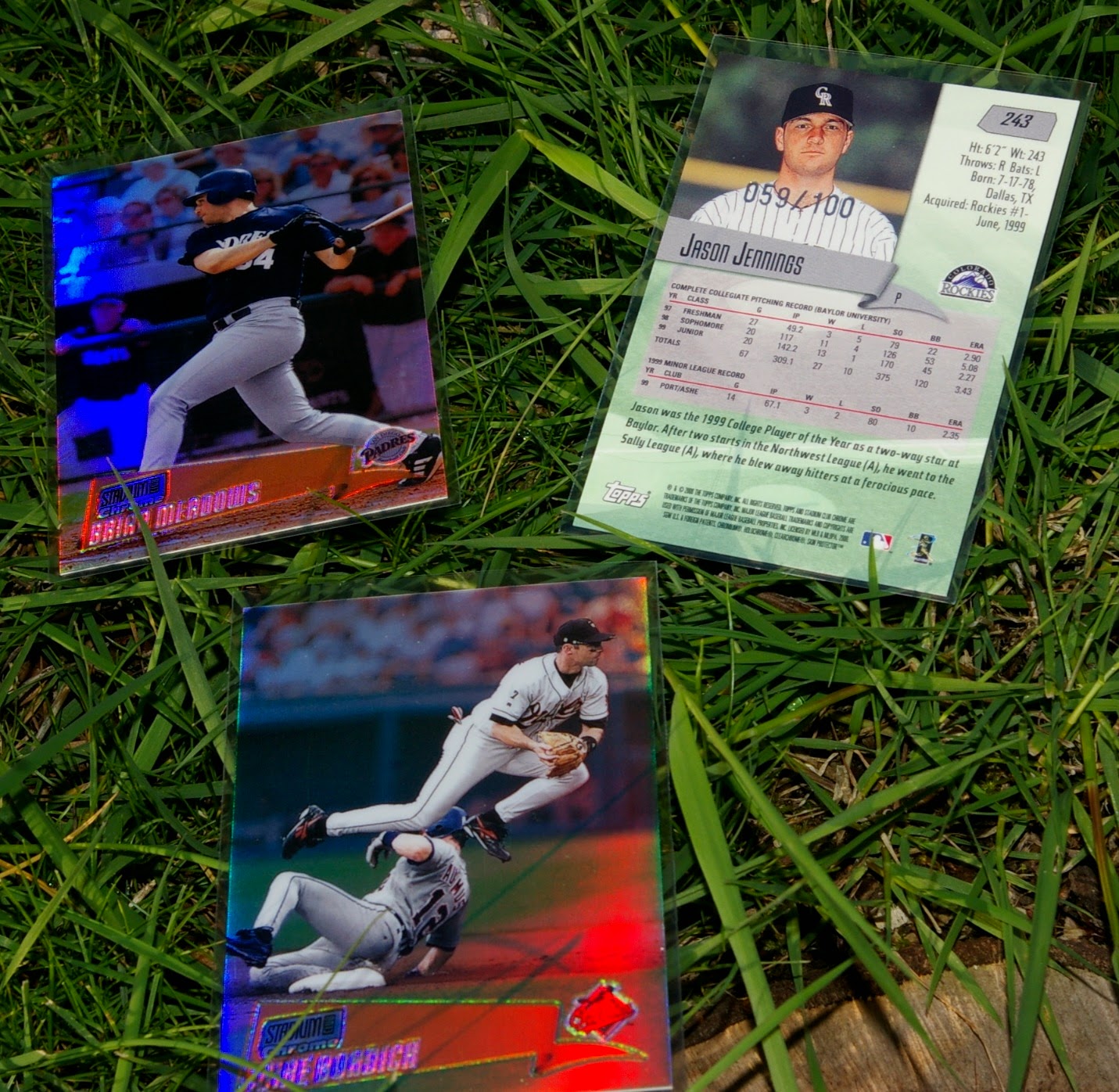 Here's the back of the Jennings, and the 2 other refractors I pulled.. not big names.. Brian Meadows and Mike Bordick (hey, he had a nice career, at least). And back to Jason Jennings, this draft pick card #'d 59/100 probably would have sold for a good price around 2002 when he won NL ROY, but doubt there's much demand for his cards these days. 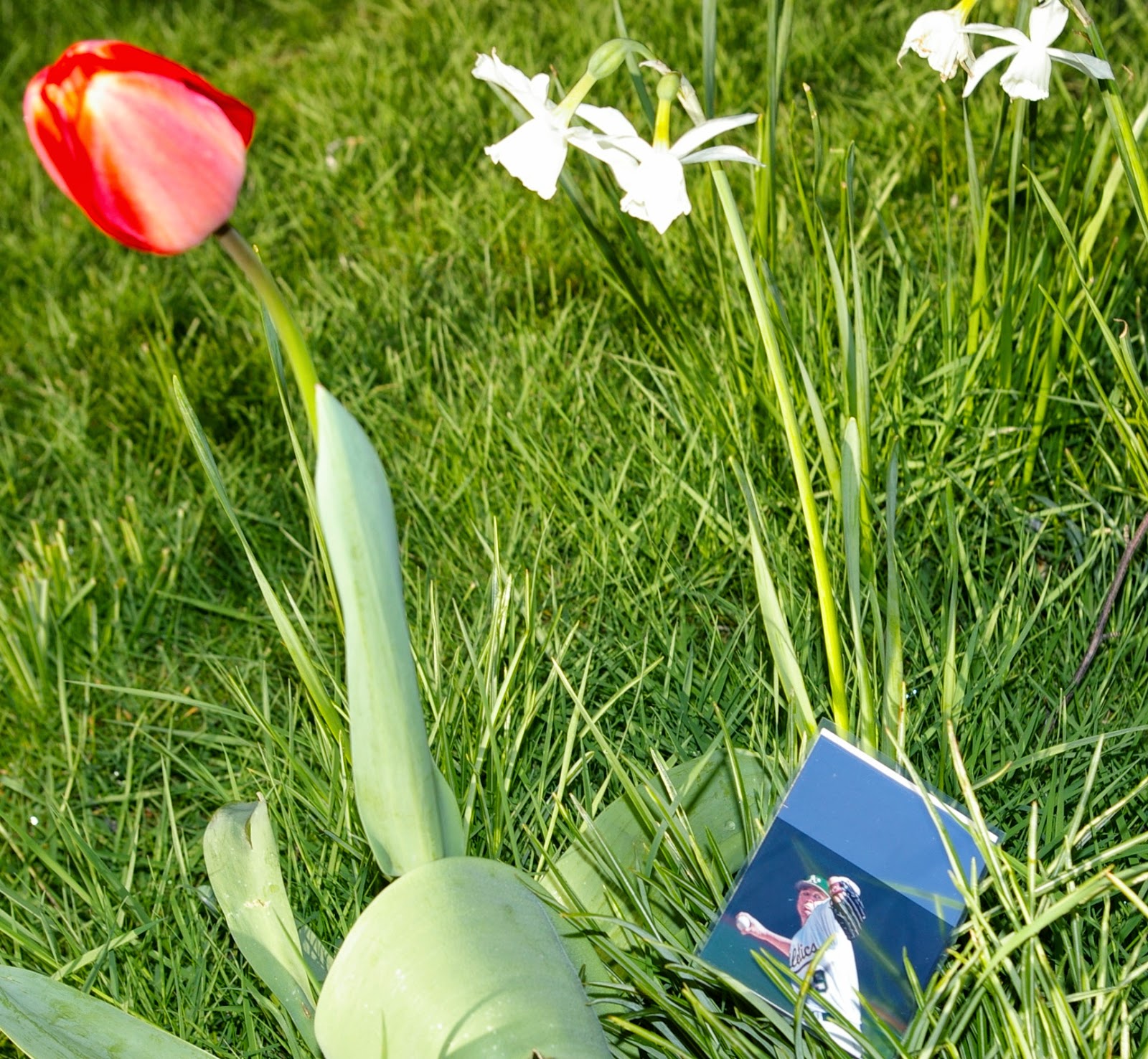 Here's the most interesting card I pulled! A bizarre miscut. It's an A's pitcher, with the top third of the card being "blank" shiny silver. 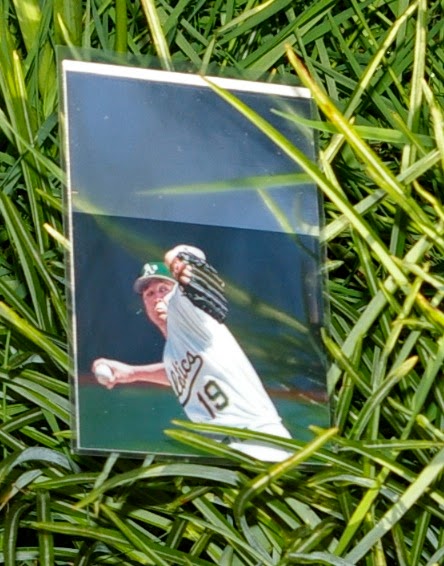 Here's a closer look at it. I couldn't identify the player straight away, but some quick research reveals it's former Royals ace Kevin Appier. This would be a cool card to get signed; an autograph up in the silver part would really pop. 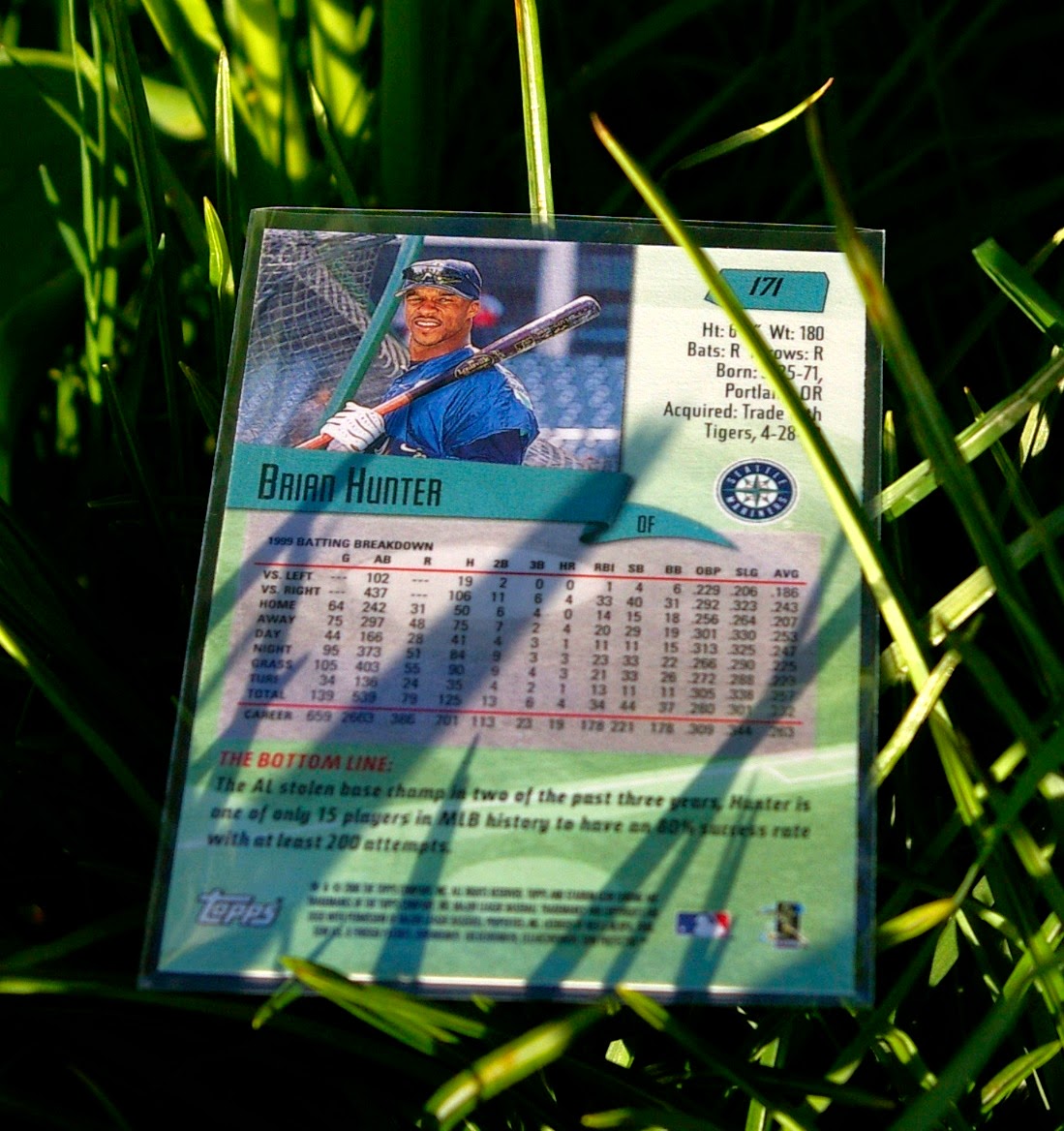 This is the back of the Appier miscut.. it's Brian Hunter hiding out on the reverse. 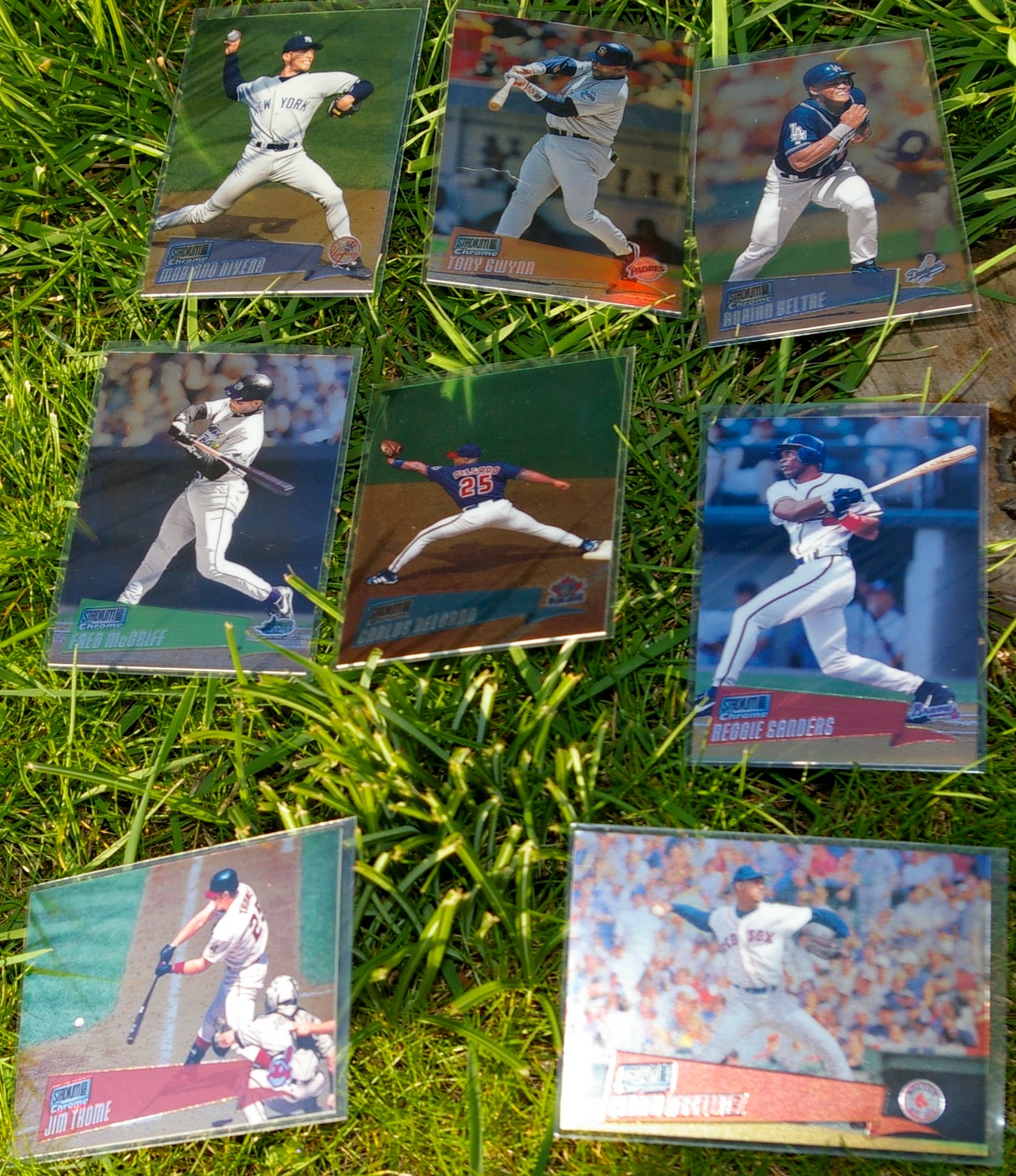 Here are some more cards. (Oops, sorry to feature the same Sanders and Thome cards twice in this post.) 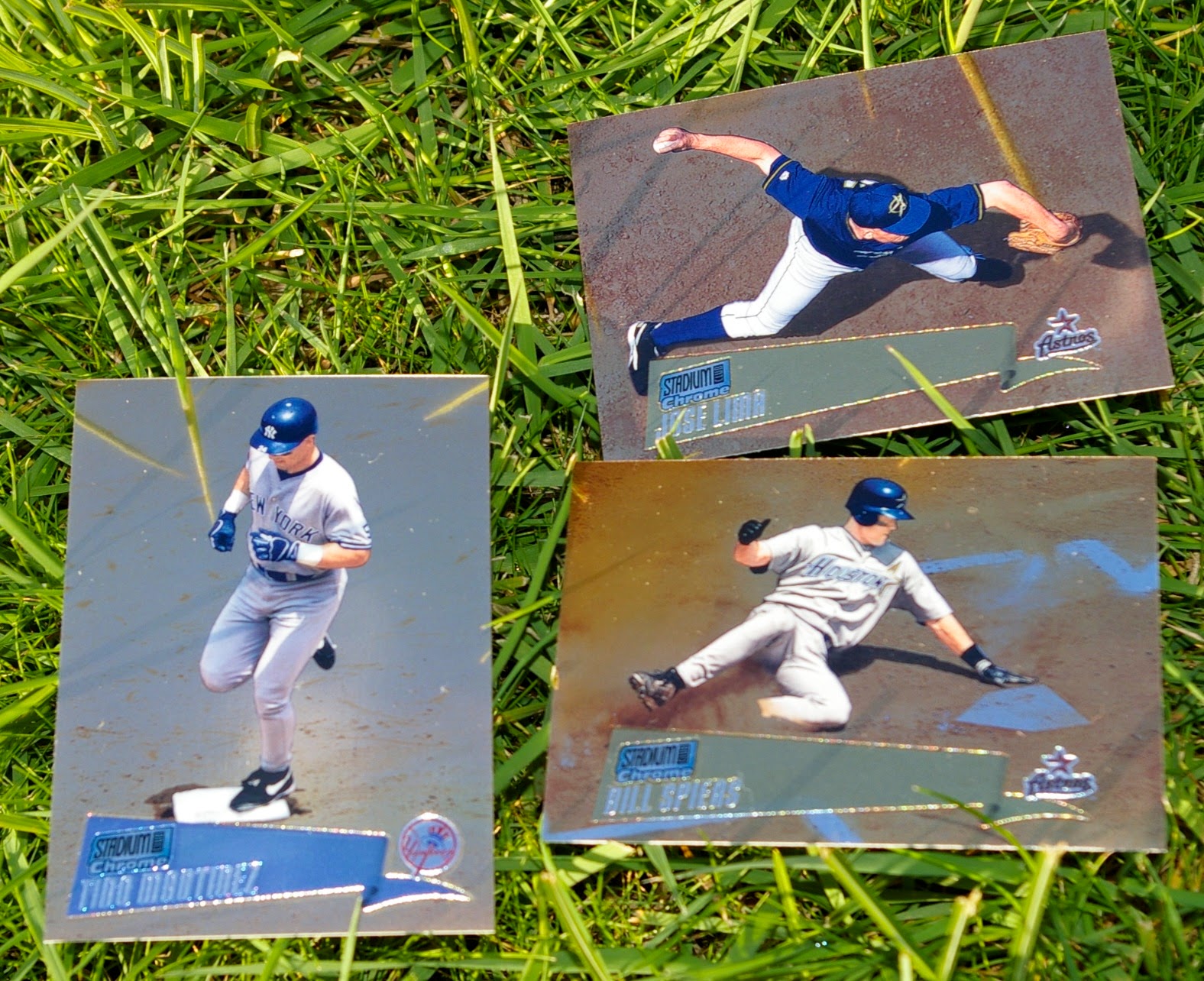 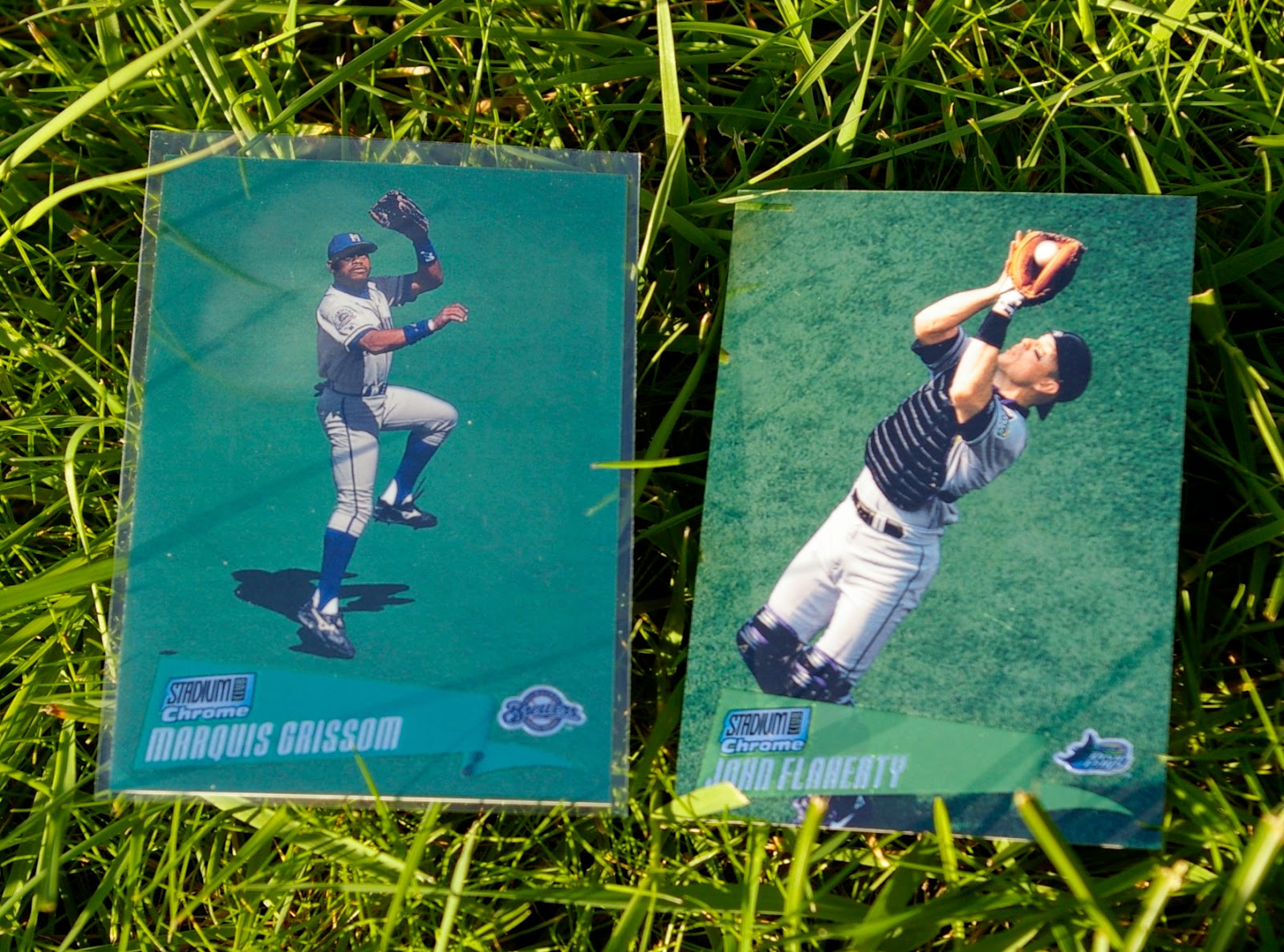 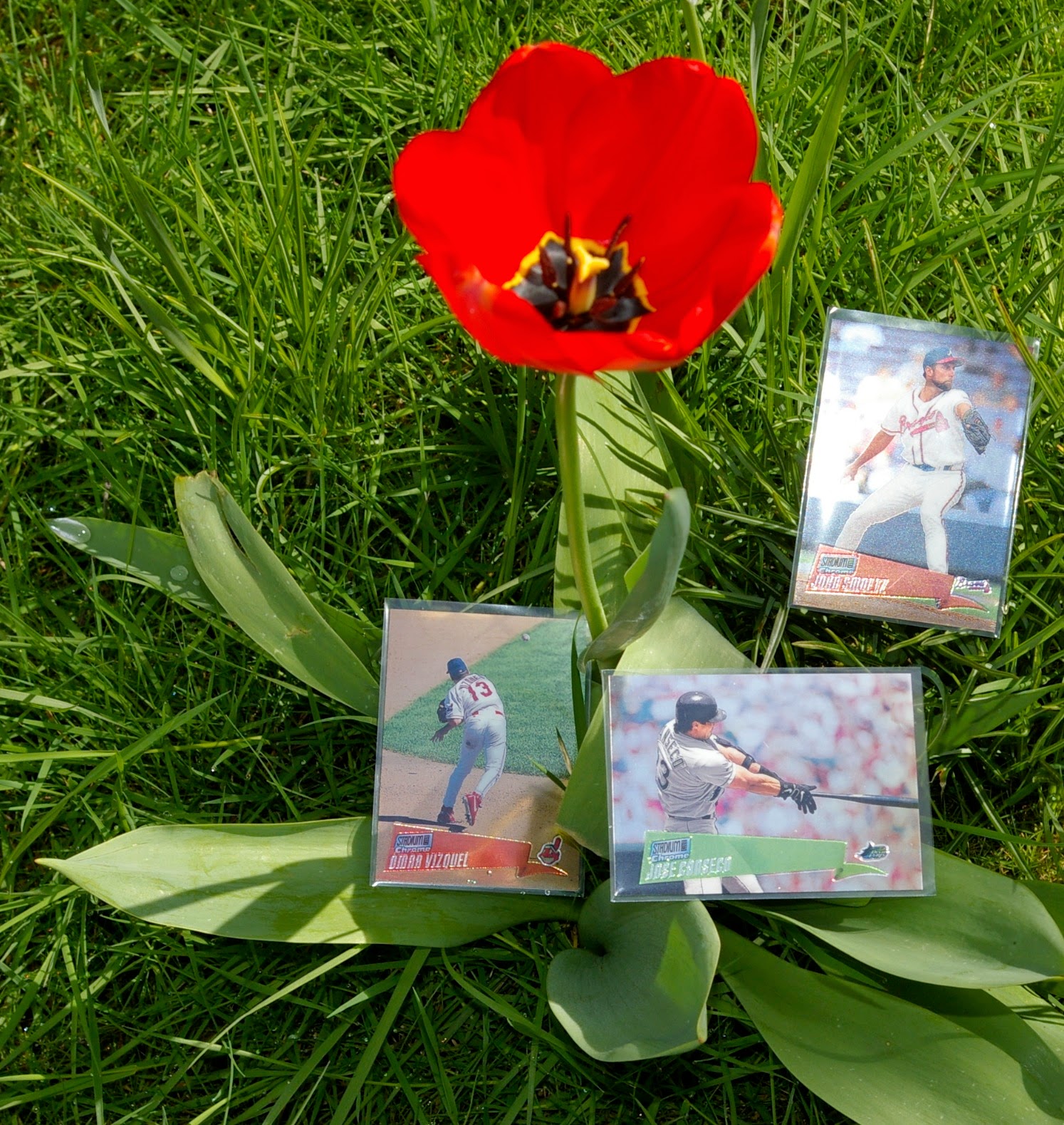 So there you go: highlights from a box of 2000 Stadium Club Chrome. I'm not planning on building the set.. just nabbing some guys I collect and a few other neat cards that caught my eye, so I've got many cards available to trade.

Happy Easter, guys!
Posted by defgav at 8:47 AM