Another Netflix-inspired pickup (or two)

We watch a lot of Netflix at my house. My wife doesn't care much for documentaries, especially sports documentaries, so those are usually left for solo watching. I guess I'm suggestible in this solitary state, and often hit eBay while I'm watching and see if I can find a reasonably priced certified auto of the featured athlete(s).

Let's see, there was the two kids from Hoop Dreams a few months ago.

And after watching the Battered Bastards of Baseball, I picked up a Jim Bouton auto.

And most recently, I checked out No No: A Dockumentary about Dock Ellis. Very entertaining, highly recommended.

And yep, I set out searching for an auto. I was hoping for a nice shot of him in a Pirates uniform, since the best part of his career was with Pittsburgh. Unfortunately, it seems he's only got two readily available certified autos on the market, and both are from Yankee-centric sets put out by Upper Deck in 2003 and 2004. (Deja vu, as Jerry Coleman's two main certified autos are from the same sets. And like Dock, use the same photo both years. I got the Jerry from the same set (2004); I think it's a nicer design than the 2003 set.) 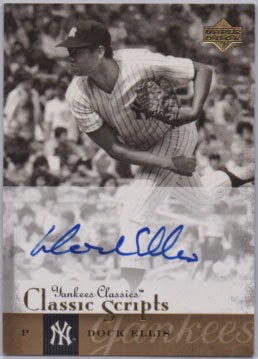 Photo selection complaints aside, it's a pretty cool card, and a nice "memento" from that enjoyable film. I gotta admit I wasn't all that familiar with Dock, but now I might need to start a little PC.

Another Netflix-inspired mini-PC of mine is Buck O'Neil. I already had his 1962-style Fan Favorites auto among that tiny collection of cards, and I recently added another Buck auto... 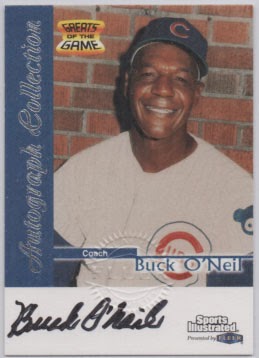 It's impossible to watch any of Ken Burns' Baseball and not fall in love (manly speaking) with Buck O'Neil. It's streaming on Netflix, and while I've already watched through the whole thing a year or two ago, I'll still sometimes re-watch a bit of it if nothing else in my queue grabs me.

Buck O'Neil only has maybe a dozen different cards out there, so it's not a tough PC to "finish" assuming you don't worry about obscure oddballs and various modern cut-autos and the like. And this auto, featuring a happy photo from his days as a coach with the Cubs, is a great addition to my budding Buck PC.

Thanks for stopping by.
Posted by defgav at 10:57 AM