The joy of a completed PC: Mike Piazza

(The first part of this post was drafted about a month ago.)

Thanks to a hefty lot in a recent package from Daniel at It's Like Having My Own Card Shop, I've obtained my 100th Mike Piazza card, thereby knocking him off my wantlist. Hooray! 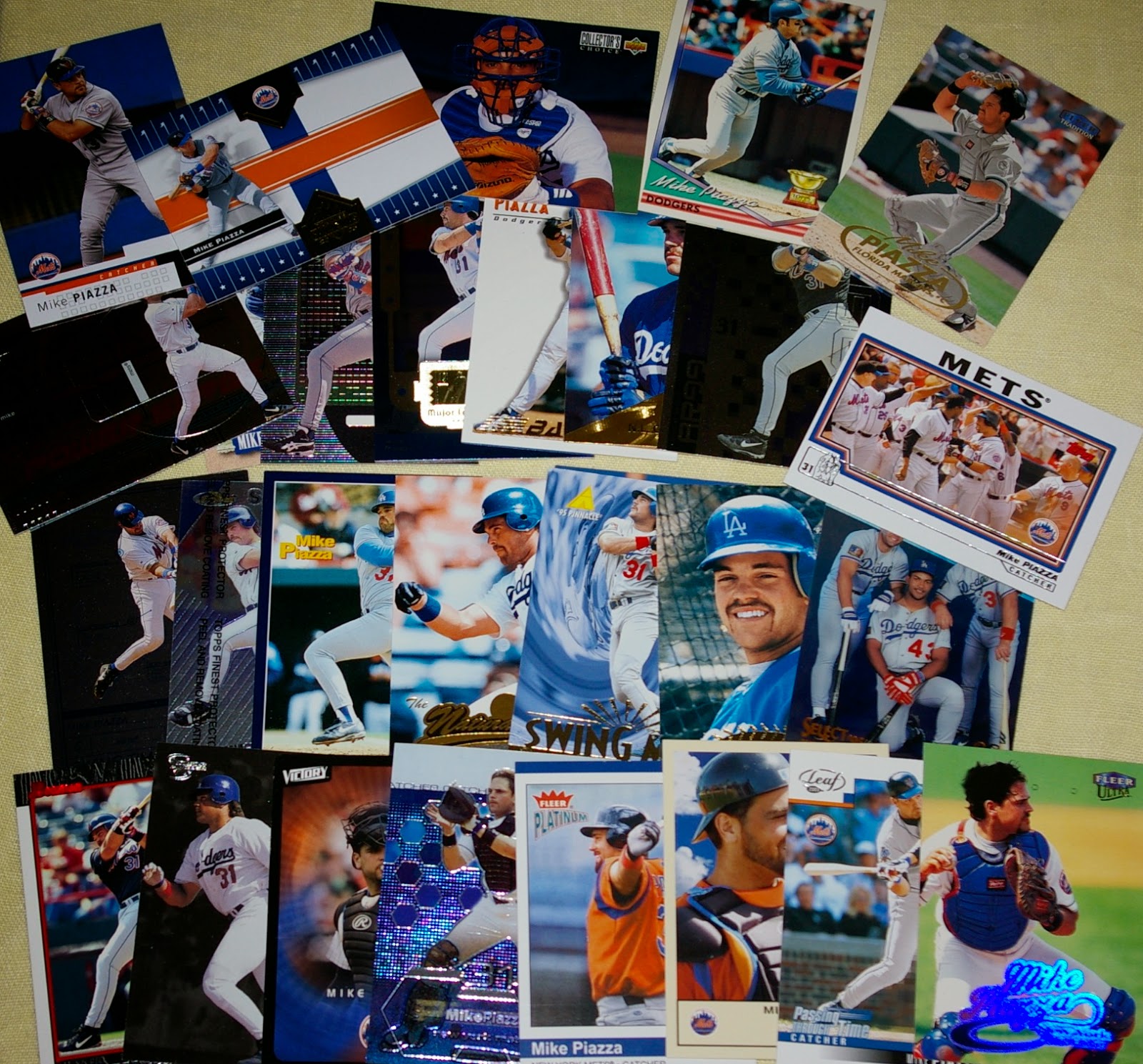 Mike Piazza might have more baseball cards out there than anybody, save maybe Griffey. I always thought he was just fine (not a super fan, but didn't dislike the guy), and thought it was surreal in 2006 when he played for my hometown Padres for a one-year stint near the end of his run. Though voters are "sending a message" by making him wait a while, smart money is on Piazza being inducted into the Hall within the next few years. He's got to be included on any shortlist of baseball's all-time catchers, right up there with Bench and Berra.

And as a probable to-be member of my Pads in the Hall minicollection (any former Padre inducted into the Hall of Fame), he's a main guy I collect. But now thanks to my adopted 100-and-done method of player-collecting, I can stick a fork in this PC. Right?
Well, almost.

Unfortunately for me, I can't celebrate too hard just yet because I sort of have an unwritten rule that a guy in my Hundred Card Club can't officially be considered a "finished" PC without a certified auto to crown the collection. (This rule will really become an issue once Clemente and Mantle crack triple digits.) Piazza pack-certified autos are tough to come by and have thus far eluded me. (Well, hey, I do have an auto of his cousin who's also named Mike Piazza, if that counts for anything!)

But I'll keep a lookout, and hopefully make that happen one of these days.

For now, let's take a look at my Mike Piazza collection.

UPDATE: Ok, like I said, I originally drafted that up like a month ago. I assumed I had 100+ Piazzas, but turns out I fell short and was just at 87 cards. D'oh! So this post had to wait a while till I really got 100 different cards of the guy. The nickelbox I showed highlights from the other day thankfully came through and helped me achieve the goal.

So here are 100 Mike Piazza cards! 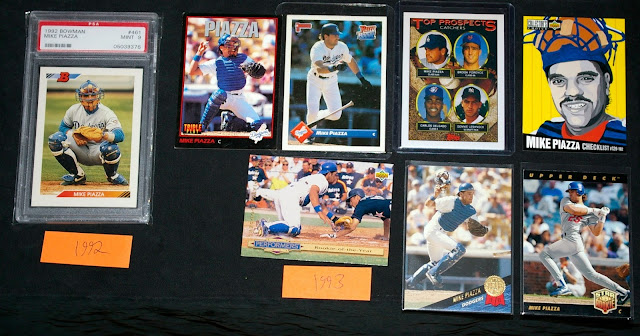 Rookie cards! The graded '92 Bowman was a sweet prize from Bob Walk the Plank last year. 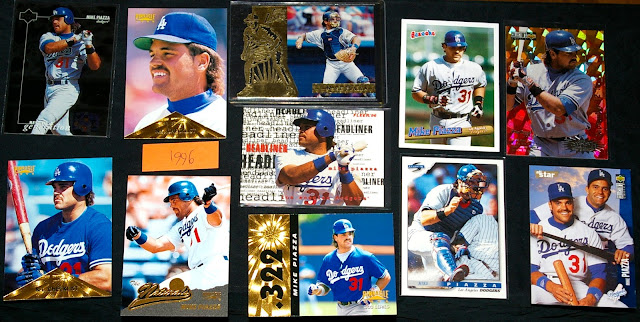 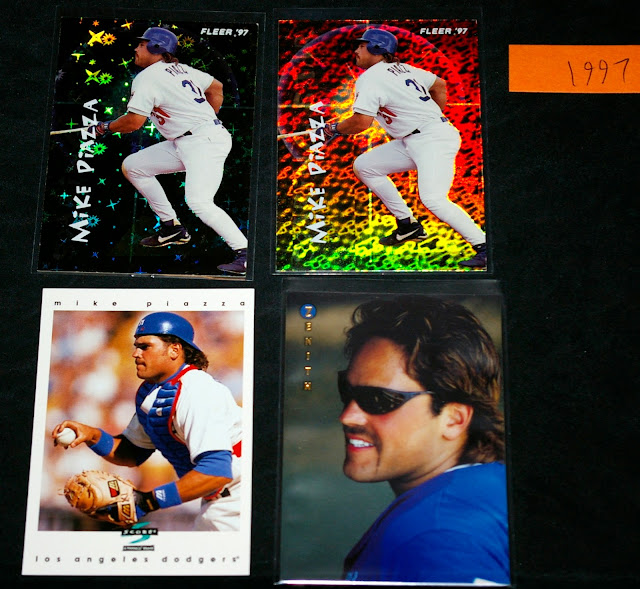 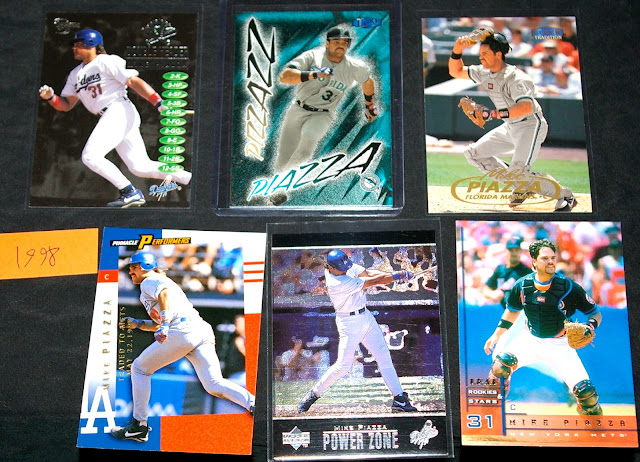 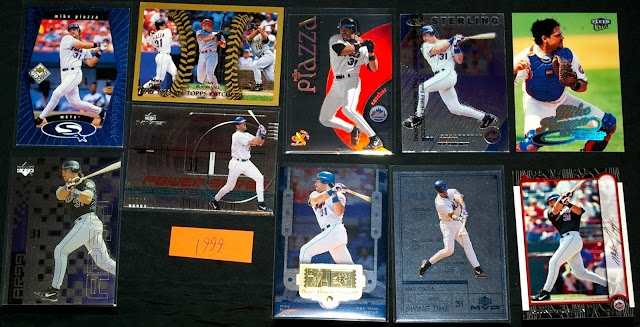 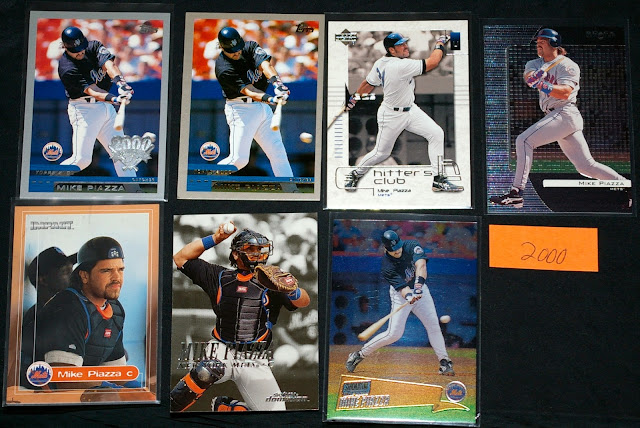 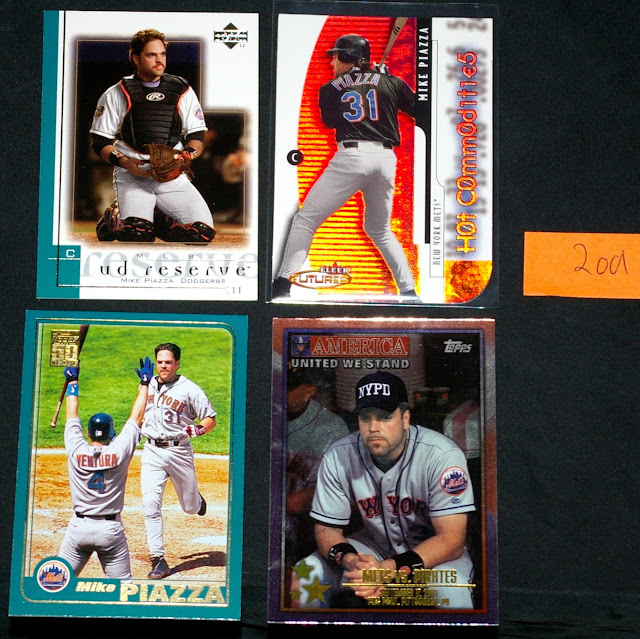 Happy Memorial Day, by the way. Thank you to the heroes.

Ok, the 2 cards on the right are technically the same card, but the tint is different enough to where I guess I'll consider one an unofficial variation rather than a dupe. 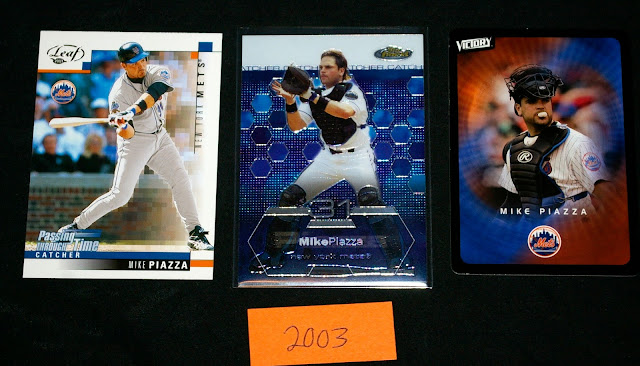 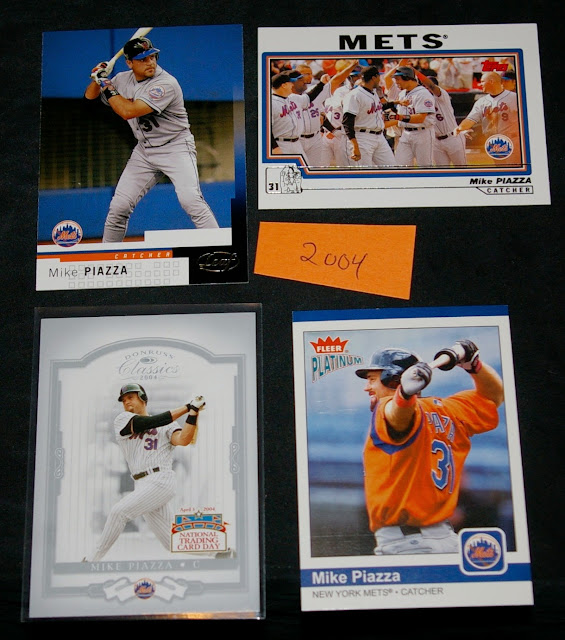 I love the 2004 Topps design (see my love for 2004 Topps Retired) and the little sketch-thing in the corner is a cool concept, but it doesn't really work with every picture.. and this is a prime example of a fail. Closer look: 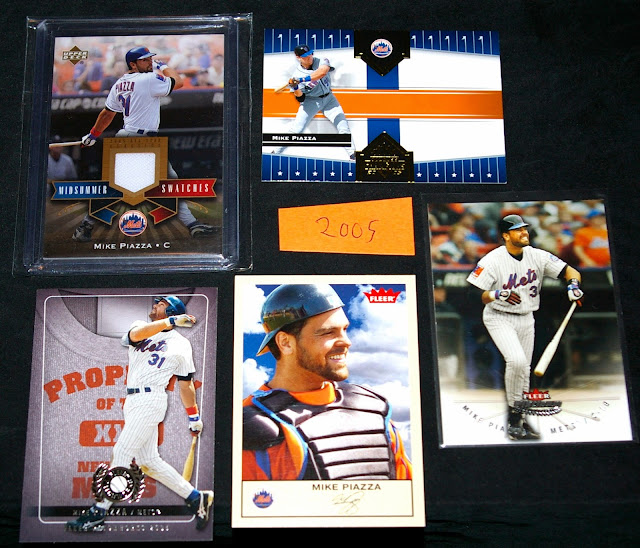 2005 features a cool Piazza relic. It came from Nate at Big 44 in a trade last year. 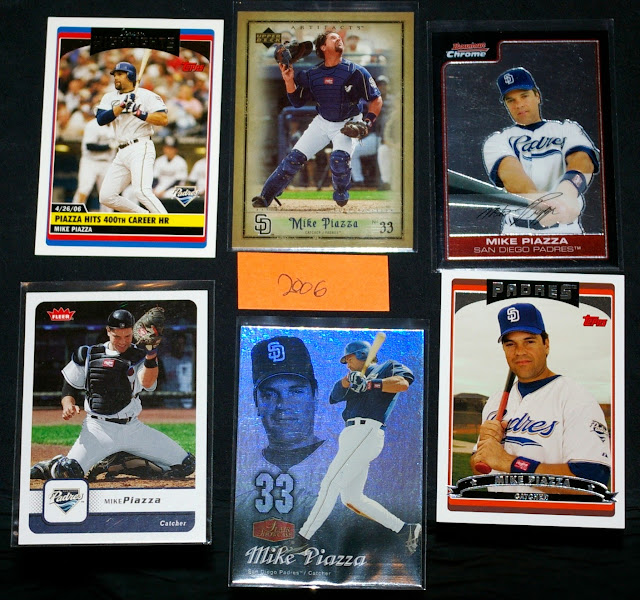 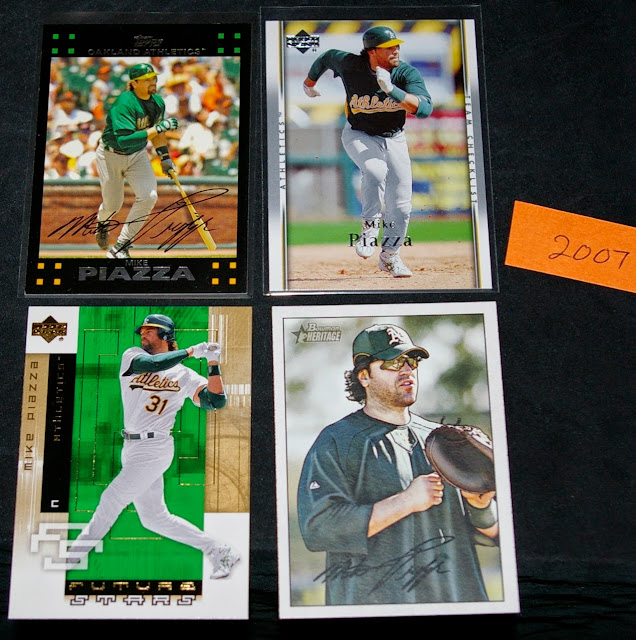 Piazza just doesn't look right in the white n' green. But neat, in a weird way.

Getting to the end now. Let's flip these 4 over: 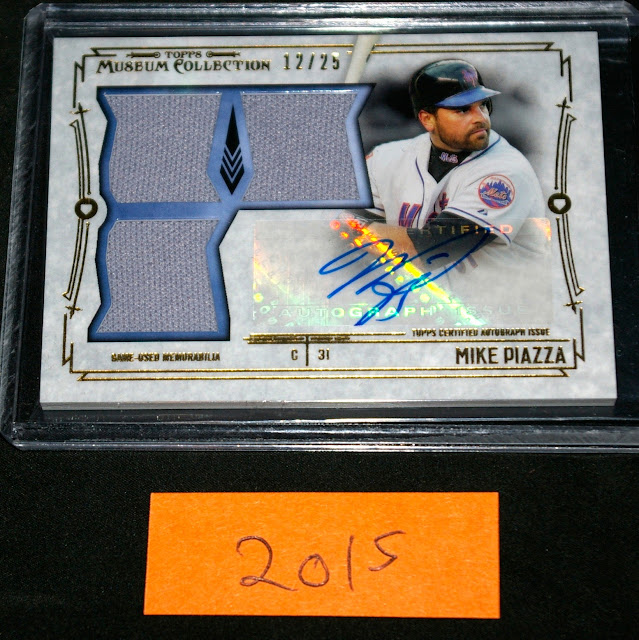 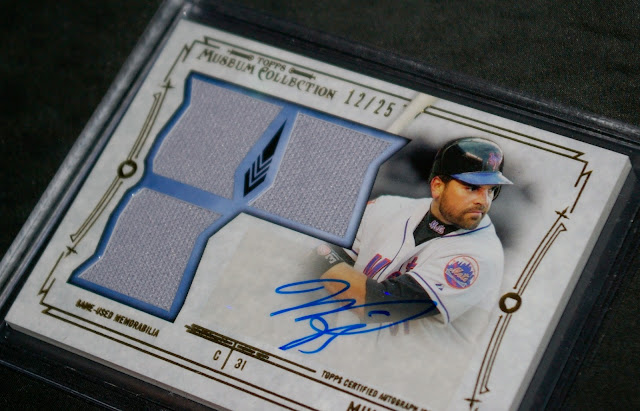 My streak of posting a Christmas Card on the 25th of every month was about to come to an end.. but No! The tradition continues.

I'm happy with this card.. though yeah, would've been nice if it was on-card and featured more interesting jersey pieces. But whatever, it's cool. Piazza certified auto and a Christmas Card.

So that's 100 cards even (101 if you count the 2002 unofficial variation). That wraps up my Mike Piazza collection. He's now off my wantlist. Really the only Piazza cards I've got interest left in are maybe any I'm missing from his brief stays on the Marlins and Padres. But if there are other "must-have" Piazzas you think I need in order to have a respectable PC, feel free to let me know in the comments. Otherwise, I'm done!
Posted by defgav at 12:39 PM