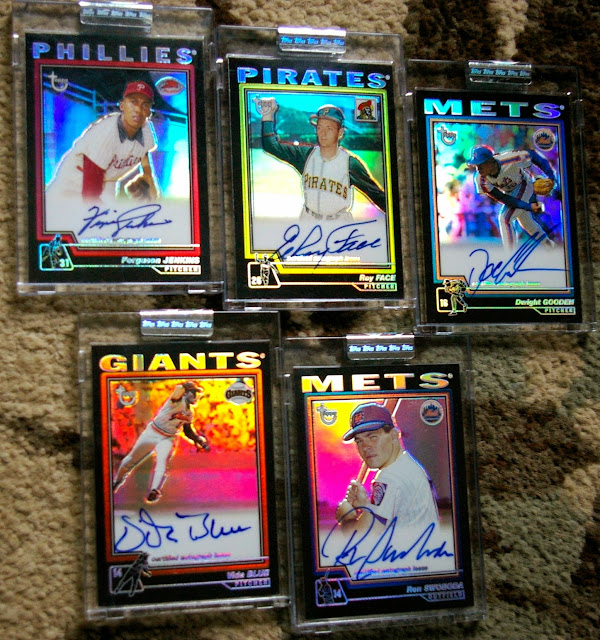 It feels like this collecting goal is coming of age!


Over all (counting both base autos and refractors), I only need 8 more cards to complete the set. Only counting refractors, I've now hit the halfway point in the goal, with 38 out of the 76 cards. (My end goal is to have a full refractor set, and once I have a refractor of a particular card, I no longer need the base auto. I already had base autos of these 5 cards, so that means I've now got the base autos available for sale or trade.. so please get in touch if you're interested.)

Let's take a closer look at each of these beautiful new additions... 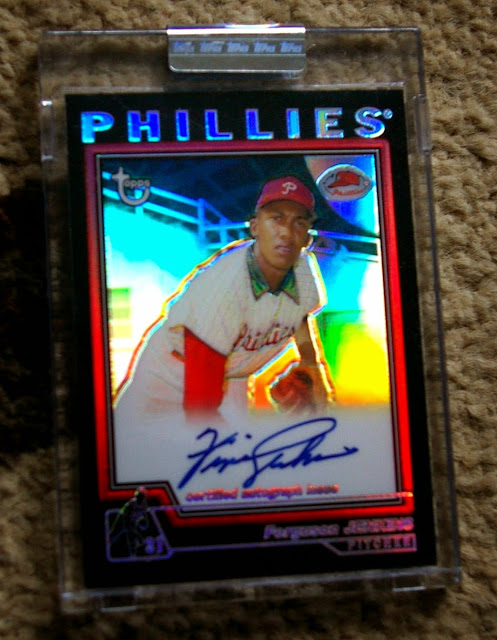 Ferguson Jenkins' base card is one of the most plentiful autos in the set. I have two of them, in fact! But the refractor is obviously more scare, at just 25 copies like the rest of the refractors. But still, there were a whopping three copies of it on eBay at the same time.. unprecedented since I've been working on this set. Obviously, I went with the cheapest of the three. Nice looking card with an early photo of the Hall of Famer. 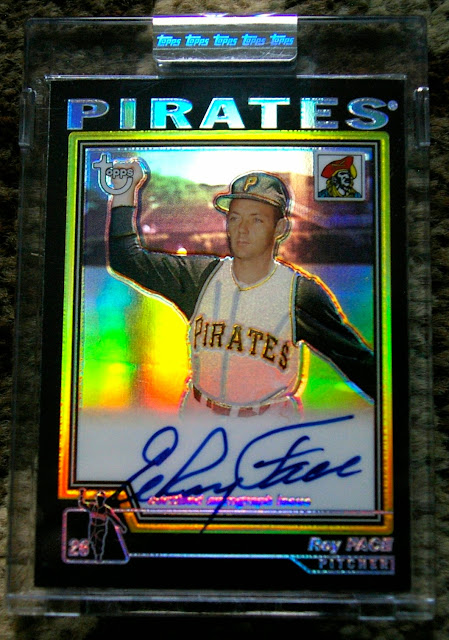 Now, Roy is thee most common base auto in the set, all alone in the "Group H" category, the final grouping and most plentiful in regards to odds of pulling. But again, all the refractors are #'d /25, so there are as many of it as any of the big shots in Group A. I don't recall ever seeing the refractor for sale before, so when it popped up for a decent price, I jumped on it even though I could have tried making a Best Offer. Probably cost myself a few bucks due to my impatience and paranoia, but I'm ok with it. Great looking card. To quote Wikipedia, "A pioneer of modern relief pitching, he was the archetype of what came to be known as the closer, and the National League's greatest reliever until the late 1960s, setting numerous league records during his career."


Next, someone call a Doctor! 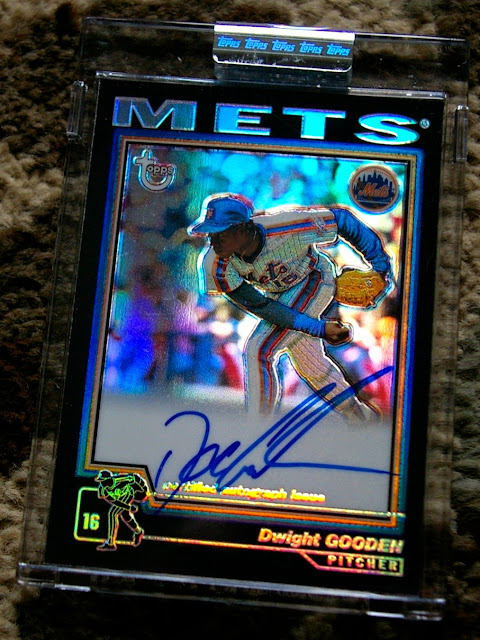 The seller surprised me with a bonus card.. 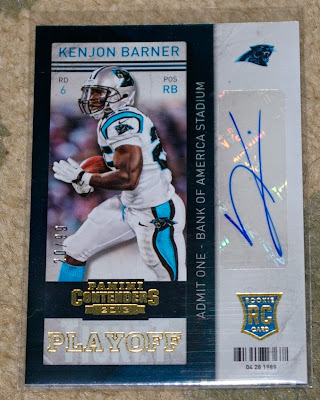 Wow, I've gotten junk commons thrown in as surprise bonus filler before, but never a hit like this! (unless a seller was making up for something)! A free auto #'d 20/99! It's kinda of a random card.. nobody I had heard of. Kenjon hasn't done much in the NFL, but turns out this guy was a standout at University of Oregon a few years back, so maybe my Portland address was what inspired the choice. I don't care much about the Ducks, to be honest, but lots of people around here do, so the card might come in handy as a little gift one of these days. So big thanks to that seller! (More eBay seller generosity to follow.)

Now back to the black rainbowed cards.. Vida Blue and Ron Swoboda below came from the same seller. 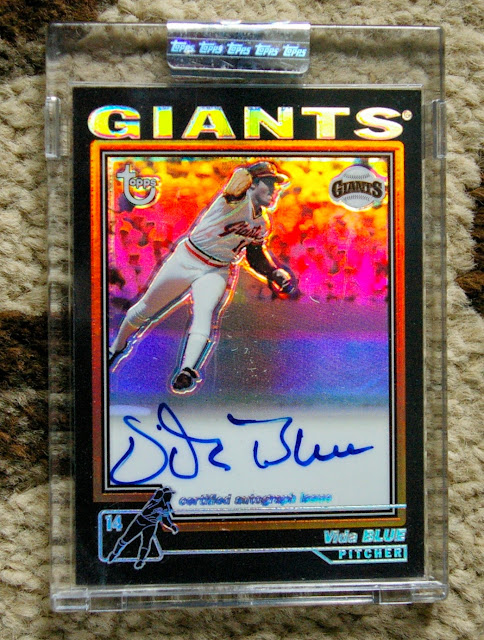 I love Vida Blue. He was even a main PC guy of mine for a while. This is probably the strangest photo in the set. What the hell is he doing? My guess is he just snagged a chopper to the left side of the mound. Just a bizarre image. 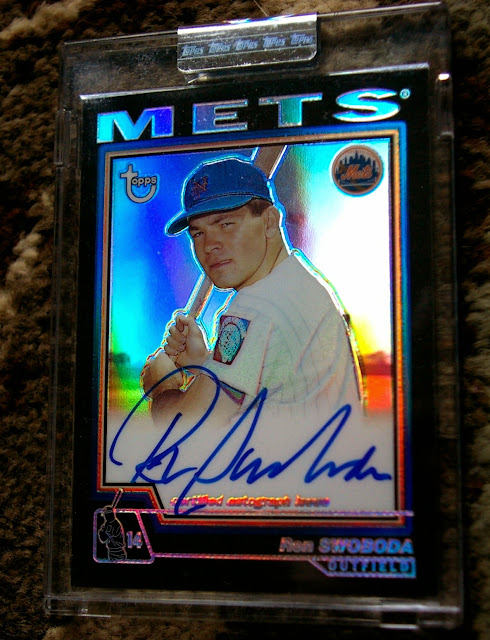 In contrast to the Vida card, Ron Swoboda soothes us with a boring posed shot. No offense to Mets fans, but Swoboda might be the least-renowned guy in the whole set. His career wasn't all that long or notable, but his claim to fame is that he got hot down the stretch in '69 and was key to the Miracle Mets winning it all that year. Nice card.

Anyways, the seller has a pretty nice selection of 2004 Retired refractors, and I've bought from him at least a couple times before. I thought these two were both a little overpriced, and there wasn't a Best Offer option. But I've learned from eBay pros like Dodger Penguin that sometimes if you send the seller a message ("ask a question") you can occasionally get them to work with you on a deal. So I sent a message offering a deal if I agreed to buy both the refractors I was interested in. He quickly agreed and everyone was happy.

So, once in a while when I make an offer on eBay, if I include a message I'll say something like, "I'd really love this card for my collection, but $__ is the best I can do. Thanks for your consideration. Check out my blog Baseball Card Breakdown!" It's not just a cheap plug, but also a sly way to give the seller a way to contact me outside of eBay without breaking the eBay rule of giving out your email address. A seller will sometimes give you a better deal away from eBay (or as many dealers call it: feeBay! lol). It's a risk (not covered by eBay's buyer protection guarantee), but it's worked out fine the 2 or 3 times I've gone that route.

But yeah, even though we worked out our deal through eBay, the seller still took a few minutes to check out my blog and told me he liked it. And then a few days later when the Retired cards showed up, he knocked me out by basically cleaning out my Desperate junk-era Dozen wantlist on the sidebar! 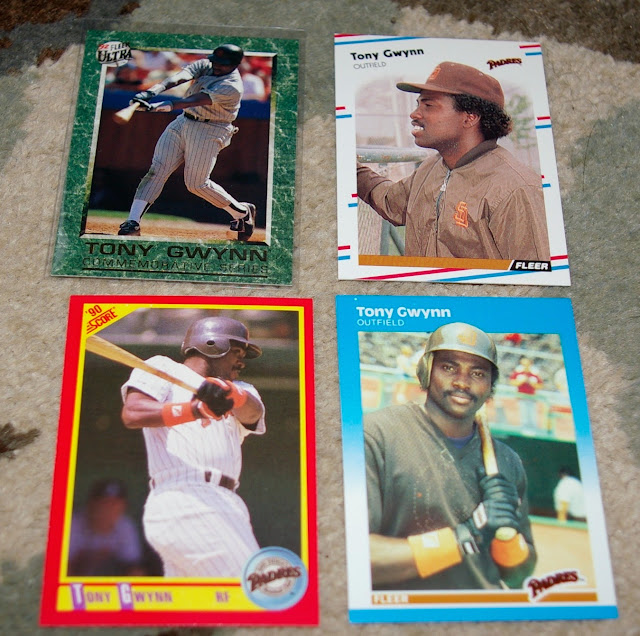 These Gwynns filled some notable gaps in my PC. I'm especially happy about that Fleer Ultra insert, as it was the last one I needed to wrap up that nice tribute series. 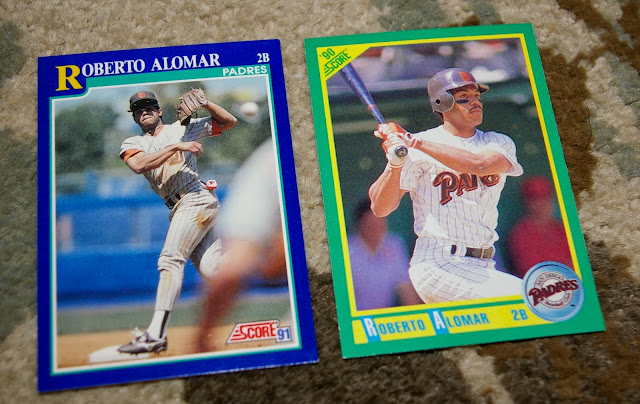 A couple needed Robbies, too. Man, I'm just now realizing '90 Score is an underrated set. The Gwynn and Alomar are both great looking cards. I feel like Score would be held in much higher regard today if their first few sets weren't so damn overproduced. 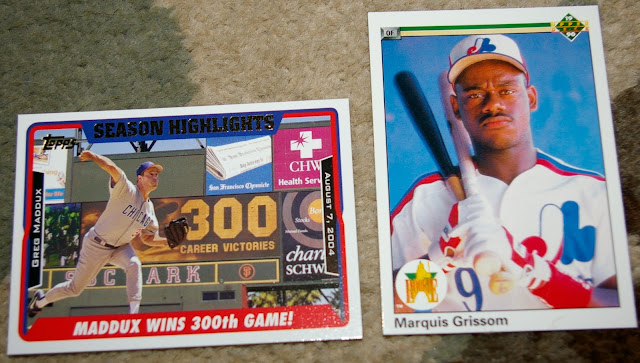 And a Maddux and a Marquis! When I posted my 100 Greg Maddux cards and ceremoniously stuck a fork in that PC a month or so ago, everyone got all up in my face and said my Maddux collection ain't shit unless I got that 2005 Topps card commemorating his 300th win. So I put it on my wantlist and now I've got it and hopefully that'll silence my razor-tongued critics. As for the Marquis, regular readers will know that's a particular card I'm trying to amass a silly number of. I've gotten over 300 now and every one counts (just ask Greg Maddux there).

So big thanks to Southpaw Cards for being awesome and surprising me with some bonus wanted cards. Sure, they're not expensive cards, but they've been on my wantlist for a while and the gesture is very appreciated. The only card in my "junk" wantlist he didn't hook me up with was 1984 Donruss Gwynn, which yes, I'll admit isn't really junk but I was just trying to sneak it in there. Ha.

Well, that's it for today. Thank you for your unwavering patronage!
Posted by defgav at 3:55 PM