I don't own the cards in this post. I just stumbled upon something intriguing while browsing eBay and figured I'd get a post out of it. (Turns out this is old news.. made the rounds on Twitter and a blog or two back in December 2014.. but screw it, I've already drafted this post, so here it is.)

I'm in the market for a Piazza auto to cap off that PC as I creep up to 100 different cards of the guy.

This Mike Piazza auto from 2014 Topps Supreme caught my eye: 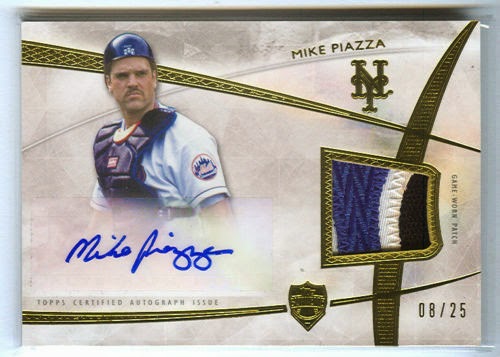 Check out that signature. That's not Mike Piazza's signature!

This is Mike Piazza's signature... 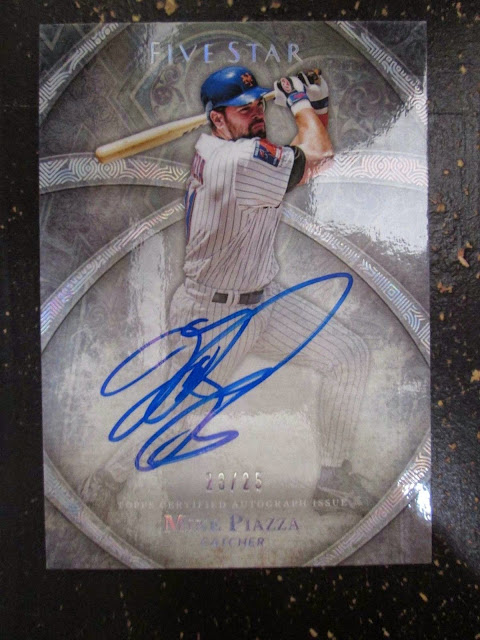 Veeeery different (nowhere near as legible). 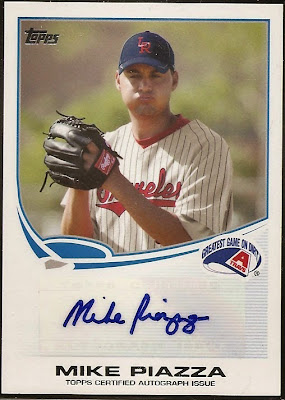 Yeah, see? That's clearly the guy who signed the sticker on the card at the top of this post. I actually own this one (it was $2), and I've shown it and mocked the unfortunate photo choice on the blog before.

Looks like the mistake is confined to this 25-run card. They have sold for around $60 a pop on eBay (with no caveat regarding the auto). I'm curious if the winners are aware of the error. At the time of this post, there aren't any currently on eBay, but you can see 3 such cards in the completed auctions.

Just more proof that sticker-autos suck. The mixup wouldn't have happened if Piazza was signing the actual card, instead of a plain sticker on a sheet. You gotta wonder how often illegible autos get mixed up and nobody notices the difference. I'll bet it happens more often than you'd like to think.

Anyways, thanks for stopping by.
Posted by defgav at 10:08 AM