blog talk: cliques on the cardsphere

What many call the blogosphere, I call the cardsphere to distinguish the community of card-collecting blogs from all blogs on all subject matter, since lord knows there are a trillion blogs out there... politics, parenting, TV shows, whatever. I don't think the term is really catching on, but screw it, I'll keep on calling it that. Cardsphere! Cardsphere! Cardsphere! (Failed attempt at a Simpsons ref.)

While the cardsphere is somewhat of a tight-knit group, with just a few hundred active blogs (291, to be exact, according to Sports Card Blogroll's last count), it's still big enough to where no one with a life and job can be expected to keep up with all of them. Plus you probably wouldn't want to, as not everybody cares about every type of card. For instance, I tend to quickly scroll through most non-baseball posts, if I click on them at all. And certain blogs might just not grab your interest.. maybe they're boring to you (I'm not a fan of those short "here's one card; the end." posts), or perhaps you think the author is an asshat or whatever. I'll admit there are 2 or 3 card bloggers out there whom I simply don't like much. And I don't doubt there are folks who feel that way about me, too (though it eats me up inside!) Posts such as this one are kind of obnoxious, I know. I was a little drunk when I typed most of it up a few days ago. But back on topic...

Maybe you guys have noticed there seem to be cliques on the cardsphere just like any other social setting. I don't mean it in a negative connotation like snooty Mean Girls or anything. Groups of guys tend to be frequent trading partners and comment on each other's blogs, but don't often venture off into other avenues of the cardsphere outside of those few familiar blogs. It's kinda funny.

I see a lot of guys regularly comment on Night Owl Cards who just about never seem to pop up anywhere else. I get it. If I only had like 5 or 10 minutes out of my day to spend on card blogs, Night Owl would probably be the one I made time for. When I first got into card blogs, they were a few months there where his was the only one I read with any frequency. But now I've branched out and am a regular reader of a ton of blogs, plus a casual reader of even more (via Sports Card Blogroll) on slow days at work when I get caught up but still have time to kill.

I'm worried that once my current job ends (which will be by the end of the year), my next job may not afford me the ample downtime that I put toward blog reading and writing. So it's a possibility 2016 will see Baseball Card Breakdown slow way down, and me having to make some tough choices about which blogs to try keeping up with reading. I'll probably just have to start being more selective about which posts I read.. you know the deal: looking at the title, the top picture, and the first couple sentences.. deciding if I care enough to give it a few minutes of my time. But I'll cross that bridge when I come to it.

As I've mentioned in the past, I'd love to get a job in sportscards. Then, reading card blogs would be like doing market research! I'll take this opportunity to brag that I was recently recruited for the possibility for working for Beckett Media. Some of you guys probably got the same email. It was flattering to be approached, but I'm not willing to relocate to Dallas or New York at this time, so I had to turn them down. Last year, I was approached about the possibility of working for Upper Deck down in Southern California. I'm definitely honored to be able to say I've twice been approached about working in the sportscard industry, though sad I haven't been able to make it work yet. Perhaps in a couple years, my wife and I will be ready to move and I'll be able to seriously pursue that path. For now, I'll just hold out hope that a card-related company might consider me for a remote position where I could work from home the majority of the time. There aren't many jobs in the card industry here in Portland, OR. There's actually one of the bigger eBay card consignment sellers based in the suburb Lake Oswego, which isn't too far relatively, but would be too much for a daily commute. And selling cards on eBay isn't exactly a dreamjob.

But all this rambling it leading up to a trade post! See, Shane from Shoebox Legends is a guy I've heard about on other blogs for a long time, but for whatever reason, we "ran in different circles" or whatever, and neither of us followed each other's blog. But after reading so many trade posts from great packages and PWEs he sent out, I figured I'd try to get something going with the guy, so I started reading his blog and throwing a comment here and there.

Happily, Shane welcomed me with open arms and offered to send me a card package with no return needed. What a great guy! (Of course I'll do my best to shoot him back with a return package of cards he'd like.)

And so here's the initial bunch of cards from Shoebox Legends!: 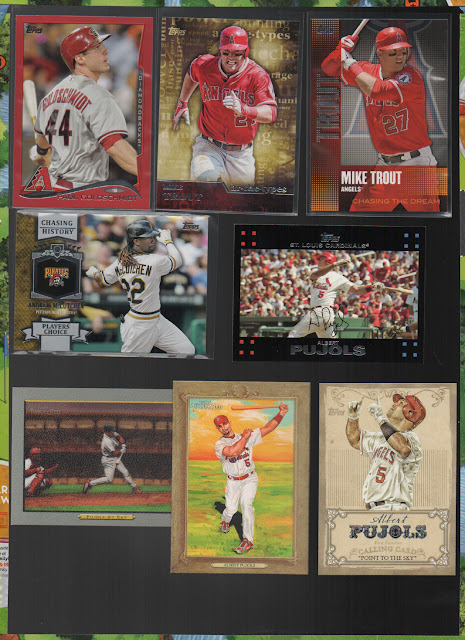 Here are some current guys, with a Goldschmidt parallel, a couple Trouts, a McCutchen insert, and a few Pujolses. 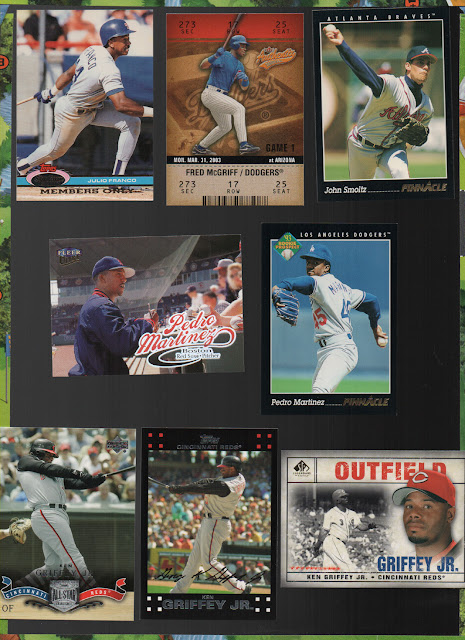 Here are some more favorites from the not-too-distant past. 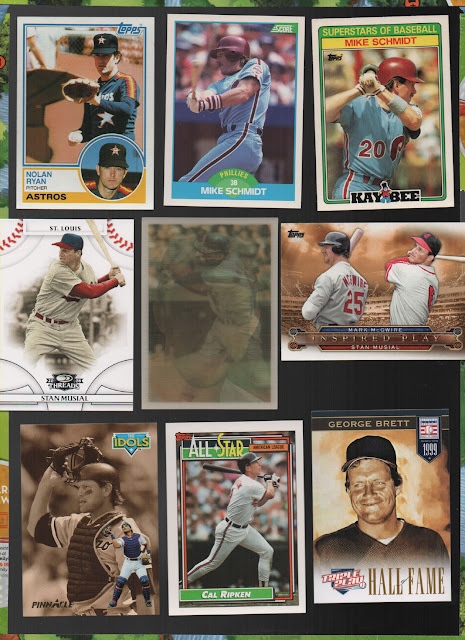 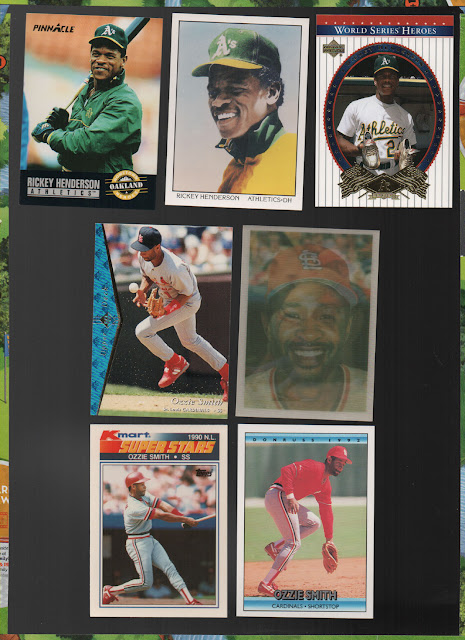 Nice selections of Rickey and Ozzie that are welcome additions to those respective PCs. 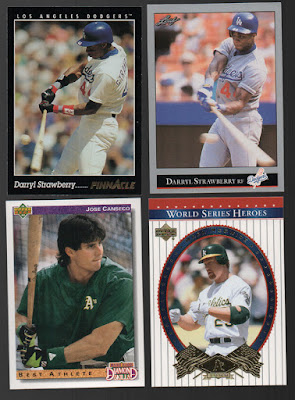 Some "guilty pleasure" PC guys for me. I figured I'd try to get all the Springfield Nine into the Hundred Card Club. Well, Mark McGwire wasn't on that classic Simpsons episode, but he did have a funny little appearance in a later episode. Looks like he's a Padre now, with sources reporting he'll sign on to be San Diego's hitting coach. I'm not super thrilled about that, but we'll see how it works out. 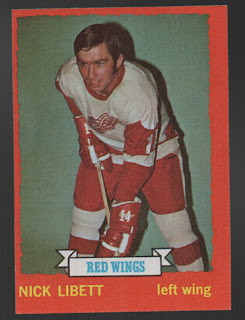 Thanks for the cards, Shane! I really appreciate it, and again, I'll shoot you back some cards soon.

But back to my ramblings on cliques on the cardsphere, what do you guys think? Do you ever read a blog and its comments and feel like an outsider? How many blogs do you read on an average day? For a fun little challenge, after you read this, check out the Sports Card Blogroll and try to comment on a card blog that you've never commented on before. Who knows, you might just make a friend and a new trading partner!
Posted by defgav at 4:42 PM