December is Gavin Month here at Baseball Card Breakdown. I collect cards of guys named Gavin, but being the niche interest it is, posts featuring this Greatest Gavins minicollection of mine don't get a lot of reader interest and so I don't always bother to "announce" when I get new additions. But hey, blog traffic is typically down in December anyways, plus my birthday is in this month, so that gives me a good enough excuse to bust these out now. Expect a post or two per week on the subject as we close out 2015.

Oh wow, cool fact I just learned: there are 3 active Gavins in the minor leagues right now, and all 3 of them also have December birthdays. What are the odds?! So I'll just take that as further justification for making this Gavin Month, and I'll try to line up future posts with their birthdays if I can.

The first Gavin to be featured this month is the newest to pop up in a national card product. Gavin Lux is still in high school, but Leaf has included him in their 2015 Perfect Game set(s). While I'm excited to add some of these cards to my collection, I'm not diving in nearly as hard as I did with the last young baseball-playing Gavin to come around the cardboard scene, Gavin LaValley, whom I rainbowed pretty aggressively after he showed up "Draft" products late last year. Perhaps if/when Lux gets drafted, I'll be more into picking up his cards, but I don't want to go nuts over a guy still in high school. But with Topps hogging the MLB license, Leaf and Panini have turned to the amateur ranks for options with baseball products.

But yeah, I'll still keep an eye out for good deals on cool-looking cards of his. Here's what I've picked up so far. 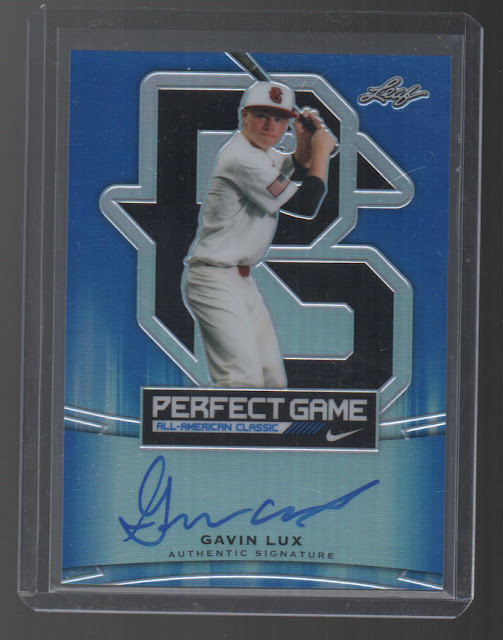 This pretty blue refractor parallel is #'d 3/25 on the back.

FYI, Gavin is a senior in high school in Kenosha, WI, and is committed to Arizona State next year. 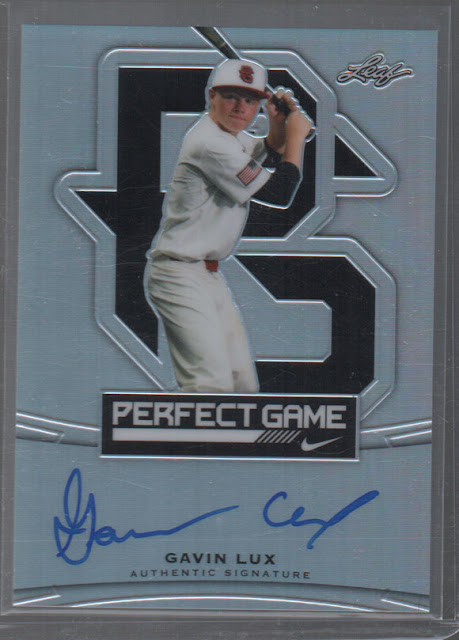 Here's the unnumbered version of the previous card. It's a refractor, but that doesn't come across on the scan. (I'm getting low on batteries for my camera, so I've been sticking with the scanner more lately.)

Lux's uncle is Augie Schmidt, the 2nd overall pick in the 1982 draft. He was a bust and never made the majors, but I'm sure he's a valuable mentor to his nephew Gavin. 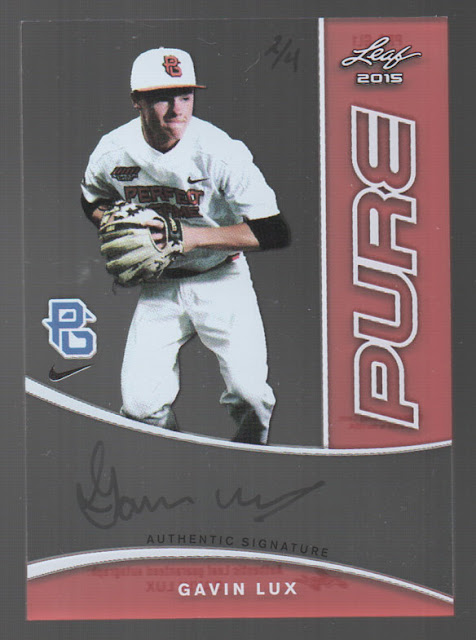 Here's my last (and best) Gavin Lux card for the time being. It's one of those slabs of acetate, acrylic glass, lucite or whatever (hard clear plastic) masquerading as a "card." These are kinda neat. It's #'d 2/4.

He has a lot more Leaf cards on eBay (pointless parallels, a few stickergraphs, some stickergraph/relics), but for now I'm happy with these 3 on-card autos. Really the only other cards I'm on the lookout for are maybe a Christmas Card (12/25), and the variation of his auto that includes an inscription of his Twitter handle. I don't know why, but that seems cool. The last one I saw sold at like $20, which is a bit steep I think, but I'm hoping to find one for around half that someday.