And the rest of the box from Marcus

In a post last week, I started digging into the box Marcus sent me recently as he works to downsize his collection. Let's go ahead and plow through the rest of it now.

We start with autos, autos, and more autos. 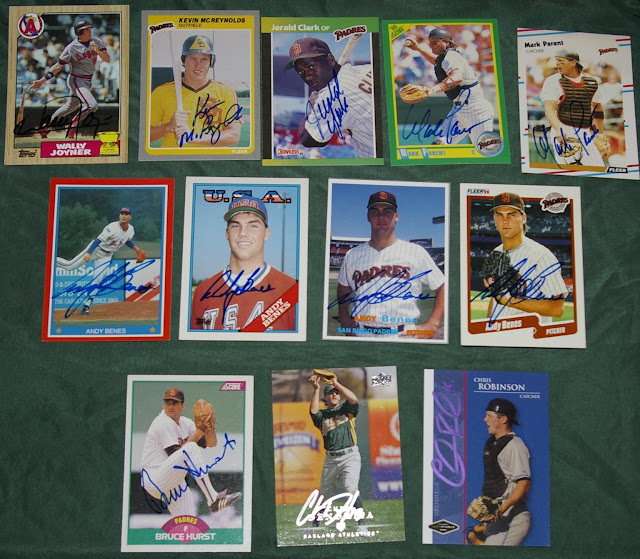 Lots of good stuff here. Love that '87 Joyner. A bunch of Benes (including a couple oddballs). Denorfia on the bottom. 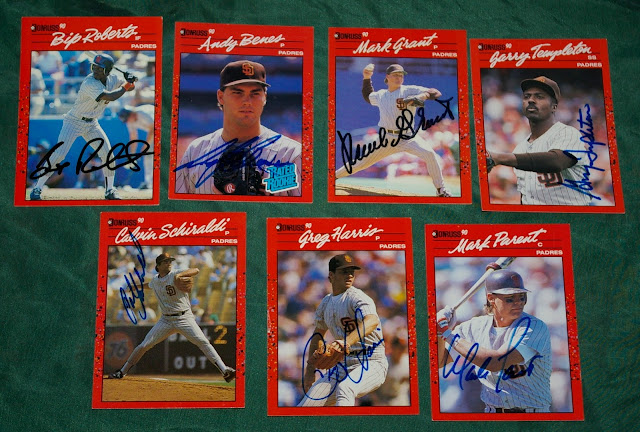 Ah, the Padres team of my youth. With this jumpstart, I wonder if I could put together a signed Padres team set of 1990 Donruss without too much trouble? That would be pretty neat for me since 1990 Donruss (for better or worse) was the first wax I ever ripped. Sentimental value, you know. 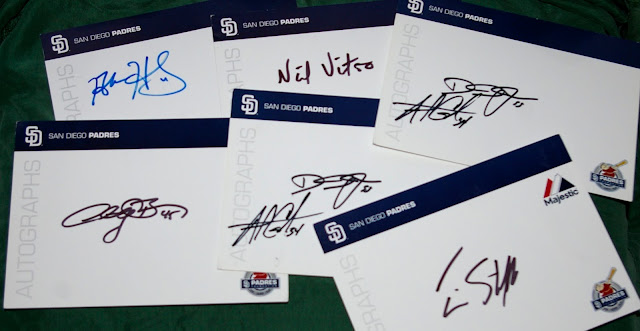 Some postcard-sized generic autograph sheets. This might be tough to identify, but let's give it a shot. I'd guess the first one is Nick Hundley (#4). Next is Nick Vincent (#50). The "D" name seems to be Dale Thayer (#55). "AG34" looks like it could be Adrian Gonzalez, but he wasn't #34. Ok, I just looked up #34 and it's Andrew Cashner.. cool! And #45 looks like "Greg B" but again, I can't find a match. Ok, looked up #45 and it's Anthony Bass. I originally thought the last one is was Eric Stults, but now I'm pretty sure it's Tim Stauffer.
I might trim these down to standard card size, perhaps doing something interesting with them like doing sketch cards around the signatures or something. 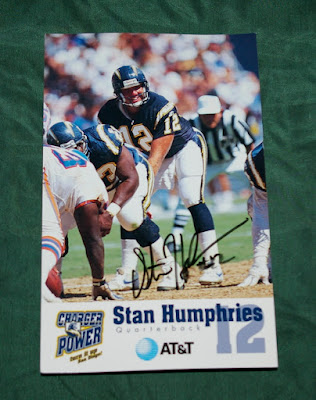 Howbout a football auto? This postcard sized Stan Humphries auto is pretty cool. Sounds like the Chargers will be sticking around for at least another season, so that's cool, I guess. But ownership has definitely been shitting the bed left and right, and it won't be easy to win back a lot of disgruntled San Diego fans such as myself. 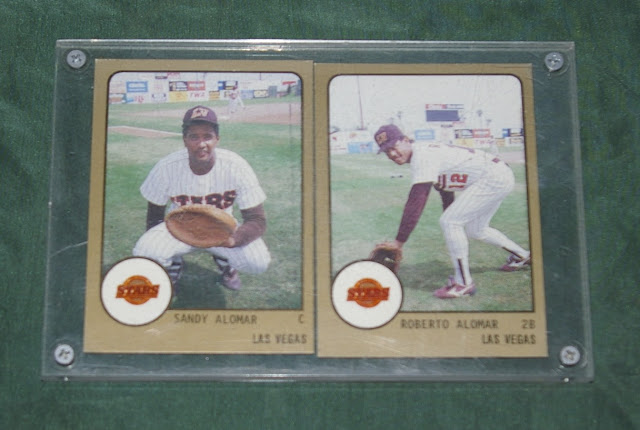 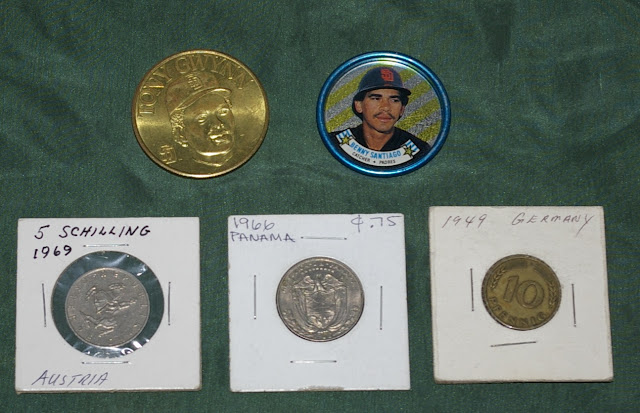 Marcus added some variety to the box with a few coins, including 3 actual money pieces. I've never been all that big on coin collecting (besides several bucks worth of 1976 drummer boy quarters I've been collecting since childhood), though I do have a few random foreign coins, so I'll throw these in with them. 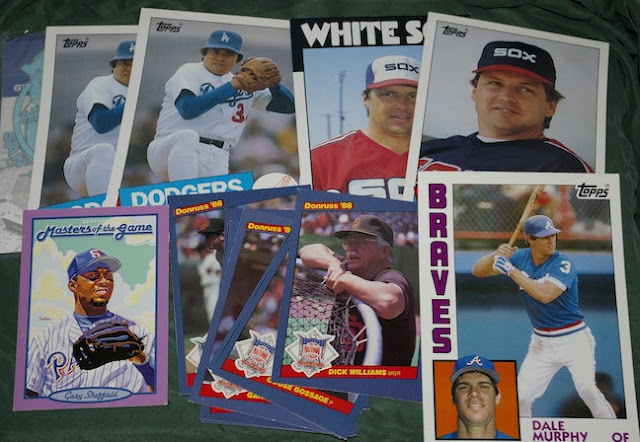 Here are a bunch of oversized cards. Even that Sheffield in the corner is larger than a standard card. The Fernando(s) and Dale Murphy could be available if anyone needs them. 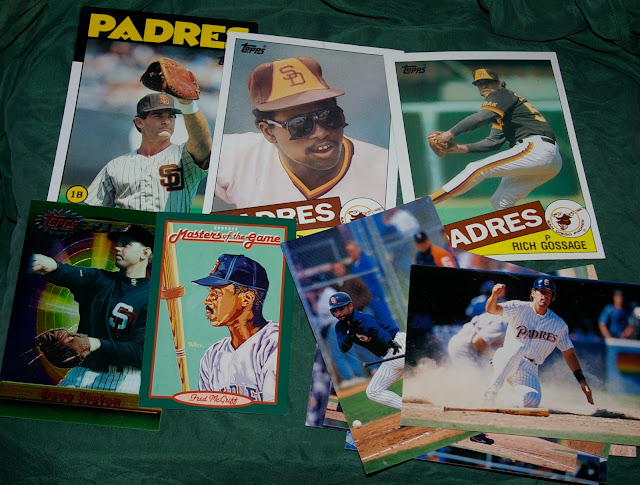 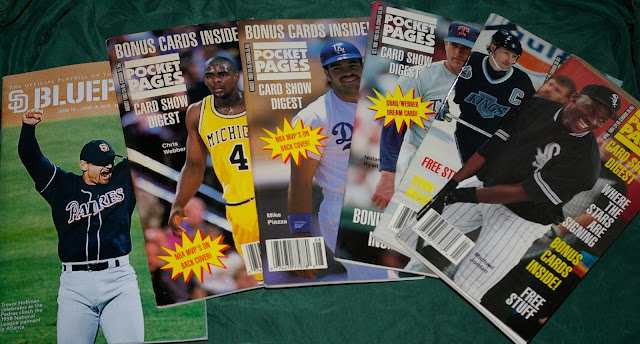 Here we've got a Padres program from 2013, and then a few issues of Pocket Pages from 1993-1994. Gotta admit I wasn't familiar with Pocket Pages the publication, but they seem kinda cool. The best thing about them is obviously that they contain cards... 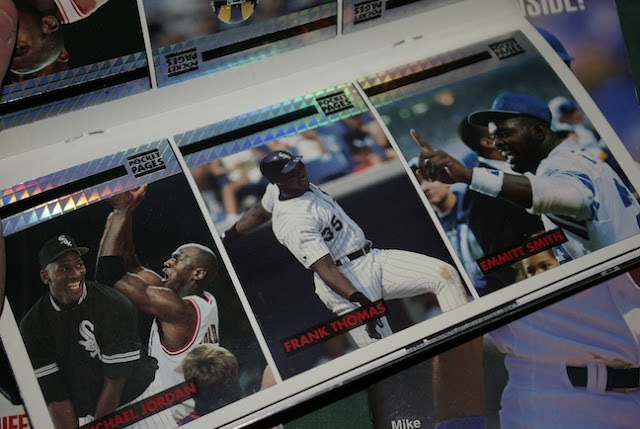 They even got some shiny on 'em. What do you guys think? Should I take these out and cut them up into individual cards, or keep the magazines intact? I'll probably cut them up unless someone yells at me not to. 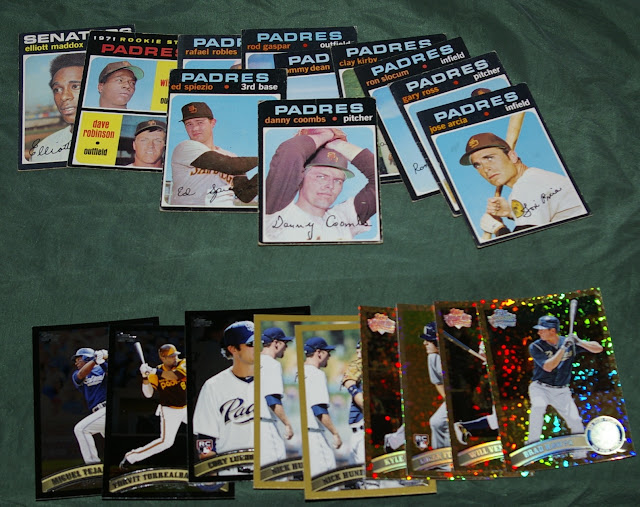 There were a bunch of 1971 Topps cards, a few of which will likely be needs or upgrades for my setbuild, though I haven't checked yet. Also included were several 2011 Topps parallels which I can put toward that frankensetbuild. 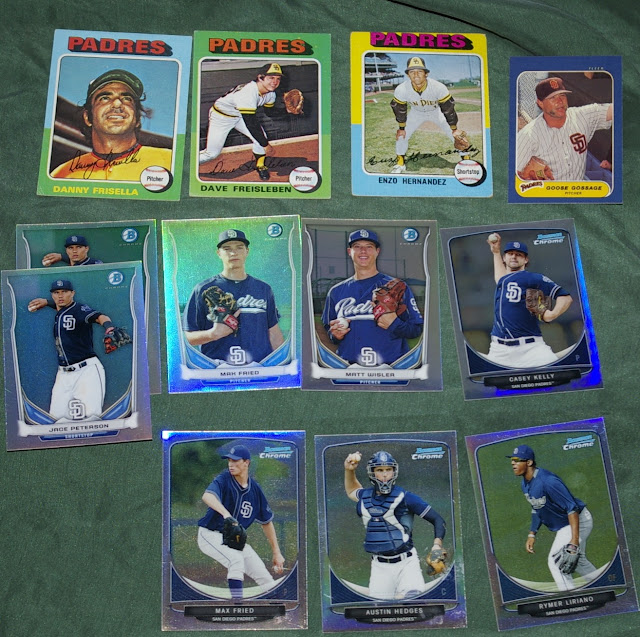 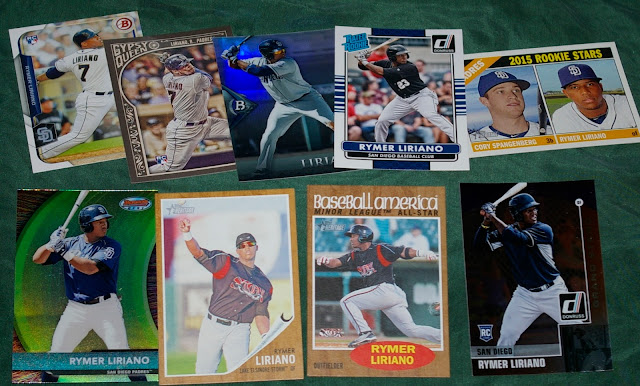 So many Rymer Liriano cards! Bummer he never quite blossomed with San Diego. They recently cut him loose and he wound up with the Brewers. All the best, Rymer! 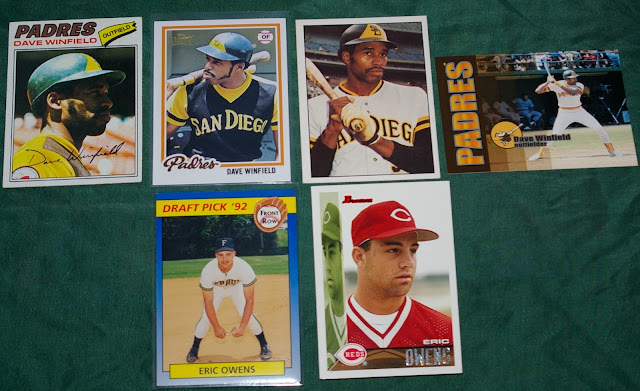 A couple of my all-time favs, Dave Winfield and Eric Owens. Pretty sure I needed most of these. 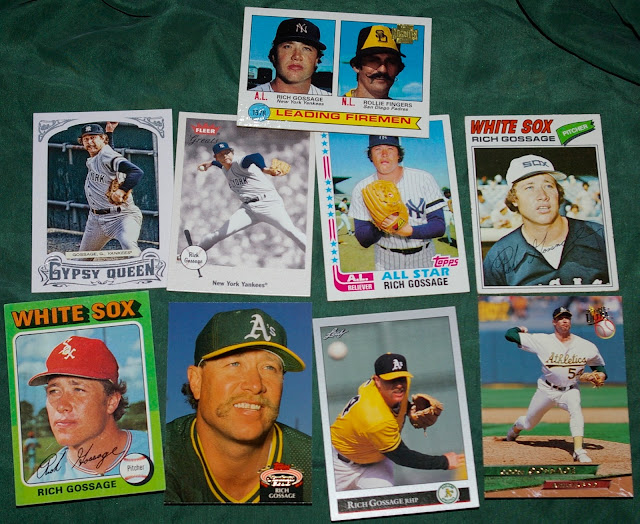 More Geese, including a duo from his early days as a White Sock and a trio from his latter days as an A. 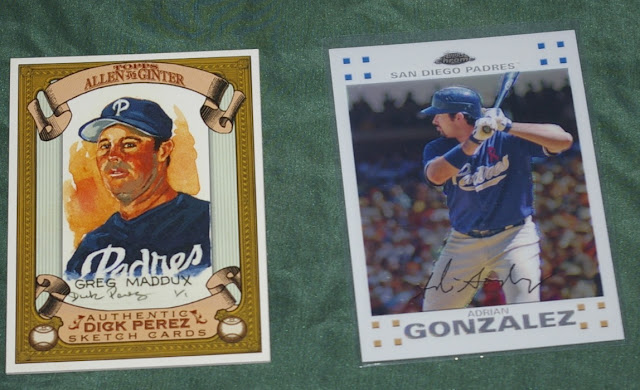 Greg Maddux 1/1!!! Ha, no, that's from the annoyingly deceptive A&G Dick Perez insert set or whatever where Topps went ahead and included Perez' handwritten 1/1 on all the mass-produced cards, leading to great confusion and disappointment among collectors. The Adrian refractor also made me scratch my head a moment... 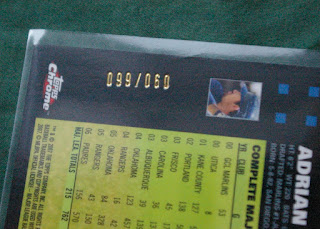 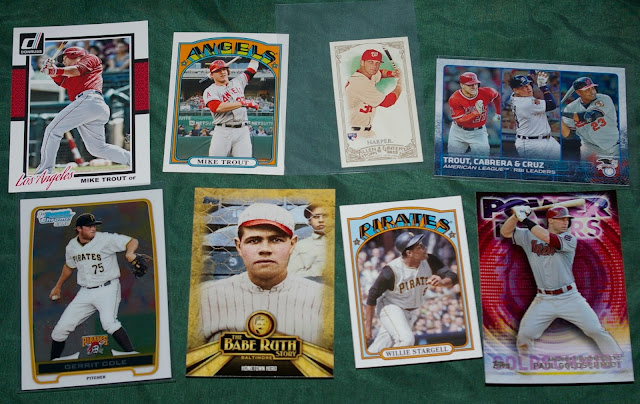 While the Padres were definitely the stars of the box, non-SD fellas could be found as well. A couple Mike Trout cards. Bryce Harper mini. Rainbow foil 2015 RBI LL. Gerrit Cole rookie. An addition for my Non-Yankee Babe Ruth PC. And favorites Willie Stargell and Paul Goldschmidt. 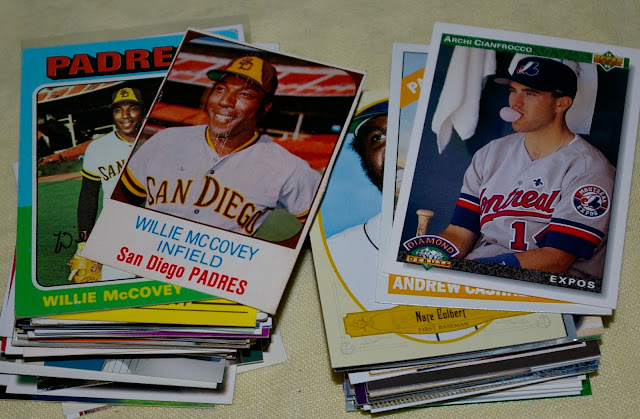 And so that's gonna wrap it up. There were plenty more cards I could show off and write about, but in the interest of time, let's call it good.

Again, big thanks, Marcus, for passing down these cards to me and please just say the word if/when I can return the favor with anything!
Posted by defgav at 3:39 PM