Similar to yesterday's Goose success, today we have another signed custom 1977 Topps card that never was featuring a short-term stop. 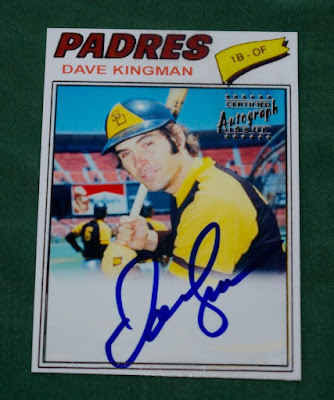 Kingman was an "all or nothing" big swinger, and I know him best for being the first player to hit 400+ home runs without being inducted into the Hall of Fame. That's less of a "magic number" these days in the post-steroids-crackdown era, but back when I was a kid reading the backs of baseball cards, I couldn't believe all those dingers couldn't punch his ticket to Cooperstown.

His 1977 season was quite eventful, as he bounced around with 4 teams that year. My hometown Padres were one of those destinations (2nd of 4), with Dave donning the brown and gold for 56 games. He eventually ended the year with the Yankees, helping them clinch, though he couldn't play in the postseason having been acquired after the deadline.

He doesn't have much in the way of cardboard from his San Diego days-- I think like a couple logo-less oddballs, and that's it-- so seemed like a good idea for a custom. I'm pretty sure similar customs to this one have been made before (there aren't a lot of good quality photos floating around of Friar Kingman besides this one), but I did make this pretty much from scratch rather than yoink an existing example online. 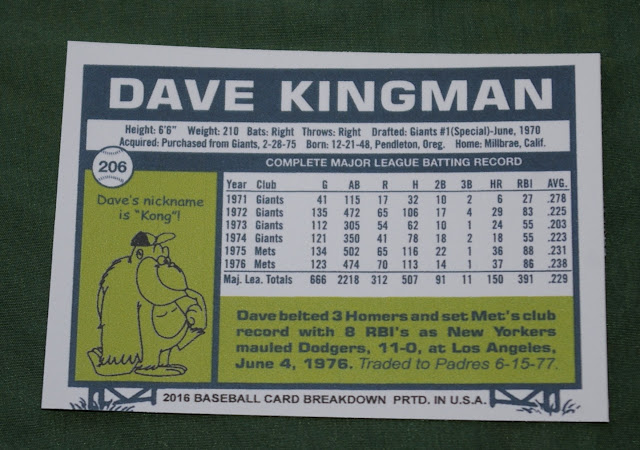 The back came out a little diamond-cut, but not too bad. A lucky time-saver, I was able to find a clean (white) back of his '77 Topps to modify thanks to being an SP in Archives a while back.

So, yep, another successful TTM! No fee, returned in about 2 weeks.