Let's recap the trade packages that've come in over the past week or so, then we'll figure out the other winner in my big 700th Post contest.

Judson from My Cardboard Habit is a good guy. He recently busted some 2016 Topps and lamented pulling a Marlins hit that no one on the cardsphere would be interested in. Gavin to the rescue! I'm always happy to trade for Giancarlo Stanton cards I don't have. 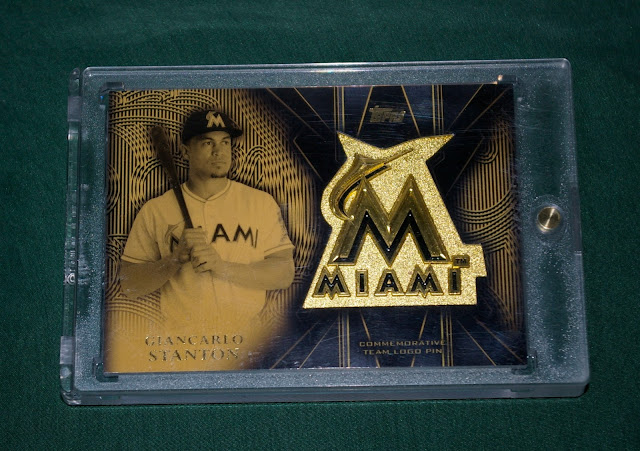 This beaut of a manurelic pairs nicely with the similar Kris Bryant I got from the group break I was in recently. 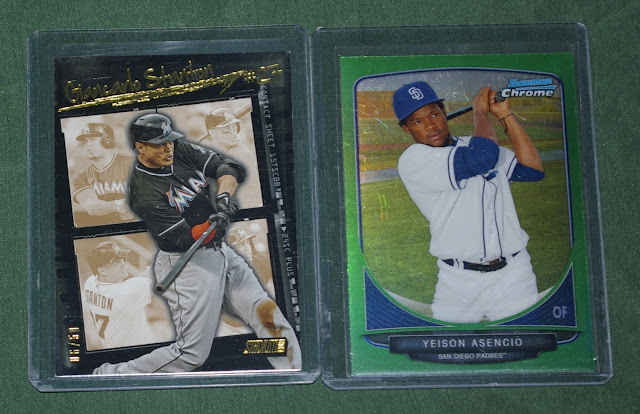 Judson threw in a couple additional cards. I had asked for the green Yeison Asencio, since it would pair nicely with the gold auto I have of that card (I hope 2016 is the year Asencio breaks out and gets called up. Last season he hit over .300 and led the AA San Antonio Missions in hits and RBI, but at 26 years old, it's time for him to step up), but the Giancarlo #/50 was a very pleasant surprise. Thanks, Judson! I hope those those 1969 Topps I sent were useful and best of luck to you with your setbuild. Any of you guys with some available '69s should get in touch with Judson about a trade.

Next up is Pirates fan Nolan, who doesn't have a blog, as far as I recall, but I traded with him once a year or two ago. Speaking of Marlins, he recently got in touch with me to graciously take the box of unwanted Marlins I was trying to clear out of my house. He was also interested in getting some custom-made customs made by me. They came out pretty nicely and I plan to feature them in a separate post soon, with his blessing. But in addition to a few bucks for the project, Nolan was cool enough to send me this item as a thank-you: 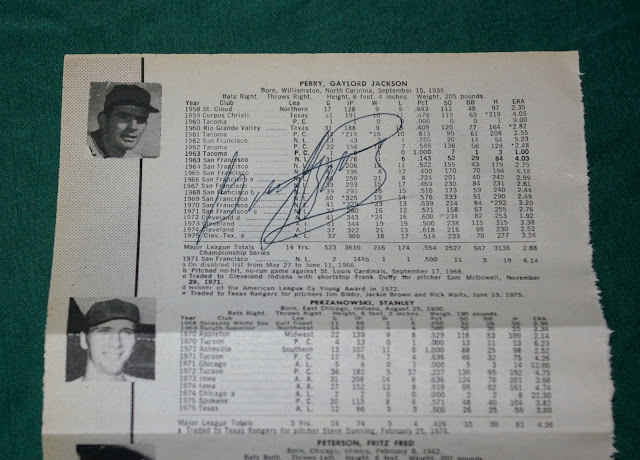 A Gaylord Perry autograph on a page of a 1976 baseball almanac type thing. Sweet! I haven't decided if I'll keep it as-is, or use it for a custom cut-auto. It's kind of big, so I'll probably leave it for now.
Thanks again, Nolan!

Next up, Jon from the cleverly named blog A Penny Sleeve For Your Thoughts got in touch, also interested in some customs I had whipped up. He called dibs on the extra Hrabosky TTM success I had available, and was also hoping for an unsigned Alan Young custom of mine to try a TTM with himself. In return, he sent me a nice, stuffed PWE full of good stuff.

Three cards for my 2011 Topps parallel frankenset. And good ones, at that! Clayton Kershaw. The Willinghammer. A sparkly Jose Guillen sunset card. 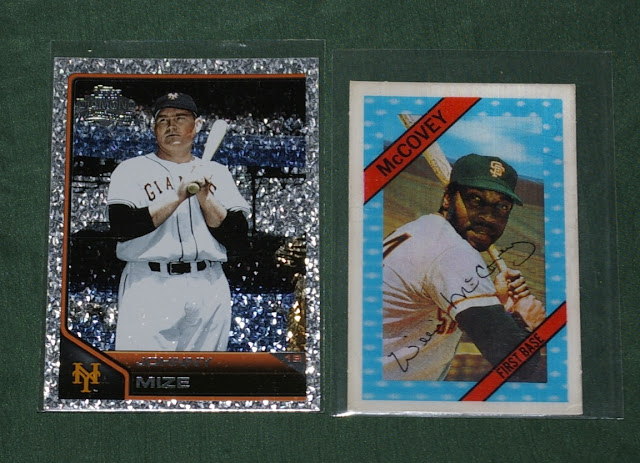 I'm not including Lineage in my setbuilding dreams, but am never against a random shiny card popping up in a trade package. And I love that Kellogg's McCovey! Seems like a long time since I last got a vintage McCovey I needed. Definitely a nice addition to the PC. 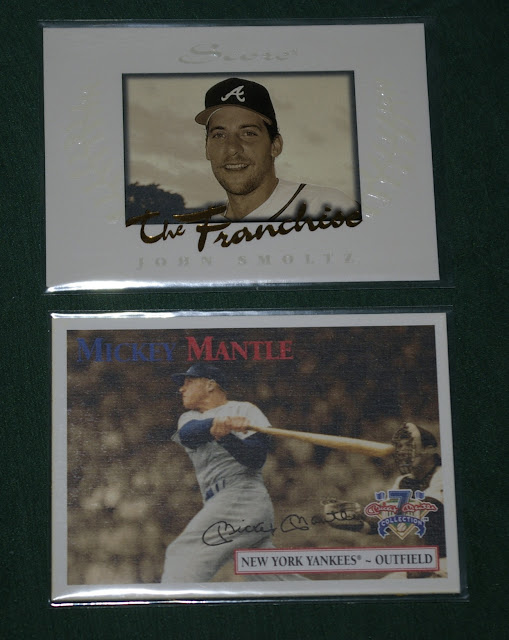 A double dose of horizontal cardboard with a glow-in-the-dark Smoltz and a Mickey Mantle oddball. 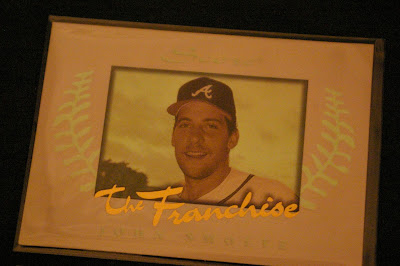 Here's Smoltzy glowing a little, lest you think it was one of those darn non-glowing parallels that look nearly identical in the light.. 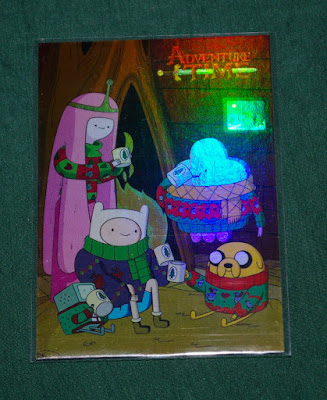 Is this the first Adventure Time card in my collection? I think it might be. Maybe the second. It seems to be a shiny insert too. Pretty cool. Great show. 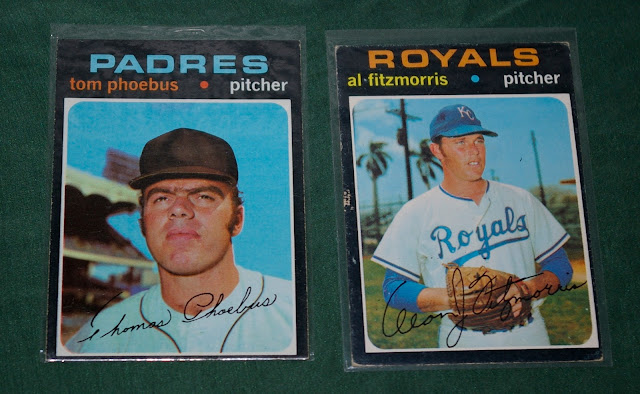 A couple appreciated needs for my 1971 Topps setbuild. My progress has been slowed in recent month as I haven't been actively chasing down the remaining cards, but I'm slowly getting there.. 169 more of these black-bordered beauties left to go. 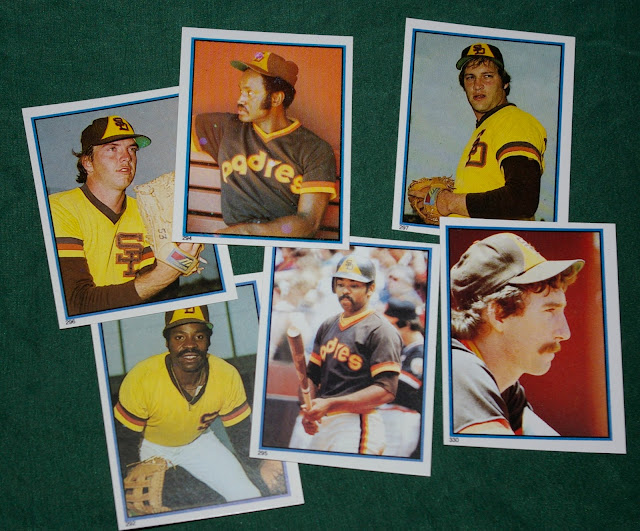 I don't recall seeing these 1983 Topps stickers before, though I'm familiar with the blue-bordered 1982 versions thanks to ripping a few packs of '82 Topps back in the day. Nobody I particularly collect in this lot, but that early 80s Padres uniform is my all-time favorite, so it's nice to see proudly displayed here.

Big thanks for the trade, Jon!

That wraps up the trade recap. Now let's do the 2nd chance drawing from my latest contest.

And let's randomize once for a winner: 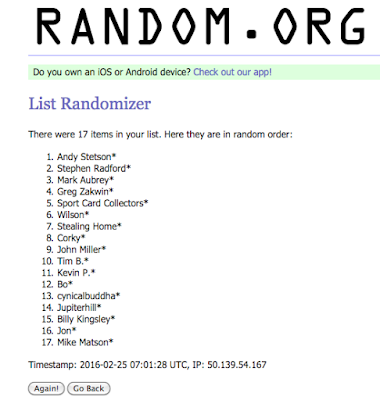 Wouldn't you know it, the first guy alphabetically also ended up first randomly. Congrats, Mr. Stetson! Email me with your address n' stuff.
Andy seems to be a new guy on the scene, among the Cub fan ranks.

Thanks again to all who entered! Hopefully I'll get a few more contests happening during this upcoming season. Don't forget to comment on my blog once in a while if you want to be eligible for the full prize packages that will be available.

Thanks for reading and see you next time.
Posted by defgav at 4:03 PM