It's Valentimes (sic) and amore is in the air. I used the impending holiday as motivation to make a reality of this little custom set I had kicking around. I wanted to do a Custom Nine (which is essentially a 9-card stand-alone insert set) of my favorite pretty ladies. And so that's what I did! 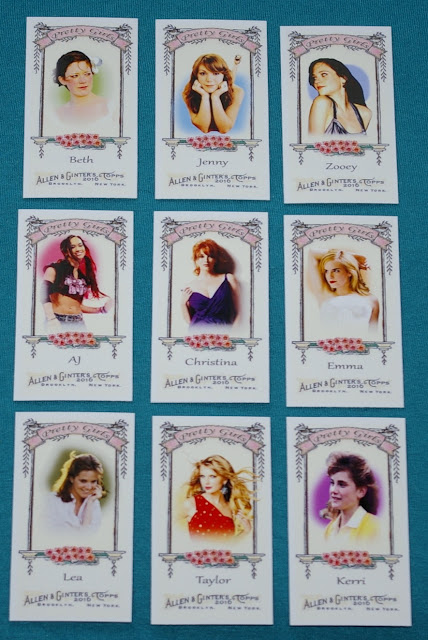 It's called, simply enough, Pretty Girls. I tried to not over-think the selection process, and so these are 9 beautiful women that sprung to mind when thinking of my personal "dream girl" and I'm happy with the choices. It's an incredible bunch of smart, talented people who also happen to be quite lovely.

The design is clearly a ripoff of homage to Allen & Ginter. I think these are the first Gintery customs I've ever tried my hand at. I decided to make them minis, since the A&G mini inserts are always more fun than the full-size ones, wouldn't you agree?

Enough of an intro.. take a look at each of the cards! 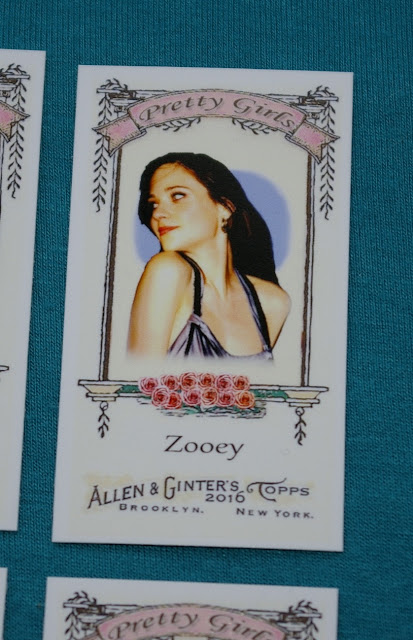 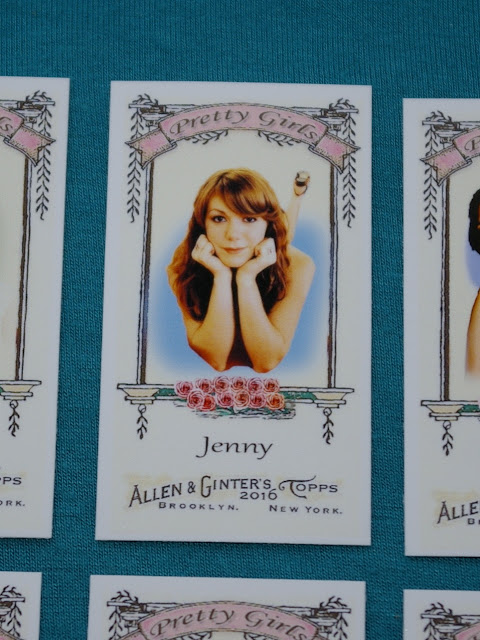 The band Rilo Kiley was a big part of my life in the decade of the 00s. I saw them live many times, collected their live recordings, and was even an admin on the forum for their fansite that had upwards of a thousand users. Jenny Lewis, the main singer and songwriter, was just as awesome as could be and I was big into her for a long time. I still like her since she went solo, though am nowhere near as bonkers as I was back then. 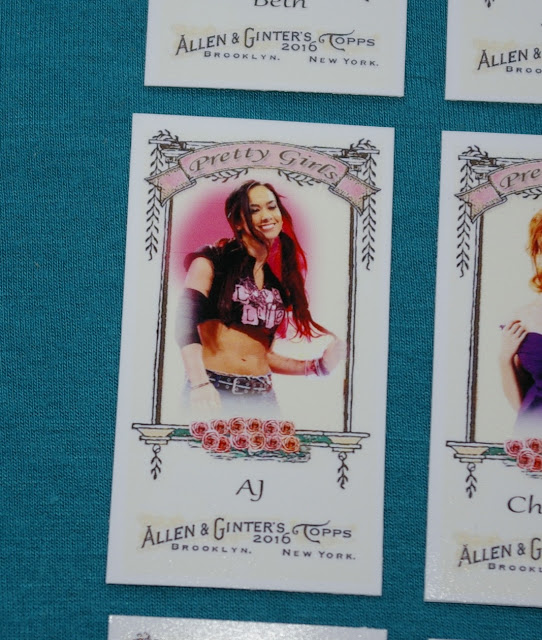 AJ Lee, my cardboard concubine. I am not into WWE at all really. But somehow I've become a big fan of hers and love collecting her cards. She's super cute and has a great vibe. I also thought it was brave when she spoke out about the unfair wage gap between male and female wrestlers. Soon after that, she walked away from the scripted sport. Badass. 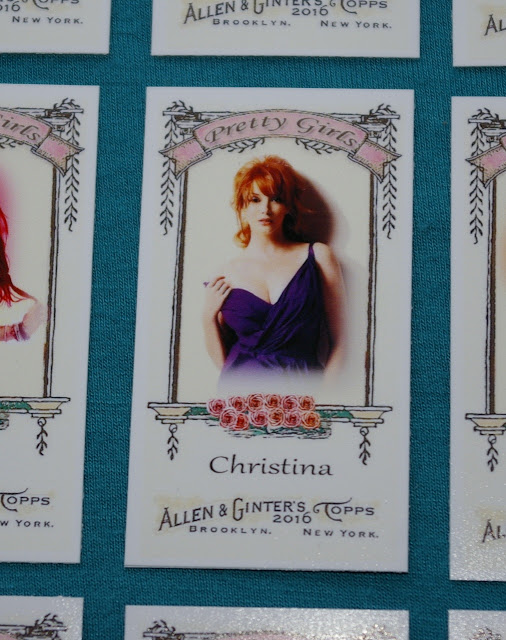 Christina Hendricks was, in a word, pa'DOW on Mad Men. She might be my #1 celebrity crush (The cards in this custom 9 are not in "rank" order or anything, FYI.. I designed them all first, then arranged them in a way that looked good in a theoretical 9-pocket page [see top photo]). This is not the first custom I've made for Christina, though the other one was definitely sillier. I've also got her certified autograph from a Firefly product, and it's easily my best girlie card. (Link to my big Christina Hendricks post from a couple years ago.) 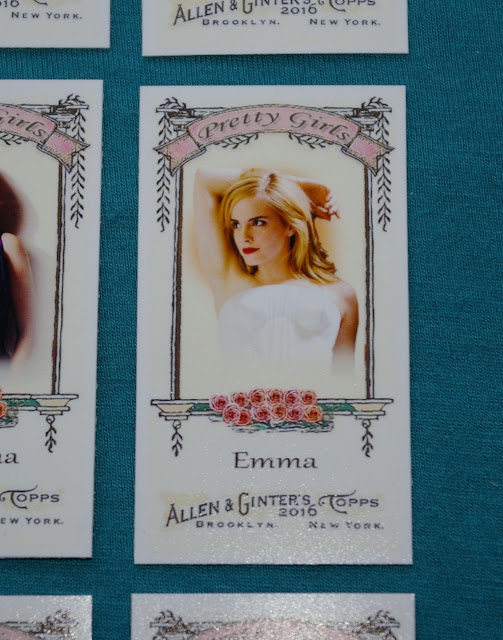 Emma Watson knocks my socks off.. incredibly beautiful and well spoken whenever she opens her mouth. Big fan. Crazy thing is I've never even seen any of the Harry Potter films. I'm about halfway through the audio books. I'd like to finish all the books first before I watch the movies. Someday! 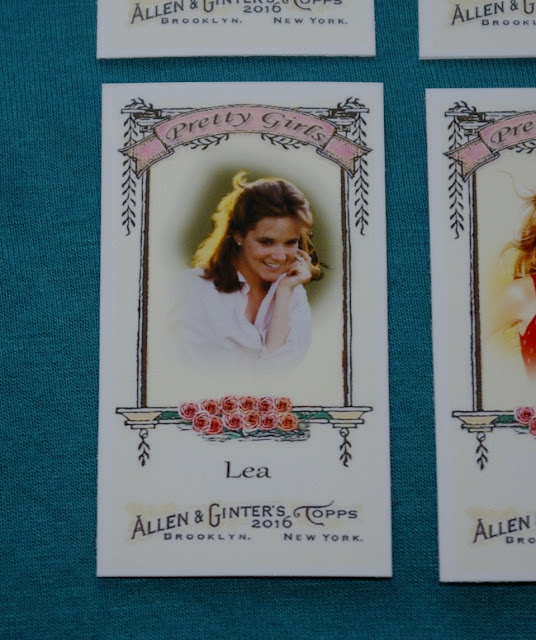 This one is a retro/throwback selection, but Lea Thompson in the mid 80s (circa Back to the Future part 1) is just my ideal of a pretty, sweet girl. Those dimples! Such a cutie! She's still doing well today, don't get me wrong, but as for my dream girl list, I'm specifically going back to the 1980s with this choice. 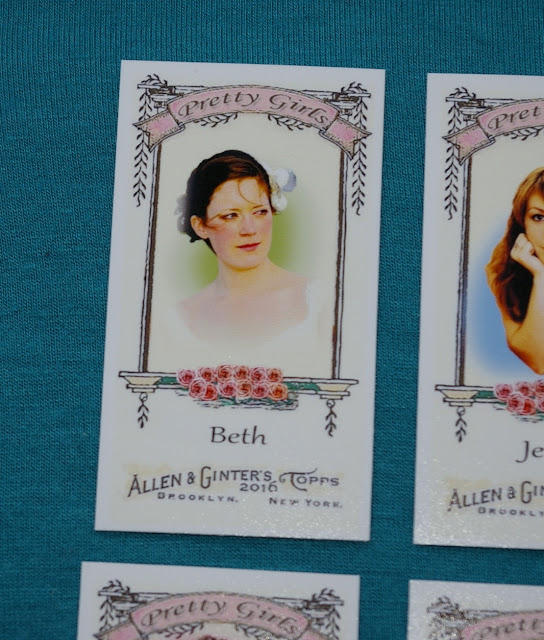 Here's the only person in the set I've had sex with (so far). Sorry, I couldn't resist that crude joke, but yes, I'm including my lovely wife Beth in my list of favorite pretty girls. I even gave her the #1 slot, though this post hasn't been in order. She's the best thing that's ever happened to me and I love the heck out of her. I gave her this card for Valentine's Day, and I think she appreciated the gesture. Granted, it would have been more romantic without the other 8 cards! 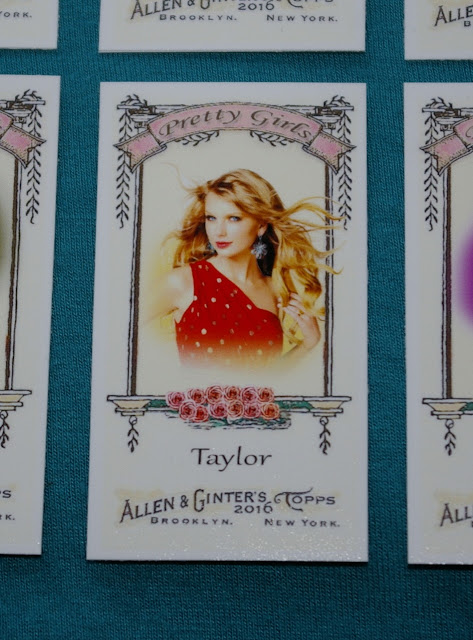 Taylor Swift is super hot, can't deny. I'm not really a huge fan of her music, though I'll admit her latest record has a bunch of catchy songs, a couple of which you might catch me singing along to if they came on after I had a few drinks. This was actually the final slot I decided on, with Ms. Swift just barely edging out the competition for inclusion in the set. I'm sure it means a lot to her. 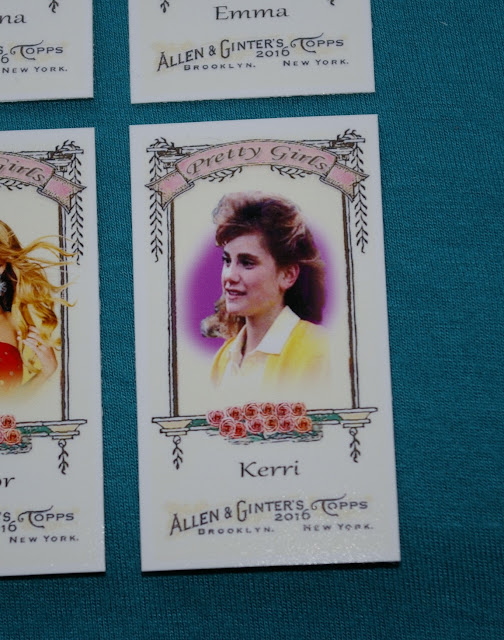 Another sentimental pick from the mid 80s. I've mentioned my love of The Goonies before (see my auto display project), and every time I watch it, I fall head over heels for Kerri Green's character Andy all over again. This is probably my least favorite of the 9 cards in this set, as there weren't a lot of good pictures of Kerri out there to choose from. I had to use a screen grab from the movie. Not perfect, but her cuteness still shines through. Although she's not really active as an actor anymore, she still looks great when she pops up. 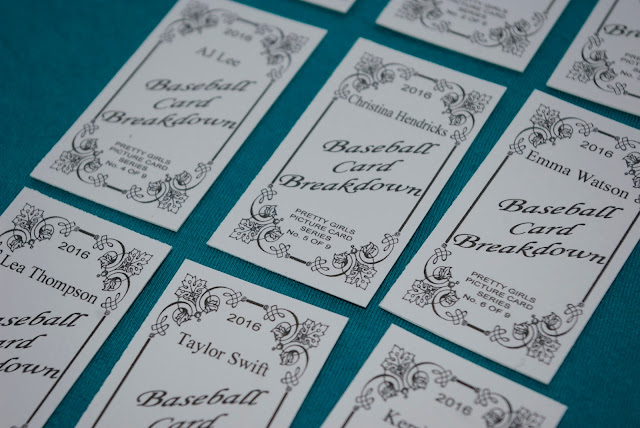 And that brings us to the end of the set. Up there's what the backs look like.

Honorable mentions need to go to Cyndi Lauper (another mid 80s favorite.. circa "Girls Just Wanna Have Fun" and "Goonies R Good Enough"), Kate Upton (I expect her exclusion may be controversial), Katrina Bowden, Tina Fey, Janelle Monáe, Sarah Silverman, Carrie Fisher.. Really, the women I find incredibly attractive could fill a 792 card set. But 9 is a good number to stop at.

These minis look and feel great in-hand, and are all available for trade, per usual with my customs, so drop me a line if you're interested. While I made the set with only myself in mind, I'd be happy to spread copies around. I will offer to swap out my wife's card for a special custom designed for you with whoever you ask for (You could send me a pic of your significant other to use, or request a celebrity of your choice). Of if you want my wife's card, that's fine too (creep!).. Maybe I could even get her to autograph it for you.

Thanks for reading and Happy Valentine's Day!
Posted by defgav at 2:24 PM