The Simpsons custom set for Homer at the Bat

A couple years ago, I did a blog series called The Simpsons Fortnight where each day I posted about a player who guested on the classic "Homer at the Bat" episode of The Simpsons (it ended up not lasting the full fortnight I had originally planned, but I did cover all 9 players from the episode). Each post featured a couple junk-era custom jpg's using images from the show. This was back before I was making hardcopy customs, though a while later with the help from a guy I knew, I did make a limited run of magnet cards featuring some (not all) of the virtual Simpsons cards I had whipped up.

Anyways, now that I've gotten the hang of printing out customs, I had been meaning to make hardcopy customs out of these designs. And so that's what I did! 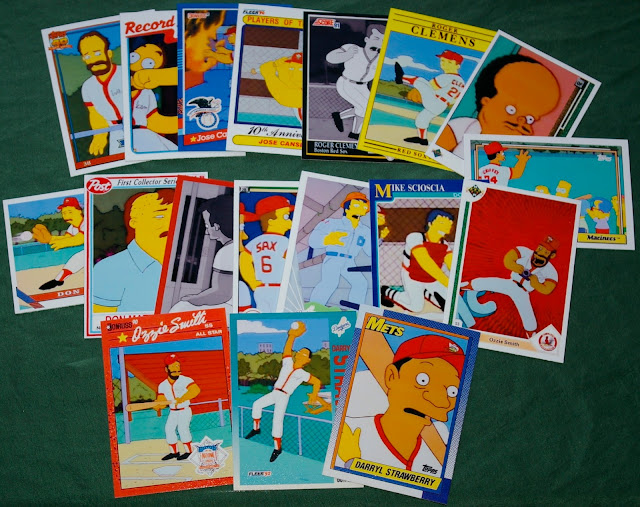 The autographed Simpsons cards from my recent Wade Boggs-centered contest were easily the most popular of the 3 designs I made, based on the response in the comments. It was no surprise when both contest winners chose that one. (That means I still have a couple each of the Cheers card and the Always Sunny card available for trade, BTW.)

The other catalyst for this project came from negotiating a trade with a reader named Josh, who had a couple nice cards I was interested in, and to seal the deal, he inquired about a set of my Simpsons customs. So I've spent a few hours over the past fortnight cleaning up those original digital customs from 2014, as well as creating backs for them, and making them a physical reality.

So without further ado, I present to you The 2016 Baseball Card Breakdown Simpsons "Homer at the Bat" Custom Card Set!

As with most of my customs, these are up for trade. Drop me an email if interested.
(Sorry, but these are not for sale. It's just too much of a headache from a legal standpoint.)

And if you missed out on the original blog series (it didn't get much traffic at the time), here are links to all 9 posts: