Man, what a week! It was my first week at my new job. It's my first time ever working downtown. And my first time ever relying on public transportation to get around. I really hate driving (or should I say I hate shitty rush hour traffic), so it's kinda nice to just hop on the train and not worry about stop-and-go traffic, photo-enforced stoplights, and all that crap. But it's definitely a different experience for me dealing with all the homeless and crazies that you encounter on public transportation and downtown. I might need to start carrying a couple ones on me for when I'm accosted by sweet old hobos (true, most of them are not sweet).

The job is fine, just going through a huge spreadsheet flagging duplicate accounts (as a baseball card collector, weeding out dupes is second nature to me, so it's right up my alley), but I'm still extremely pooped at the end of the day. The cool part is my wife works there so we can eat lunch together. We celebrated her birthday yesterday, and much food and drink was consumed.

But anyways, after the big week I felt like I "earned" this month's card show, so I was looking to be a big spender and hoping to land a bunch of celebratory cardboard for myself and trader buddies. It wasn't my best card show haul ever, but I did alright. I think I'll break it up into 2 or 3 posts.

Today's post features a few cards I got for about 71¢ each (7 for $5 deal). A common trait these all have is that they came in magnetic one-touch cases. Those cases are pretty cool, and are like a buck or two each new, so it would be a decent deal for like-new cases even without any cards in them! Throw a decent card inside, and I can't pass that deal up. 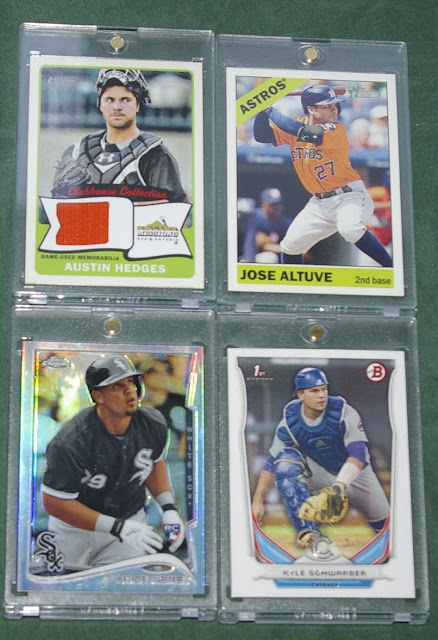 These four I would have gotten even if they were in traditional top-loaders. Austin Hedges is great defensively, and hopefully his bat will come along this year for my Padres. The Jose Altuve is the action photo variation and seems to be worth a few bucks. And then there's a couple of Windy City studs. 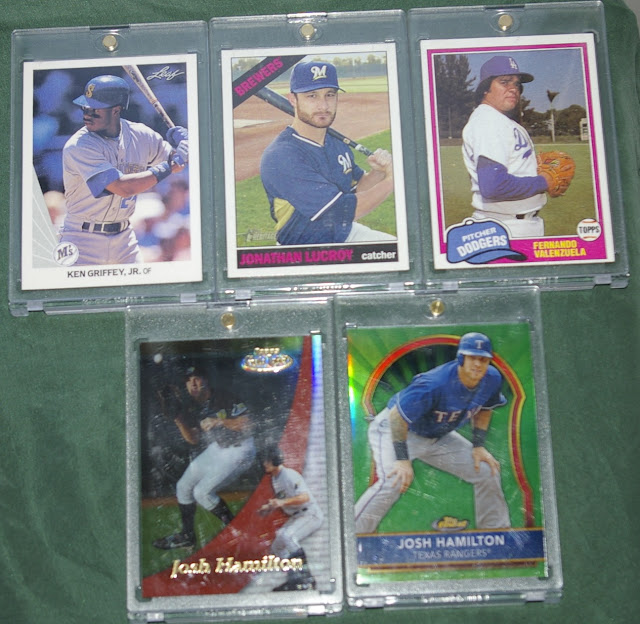 These cards I probably wouldn't have gotten were it not for their cases, which I will soon harvest for other cards in my collection. I kinda regret the Josh Hamilton purchases since those 2 cases are scratched up. The card on the right is #'d /199, though.
UPDATE: Just realized the Jonathan Lucroy is the Color Swap Variation, which is pretty rare based on the fact there's only one on eBay right now ($33) and it's sold out on COMC. I damn near put this card back but now I'm glad I didn't.. Might be my best pickup of the day. Hey Tony L., I just mailed you off a package today, but looks like I'm already working on the next one. 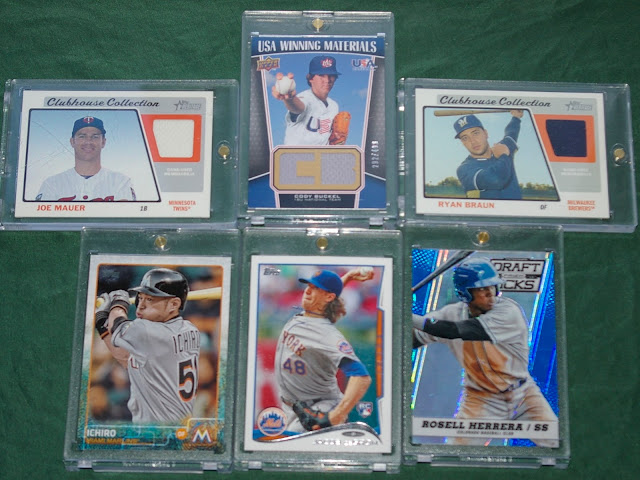 And here are a few more cards I probably wouldn't have been as likely to buy were it not for the sweet magnetics. I suppose these 6 are trade bait (and probably the previous 5 as well), so let me know if you want any of them (cases not included!)

So yeah, not a bad haul for under $11.. especially when you factor in the value of the cases. I'll show more cards I picked up today throughout the week. Thanks for stopping by!
Posted by defgav at 3:32 PM