I gotta admit with all the custom TTM requests I sent out mid January, I was kinda hoping maybe one of the cards would elicit an impressed response from the person in question. I know these guys get tons of requests per day, so you can't really hope for more than a signature. But you gotta figure they're mostly looking at the same few dozen cards again and again, so something different could be refreshing. In addition to getting cool autographed cards for my collection, the thought of bringing a happy eyebrow raise to these guys' faces is another draw for me to do custom card TTMs. And this was one of those! 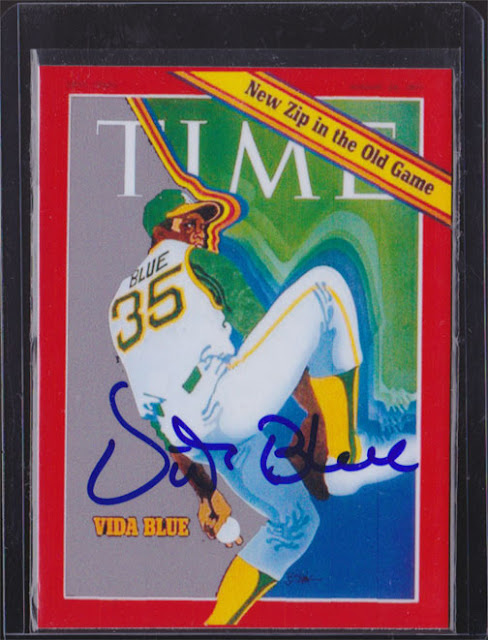 Now, I don't think this truly counts as a custom, because this image is an actual Time magazine cover from 1971 that I just printed out card-sized. So credit to the original artist, the late Bob Peak. I edited it a little bit, as it's originally black on the left, but I lightened it to grey so as to be a better destination for a signature. I think it looks pretty damn good!

And apparently Mr. Blue himself was taken with it too, writing me a note on my note, asking if I'd send him a few more copies! 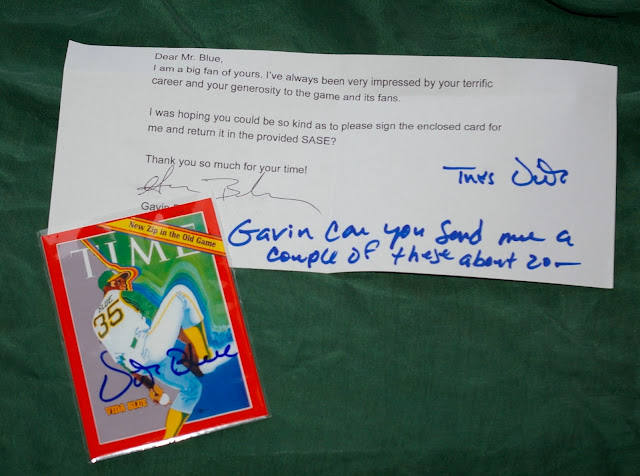 Very cool! I'll happily print off a few more of these to send him as a gift.

Vida Blue was a top-tier guy I collected for a while. His 1971 and 1974 Topps cards need to be on any "best cards of the 70s" list. I bought his 1970 Topps RC from the LCS when I was a kid and it was one of my most-prized cards. While I have 2 or 3 certified autos of him already, this is my first TTM from him and I'm very happy with it! 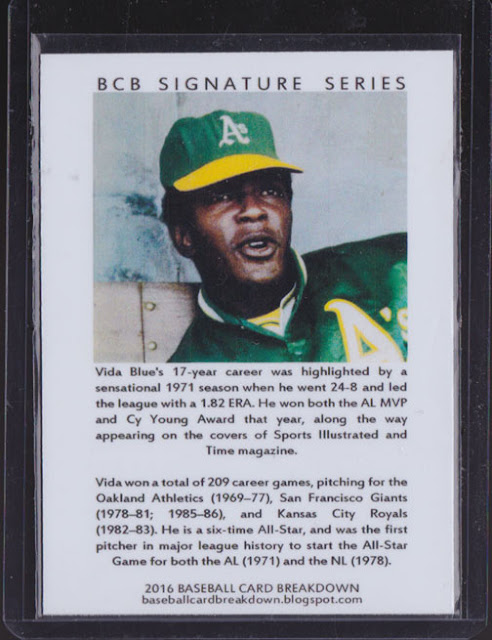 Vida Blue is known as a dependable TTM signer, BUT with the caveat that he charges a fee of $5 for each item. I was totally cool with cutting him a $5 check in order to ensure this success. That's much more desirable to me than receiving a free "sec" (Carrie Fisher), or paying an outrageous $50 per item fee (Whitey Ford), or the uncertainty of not getting a successful return. Five bucks seems totally fair.


Yesterday was a banner day for me getting TTM returns, with not only this one, but two other guys as well. Stay tuned for them coming up on the blog shortly.
Posted by defgav at 3:05 PM