Battle of the Boxes ('16 High Numbers vs '13 Hometown Heroes) 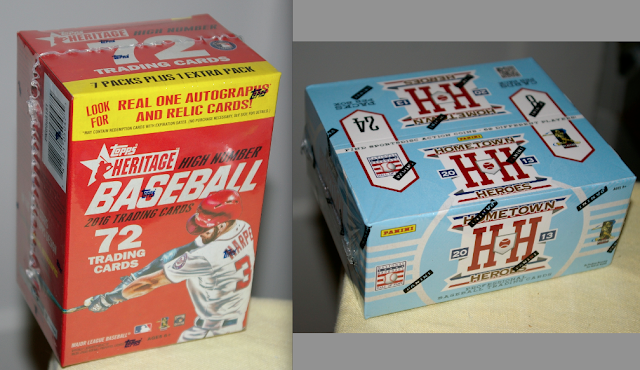 Time to wrap up the trio of posts breaking down my card show haul from last weekend. Along with the singles I dug out from bins, I also picked up a couple unopened boxes to rip: a 2016 Topps Heritage High Numbers blaster, and a box of 2013 Panini Hometown Heroes. Each ran me $15 from the same dealer.

Let's start with the latest & greatest: Heritage High Numbers. As far as base cards, there were two I was hoping to pull: Gavin Floyd's first card as a Blue Jay, and Padres fringe fan-favorite Jabari Blash.

Welp, I got the Blash. Still need the Floyd. Also got a Pujols/Trout and Neshek, but that's it for guys I collect. Pretty weak, but then again I suppose High Numbers isn't really about packing in starpower.

Other notable pulls, a /999 Chrome parallel of Jameson Taillon and a couple SPs. 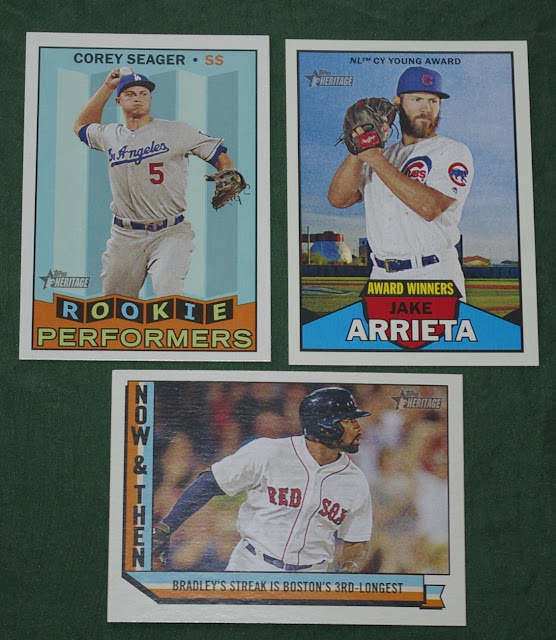 Inserts. I'll probably hang onto the Seager, but the other 2 are available to the first of my bountiful Cubs and Sox trader-buddies who call dibs. 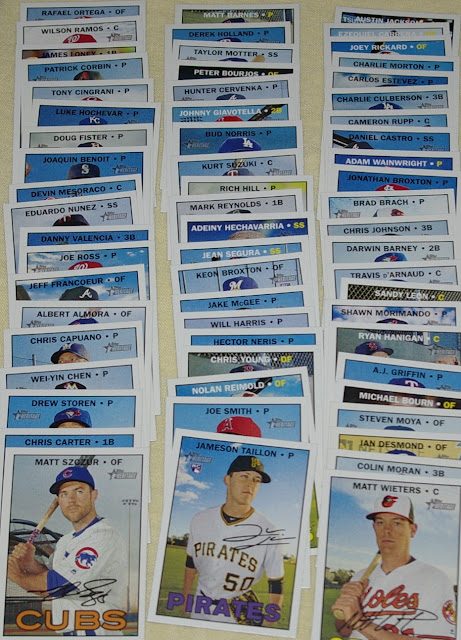 I don't think I pulled any gimmicky parallels.. such as fake errors, photo variations, gum stains, red back, or flipped stock (glossy back). Anyways, these are pretty much all available for trade, so let me know if you need any of them.

Next up is the 2013 Hometown Heroes box. The product seemed to be a hit on the cardsphere, with even collectors who normally don't dig logo-less Panini admitting it's a pretty fun set. It's chockful of fan favorites, both big names and lesser-remembered guys from yesteryear, plus some current players to make it feel a little more relevant. It's got a retro design, reminiscent of 1965 Topps, plus a decent price point, too. But for whatever reason, it was a one-and-done product. I haven't previously ripped any of it myself, but have gotten a few cards in trades here and there. 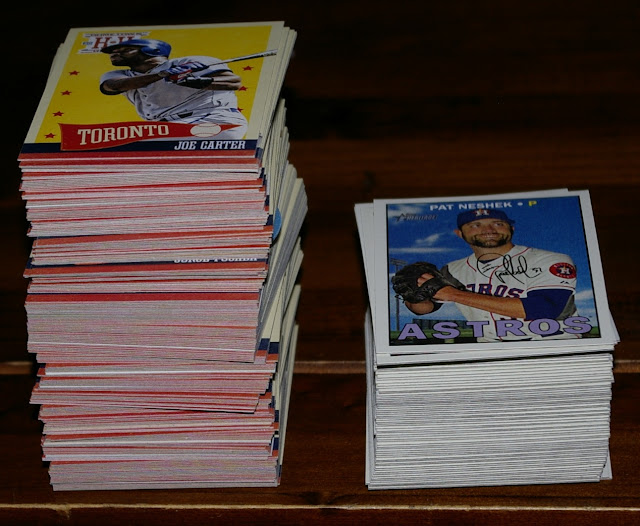 Well, as far as quantity, the $15 box on the left definitely comes out on top. Both sets are on similar, vintage-style stock. 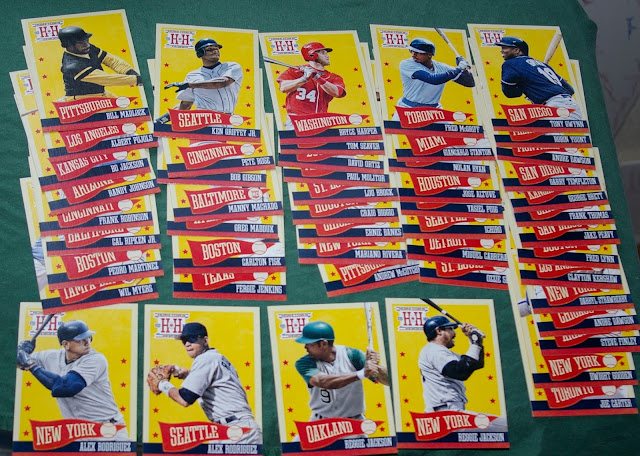 In contrast to the meager PC additions High Numbers had for me, Hometown Heroes delivers with dozens of cards of guys I collect. As you see at the bottom, some guys even have a couple different cards. I only got one SP, though, #300 Andre Dawson. 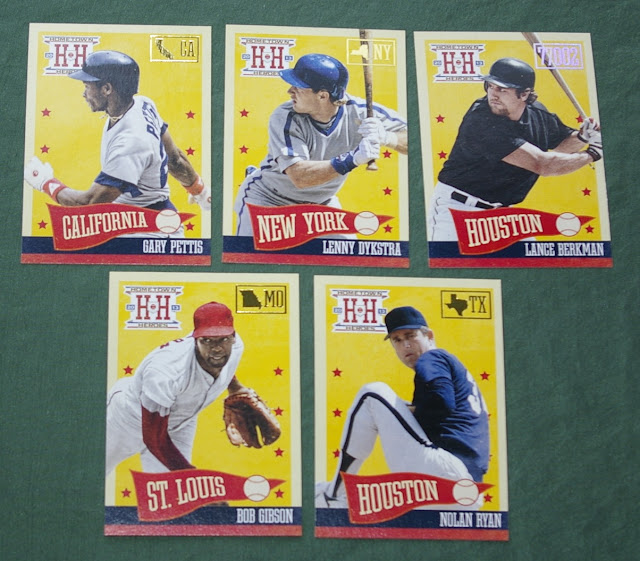 Some foil stamp parallels, with four states and one zip code. I'm hanging onto the Gibson and Ryan, but the other 3 are available for trade. 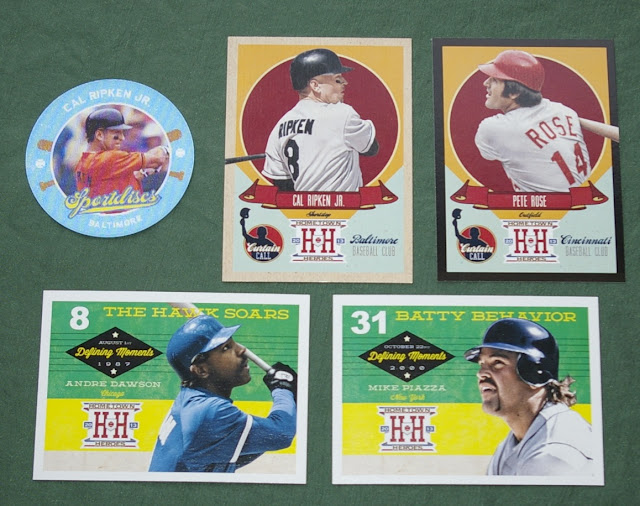 Some insert keepers for me. 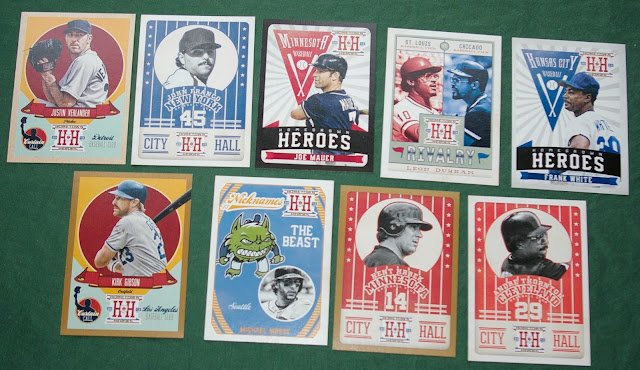 And some inserts that are available for trade. I believe the gold and black borders are somewhat scarcer parallels, though I didn't pull any serial numbered cards. 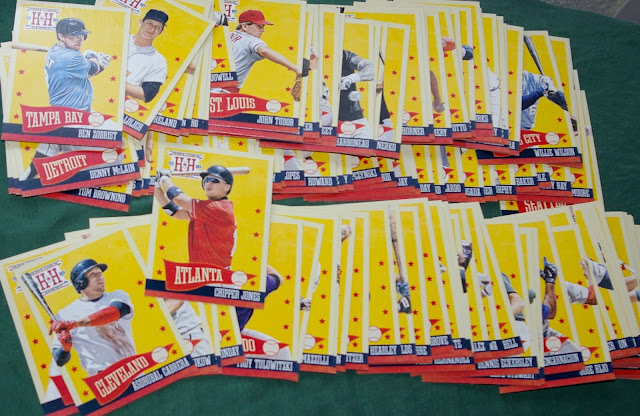 If anybody's working on this set, I've got plenty of base cards available. I'm almost tempted to collect 'em all, but don't think I'll go through with it. I will say though that in hindsight, I would have forgone the Heritage box and just bought a couple Hometown Heroes boxes instead. I might go for another box if the dealer still has them for $15 next show. 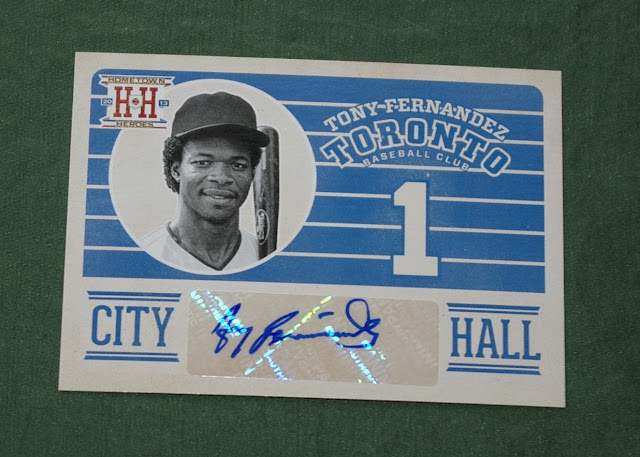 I even pulled a hit! While a Tony Fernandez auto isn't exactly a big-money card, I have fond memories of him from his time in San Diego when I was a kid, so I was happy with this pull.

So yeah, a couple decent boxes at a good price, with Hometown Heroes coming out victorious as far as most fun to rip.
Thanks for checking them out with me.
Posted by defgav at 2:44 PM