Do you think I Blew It with this box of 2014 Prizm Draft?

On more than one occasion, I've stated on this blog that I'm finished with the metallic chrome pajama nightmare that is Panini Prizm. But dang it, guaranteed autos, enough colored parallels to keep the break fresh, and a price that's hard to beat.. I keep coming back.

For just the retail price of a blaster, I threw a box of 2014 Panini Prizm Perennial Draft Picks in with my latest Dave & Adam's order.

Let's check out the highlights.. 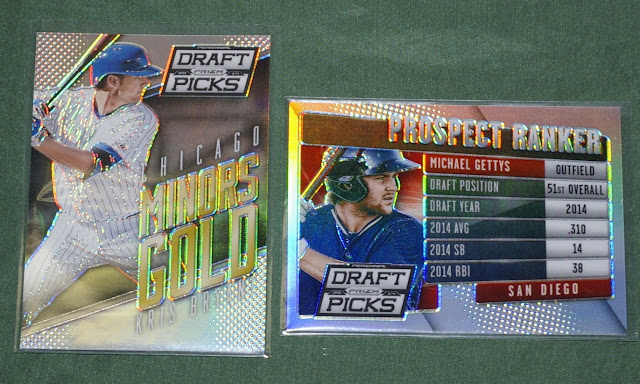 A couple nice cards for me here! The Minors Gold inserts fall one per box, and you definitely can't do better than to pull Mr. Kris Bryant.

I've previously busted 2 or 3 boxes of this product, and I don't recall getting a Prospect Ranker insert before. It's numbered /100 on the back, and as a bonus for me, it's a Padre. I heard Michael Gettys had a big home run in the Arizona Fall League yesterday. So that's pretty cool. 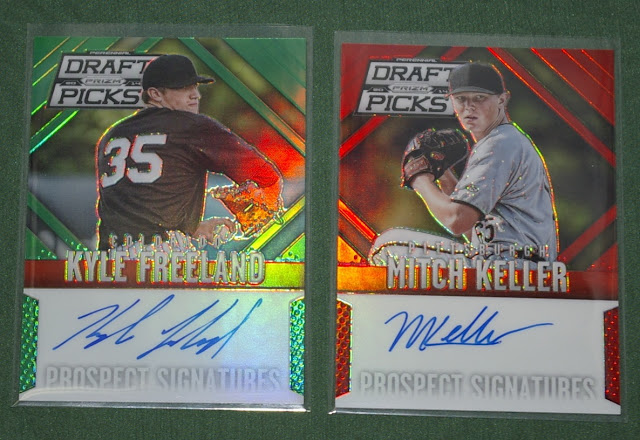 I pulled a couple auto parallels. The green parallels are #'d /35 on the back, and I know firsthand that they're very tough to come by, as the Gavin LaValley auto green parallel is the highest numbered card I'm currently missing in my LaValley supercollection. Imagine if I had pulled that instead of Kyle Freeland here?! That would have been an incredible pull for me. But alas..
I don't know much about Freeland, but he made it up to AAA this season with decent results, so it's likely he'll be pitching in Colorado before long. I feel like I've stockpiled a lot of quality Rockies cards since whenever the last time I traded with a Rockies collector was, so hit me up if you wanna work out a deal.

Pretty sure I pulled a Mitch Keller auto from this product in one of the earlier boxes I busted. But this /100 red parallel is nice, and Pirates hits are always welcomed around here for when I need to return fire toward Bob Walk. Keller had an excellent 2016 in A ball, striking out 138 and walking only 19 in 130.1 innings pitched. 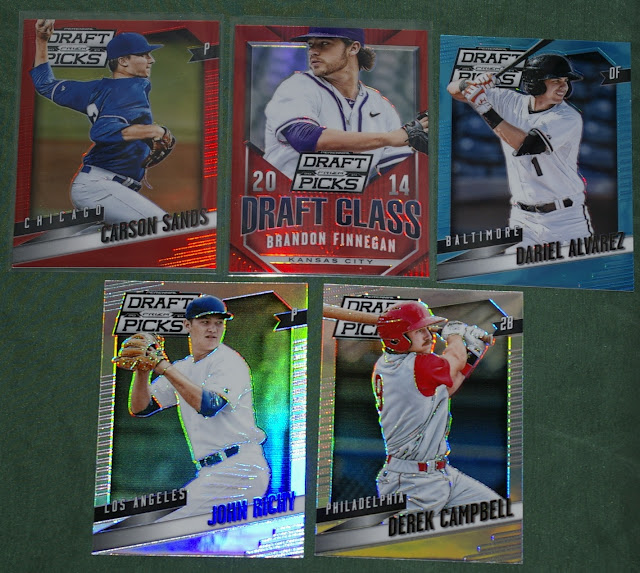 Here are some more parallels. Carson Sands had a rocky year in the minors (5.91 ERA), but I'm sure I can find a Cubs fan to take this /100 red refractor off my hands. Brandon Finnegan pitched ok on a bad Reds team this past season. Cuban signee Dariel Álvarez, here on a /199 blue refractor, has gotten a little taste of the majors, though has yet to stick in Baltimore. John Richy and Derek Campbell, teammates in Clearwater this past season, are regular non-numbered refractors (yes, I know Panini calls them prizms, but I don't care.) 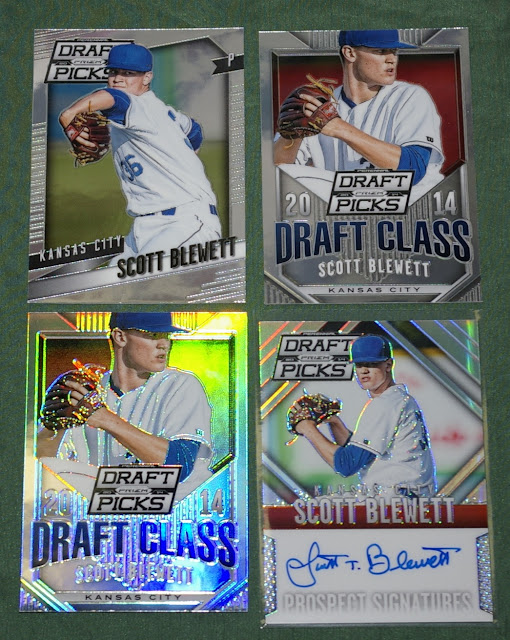 Scott Blewett hot box! Base card, Draft Class insert, Draft Class refractor, and autograph. Scott has the best looking signature of the box, I'll give him that. The 20-year-old had a respectable year in the Sally League, putting up a 4.31 ERA.

So there you have it. For 20 bucks, I got 3 on-card prospect autographs, plus a sweet Kris Bryant insert and a few more decent cards, so I'm considering this a good break.

I won't mind hanging onto these cards and hoping one or two of these kids becomes a star.. but that said, these are all available for trade except the two cards in the first photo. Plus plenty of base cards I didn't bother to post, if anybody's working on a team set. So just let me know if you'd like to work out a trade for anything. Thanks!
Posted by defgav at 12:36 PM