Bountiful Trades That Which Did Occur

Seems like September was a quiet month on the trade front for me for the most part, but in the past week or so I've gotten several nice trade packages in the mail. Let's check 'em out!

Judson from My Cardboard Habit leads us off:

That's the Burger King variation of Reggie Jackson's 1977 Topps card, a marked improvement over the airbrushed flagship version we're all more familiar with.

And speaking of Reggie PC needs, that's a gorgeous Reggie Sanders rookie. I remember when I was a kid, I held 1991 Leaf Gold Rookies in high esteem the equivalent of a superfractor today. I pulled the Von Popple and it was a vaunted centerpiece of my collection for quite a while. Took me a while, but glad to finally add the Sanders all these years later.

As for the Klesko, well I have a ton of his cards as a Brave and Padre, but it's nice to round out the PC with cards of him from the brief stint in San Francisco at the end of this career. 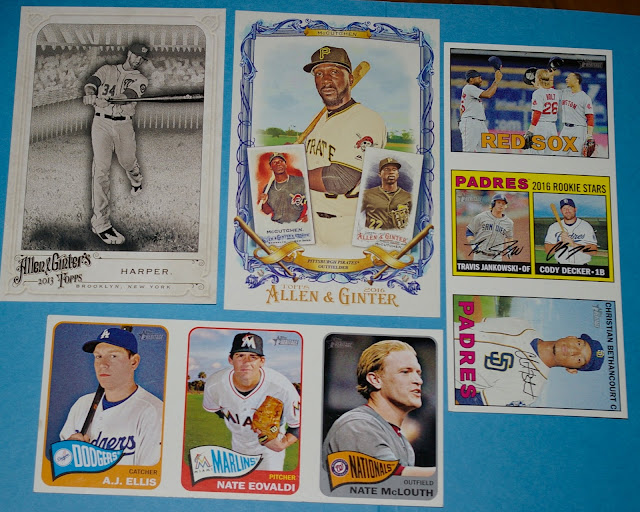 Oversized stuff like this can be awkward to store, but neat to add to the ol' collection. The Ginter box toppers of Harper and McCutchen are pretty sweet. The '16 Heritage panel is right up the alley for a guy like me who's a Padres fan and also has some Red Sox sympathies. It's the only thing from this package I was expecting. When Judson first offered up the panel a few months back, it was the Mookie Betts appearance that most interested me, though since then Travis Jankowski has become a guy I kinda collect too. I heard Christian Bethancourt might be used as a triple threat next year: catcher, outfielder, and pitcher! That would be pretty cool if a guy got regular playing time at all those positions in the majors. We'll see if it shakes out.

Big thanks for the cards, Judson! Glad we good! Best of luck to your Rangers this postseason.

(Funny enough, the other 3 trading partners in this post are all Cubs fans, so good luck to them too!)

Next up is my first trade with Trevor P. from Bump and Run Football Card Blog: 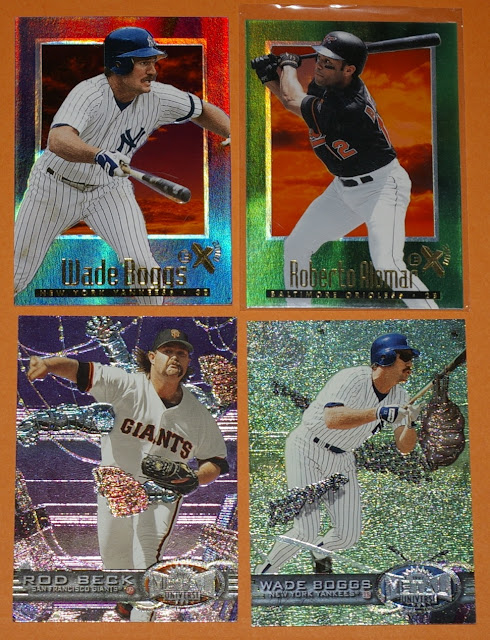 Some awesome gimmicky cards from a simpler time! A pair of Boggs, and short-time Padres favorites Robby Alomar and Roddy Beck. 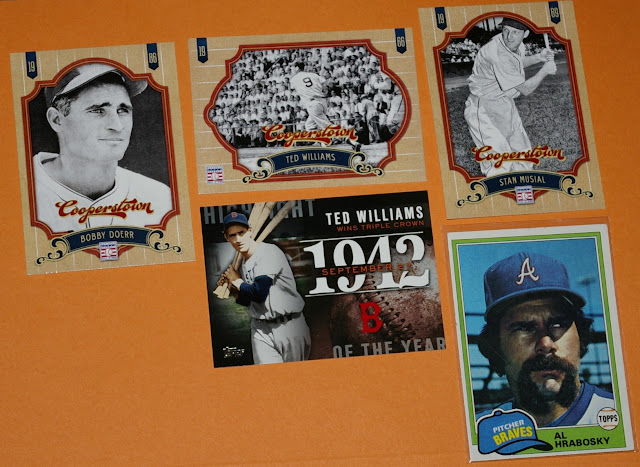 Some old-timers I collect. I botched at tetrising the cards for this picture; should have put the 2 horizontal cards together in a row, and the 3 vertical cards in another row. Tetrising is in fact a valid word according to my spellchecker.. go figure! 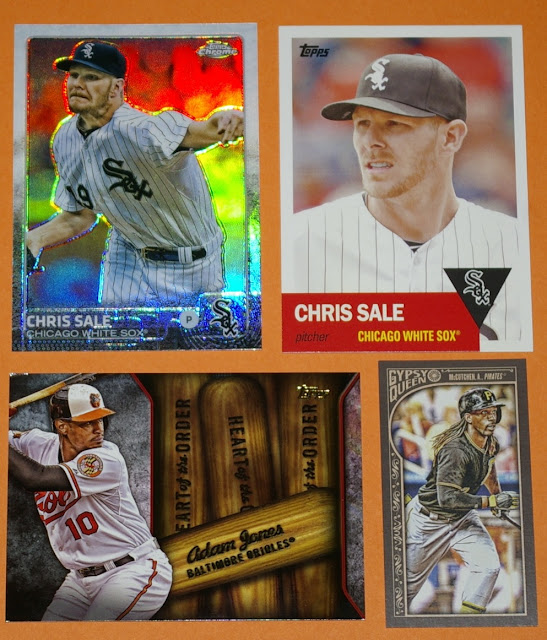 Ah! Now there's a properly tetrised photo! Tetrised is not a valid word according to my spellchecker. So, tetrising? Yes. Tetrised? No. Ok, got it. Anyways, these are cards of active guys I collect, featuring a couple Sales, including a sweet Chrome refractor, plus Adam Jones with a bat barrel poking out of his butt (ouch!), and a McCutchen GQ mini. 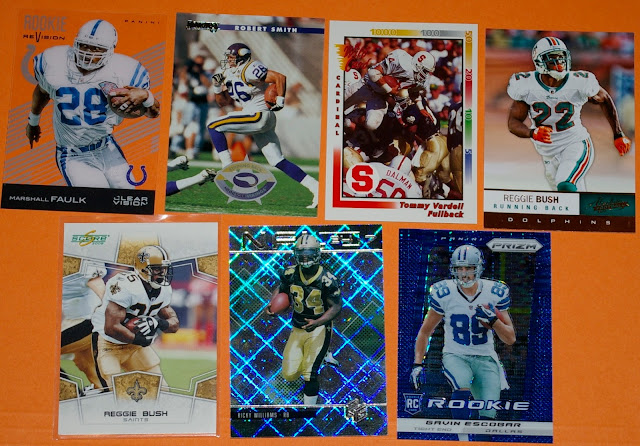 I think Trevor's mainly a football guy, so it's no surprise he was able to hit a few of my football interests, possibly the best well-rounded football lot I've ever gotten in a trade, as far as guys I collect.
Marshall Faulk - SDSU legend.
Robert Smith - Honestly like him just from his brief MST3K appearance.
Tommy Vardell - Guy from Granite!
Reggie Bush - fellow East County San Diego boy.
Ricky Williams - I ran track against him back in the day (ok, not sure if I specifically ever had a race against him, but we were both around city invitationals at the same time, so maybe? Some of my track teammates did race against him.)
Gavin Escobar - We're both named Gavin and both went to SDSU.

Other sports were included too, with this nifty trio of cards. Mutombo is a fun dude to collect. I went to high school with Jimmie Johnson. And Gretzky is one of my very few hockey PCs.

Awesome stuff, Trevor! Thanks a lot. I'll get a return out to you soon.

Dimebox Nick is always good for a stuffed PWE to hit the spot. 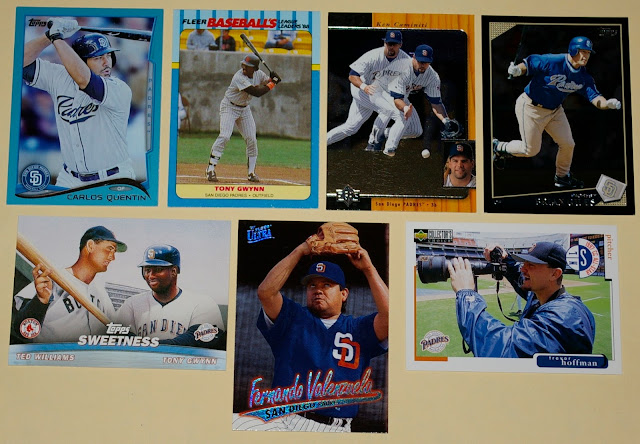 Nice lot of Padres from the past. 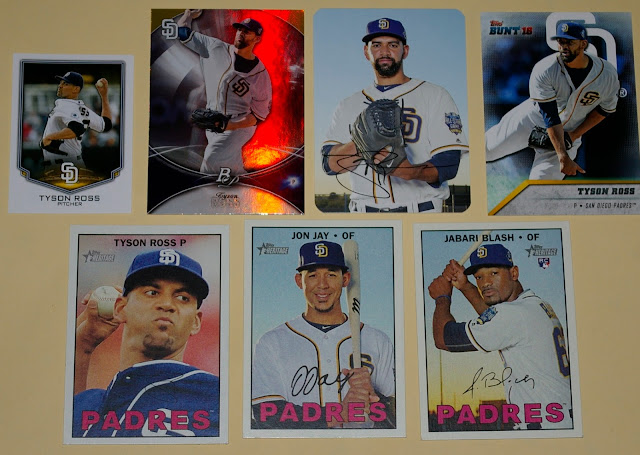 And a bunch of current Padres, with emphasis on Tyson Ross. I hope he can bounce back healthy for next season. 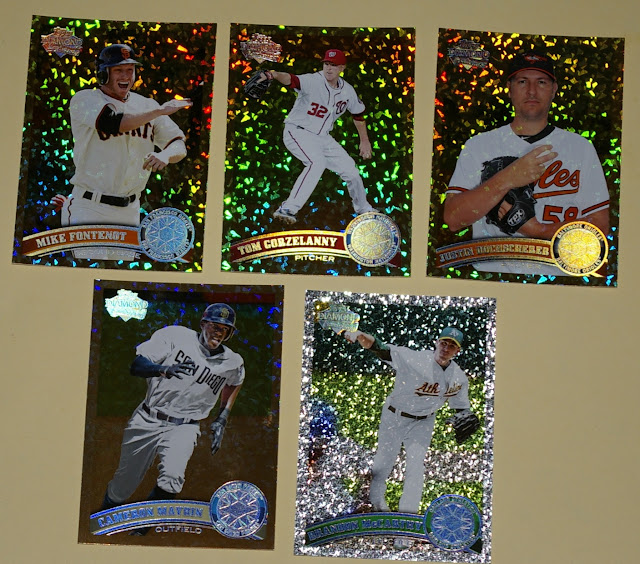 Are you guys sick of seeing 2011 Topps parallels on my blog yet? Well, this little lot brings me to 19% complete. It's a fun frankenset to put together, but still a long way to go. 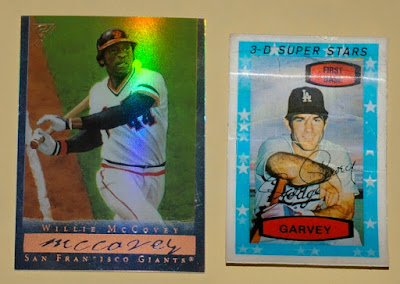 And here's a pair of Padres legends pictured in their less-familiar uniforms (I kid).

Great stuff as always.. Thanks, Nick! I dropped a PWE in the mail to you a couple days ago.

Last up is a surprise PWE from Tony Burbs: 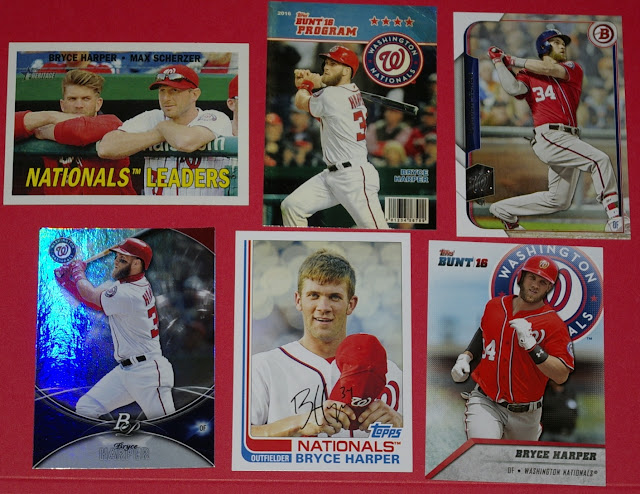 Nice boost to the Bryce Harper PC. Gotta love those Bunt Program inserts.. happy to land this one. 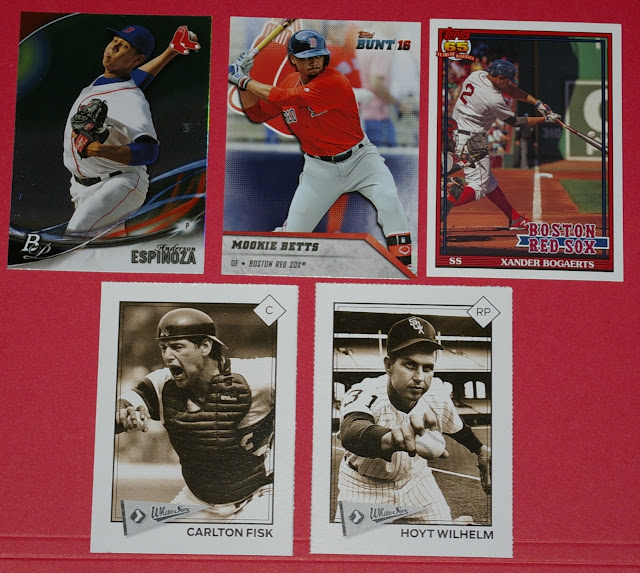 And a bunch of Sox, both of the Red and White variety. Very nice! I had eyes on that Hoyt Wilhelm newspaper giveaway from a few weeks back, so it was a very nice surprise to see it pop up.

Speaking of socks.. Can I talk about socks for a moment? I pretty much only wear grey socks. White socks are too bright and can be distracting to an outfit. Black socks seem to be too hot and get sweaty easily. Grey socks are a great middle ground! Plus, if you're a household who divides laundry between whites and darks, well, grey socks can go in either load, no problem. Grey (or "gray" if you prefer, though I favor the old-school "e" spelling) socks are clearly superior footunderwear, though despite this, they don't seem to be widely accepted. When it's time for me to buy new socks, I have to go online because basic grey socks aren't typically available in stores. This just seems wrong. Please consider converting to being a grey sock wearer and thereby helping make it easier for me to buy socks. We must rise up! Grey socks are the best way to go!
Ok, that's enough rambling about socks.

Thanks, Mr. Burbs, for the excellent cards! Hopefully I can scrape up enough Cubbies to get a sufficient return out to you shortly.

Thanks again to all these trader-buddies and thanks to you for reading. One more recent card package I need to get to, a big box from John Miller, but I think it'll need its own post, as it is not family-friendly. (Anybody know if Blogger allows pictures of naked ladies? Probably not, huh. I might have to do some censorship.)
Posted by defgav at 3:47 PM