This post is somewhat not safe for work, just to warn you right off the bat. If you're the kind of virtuous person who shields your eyes from nudity, or if you're reading this in a setting with co-workers or family around who might be offended by that kind of stuff, please accept my invitation to navigate away to another website. Howbout some silly Bad Lip Reading?

And like with any "girlie card" post, I feel obligated to say that I have nothing but the highest respect for women. I was raised by an amazing single mother, who worked full-time and was still everything a son could hope for. Most of my best bosses have been women. My wife is an awesome lady who got her MBA this year and I'm in constant awe of all that she does.

I'm also a sucker for pretty girls and make no apologies of my healthy, respectful appreciation for attractive women, especially those with large breasts. That's just how God made me and I can't deny who I am. Thank you.

With all that out of the way... A few weeks ago Johnny's Trading Spot had a post with a bunch of non-sports cards and mentioned something about also picking up some good "adult" cards which he wasn't at liberty to post on his blog due to their graphic nature. I (after a couple drinks) commented that he should email me those forbidden scans, as I was interested in seeing what he got.

John kindly obliged and emailed me scans of some impressive cards signed by the featured subjects. I was particularly impressed by the Christy Canyon and Victoria Paris autos, a couple of my favorite classic VHS vixens. John also offered to hook me up if I wanted to become the unofficial #supertrader for adult cards. I thanked him for his efforts and stated he could feel free to throw in a couple such cards whenever he sends me baseball cards, but I did NOT want to be a naked lady supertrader. Well, that Johnny, he is not afraid to bomb his trader-buddies with a big lot of cards. When I got his Priority Mail Medium Flat-Rate Box a couple weeks later I was worried it might be a bunch of junk Padres, as that's usually what I get when someone gives me a bulk lot of cards. But nope! Several hundred naked lady cards, plus a smattering of baseball cards to round things out.

Let's take a look at some highlights. 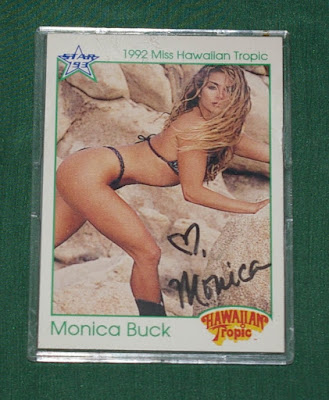 Let's start with an auto. This one is only PG rated (though be warned they get raunchier from here, though I've censored them somewhat). Never heard of Monica Buck. According to her very brief wikipedia entry, she appeared in Weekend at Bernie's II and was a spokesmodel on the show Star Search. 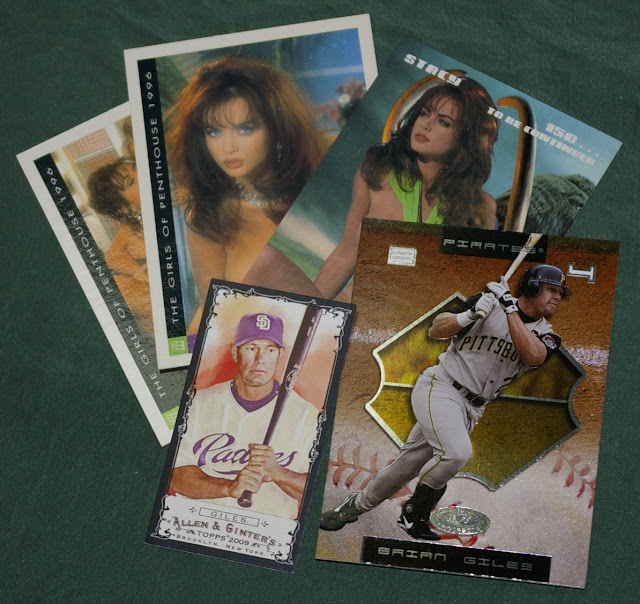 I really like Stacy Moran. I think I was first introduced to her when she was a guest on Howard Stern's show, which I used to watch on E! back in the day (mid 90s). She was just super cute and seemed like a sweetie. So yeah, I'll go ahead and be a Stacy Moran card collector and am happy to score these cards. Also here are a couple additions to my Brian Giles PC that John sent along. 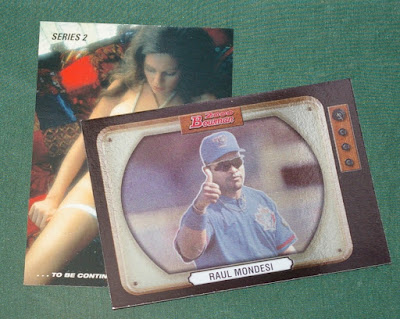 Time to get retro. Apparently Penthouse was around way back in 1975, here's a card with a photo from back then. Raul Mondesi, also throwing it back, gives a thumbsup to this enchanting young lady. 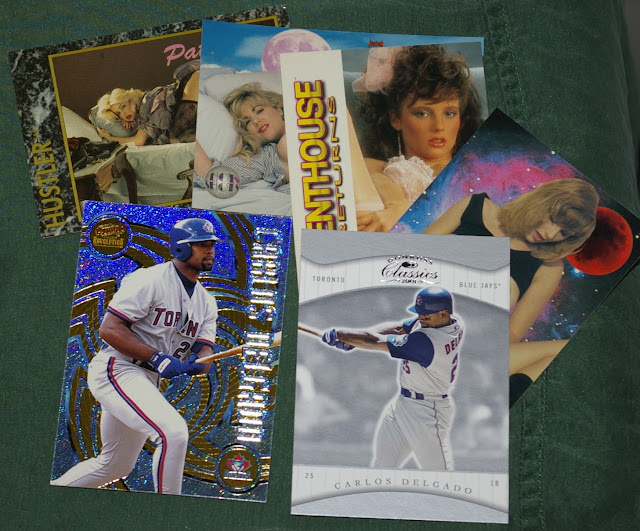 I've got a solid little Carlos Delgado PC-- probably not too far away from getting him into my Hundred Card Club-- and here are a couple fine looking additions to it. And speaking of fine looking... er, here are a few pretty girls that caught my eye. 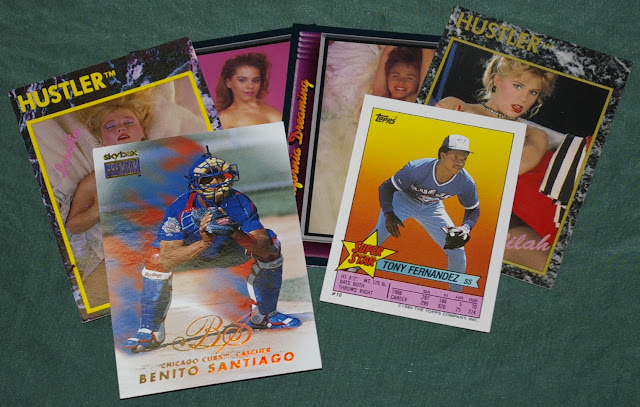 Benito Santiago and Tony Frenandez.. a couple guys I fondly remember as Padres, pictured here as Blue Jays. For some reason, John sent me a bunch of Blue Jays cards.. Whoo-KAAAY! That's cool. Also here are a few more pretty girls showing off what their mamas gave 'em. 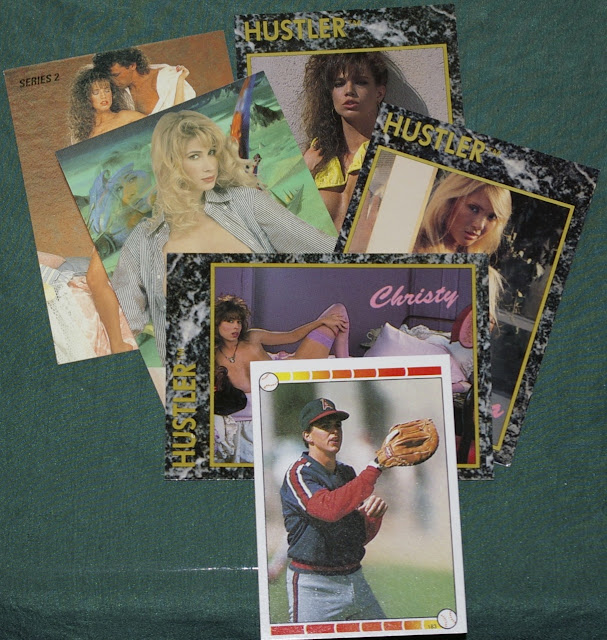 On the other side of the above Tony Fernandez sticker (by the way, Topps should really revisit this set for an Archives insert!) was another former Padre, Wally Joyner. As a Mormon, Brother Joyner probably wouldn't be thrilled about being used to cover up dirty parts of adult film stars. Sorry, Wally. I've admired the work of these particular 80s ladies since I was a kid stealing dirty mags and VHS tapes from my best friend's dad (sorry, Doug, Sr!). I guess it's nice to get them represented on cardboard in my collection.

So those few cards I've shown are the keepers for me. But there are hundreds more that I would like to re-home. 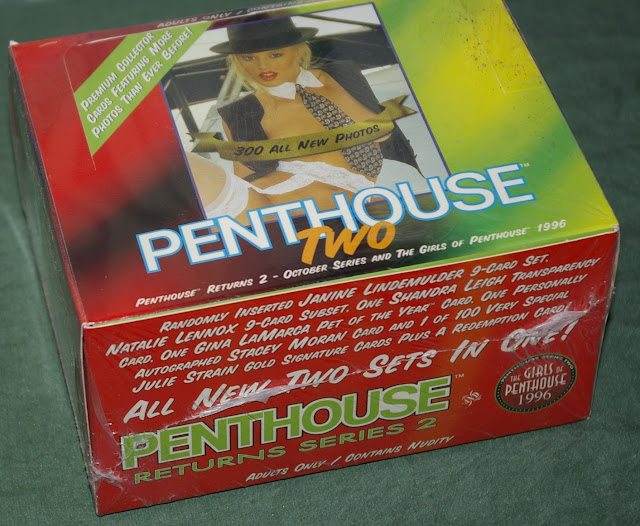 Check it out.. an unopened box! It teases me with the potential of pulling an autograph of my aforementioned sweetheart, Stacy Moran, but I'll bet it's at needle-in-the-haystack odds, so I'm hardly motivated to bust this box. Anybody want it? (If you pull a Stacy auto, you gotta give it to me!) 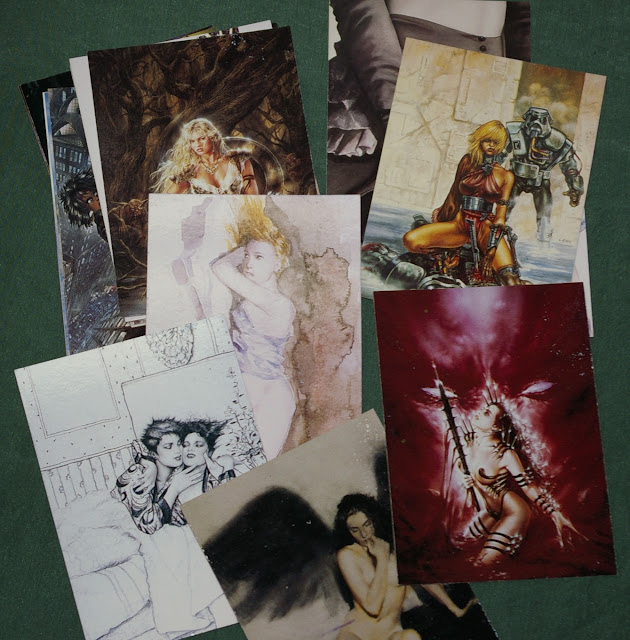 Here are some cool arty cards, I believe from a Heavy Metal branded set. Anybody into this stuff? Let me know about a trade. 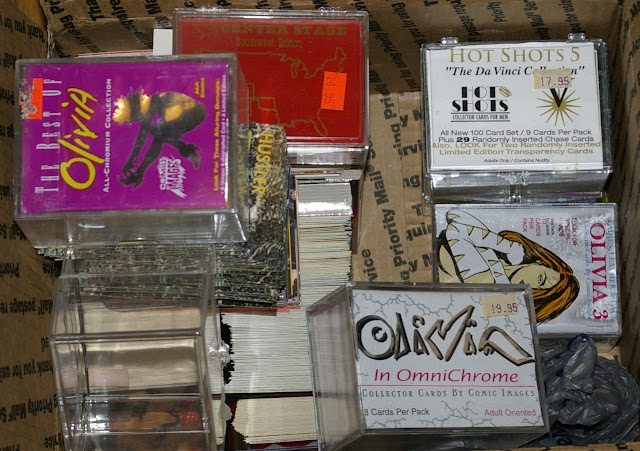 And I want to wrap up this post, but yeah, there are probably a couple thousand more cards I haven't shown here. Many complete and near-complete sets. (I almost feel bad about breaking up some of these sets picking out cards I like.. but only almost.)

Hmm, well.. Thanks for the cards, John! He sent along a list of customs he'd like me to whip up for him in exchange for these cards of pretty ladies. Yeah, I could probably help you out there, John.. Give me a few weeks. Though, dang, man! This package was crazy. Definitely a trade I'll never forget!

While I've picked out several keepers featured in this post, and no offense to John, I would really love to get rid of the bulk of these cards (after all, I'm mainly a player collector, not a set collector, and that applies to girlie cards as well!) And unfortunately, these aren't the kind of thing you can just throw in as bonus cards here and there, as I wouldn't want to offend anyone or put somebody in an awkward situation at home.

So can anybody help me out? Do you want some girlie cards? Mostly Penthouse and Hustler and that type of stuff. I'd be happy to part with cards for the price of postage (or the equivalent of baseball cards fitting in my wantlist). If you're interested in adult cards-- either a big lot or just a couple for kicks thrown in with a PWE-- please let me know. You can comment on this post, or if you'd like to be discreet about it, drop me an email and it'll be just between you and me.

But yeah, please! Help me out here. Lots of naked lady cards to get rid of. I don't want to be the naked lady #supertrader and don't want to just throw them away, so hopefully a few of you readers will valiantly take some of these cards of pretty girls off my hands!

Thanks for stopping by. Have a great weekend.
Posted by defgav at 10:57 PM