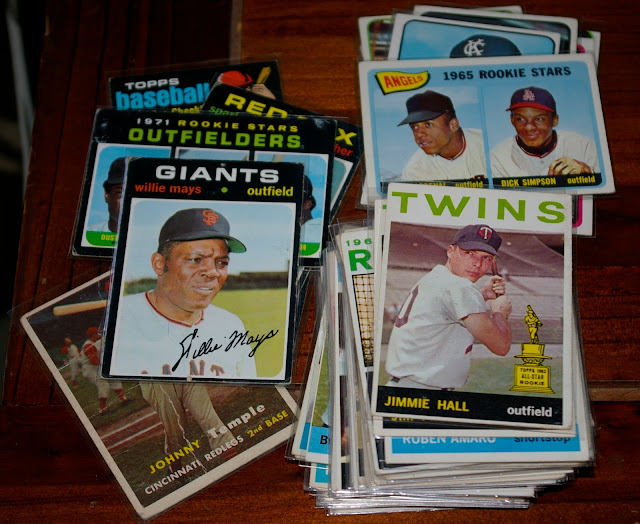 Typically when I hit the monthly card show, I go in simply looking for any cool cards / good deals that would fit under the wide umbrella that is my collection. But at last weekend's card show, I was on a specific mission to do some damage to my vintage set needs. Armed with a fresh needs printout, I spent some quality time digging through the 25¢ and 50¢ boxes of a certain vintage-specializing dealer. I think his name's Lyle. 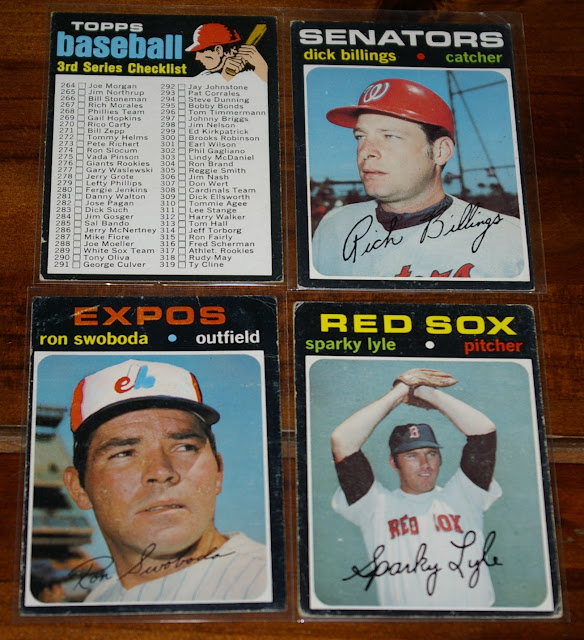 That checklist wasn't a need, but it's hard for me to pass up unmarked vintage checklists.. it's likely an upgrade for me. Dick Billings sounds like a subdepartment of Accounts Receivable, and a career path I would not be interested in. The Swoboda looks like the corners have been touched up with black marker, but whatever. I was excited to come across the Sparky Lyle high number for cheap. (I'll get to the other pair of 71s I picked up-- not from the discount bins-- later in the post.)

With 1971 Topps, I'm now at 93% complete in-hand, and 94% complete if you factor in a handful of cards sitting in my COMC inventory, which I'm patiently trying to wait to have shipped until Black Friday weekend to take advantage of free shipping, assuming they keep with the tradition of offering that perk. I used the site to pick off the few cards I needed under #600, so I could save time at the card show by knowing if the card number was under 600, I didn't need it. But yeah, factoring in those cards waiting for me, I've now checked off the first 5 series of 1971, with only the elusive sixth/final series still having holes. Sparky Anderson and Luis Aparicio are among the bigger names on my list, though it's mostly just commons left for me, though high numbers can still be expensive even for no-name guys.

Let's move on to 1965 now. Lyle's discount boxes aren't really organized at all. As I thumbed through them, I made stacks of the sets I'm working on, and then checked them against my needs at the end. I was surprised at how much of the 65s I already had. I came home with 10 cards I needed from the set. 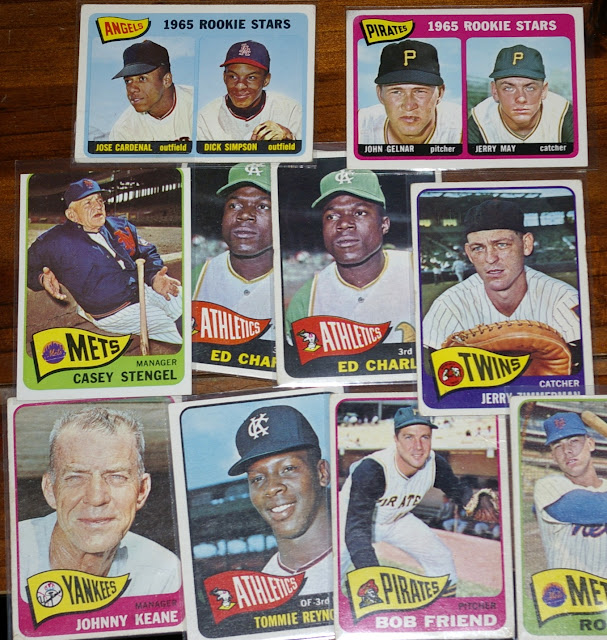 The Jose Cardenal RC is the highlight, even with a rough lower left corner. The Casey Stengel was a great find too, though it's miscut enough to the point that I'd like to upgrade it someday if possible. Bob Friend and Ron Hunt are a couple other names that ring a bell for me.
Crap; I see I accidentally bought two Ed Charles cards. Perhaps I should be better about checking off cards as I go.
These 9 cards take me to 69.5% complete with the set.

I came up with a fat stack of 1964 needs, with close to 50 cards. Inadvertently grabbed 3 dupes, grr.. again, I need to be better about marking off what's already in my stack. 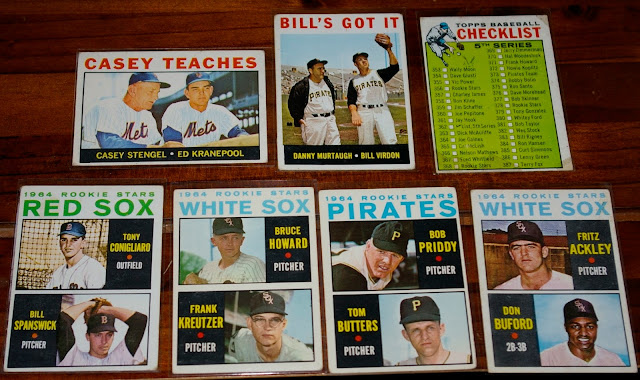 The Old Perfessor makes another appearance. Another unmarked checklist, though this one has some dirty corners, so it's not perfect. And a nice crop of dual rookies, highlighted by Tony Conigliaro. 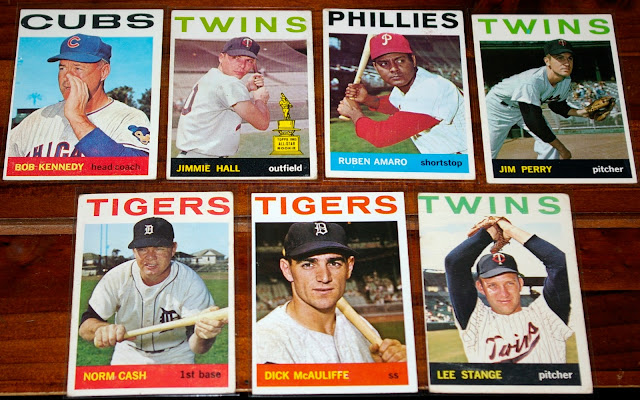 And here are a few more of the other notable 64s I grabbed, including a holler card (gotta love old photos of managers hollering), an All-Star Rookie trophy, a pair of stalwarts of Detroit's infield.
This haul got me over the one-third complete mark, sitting at almost 36% complete now. I can tell the high numbers will be a pain for me, seeing as I only have 3 cards from the set's final 100 cards, with one of them being the Lee Stange up there. 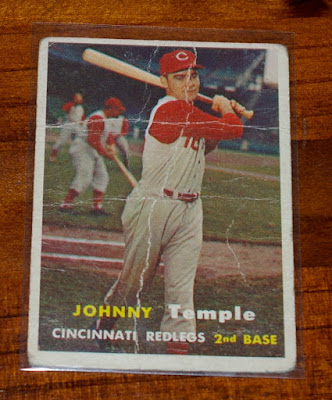 There were slim pickins for the other vintage set I had an eye out for, with only one sorry 1957 Topps card popping up in the discount bins, this creased-to-heck Redleg. I grabbed it anyways. I'm not going to be picky about condition for this setbuild. All are welcomed if the price is right.

This dealer also had a dollar box which I expected to have more desirable cards (high numbers, bigger names, etc), but from a curious quick flip through, the contents seemed to mirror that of the cheaper boxes, so I just left it as it was about time to me to head home. But I might go through it next show to see if there's any high numbers in there I need. He also has some sorted vintage boxes, but I don't think he prices those cards as competitively, rather knocking a percentage off book value. Still though, I might take a look and see if I can make a deal. Not to put myself under the gun, but I'd love to pick up the final 44 cards I need to complete 1971 Topps by the end of the year. 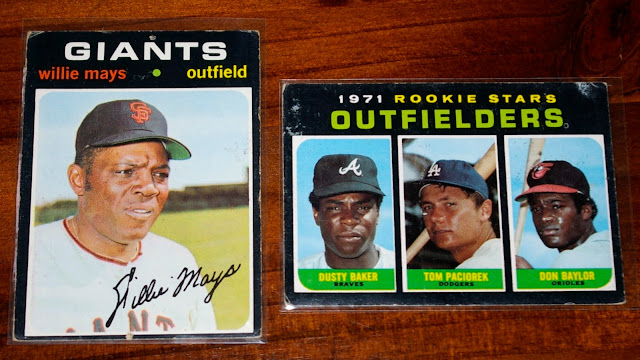 Anyways, yeah, Lyle gave me a good deal with what I pulled out of the discount bins, and I countered with a couple bucks less because that's all I had left in my pocket allocated for cards, which he kindly agreed to. I still had a $20 of emergency/walking-around money in my wallet, though. As I was walking away, I asked if he happened to have a 1971 Mays among his stacks of top loaders under glass. He said maybe, but if so, it probably wasn't in great condition. That was fine with me and we each took a stack of 71s to flip through. I found the Mays and kept going, soon coming to the Dusty Baylor (as I'm calling it). They were both in off-condition (Mays has a couple pinholes), but he let me have the pair for $15 combined, which while not a steal, is probably the best I can hope for with these cards. They were the two biggest cards left that I needed, so it was nice to get them out of the way. I had gone after a few copies of the Mays on eBay in the past month, coming up short each time. And the Dusty Baker, Tom "Wimpy" Paciorek, and Don Baylor grouping is likely the set's top rookie card (at least right up there with the Blyleven and Garvey cards), made even more in demand due to being a high number. It's a rare instance of a 3-player RC where each guy went on to make a name for himself with a long career in the game.

So yeah, good vintage haul from the card show this month. As always, my wantlists are linked on the right sidebar, so if you can help with needs from these sets, please get in touch.
Thanks for reading!
Posted by defgav at 12:42 PM