Many generous trades have come in over the past week.. so many that my usual "trade roundup" would be a bit too stuffed. So here's just the PWEs I've gotten recently. (The full packages will hopefully follow in tomorrow's post.)

The envelope up first is from Sport Lad over at Sport Card Collectors. Ok, maybe he doesn't really go by the name Sport Lad, but it's an affectionate nickname I like calling him by (originating from the fact he doesn't yet have enough letter cards to spell his blog's name in a similar fashion to my header, though he can spell "Sport Lad" and so I suggested he just change the name to that and be done with the project. LOL) 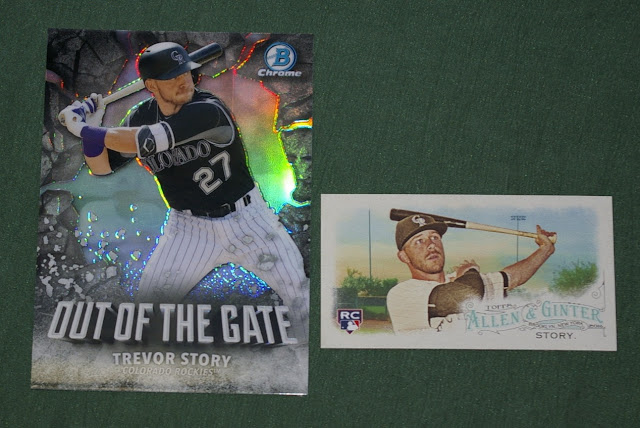 Leading off with a couple sweet Trevor Story cards! I'm excited to see what kind of year Story comes back with in 2017. Will he continue to mash or be back down to earth? 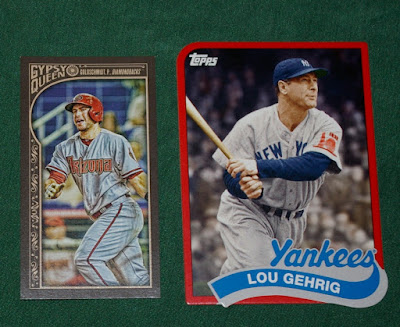 Nice minis of Goldschmidt and Gehrig. 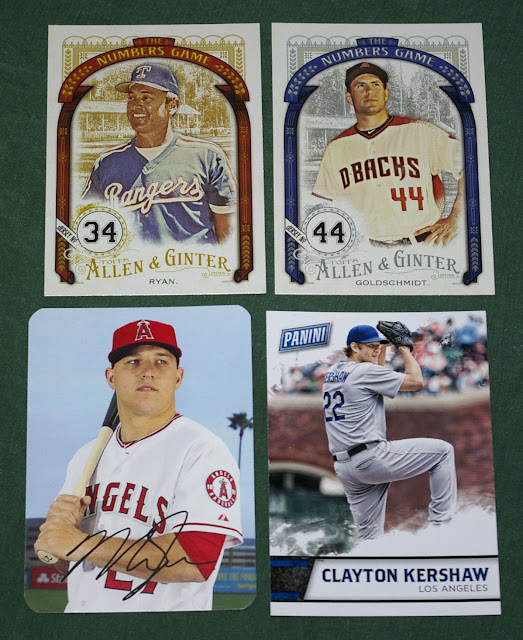 More dudes I collect. Love those Archives Supers. Don't recall seeing anything from that Panini set before, though it's eerily similar to the 2016 Topps design thanks to the smokey corners. 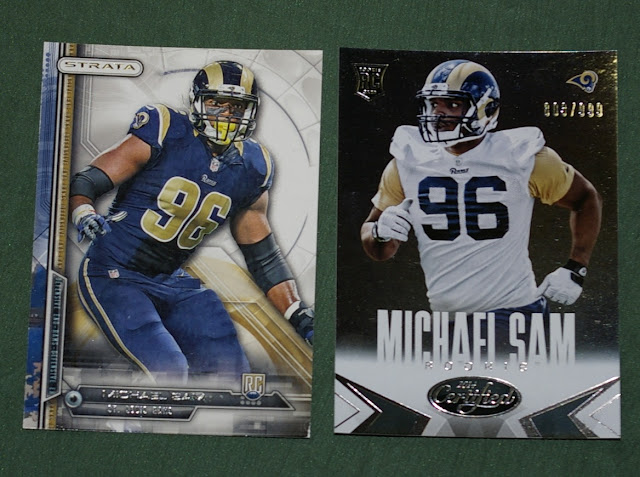 And a couple Michael Sam cards-- with a numbered one, even! He's got a ton of cards out there, though seems like he wasn't quite given a real chance to show what he could do in the NFL. He did get into a CFL game last year at least, though. Still good that he helped chip away at the perceived barrier to gay people playing pro sports.

Great stuff.. Thanks, Sport Lad! Glad to hear you like the return PWE I sent you, as well.

Next up is a wonderful 2-card punch from reader mr. haverkamp. He read my post about nearing the finish line with 1971 Topps and courageously offered up a couple pesky high-numbers he had available. Didn't even want anything in exchange! Awesome guy! 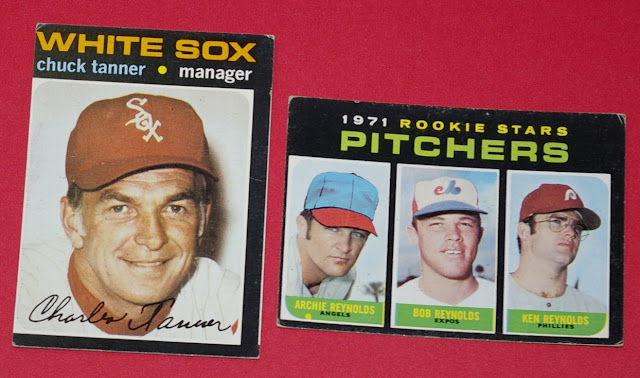 No one's going to rush out and get these graded, but they're just perfect for my set.

Archie, Bob, and Ken Reynolds.. As far as I know, there's no relation between the three men. I guess it was just Topps being cute? Or a huge coincidence?

These 2 cards plus an eBay win yesterday take me down to just 6 more needs to put this set to bed.

Big thanks, Jim! Just let me know if I can ever help you out with any cards to return the favor.

Next up is a cool little PWE from Bo Rosny. It's hard to keep up with him, as he's frequently finding cards to shoot over my way. 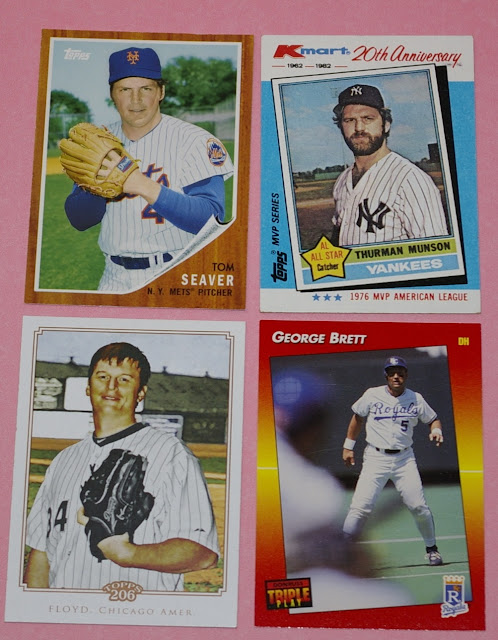 A few greats from yesteryear plus a Gavin Floyd I needed.

Ok, now this last one wasn't technically a PWE, but I met up with Padrographs Rod again at last weekend's card show, and he kindly handed me a PWE's worth of cards. 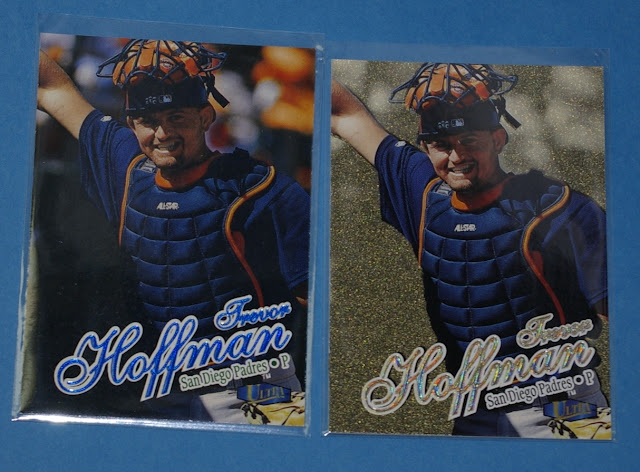 I had long been wanting this card of Trevor Hoffman donning the tools of ignorance. Rod did one better by also including the gold parallel. 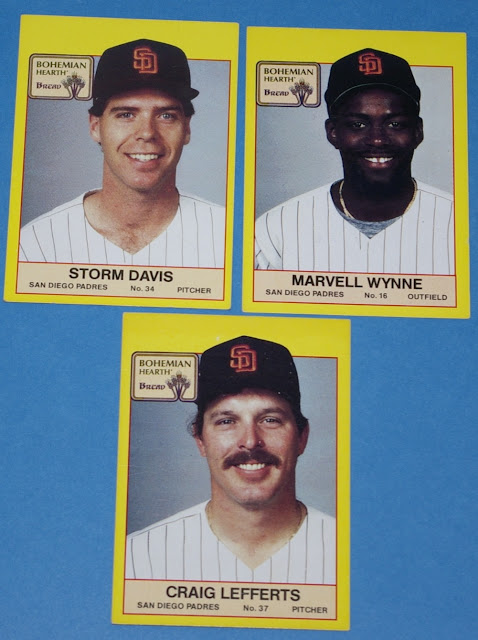 Speaking of gold... 1987 Bohemian Hearth: The lesser-known older cousin of 1991 Fleer, these regional oddballs came with loaves of bread, and I remember them being among the first baseball cards I ever owned as a kid, back before I really collected at all. So for sentimental reasons, I'd like to someday put the 22-card set together. Rod doubled what I had thanks to these three, taking me to 6 down with 16 left to go. 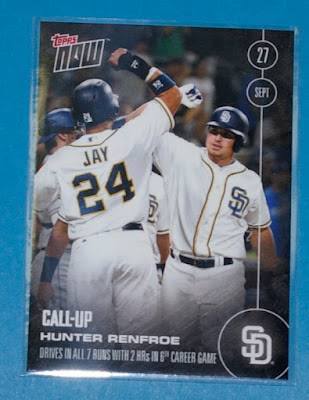 And we close with a big one! This is my third Topps Now card overall, but the first one that I didn't have to pony up money for.. always nice. This card commemorates a big game Hunter Renfroe had last month. It had a print run of 959, which I believe makes it the largest print-run of any Padres Topps Now card besides the other Hunter Renfroe card that came out the very next day (1st Ever to Hit HR Onto the Roof at Petco Park). Obviously Padres fans have high hopes for this kid.

Awesome! Thanks again, Rod. As always, just say the word if you need any Photoshop help and I'll be glad to lend a hand.

That's all the trades I'm showing off today, but here are a couple Bill Murray customs I whipped up last night just in time for the World Series kicking off tonight... 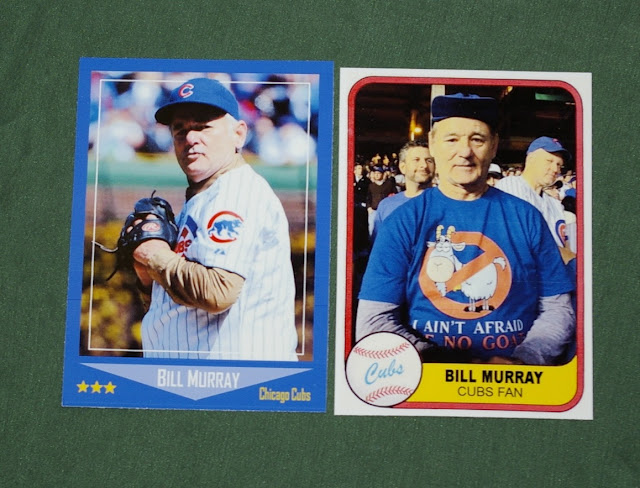 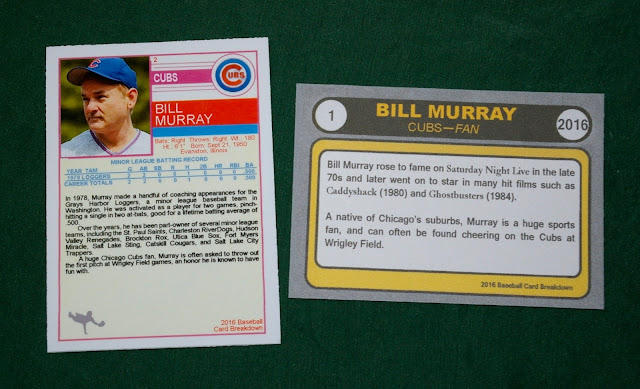 I'm excited for some big-stage baseball and seeing a decades-old championship drought be broken one way or the other! Go Baseball!
Posted by defgav at 4:00 PM