Last week a kindly reader emailed me offering help with my 2011 Topps parallel frankenset. Turns out Gabe had around 150 cards I could use. I'm always a bit wary of dealing with a stranger, but he seemed like a good guy, so we worked on hammering out a trade. Once he started dropping the dreaded term "book value", and how 2011 Topps parallels apparently have pretty decent BV.. well, our trade talks looked like they were going to break down. But we were able to regroup and shake on a smaller deal. Instead of the entire big lot from him, I just picked out a dozen cards I was especially interested in. So while my overall completion percentage didn't see much of an uptick, at least I checked off some good ones. 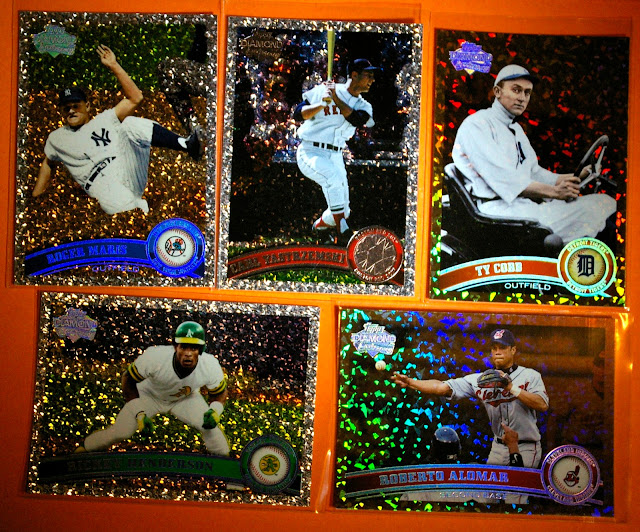 The Legend Variations are super cool, so the few Gabe had available were must-haves for me. Maris, Yaz, Cobb, Rickey, and Robby Alomar.. impressive group!

Some of the more notable RCs in the set: Blackmon, Kipnis, and Alex Cobb. Some lazy "refraction action" going on here.

And some other big names. Ok, Xavier Nady isn't really a big name, but he's a cool name, and a guy I collect (though I forgot he was ever a D-back). And I went ahead and got a couple Beltre cards since he's also a guy I collect. The /2011 gold parallel will go to the PC, since shiny cards take priority in the frankenset.

Big thanks for the trade, Gabe! If you ever feel like dumping the rest of those 2011 parallels, you know where to find me. :)

But wait-- more such cards came into my collection recently.. these one's hand-delivered!

Renowned cardblogger gcrl was in my neck of the woods on a business trip, and we had the opportunity to meet up for a few minutes to talk cards and do an in-person swap. That was pretty cool. Jim is just the second blogger I've met IRL (after Padrographs' Rod). He was nice enough to put together some 2011 parallels for me, and though he didn't have a chance to check them against my wantlist, I needed most of them.

And they call them the Diamond Dodgers. And Cognac Chisenhall RC and the Greatest Gavin. (I suppose I'm rooting for the Jays in the AL Wild Card game tonight. Floyd is out for the season with yet another injury, but it'd be nice if he finally got a ring.) 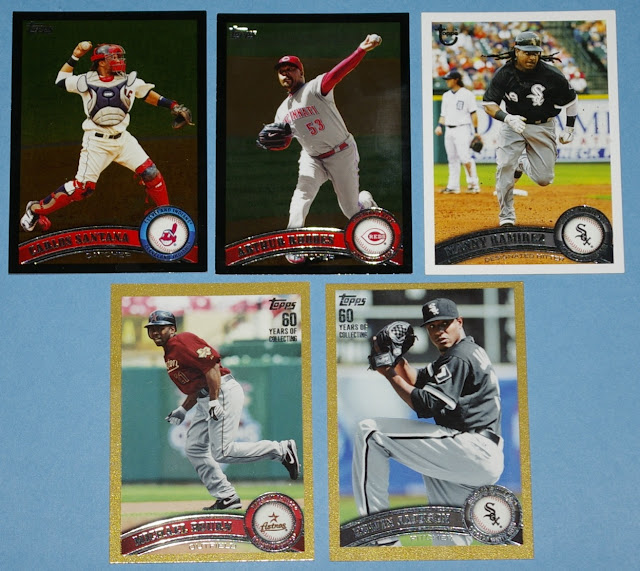 Giving your eyes a break from all the hypnotic shiny, here we have a couple "all-black" parallels (Walmart exclusive), a throwback (Target exclusive), and a couple golds.

Jim also handed off some files for a customs project I'm helping him with.

Very cool to put a face to the name. His latest blogging endeavor is called cards as i see them, and as usual, it's an enjoyable read.

Thanks for the cards, Jim!
Posted by defgav at 3:38 PM