Time for the weekly (or so) roundup of cards that have come into my collection by way of the cardsphere. It really is cool to step back and appreciate how my collection has grown by the generosity of this community. We're coming up on 4 years since I started this blog, and it was one of the best decisions I ever made. Lots of great folks!

Here's a great example of what I'm talking about... Matt at the Summer of '74 blog recently ran a contest giving away some stuff. The randomizer named Tony L. the winner, but he generously declined, having recently gotten a large card lot from Matt, and suggested I get the prize instead, being 2nd place on the randomized list. Nice! 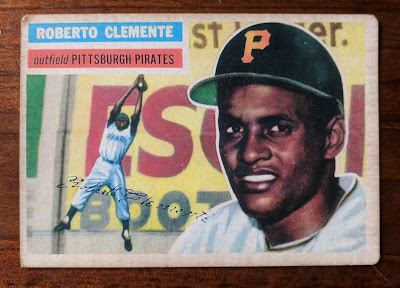 Before you get too excited: This is an unauthorized reprint of a 1956 Roberto Clemente. Looks very authentic, though in hand, the card stock gives it away, firm and glossy like a modern card. (I should clarify that Matt made it clear this wasn't a real card back when he kicked off the contest.) 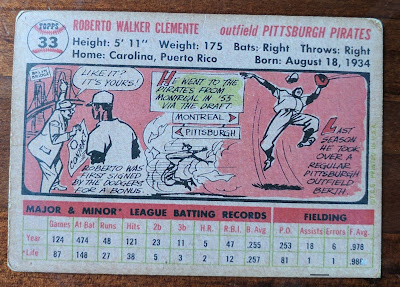 I've ranted about cards like these before.. How Topps gets on my ass over fun "cards that never were" customs, yet there are a ton of eBay sellers pumping out counterfeits and getting away with it by listing them as "reprints that aren't marked as reprint." (And of course that doesn't prevent another seller from forgetting to mention the reprint part, and trying to find a sucker.) At least this one has a little black line under the fielding stats that also helps give it away.. not sure if that was intentional on the creator's part.

Sorry if I'm sounding like a douche being critical of this part of a prize I won for free. It's just a sensitive area for me. I do think it's a neat item and will definitely give it a place in my Clemente PC (clearly marked as a fake on the top-loader, just so there's no confusion when my collection eventually changes hands). 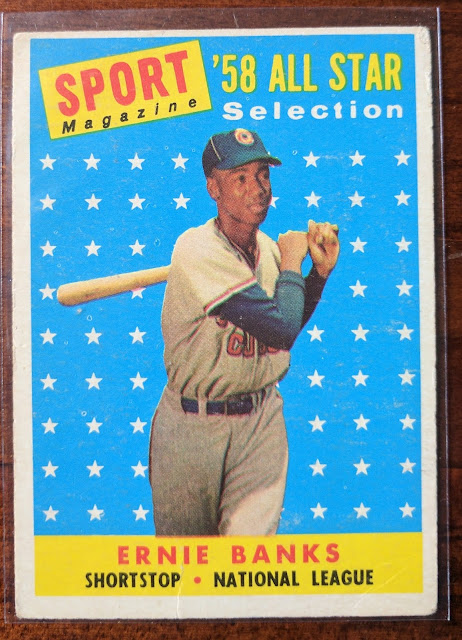 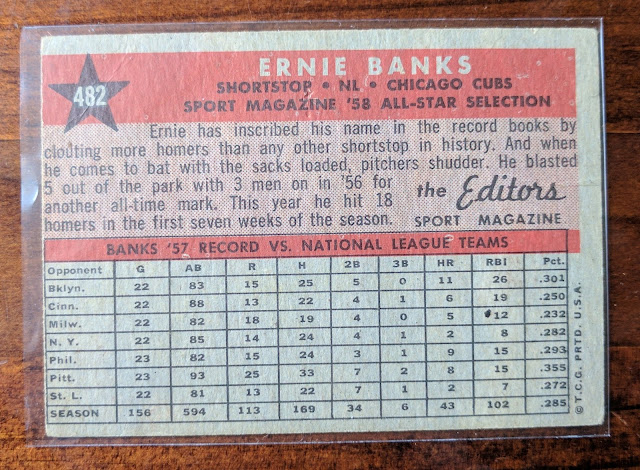 And three Pro Set cards. I ripped a few packs of these back in the day, and believe I still have that Emmitt Smith card. The Art Shell cards are new to me, however. And it's an error.. Notice how the last letter in "Hall of Fame" gets cut off? A corrected variation with smaller font is easier to find. 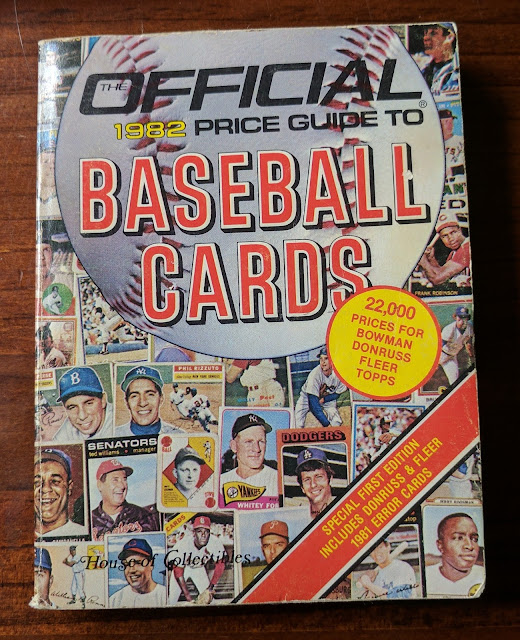 The prize package wraps up with a paperback price guide from 1982. 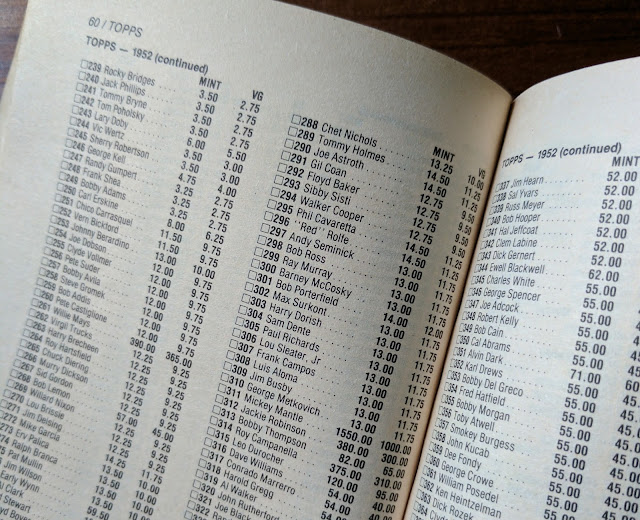 Pretty neat to flip through. Had to look up a '52 Mantle. Still a lot of money, but much cheaper than today, that's for sure.

Great stuff! Big thanks to Matt for the prize package! (and Tony L. for the assist!)

I've been having good luck with winning contests lately, and plan to balance things out with a big contest or two of my own coming up before too long.

Speaking of contests, Sport Card Collectors has switched up his usual randomized contests format into a season-long contest where you earn points by picking the winning teams in a few games that week. Unfortunately, I've been sucking pretty bad. But while I might not be likely to win any prizes there, at least SCC is still kinda enough to hook me up with a PWE once in a while. Here's the latest from him... 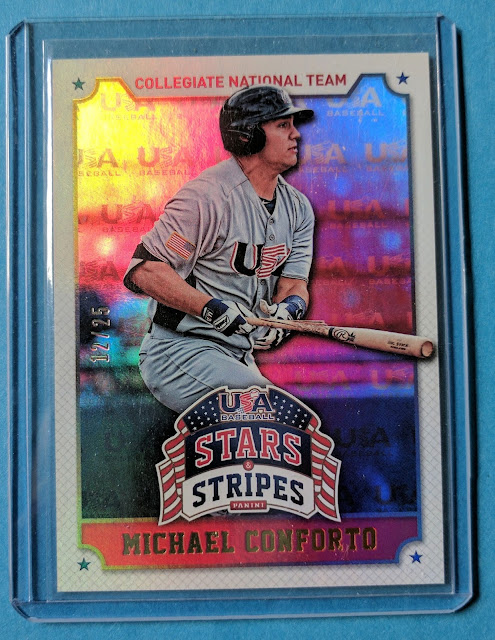 Awesome Michael Conforto parallel.. and it's a Christmas Card! I saw that SCC had landed this card in a big lot recently and was hoping he would be gracious enough to send it my way eventually. Conforto seems to be a pretty streaky hitter, but has been on fire of late. Drafting up this post was interrupted when we discovered an unknown dog in our backyard. Pretty crazy. She was trembling and very scared, with no collar on, but she seemed sweet (no barking or growling) and eventually I was able to get close enough to snap this photo and get a collar on her. We were able to get her into our dog's kennel while we tried to find her owners by putting out social media alerts about a found dog. After over a couple hours of no response, we figured we'd take her to a nearby vet to have them scan her for a microchip that could hopefully help identify her owner's contact info. Unfortunately, she freaked out when we tried to get her in the car and pulled out of the collar and ran off. We looked for her, but she was gone. I feel terrible about it. I guess all we can do now is hope she makes her way home safely, be it on her own or with the help of somebody else. She looks kind of like my dog Annie, making it even more close to home for us. Just breaks my heart we weren't able to help her. I really wish we could go back in time and get a "do-over" on the situation, this time being more careful about transporting her so she wouldn't get loose. That's gonna haunt me a long time. My wife is doing her best to make it all seem less depressing, talking about how the dog is really gentle and apparently smart enough to try to avoid running into traffic, so the chances are good someone else will catch her, and hopefully have better luck getting her home. So yeah, let's hope things work out. But man, such a bummer.

Anyways.. back to baseball cards.. 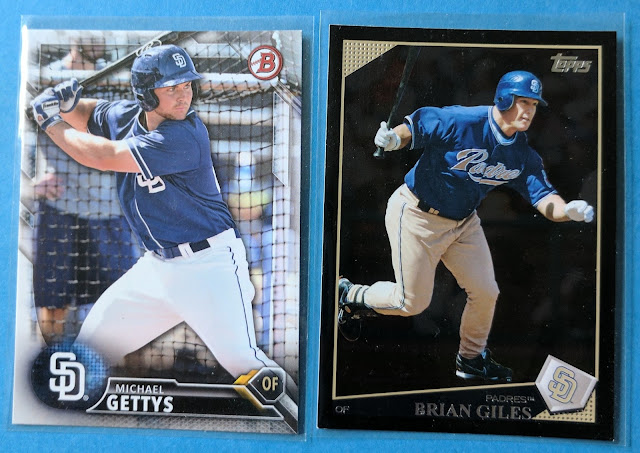 Here are a couple Padres from SCC. I hope Michael Gettys pans out, because I have a ton of his cards. And that's a cool Brian Giles back parallel.

And a trio of 1982 Kmart. A few weeks ago I went ahead and broke up the complete set I had of these (won on Listia a few years back), so I don't need them, but appreciate the thought. Really the only one I need at this point is Dick Allen with a clean back (mine has a gum stain on the back).

Thanks a lot, SCC! I'll get a return PWE out in the mail to you very soon.

Next up is the card Ken from Cardboard Hogs gave me when he ran into me at the card show the other day, as I mentioned last post. 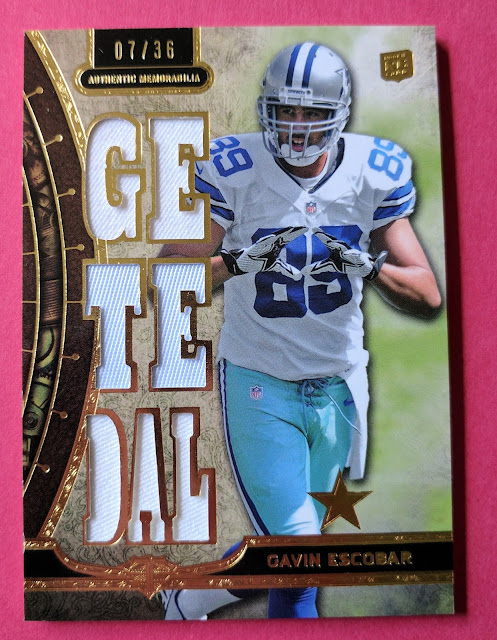 I had to apologize to Ken for not having any cards to give him back in exchange. I wasn't expecting to run into him, but have a couple Redskins set aside for him. I'll get him back one of these shows!

I'm still sorting through it, but here's a tease of the lot I got from Rod at the card show.. 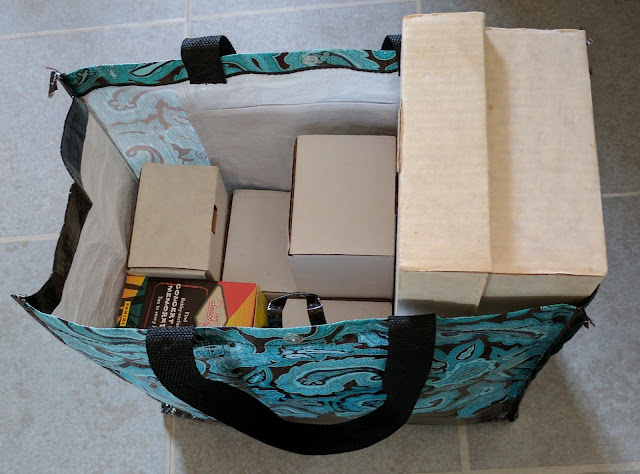 A bunch of cool stuff in there so far. Even a nice reusable bag! Stay tuned for a post covering this lot later this week probably.

Thanks a lot for reading.
Posted by defgav at 6:20 PM