The card sorting table is getting out of hand with stacks of cards. Hoping to take advantage of a (partial) snow day and get some of these put away. But not before snapping some pics for the blog first. Here are some PC additions from the couple big orders I made last month.

I filled a bunch of holes in my Bip Roberts collection, and the seller threw in a few bonus junk cards on the sides for protection. I was pretty stoked one of the bonus cards was Bip's '89 Topps Traded because for a while now I had a couple little googly eyes sitting on my desk that I wanted to stick on a dupe of this card. Now my dream is realized! This might be the funnest dang card in my collection now. 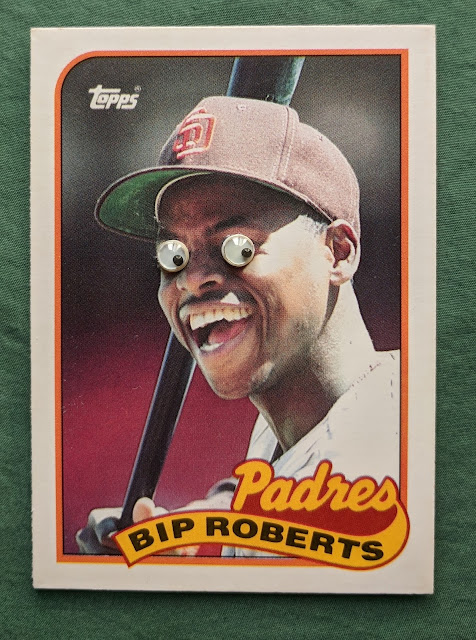 (Here it is without the animation.) 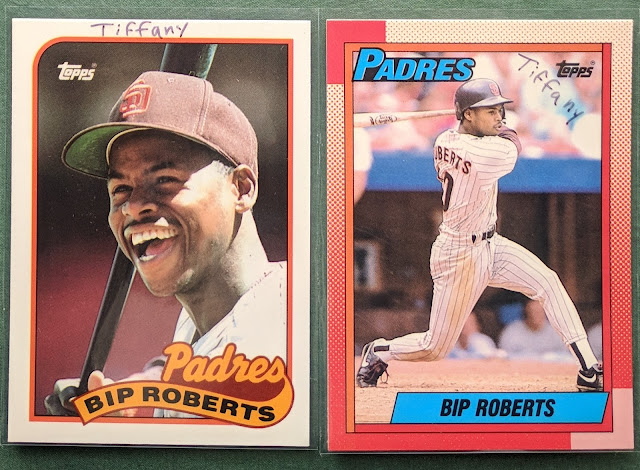 I had to be extra careful not to use the tiffany version that I had ordered from this seller. It's the same card but with a bit more gloss to it. Also picked up the 1990 counterpart. 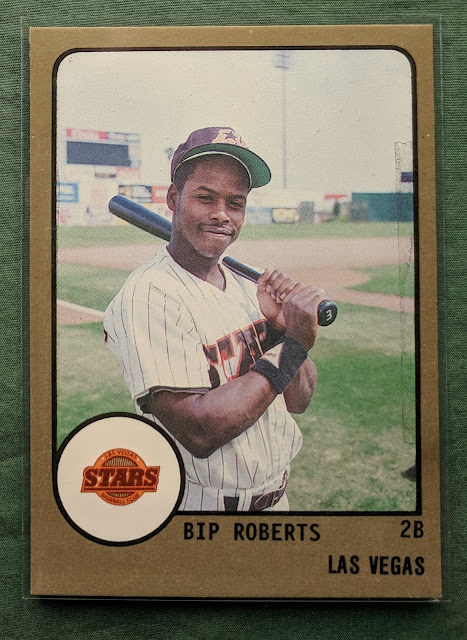 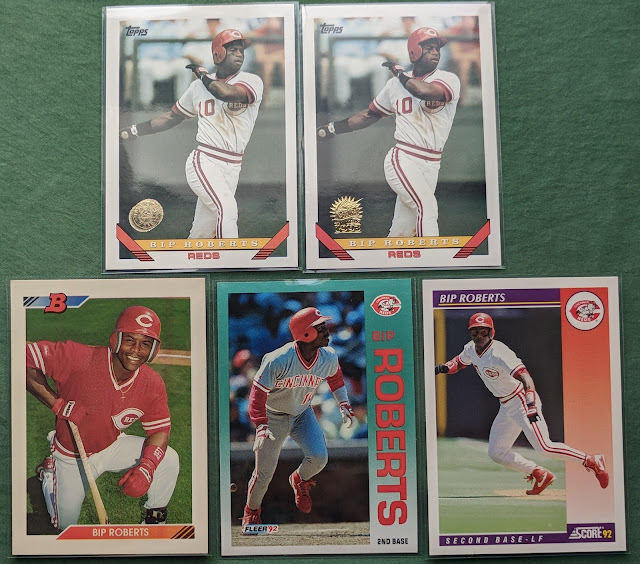 Top row are 1993 Topps "inaugural season" parallels, Rockies and Marlins, respectively. Bottom row are a few late-season 1992 offerings that I was missing. (Still makes me a little sad to see Bip go from brown to red. Padres never should have traded him. At least he would later have a homecoming double dip.) 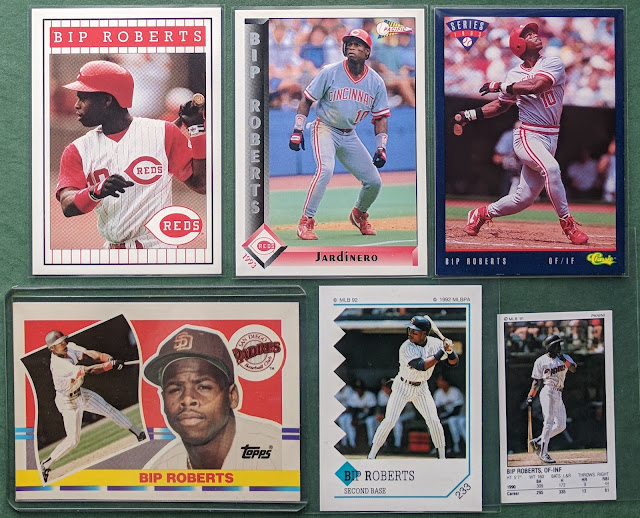 And some oddball stuff I was missing. I've still got a long way to go to measure up to the "King of Leon" binder but maybe someday. 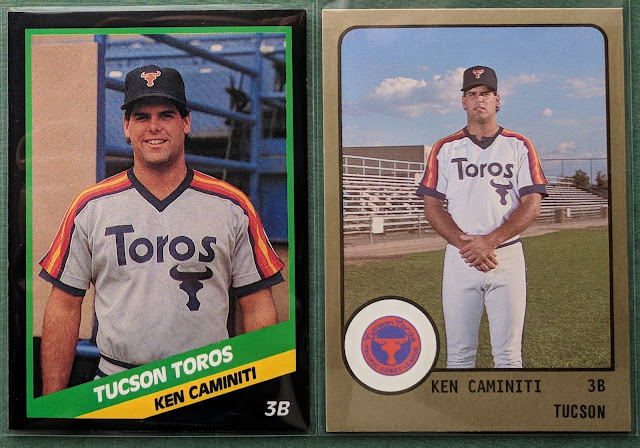 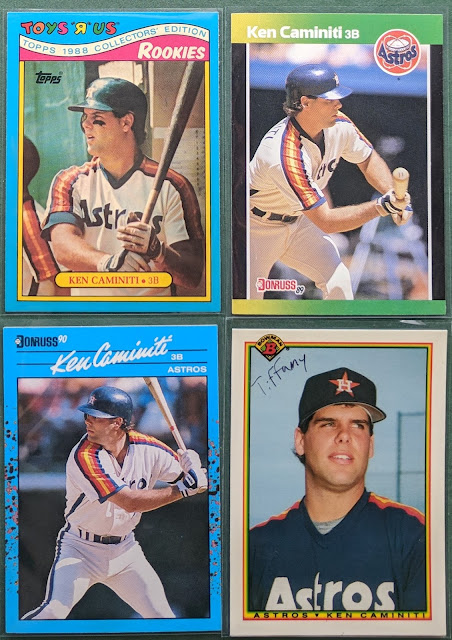 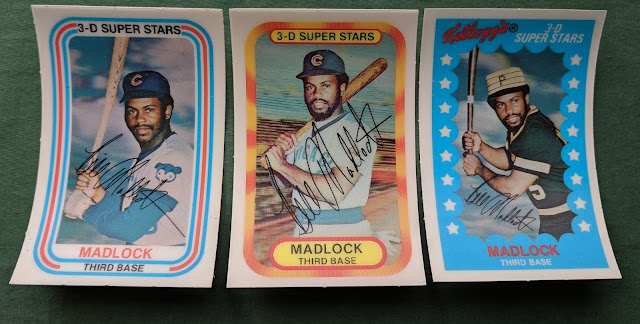 Bill Madlock is the 3rd PC guy I'll be showing off recent pickups from today. Gotta love the old Kellogg's cards in their curved glory. 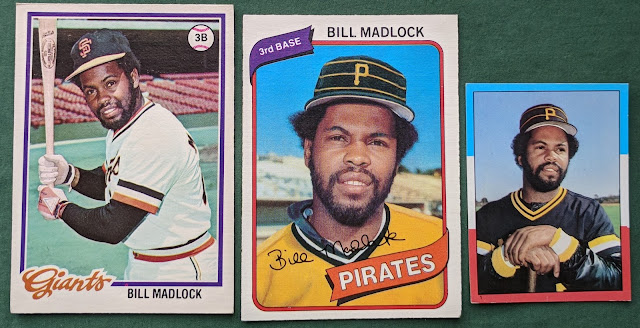 Some OPC stuff I was needing. 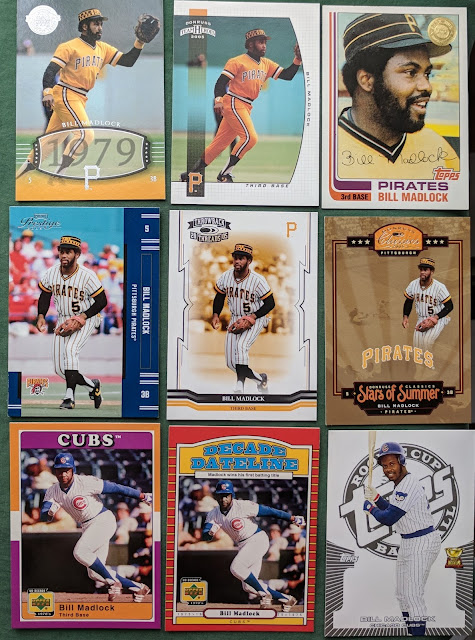 Big mix of post-career stuff. Lots of photo reuse going on here. After placing this order, I kinda asked myself, "What am I doing?" Bill Madlock has a ton of cards. I'll never get them all. I've got a very respectable collection representative of his career. Perhaps I should stick a fork in it? I'll likely try to fill a few holes from his playing days (such as completing his Hostess and Kellogg's runs), but for the most part, I think it's time to call my Mad Dog PC good and move on. 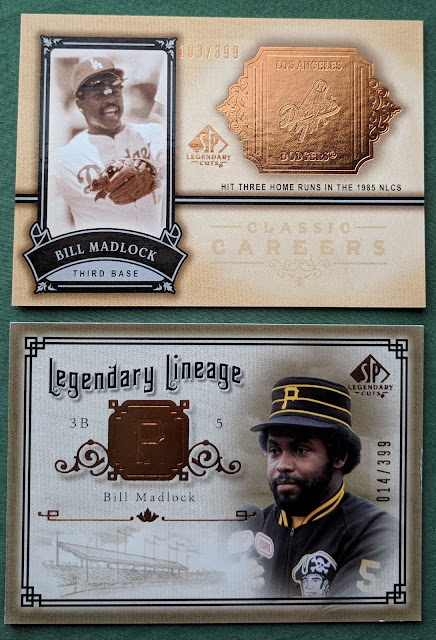 Suckered into a couple serial-numbered cards that were obviously designed for a stickergraph to be slapped on them. They'd probably look good with an IP signature. Too bad Bill doesn't do TTM these days. 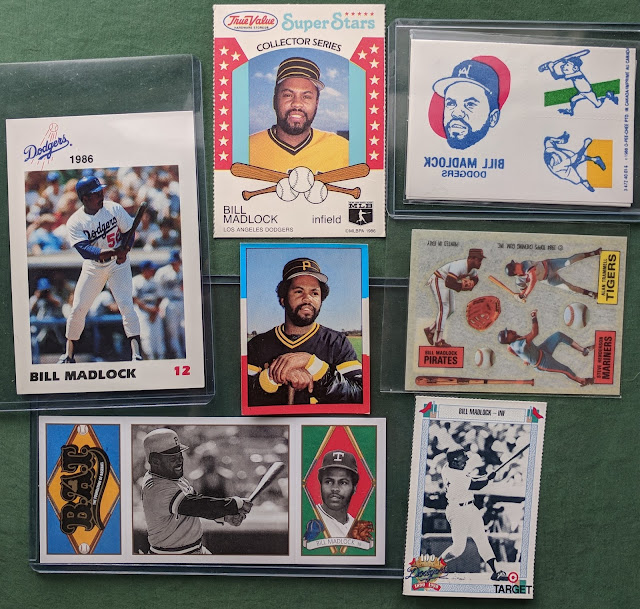 More from his stint in LA. That '87 Donruss Opening Day card nearly finishes my playing-days Donruss run for him. Think I'm only missing the Diamond Kinds corrected error now plus probably some more obscure stuff I don't know about. 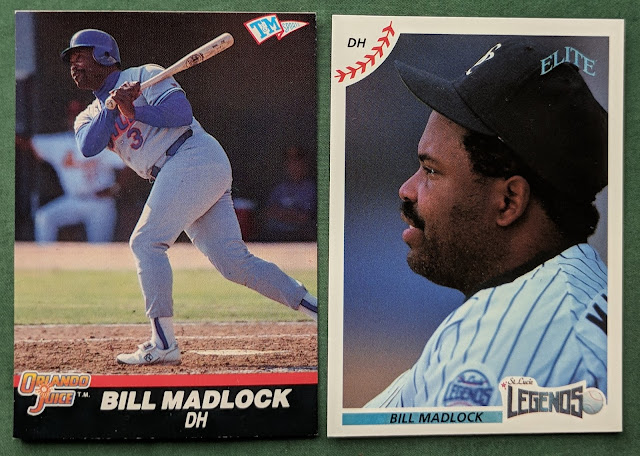 A couple cards from his twilight days in the senior league. 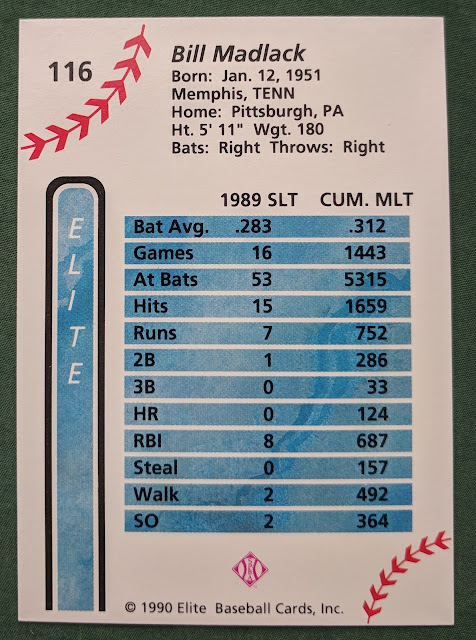 The back of the Elite '90 card is worth checking out for a few reasons. Error on the name (I'm assuming this is an UER). Also, those "CUM. MLT" (gross) totals are wrong. Those are actually his stats as they stood after the 1984 season, but he played in the majors through 1987. Weird. But what I like about the back is it shows his '89 Senior League stats, something not available on Baseball-Reference or the Baseball Cube. (Anybody know a good online source for senior league stats?) I've said it before, but as long as the players are willing to play for fun/pride (not huge contracts), now would be a great time for a senior league revival. 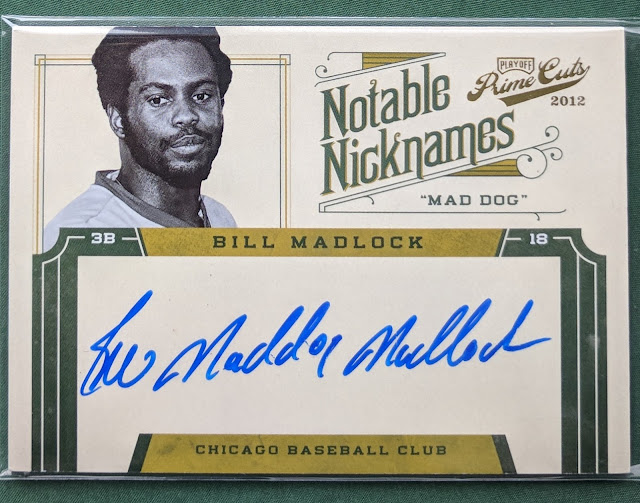 And let's close with this beauty. Not long ago, it was a white whale for me to land a Madlock auto with the "Mad Dog" inscription, and now here's my 2nd such card. Scored this in my COMC order from last November. It's #'d 49/49 on the back (eBay 1/1! Last one ever made!)

Thanks for reading.
Posted by defgav at 3:36 PM