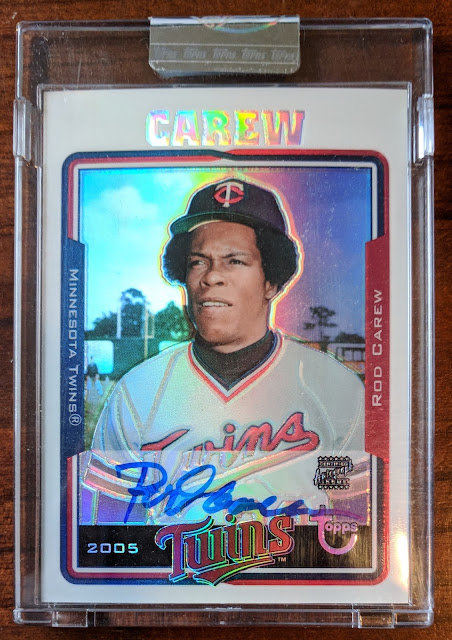 Rod Carew is one of the game's all-time best hitters. Nuff Said. I already had his 2004 Retired refractor, and now I'm happy to add the 2005 counterpart. 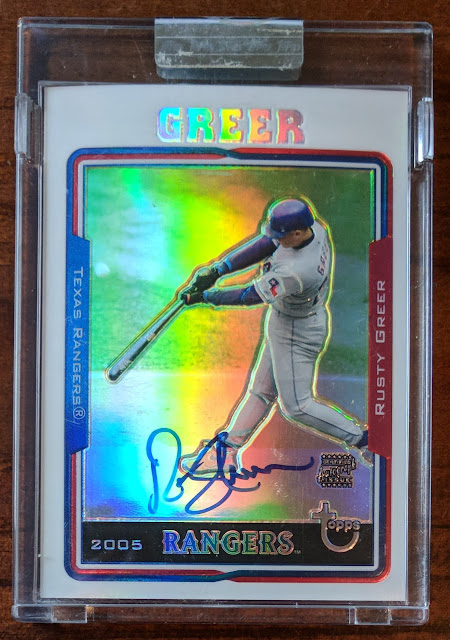 I hope Judson doesn't read this post, or he might be overcome with jealousy, as he's the cardsphere's premiere Rusty Greer supercollector. I had never even seen any version of this card before, which is saying a lot because as I've mentioned before, I'm constantly searching out Topps Retired autos. So when it popped up for a fair Buy It Now price, I jumped at it. Turns out Rusty doesn't have a base card in the set, only an auto. The base auto has a print run of 70, and per usual the refractors are /25. So even if you went all Tim Wallach Collector and tried to get every card produced of his in the product, the total would be 99 cards. (70 base autos, 25 refractor autos, and 4 auto printing plates).

The USPS put on a clinic of ineptitude with getting me this card. It left its origin in Iowa and for some reason bumped around Southern California for a few days (Santa Barbara, Santa Clarita, and LA) before making its way up to Portland, first going to a nearby but wrong post office, then back to the distribution center and finally to my local post office and being successfully delivered today.

Anyways, Greer had an impressive career and endeared himself as a Texas Rangers fan favorite, though injuries forced him to hang them up early. 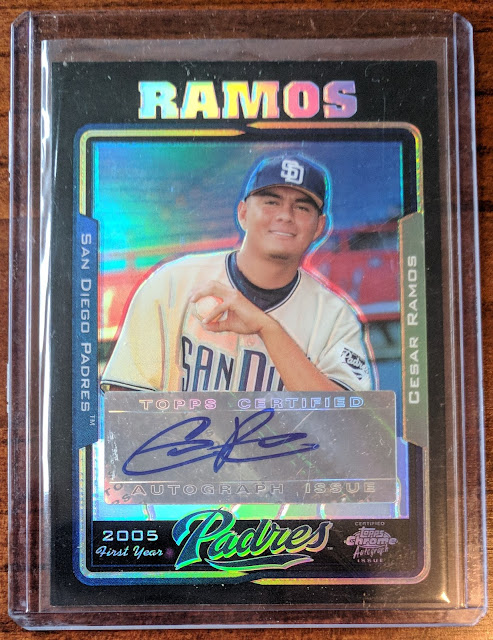 Switching things up, this isn't a Retired refractor, but rather a regular 2005 Topps Chrome black refractor auto. I'm a little bummed Topps went with white card for their autos in 2005 Retired rather than black used in 2004, as the black just looks a little cooler to me. I have no recollection of Cesar Ramos' tenure on the Padres, but he put together a respectable 8-year MLB career, mostly with the Rays. He spent 2017 in AAA with the Phillies org. Picked up this card recently due to my love for black refractors. Just cost me $2.25 shipped. /200. 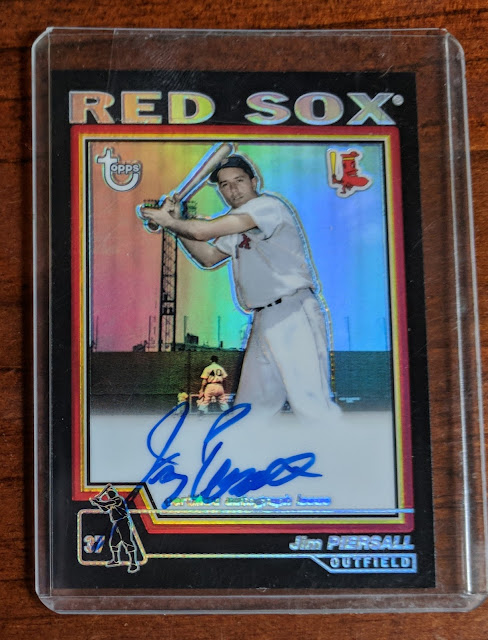 Speaking of black refractors, this is how it's done! I already had one of the 25 refractor autos of 2004 Topps Retired Jim Piersall (I've got the Christmas Card, no less!), but when this other one popped up at a fair price plus "best offer" option, I went ahead and made an offer and ended up getting it. I suppose it's trade bait (feel free to make me an offer), or perhaps I'll try to flip it for a profit. Or maybe I'll put it in my "We Didn't Start The Fire" binder, upgrading the Piersall card currently in there for the "Psycho" slot.

That's it for today. Thanks for stopping by!
Posted by defgav at 3:52 PM