T.G.I. February (Into the Stratasbeer)

I've really been looking forward to February 1st all year. After a boozy December/Beermas, I decided to dry out but cutting out alcohol all January. Apparently this is "a thing" that many people do, though I didn't realize it at the time I made the call. I nearly had a hole poked in my plan when I remembered my work's big annual party was scheduled for late January (my work goes all out for their party every year, and it's not even up for debate that I would drink at the party), but fortuitously for me, the party was then rescheduled for February, keeping my alcohol-free month intact.

My wife sort of went along with me for the month, giving up beer, but allowing the occasional cocktail or glass of wine. Maybe I'll try that next time. I thought I might lose a little weight over the month thanks to cutting out "liquid bread" a.k.a. beer, but I actually ended up gaining a couple pounds. Probably because I had a lot of fudge, brownies, cookies, etc during the month. (I never claimed this was entirely a "sober" month.. there were weekends where I had a couple bites of special brownies, something I don't normally partake in.. and it turns out I'm very susceptible to "the munchies" which caused excessive snacking and was likely a key factor with my weight for the month.) Plus, instead of beer, I'll drink sugary stuff like Hawaiian Punch or strawberry milk, neither of which is very good for you. One of these days I'll get serious about dieting and try to get back down to my ideal weight of 145. 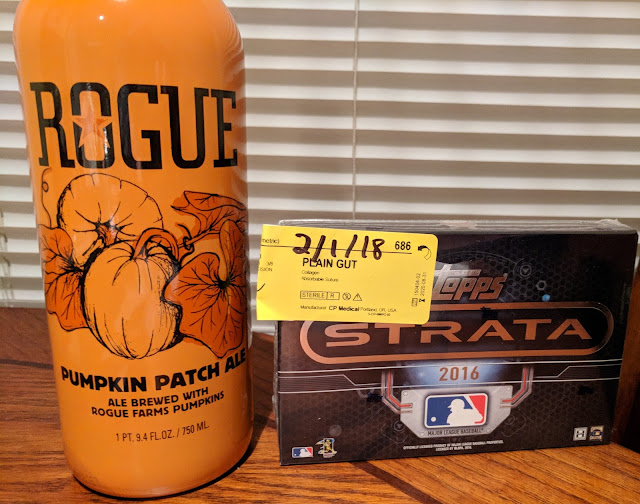 So anyways, I'm happy with my resolve of sticking to the plan, and now I'm looking forward to rewarding myself with a big pumpkin beer with dinner tonight. And of course the other reason I was looking forward to 2/1 is that I get to open my Black Friday box for the month.. and it's a good one, 2016 Strata. It's one of those risky 2-card boxes, though the price point isn't as high as a lot of what Topps has been turning out these days.. sort of a "low high end" product. Each box has one auto and one memorabilia card. Fingers crossed for something good! 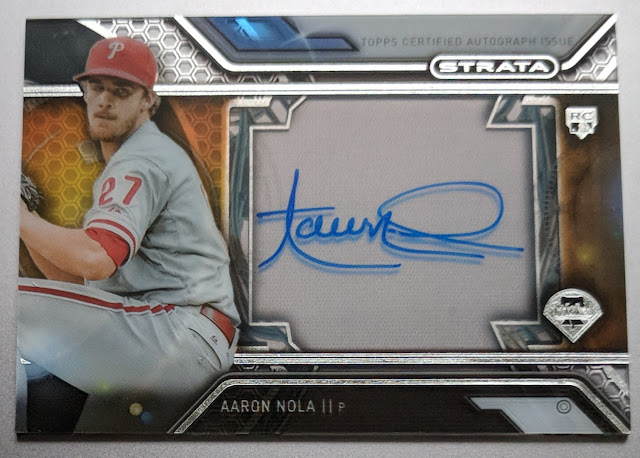 Ok, not bad. Aaron Nola is a solid young pitcher. His autographs are plentiful (I think this is the 3rd one I've pulled), but he's good enough to where I'm not complaining. Love the acetate window autographs Strata is known for. 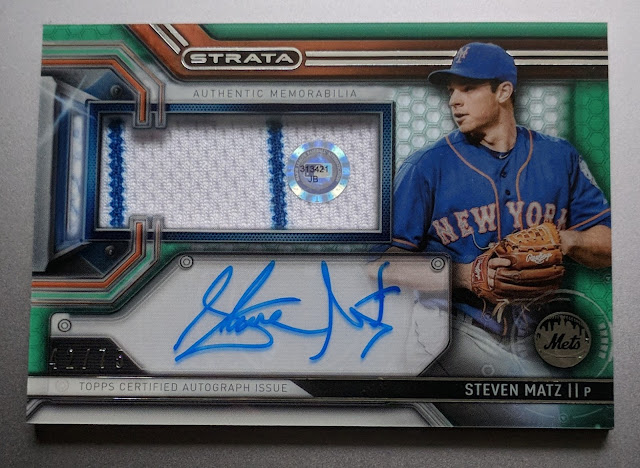 Nice! My promised memorabilia card is also an autograph! On-card too! Steven Matz is another solid young pitcher. He had a down year in 2017, battling injuries, but hopefully he comes back strong this season. Seems to be a green parallel #'d /75. The jersey features a couple nice pinstripes and has an authentication hologram. Let's look it up online to see the details:

That was the final day of the 2015 regular season. The Mets topped the Nats in a 1-0 pitchers duel. New York used 7 pitchers to shutout Washington, though Steven Matz wasn't one of them. The Mets went on to beat the Dodgers in the NLDS and then the Cubs in the NLCS before losing the World Series to the Royals.

So there you go. Nothing to be over-the-moon about, but to pull 2 autos from a box that only promises one (and neither was Henry Owens), I'd count it as a success, even if the value of the cards is probably less than half of what I paid for the box, even at a deeply discounted Black Friday sale price (a pair of blasters). Still a fun quick break.

Thanks for reading!
Posted by defgav at 3:33 PM