Been on a minor league card kick of late, specifically from the 80s and early 90s. That used to be a favorite part of my collection as a kid, but since returning to the hobby, I've only dabbled a little bit. But now I'm dabbling a bit more.

Today I'm featuring Rod Beck cards, in his "pre-rookie" days, or "Baby Beck" as I call 'em. He's one of my favorite players to collect, and somewhat under the radar since he wasn't a huge star. But with his career starting in the overproduction era, and lasting into the rise of parallel mania, it's not like I could ever dream of supercollecting up a master collection of the guy. But along with my standard player-collecting goal of obtaining 100 different cards, tracking down all his minor league cards might be more feasible of a goal. I already owned 3 or 4, and now here are a bunch more. 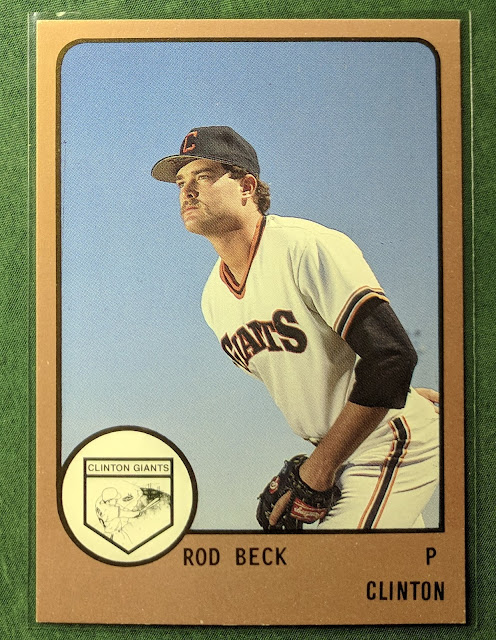 Here's my new oldest Beck, 1988 Clinton Giants ProCards #695. Oh wait, I just remembered I have another '88 card of his too. Well, it's tied for my oldest Beck card, at least. 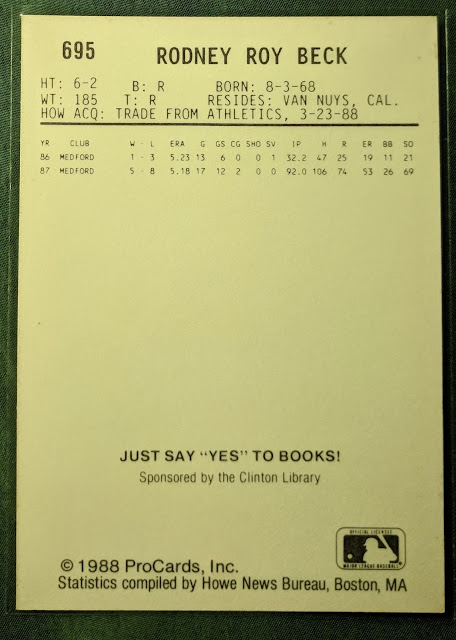 A couple things I hadn't realized (or perhaps knew but forgot), he was originally property of the A's, traded to the other Bay Area team for a pitcher named Charlie Corbell who never made it out of AAA. Unfortunately I don't think Rod got any cards from his two early years in Medford. That would have made for a neat "zero year/short-term stop"-type card to see him suited up in green.. eh, Nick?

The other interesting thing is he was a starting pitcher in the minors. He had 99 starts in the minors, and not one in the majors. I suppose that isn't uncommon for MLB relievers.

JUST SAY "YES" TO BOOKS! I love corny stuff like that on oddballs and minor league cards. 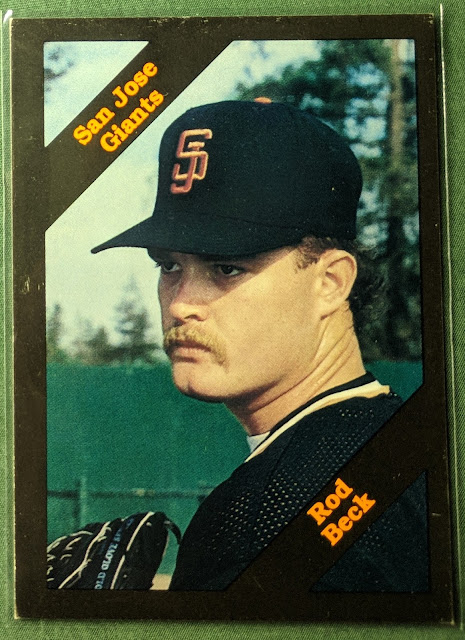 Here's a new design not previously in my collection. 1989 San Jose Giants Cal League Cards #209. Sort of a black parallel take on 1966 Topps. In this picture, Rod reminds me of my co-worker Ben (who is a skinny nerd, I say with all due respect as he's a good dude). 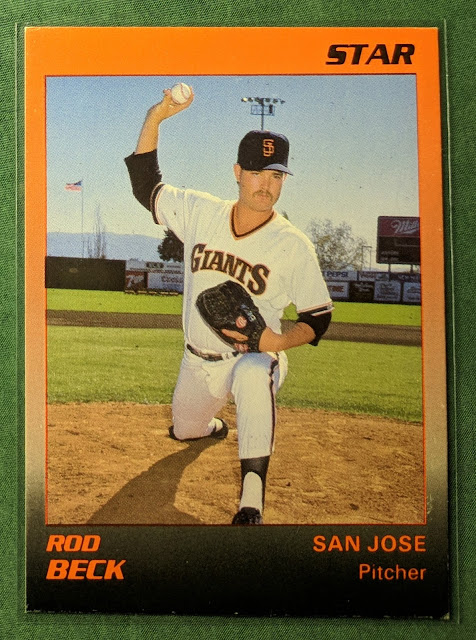 1989 San Jose Giants Star #1. This halloweeny team-set card is very similar to the his card in the larger minor league set Star put out that year with a yellow border. I already had that one and posted it in a Rod Beck PC post a couple years back. 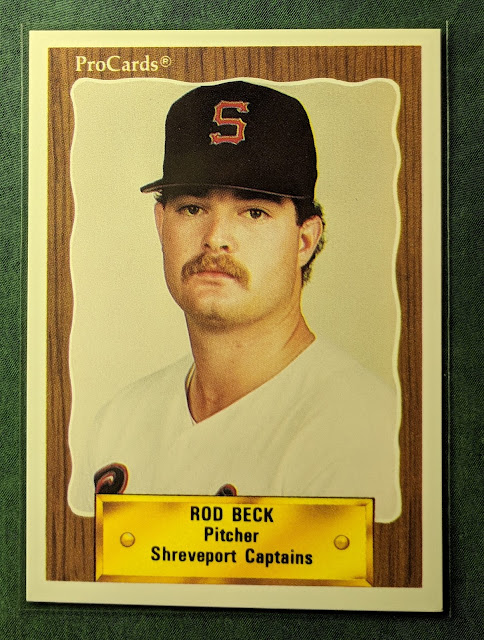 I really love this wooden plaque design from 1990 ProCards. I should whip up a custom template with it sometime.. could make for some nice-looking TTM customs. I ripped a lot of that product back then, though don't think I ever pulled this one. Were the wax packs technically a different product than the team sets? I'm still a little confused by that set and it's mammoth 2445-card checklist all these years later. I should ask that Greatest 21 Days blogger who specializes in this set (Here's his post on this card). 1990 Shreveport Captains ProCards #1435. 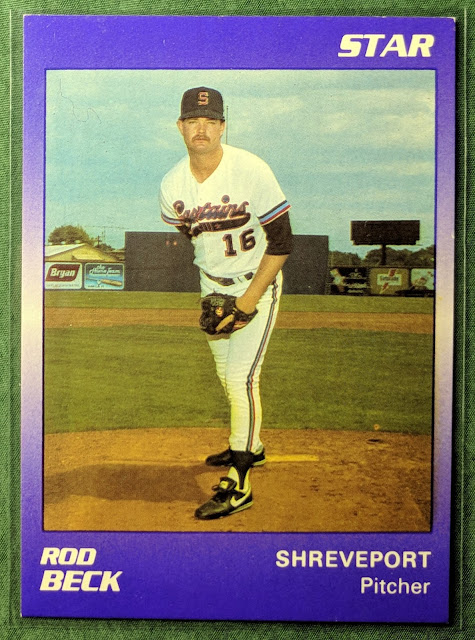 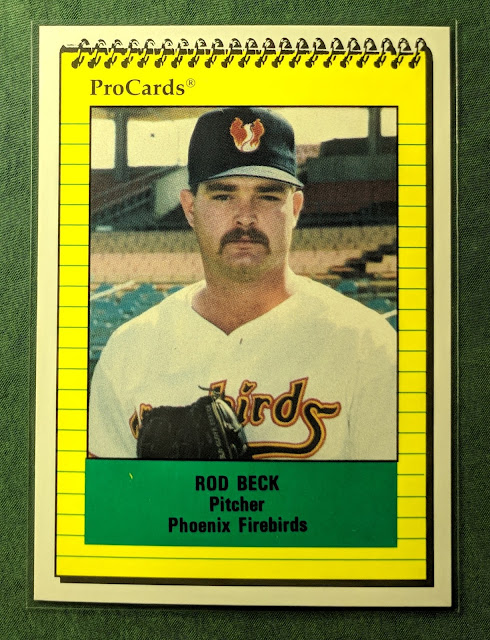 1991 Phoenix Firebirds ProCards #59. I never had much from this spiral-notepad design set, but it's pretty memorable, I'll give it that. Seems to be a nod to scouting. I wonder if scouts ever collect cards. It'd probably be a good way to get familiar with players. 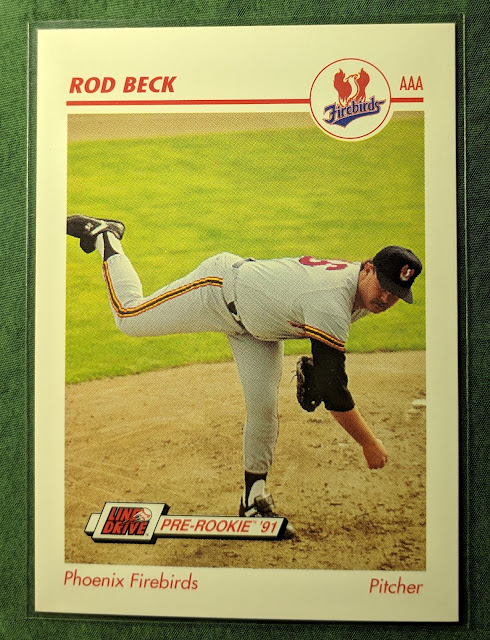 Last one. 1991 Line Drive AAA #378. This was Shooter's final stint in the minors (at least until later in his career when he hit a rough patch and had to re-prove himself). I ripped a lot of this product back in the day, but again, don't recall pulling this one. I believe AAA cards have red text, and AA have blue. I have made a template for this design, cranking out 2 or 3 customs with it, most recently a Jeter.

Checking out the Beck checklist on Beckett (try saying that 5 times fast) just now, I believe I've completed my Baby Beck miniplayercollection! Hooray! The only other minor league card I found that I'm missing is from his later-career stint with the Iowa Cubs in 2003. Now my next focus will be trying to get all his Padres cards. I don't think he has many, probably only a small handful I don't already have, but there are likely tough parallels to trip me up. We'll see. (*looks it up* Yep, the 2004 Topps Total Press Plates will prevent that miniplayercollection from ever being 100% completed. Oh well, I'll still try for all the non-1/1 cards of him in a Padres uniform.)

Thanks for reading, Nick, maybe the other Nick, and the other 2 or 3 guys who read this post, and have a great weekend, everybody!
Posted by defgav at 3:42 PM