Continuing in the series I've retroactively titled "Guns N' Randoms" where I show off some pickups that I may or may not be able to group together in a meaningful way under the title of a Guns N' Roses song, here are some various cards I've picked up recently that relate to my personal "Paradise City" hometown of San Diego/El Cajon. 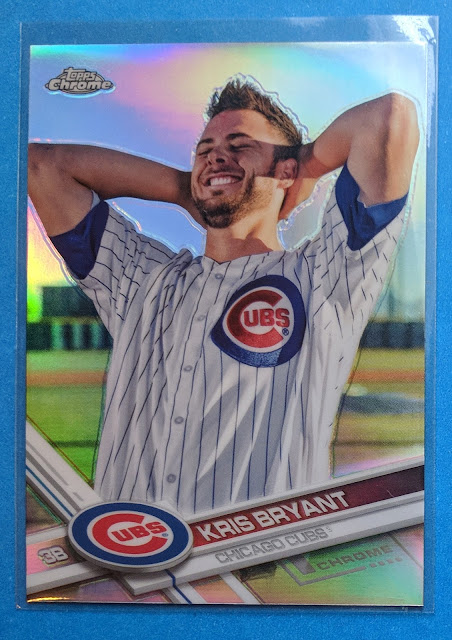 Oh won't you please take me home! I thought this risque 2017 Chrome refractor photo variation of Kris Bryant was hilarious when I first saw it making the rounds last year on Twitter, and had to include it in my latest COMC order. Here, Kris seems to be enjoying an intimate moment with the Cubs logo, or perhaps someone out of frame. Or you could look at it another way and see the design as some sort of robotic wiener. Regardless what's going on, it's a very amusing card and a nice addition to my KB PC. The pride of the University of San Diego is off to a good start this year, among league leaders in hits and average in the season's first couple weeks. 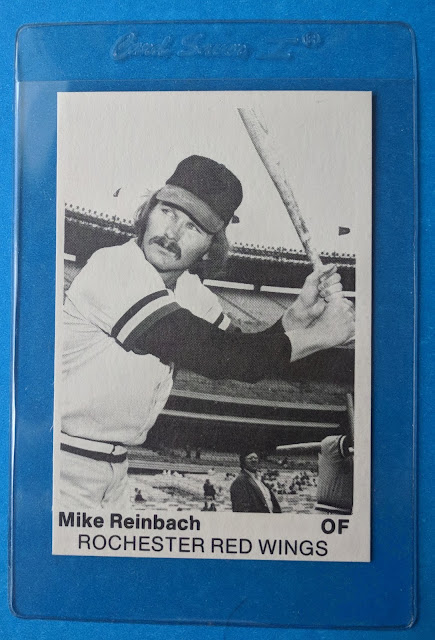 I was really happy to finally track down this Mike Reinbach minor league card last month. 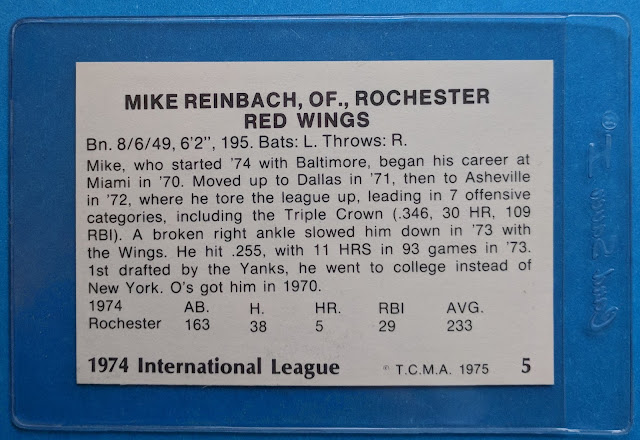 The O.G. Guy from Granite, I've made several 70s customs for him, but I believe this is his only actual playing-days card before he went to Japan and became a star over there. It's also my oldest minor league card now, put out my TCMA in 1975. 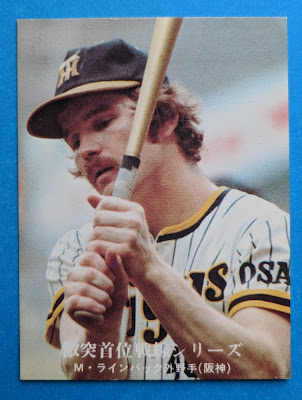 And here's a Japanese Mike Reinbach card. I actually had this one, but hey, it was an upgrade for me, plus it was probably cheapest vintage Japanese card I ever bought. Put in a low bid and ended up winning it. 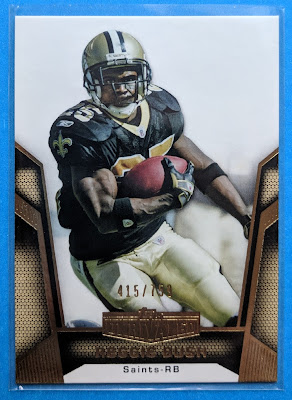 Also snagged this Reggie Bush in my latest COMC order. I think I searched serial-numbered cards sorted cheapest first, and looked for anybody I collect that I could pick off cheaply, with Helix High's Reggie Bush among the few finds. 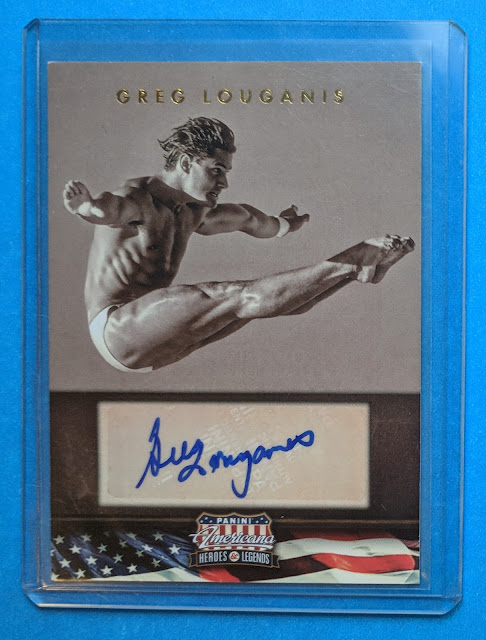 I showed this card like a week or two ago on the day I bought it, but that was a pic from eBay and felt like cheating putting it on the blog, so now that it's in hand, here's El Cajon's own Greg Louganis. 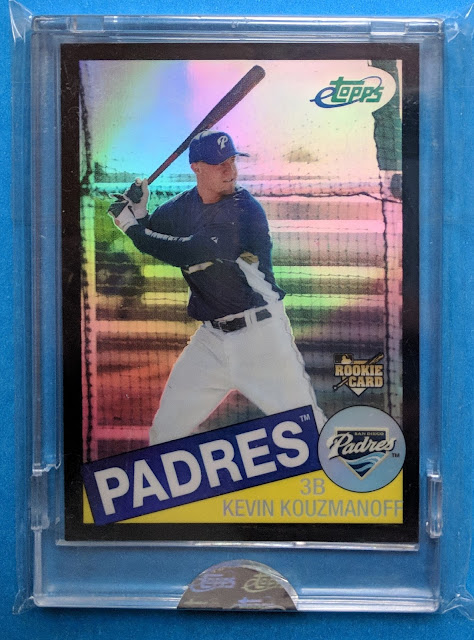 My obsession with black refractors is well documented on this blog, and I love this Kevin Kouzmanoff eTopps card in the 1985 Topps design, another COMC pickup. Kooz had 3 nice seasons in San Diego, then bumped around for a while and battled injuries before finishing with a terrific 13-game comeback with the Rangers in 2014. 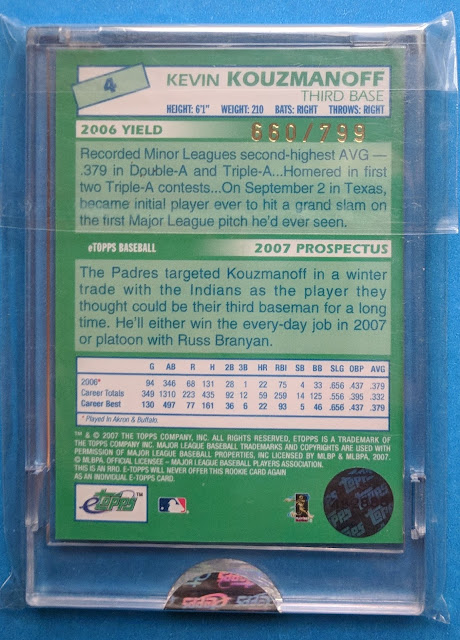 Oh! And hey, speaking of Topps revisiting their old designs, for those of you not on Twitter you might not have heard yet, but details of 2018 Archives were announced today. The cards in the base set will use the designs of 1959, 1977 and 1981. I'm very happy about this since Topps has yet to totally wear out any of those designs. Particularly 1981 rarely gets much love from today's Topps. Another cool thing about this year's Archives is it will include The Sandlot inserts, with autos, to boot. Hopefully they're not impossible pulls that Archives sometimes uses to toy with us (Heavy Metal autos, Charlie Sheen autos, Will Ferrell autos, Kevin Costner autos, etc.) Anyways, I'm excited for it and will likely pre-order a couple hobby boxes soon. 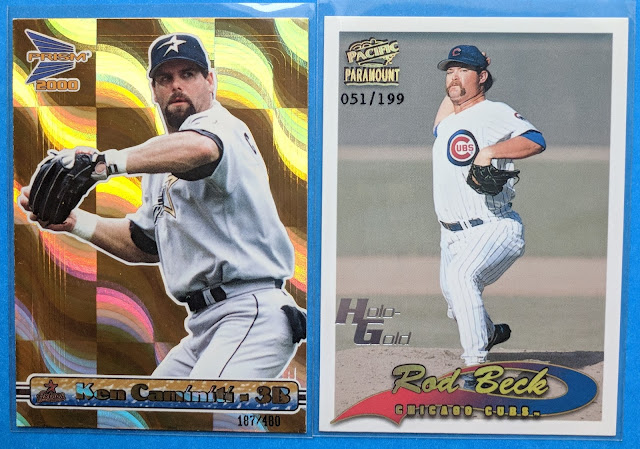 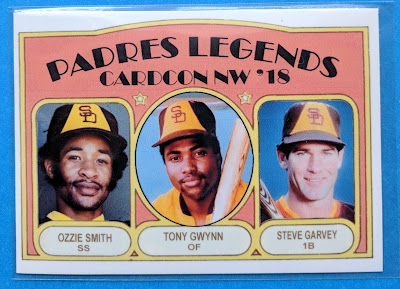 This is a special custom I cranked out for Cardblogger Con NW '18 last month. It was a coincidence that our favorite players suited up for the Padres (Kerry- Ozzie, me and Rod- Gwynn, and gcrl- Garvey). I think it makes for a nice little memento of the meetup. 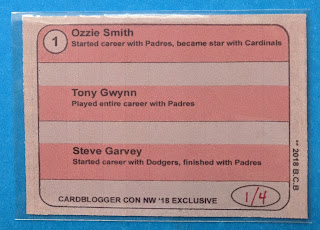 I didn't spend much time on the back, but I did hand-number them /4, keeping this one for myself. I should note that I whipped these up right before I thought to invite Ken, which is why he got snubbed (Sorry, Ken!). Had I known he would be able to make it, I might have also included Rickey in a Padres uniform, since he's one of Ken's main PC guys (I did make a special Rickey custom for him that I gave him along with a few other customs, so I don't feel too bad about the situation.)


Thanks for reading and have a great weekend! May the grass be green and the girls be pretty!

"Take me down to the Paradise City where the grass is green and the cards are shiny"
Posted by defgav at 3:26 PM